The catchphrase “Keep Austin Weird” has long reflected the eclectic and creative community that calls the Texas capital home, so it should come as no surprise that the city’s breweries showcase similarly eccentric personalities.

Everything is bigger in Texas. Long and flat road miles, smoked brisket, ten-gallon hats, and cowboy boots. But this middle ground between Southwestern desert and Southern drawl has always had a cultural heartbeat that’s “weirder” than one might expect. Austin, Texas, has—for decades—been the creative refuge for Texas misfits and outcasts—a place where abnormal was normal and where the rubber of the Republic of Texas’s libertarian live-and-let-live streak met the long hot asphalt road of creative college enclave.

Austin has—for the past thirty years or so—been the place where the creative underground of Texas (and much of the rest of the southern United States, for that matter) has gathered—audibly organizing a countercultural movement more in touch with flyover America’s reality than similar movements on the Coasts and inherently connected to a hands-on, roll-up-the-sleeves work ethic that one expects from a place carved from hardscrabble landscape.

The same inspiration that fueled Austin’s music and fine-art communities for decades took a bit longer to yield a similarly inspired brewing culture, but the past ten years have been particular good for Austin. Today, the metro area’s breweries are not just producing some of the best examples in the entire country of a variety of beer styles, they’re doing it in typical Austin fashion—with their own mix of humility and swagger plus ambitions as big as the state itself. 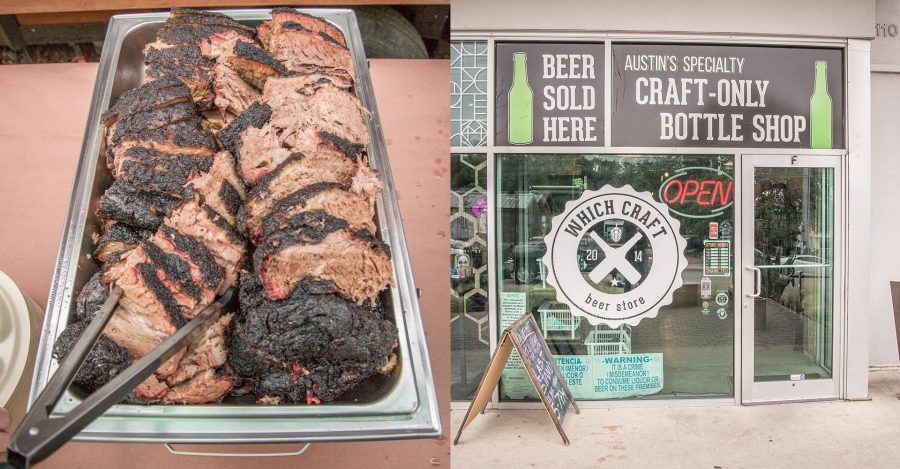 Let’s get one thing straight—Austin loves to wait in line for great stuff. It’s a strange phenomenon to be sure. While some joke about the depravity of beer nerds waiting in long lines for beer releases here and there, lines are a way of life for Austin. You want some of Aaron Franklin’s famous brisket? Better be in line by 6:00 a.m. for their 11:00 a.m. opening. Every day. This is a town where people are highly attuned to the best and seek it out with an enviable intensity.

Thankfully, the lines tend to be shorter for beer than brisket, and a great place to start your Austin tour is smack dab in the middle of everything that made Austin famous—the Rainey/6th Street corridor. For divine brisket, skip the five-hour line at Franklin Barbecue and post up at Tom Micklethwait’s joint (Micklethwait Craft Meats) a few blocks away. The meat is just as good, and the 20–30 minute wait makes it taste that much better.

But you’re not just here for the brisket, are you? For beer, bars are a great place to get warmed up. The Ginger Man over on Lavaca Street is a classic that’s been flying the craft-beer flag since 1994 and deserves quite a bit of credit for seeding the beer renaissance currently underway in Austin.

A few blocks away, Belgian-centric Mort Subite offers a tightly curated tap list of Eurocentric faves sure to please any Belgophile.

Pop over to Rainey Street next for a bit of down-home beer-garden feel. Banger’s Sausage House & Beer Garden features 104 taps, thirty different styles of house-made sausage, and a comfortable and casual beer garden (as long as you’re not visiting on a weekend evening, in which case, be prepared to wait in line). If sampling a bunch of Texas craft brews all in one place is your goal, then Craft Pride is a must-visit, with fifty plus taps of nothing but Texas beers.

Head east, and three breweries are on tap. Lazarus Brewing Co. offers a hiply familiar craft-brewery taproom with a range of styles to please any palate. Hops and Grain Brewing offers well-made beers with a definite Texas bent toward the sessionable and sensible. And Blue Owl Brewing has gone all-in on kettle souring, offering that kiss of acidity to their entire lineup of beers. 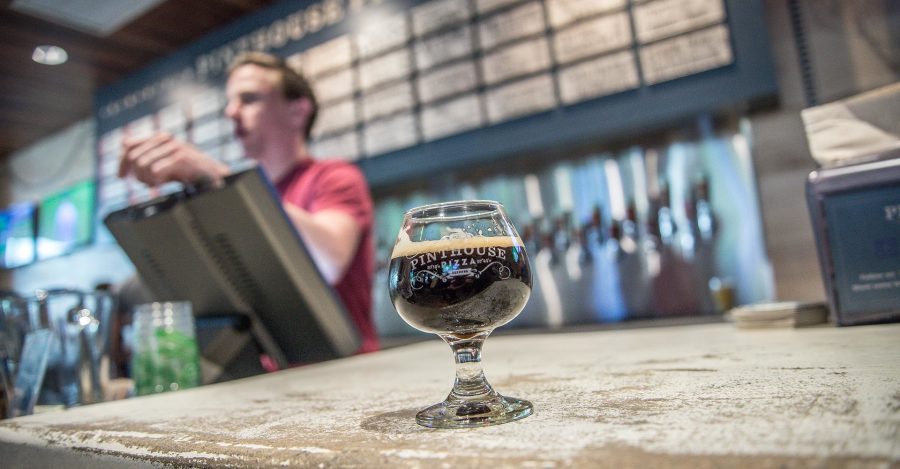 If you’re looking for swank digs for your Austin beercation, consider posting up at the South Congress Hotel. The bar is an EDM-heavy hipster scene in the evenings, but the hotel itself and the rooms offer a healthy dose of modern style and comfort.

From there, grab a seven-minute ride share to the Austin Beer Garden Brewing Company. Order an Industry Pils (or any of their many lagers, for that matter) and grab a seat in their expansive outdoor beer garden while you marvel at the odds of their winning back-to-back large brewpub of the year honors at the Great American Beer Festival. Brewers Amos and Swifty are Austin characters in the best sense of the term.

A few blocks over, on Lamar, is WhichCraft Beer Store—Austin’s go-to bottle shop for those who prefer to drink at home. Their well-curated selection and friendly staff guarantee a great beer experience, and it’s otherwise challenging to find the breadth of out-of-market beer they offer.

Next, head a bit farther down Lamar to Pinthouse Pizza and order a pie along with as many hops-forward house brews as you can legally stomach. Brewmaster Joe Mohrfeld is a bit of a hops savant, having developed his trade brewing for stalwarts such as Colorado’s Odell Brewing before landing in Texas. Electric Jellyfish is the hazy IPA you want to drink in Texas, with bright flavorful hops and the perfect amount of palate-cleansing bitterness to ensure another sip.

From there, pop over to the St. Elmo Brewing Company and order a pint of their Kölsch named Carl. The fun industrial-style taproom is made even better by the co-location of killer Asian food truck Soursop (and yes, in Austin, the quality of a brewery’s food truck is every bit as important a factor as the beer itself). From there, Skull Mechanix Brewing is a short walk, and while they’re still getting their brewing legs under them, it’s a nice open taproom with plenty of space to stretch out.

While in the area, hop over to Independence Brewing Co. and grab a pint of Stash IPA or Austin Amber.

For many professional brewers visiting Austin, Live Oak Brewing Company is their first and last stop in the city, due to its proximity to the airport. Live Oak is a brewer’s brewery, with impeccably crafted lagers, such as their classic Pilz, and what is possibly the best hefeweizen made in the United States. But in addition to these commercial favorites, Owner Chip McElroy remains committed to brewing the beers he loves—smoked beers—as he refers to their twenty-one-acre spot on the Colorado River as “Bamberg on the Colorado.” On our last visit, they offered three smoked options, including a Grodziskie and a smoked weisse, and McElroy defiantly insisted, “We’ll keep making smoked beers until people decide to drink them.” God bless you, Chip, and keep fighting the good fight. 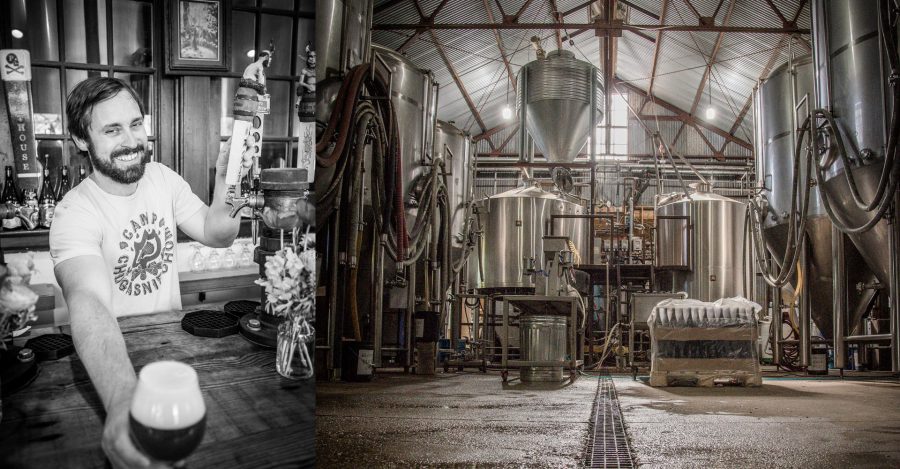 Let’s be honest—one of the single best reasons to visit Austin is to make a pilgrimage to Jester King Brewery. It’s about 30 minutes outside of Austin proper but feels worlds away as you drive through rolling Hill Country and arrive at the semirural brewing outpost and budding fifty-plus acre farm. The brewery in the 1930s steel barn feels a bit like a shrine to wild and spontaneous fermentation and is one of the most captivating destination-brewery experiences in the United States. Even if you’re not a sour-beer fan, there’s plenty of fun to be had ordering guest beers from their cooler and settling in at a picnic table under the live oaks as clouds roll over and goats graze in a far pasture.

If cider is your jam, then drive a few minutes more down the road to Argus Cidery. While they’re open only on weekend afternoons, the simple yet comfortable taproom is as Spartan yet stylish as their cider itself. 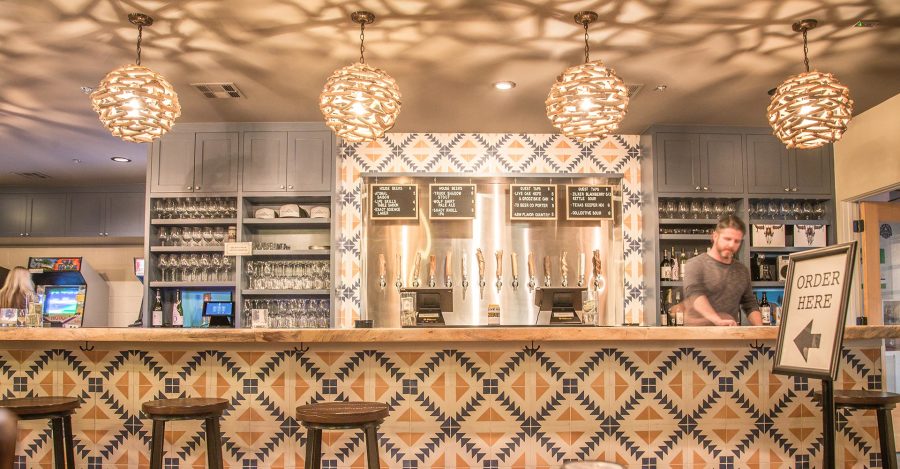 Newly opened Oddwood Ales is the brainchild of former Adelbert’s Brewer Taylor Ziebarth. The brand began as a small wood-aged labor of saison-and-sour love within Adelbert’s, and after a few years of work has finally become its own stylish brewpub with a Southwestern country feel. The beers—mixed-fermentation saisons, progressive lagers, and hazy flavor-forward hoppy beers—are as refreshing as their departure from the standard brewery-design menu of barnwood walls and steel-pipe fixtures. It’s a comfortable and warm place to spend an evening, made even more friendly by a simple bar menu of thin-crust pizzas.

Pierre Celis is renowned for “saving” the classic witbier his hometown of Hoegaarden was known for, all the way back in the 1960s. After selling the brewery to Interbrew (now part of multinational conglomerate AB-InBev), he alighted in Austin and launched the Celis Brewery to share his witbier recipe with the Americas.

While the complicated history is too much to cover here, after the brand passed through a variety of corporate hands, it was eventually shuttered until Celis’s daughter Christine regained rights to the brand and relaunched the brewery in late 2017. The new-look Celis is familiar yet fresh, and the beer tastes better than ever, making for a beautiful comeback story. Stop by the new brewery taproom and enjoy Celis White as fresh as you’ve ever been able to drink it.

For another quick Belgian-beer fix, stop by Adelbert’s Brewery. With everything from kettle sours packaged in cans to shareable wood-aged sour beers in 750s, as well as non-sour Belgian-style brews, they’re sure to scratch that sour itch.

The launch of Oskar Blues’s Austin outpost was a bit controversial for locals who didn’t take kindly to the Colorado brand moving in on their territory, but it’s an easy stop for fans of the brand, and they’ve accurately cloned the slightly shabby industrial feel of their Longmont taproom. Plus, locals now have access to their barrel-aged taproom-only releases.

Last stop in North Austin has to be Austin Beerworks, one of the cooler modern beer gardens in town (if you haven’t noticed, the city has a lot of beer gardens, which makes for much more social drinking than the small tasting-room format we find in many other parts of the country). Their fresh approach to bending styles in the service of flavor is welcome, and the beers don’t disappoint. Order a Pearl Snap Pilsner, a Peacemaker golden ale, or Fire Eagle IPA, and toast your visit to Austin, Texas—the shining star of the lone star state.

Horchata Stouts: Ready for a Close-Up

Brewers on the pastry-stout kick are looking for new sugary veins to mine, and it seems like they've gone south of the border, incorporating the flavors of a long-beloved sweet drink.