With each new release in their sour IPA program, the brewers of Hudson Valley Brewery are bringing converts into the fold. They are blending down from an acidic beer base, going strong with botanicals, and using hops that convey more than just bitterness.

The word sour, especially in beer, conjures up many flavor memories. Sometimes it’s puckering, other times just pleasantly tart, and still other times it can be candy-like sweet. IPA, on the other hand, brings to mind bitter, floral, fruity, or earthy character, as well as an unmistakable aroma that often brings a smile to a beer drinker’s face. Put sour and IPA together, and it can be easy to imagine the combination … unless you’re visiting the Hudson Valley Brewery in Beacon, New York.

In the 2 years since Brewers and Co-owners Mike Renganeschi and Jason Synan, along with business partner and Co-owner John-Anthony Gargiulo, joined forces to open the brewery in the area of the Empire State that has become the premier brewery destination, they have turned the notion of sour IPA on its head and directed it toward a bright future. Thinking about most of their beers as a triangle, they want to focus on acidity, hops, and botanicals.

However, each characteristic doesn’t play the traditional role in their beers that one might expect, and that’s exactly how the brewers want it. On a recent winter morning, they gathered inside a small office just off the brewdeck. Speaking over the din of a roaring boiler, Renganeschi and Synan exuded real excitement when it comes to talking about the beers they create, even if they are guarded now and again when it comes to process.

Acidity came first for them. It’s what they wanted to build their beers around.

“Then we started to experiment with fruits and hops and things and started to realize that it was more than acidity; it was a balance of acid and sugar, a balance of acid and hops, a balance of acid and pretty much every other thing in beer. We started so small and had such limited resources, and it’s fair to say that we weren’t very good brewers,” says Renganeschi. “Our beers weren’t coming out with the right gravity that we wanted. We didn’t have any of those specs locked down, so we went to the process of blending because we needed to make the beer we wanted to make without the tools necessary to make it. We were able to then think of individual beers as components coming together to make a final product.”

To that end, the brewery makes a beer called Acid Beer that on its own is too acidic to drink. Dozens of barrels that line the walls of the brewery inside an old factory just off the main drag in Beacon are marked with the name, showing just how important the beer is to the everyday magic of Hudson Valley. It’s then combined with a beer that has a higher gravity until the brewers find “the sweet spot.”

And just what is that? It’s a finishing gravity of a milk stout but the acidity of a Berliner weisse, they say. But, it’s a moving target because as they use more traditional blending techniques with contemporary recipes, they need to constantly make adjustments.

The beers are big on oats and wheat and are typically dosed with a healthy amount of milk sugar, all contributing to body, boozing up the flavors of the beers, and allowing certain ingredients to shine at different times. One interesting by-product is how the hops present in their IPAs. It’s normal to expect something called a double IPA to be hops-forward, but in many cases for their sour IPAs, the hops impart a fruity character, but little else until the very tail end of the finish.

“I think it takes a little while for hops character to come out in our beers or for people to find it in our beers, and it’s a deliberate part of the whole picture of our beer,” says Renganeschi.

Synan hopes that 2019 will be the year that the brewery is able to focus on botanicals with a greater degree of concentration. For certain series, such as their New York farmhouse series, they want to use locally grown ingredients. But for everything else, they’ll source from wherever they can, and there isn’t a worry in those instances of seasonality. Because they are so adept at blending beers, they can build on a recipe over time, using what’s available at the time and then adding to it later with different examples, such as in a recent strawberry basil beer. The fruit portion was done first, but the herb was added months later, closer to release.

“It is challenging, and we do have a lot of misses that don’t make it to a can,” says Synan. He pointed to a fennel pollen beer that “wasn’t good,” and that’s the risk they take. They are happy to dump a beer rather than tarnish their reputation. 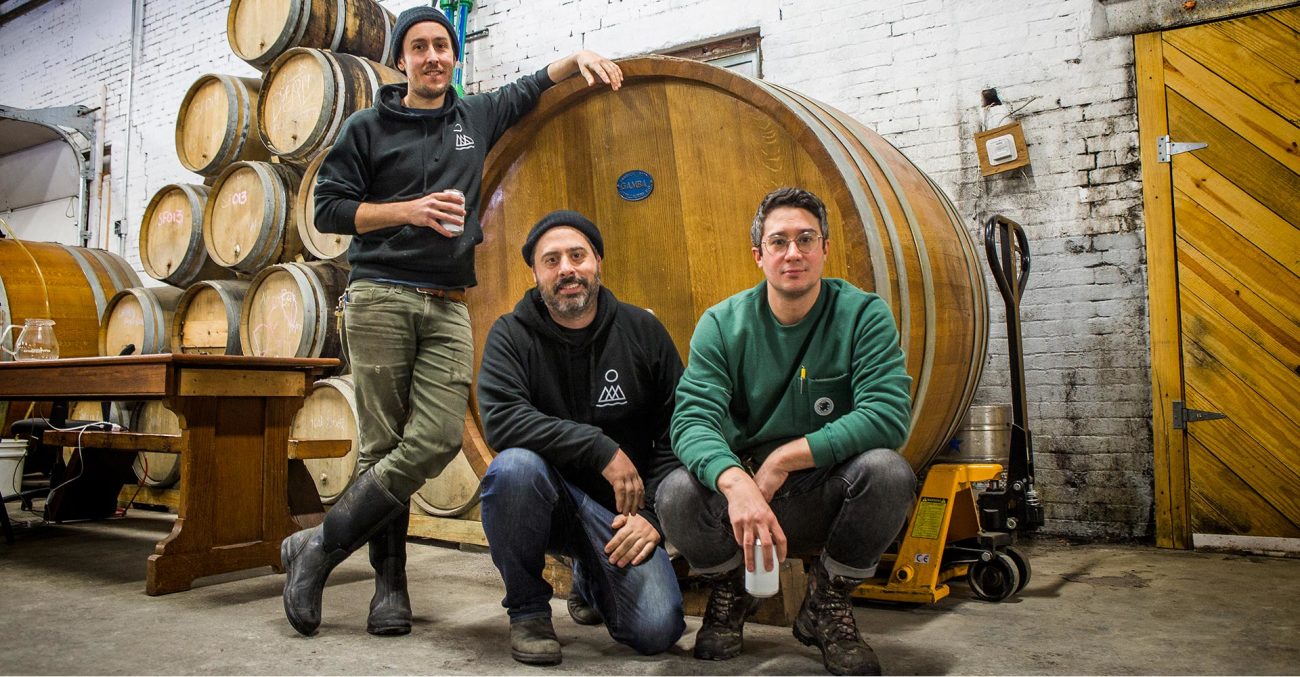 The brewing duo started homebrewing while Renganeschi was a master’s student at the State University of New York in New Paltz, brewing on the front porch of a house Renganeschi was renting. Synan was managing the bar at Bacchus, a restaurant down the street.

“I like to build everything out and tech everything out, so I had the traditional 5-gallon cooler mash tun and welded little things that my friends helped make for kettles,” says Renganeschi. This was 2009, and the two were drinking good beer, inspired by the recipes being turned out in the American resurgence of sour beers, IPAs, and more. They were drawn to the beers from Jolly Pumpkin Artisan Ales (Dexter, Michigan) and Anchorage Brewing Company (Anchorage, Alaska).

The owners of the bar saw the passion that the two were bringing to beer, not only with what Synan was bringing in to sell, but also with what Renganeschi was brewing himself and sharing around. So, they approached the two with an offer to install a 3-barrel system in an unused walk-in cooler behind the restaurant’s kitchen. Inside that 200-square-foot space, the two started to experiment with recipes, developing some of the recipes that their brewery today is known for and that people line up for during weekend can releases.

“It’s a matter of technique and process,” says Renganeschi. “We learned how to brew professionally on that system with limited means. We didn’t have a lot of equipment or resources to bring to bear, but we had an idea of what we wanted to make and what we developed at that time informs what we make today.”

A Bit of Nostalgia

It’s not uncommon for breweries to offer tasting notes when promoting their beers. More often than not, there will be straightforward descriptors such as grapefruit, chocolate, coffee, flowers, and other items derived from the beer’s main ingredients. At Hudson Valley, the beer descriptions verge on the bits of fun childhood that many us experienced.

The pair says the descriptions are born out of “tasty Tuesday” sessions where the staff and others taste finished beers. There isn’t an intent, in the way some brewers have, to mimic a flavor in advance, but that comes later. It’s a fun way to connect with fans and also helps bring new drinkers into the fold by offering specific, familiar flavors.

When you’re more than 2,000 miles from the nearest country there’s a tendency to rely on all things local. That’s what Batch Brewing Co., a Sydney, Australia brewery has in mind when it is creating recipes.