Growing your own hops isn’t always as simple as planting, harvesting, and brewing. For those who want to get deeper into the science, leading to a more fulfilling brewing experience, here are the steps you need to estimate alpha-acid percentage.

Whether you’ve grown your own hops or you have brewer-gardener friends sharing theirs, making beer with homegrown hops is a treat. It’s easy to use them as flavor or aroma additions, but bittering is a challenge because they don’t come labeled with their alpha-acid percentage (AA%). If your harvest is big enough, you could pay a lab to analyze the hops, but that doesn’t feel very “homebrew-like.” That’s why most people just wing it with a recipe and see how it turns out, likely taking at least a couple of batches to get a feel for the hopping level.

If you’re thinking, “There’s got to be a better way,” you’re absolutely right.

The trick is using hop teas. Brewing and comparing teas uses much less of your valuable harvest, and you get the results today instead of weeks down the road, waiting for a test beer to finish. On the surface, it’s a pretty simple idea: you just need to compare your homegrown hops with some known quantities. But the devil is in the details.

A couple of things are obvious, though. First, although tasting for bitterness is subjective, IBUs should serve as the basis for calibration. Also, honing in on the actual AA% will require an iterative process. Before I explain the steps, let’s break down the process. If you suffer from math-phobia, this shouldn’t be too scary, but you can always trust the simple formulas and skip down to the basic overview.

Before looking at the numbers, I made some simplifying assumptions about the hop tea so it would be easy to make and use and also plug into the IBU calculations. I opted for a one quart (946 ml) batch of tea with a specific gravity of 1.023 using table sugar. The sugar affects the hop utilization, but it also softens harsh notes from the bitterness that might be distracting. A quart is small enough to cool quickly while still allowing reasonable weight measurements.

Rather than try to tease apart Tinseth’s complex equation for calculating IBUs, I opted to run some numbers to get a feel for how AA%, the weight of the hops in grams (Wt), and IBUs were connected. It turns out that the relationships are close enough to linear. When I graphed out AA% vs. IBUs for a couple of weights, the lines were almost parallel, just like the relationship between weight and IBUs for a couple of different AA% values. That suggested an approximate formula that was fairly simple:

When I went back over the initial numbers, it turned out that 2.387 is a good value for C.

If you have two of the values in that formula, you can find the third with some algebra: 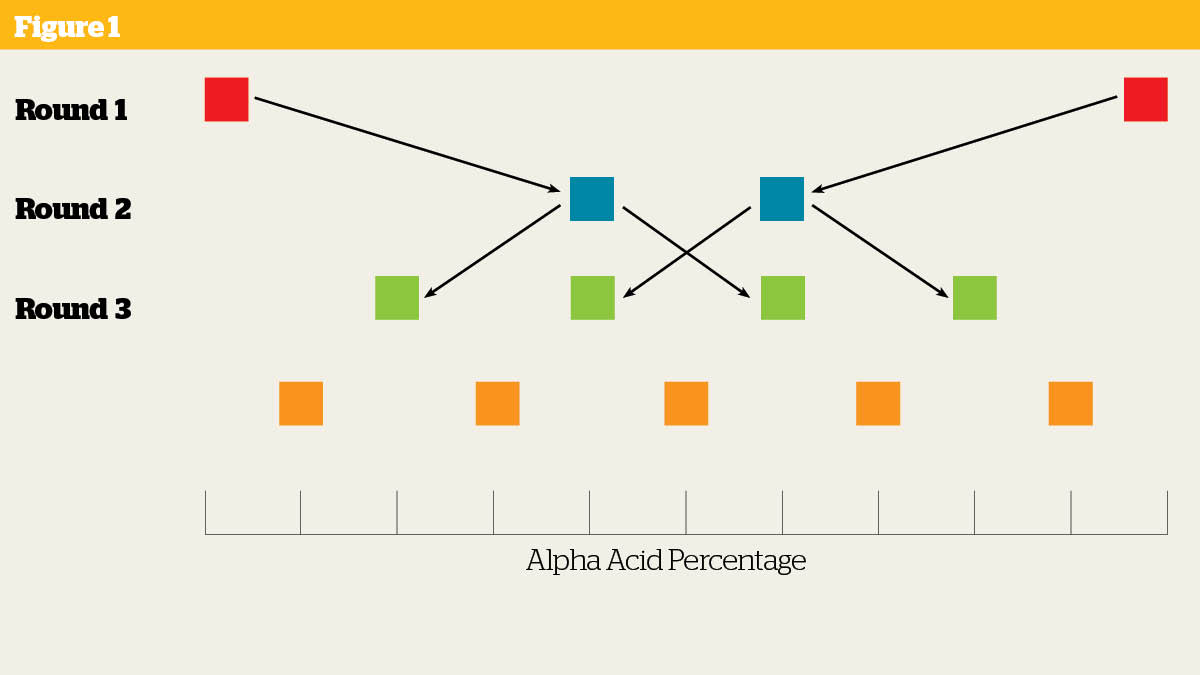 With the formulas in hand, we can start the process for estimating the AA% by comparing the bitterness of a tea made from the homegrown hops with a couple of teas calibrated to a known IBU level on either side of the homegrown hops on the AA% scale. Each round will either match or get closer to the homegrown tea. If it doesn’t match, you’ll have enough information to refine your estimate and make the tea for the next round. Each round reduces the IBU spread, so the estimate gets closer. Assuming your starting guess, based on the variety of the homegrown hops, is in the ballpark, three rounds will give a good estimate.

Figure 1 shows how the tasting rounds narrow in on the AA%. The dots in each round represent the calibrated teas that we’ll compare with our homegrown tea. Round 1 shows the two endpoints in red, which are a full percentage point apart. For round two, our calibrator will be one of the two blue dots, depending on which calibrator seems closest (follow the arrow). The round 3 calibrator will be one of the green dots. By that point, if the calibrator doesn’t match exactly, it should be only about 0.1 off (see the orange dots).

To start, you’ll need to supply two details: an initial guess for the homegrown hops AA% and the AA% of the control hops used for calibration. The control hops should be as low as possible in AA% because that provides finer granularity of IBUs while keeping 0.25 gram precision in our weight measurements.

For illustrative purposes, we’ll start with an initial guess for homegrown Cascade hops of 5.5% AA and use 3.2% AA Tettnanger hops for calibration. 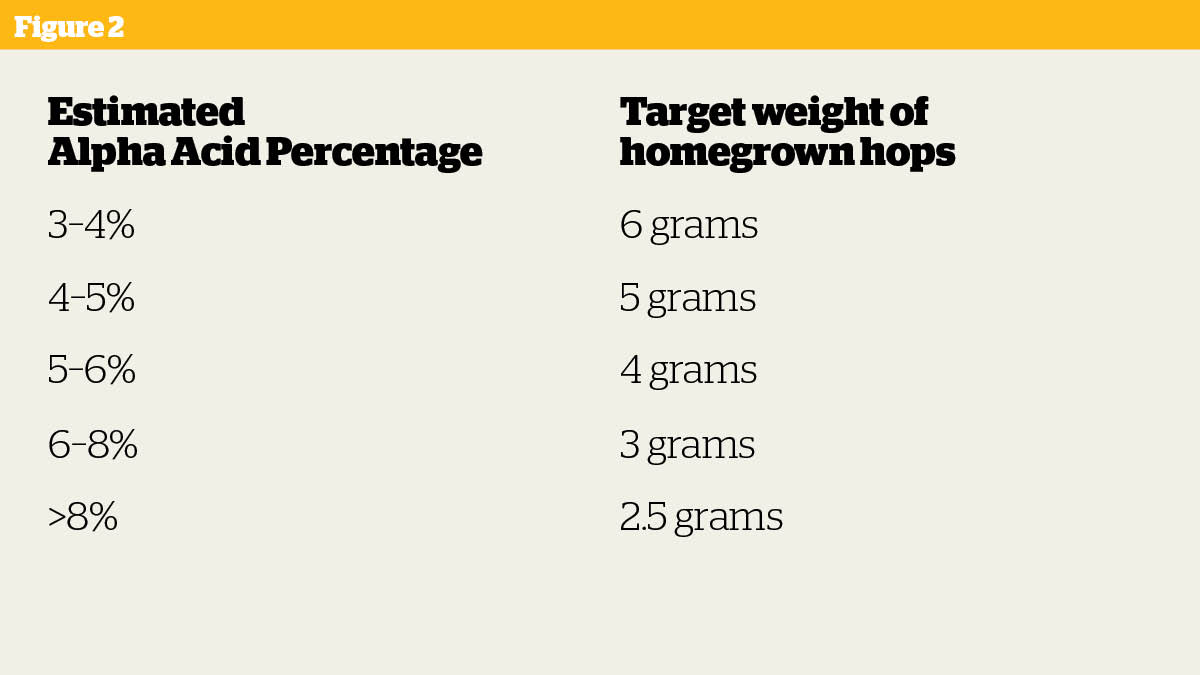 IBU sensitivity covers a range from 4–9 IBUs at the low end to 80 or so at the high end. We want to keep the hop teas well within that spread, focusing on 40–60 IBUs, if possible. The table in Figure 2 offers a guide for the weight of hops, so the homegrown hop tea will fall in that range.

In our example, our initial guess of 5.5% AA gives a target weight of 4 grams of homegrown hops.

Make each tea following the same process: add the appropriate weight of hops to a quart of water, along with 2 ounces (57 g) of sugar, and boil for 30 minutes. Cool the tea as quickly as possible—I recommend using your freezer.

If you’re lucky enough to get a match, all you need to do is calculate the actual IBUs of the sample, which might be different from the target because you rounded to the nearest 0.25 gram. Once you have the actual IBUs, you can convert back to the AA% using AA% = IBUs / (Wt * C). Assuming that calibrator1 matched, the two steps would look like this:

The worst case is where the homegrown tea is skewed more or less bitter than both calibrators. If so, you’ll need to shift the endpoint up or down a point and go back to step 2. For example, if the homegrown tea was less bitter, your new range would be 4.0% AA–5.0% AA.

Round 2 If you need a second round, you’ll use the earlier calculations for target IBUs and calibrator weight to get the information you need to brew a tea for calibrator3, based on the target AA% you figured out at the end of round one.

Round 3 The third round works just like the second. At this point the difference between the calibrators will be small enough to fall right in between if they don’t match exactly.

A key point that you may have glossed over is that your calibration hops should have as low an AA% as possible to permit fine-grained control of hitting the target IBUs. With higher AA% hops, small weight differences grow into wider IBU spreads.

Don’t be put off by the formulas with strange constants or the weird rules for picking calibrator AA%. In practice, you’ll brew at most four calibrator teas to narrow down on the right AA%. In many cases, two rounds (three calibrator teas total) will get you close enough. Along the way, you’ll get a better sense of your hops, beyond just the bitterness, and you’ll never have to wonder about what you should do with homegrown hops again.

Patrick Rue, founder of The Bruery, is always trying to learn more and find new ways to bring new flavors to his beer. He sits down for a wide ranging conversation with John Holl about education, bottle societies, ownership, and much more.