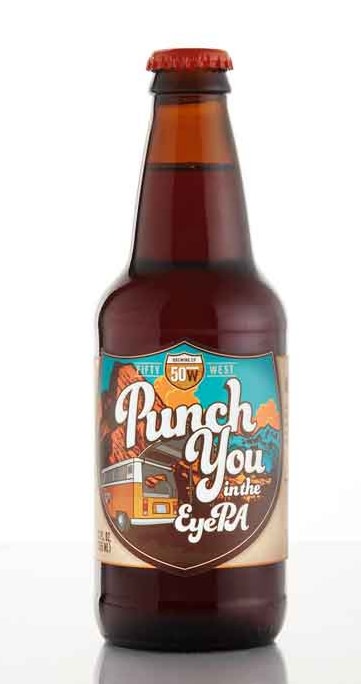 50 West Punch You in the EyePA

“Ever been punched in the face with a fist full of hops? Well, pucker up because you’re about to take one straight to the kisser. This brew isn’t a love tap; it’s a haymaker.”

Aroma: “Cracker-like rye and grains up front with a medium hoppy dank note and pear and apple esters. Fresh bagels with a low to moderate orange citrus. It’s slightly soapy in that intense floral way.”

Flavor: “Moderate hops flavors with juicy peach notes, candy sweetness, orange, and pineapple, like orange marmalade. A big bread flavor with medium rye spiciness and a touch of caramel. A mustiness gives it an almost mushroom-like earthiness. The hops bitterness and rye create a spicy, bitter finish, but the bitterness is on the low end for how much heat is in the finish.”

Overall: “If the hops were fresher, they may have come together more, but they’re a touch muddy and muted. The rye character comes through but is not particularly featured. There is a lot going on in this beer with the malt depth, sweetness, and hops, but it’s so much as to border on overwhelming.”