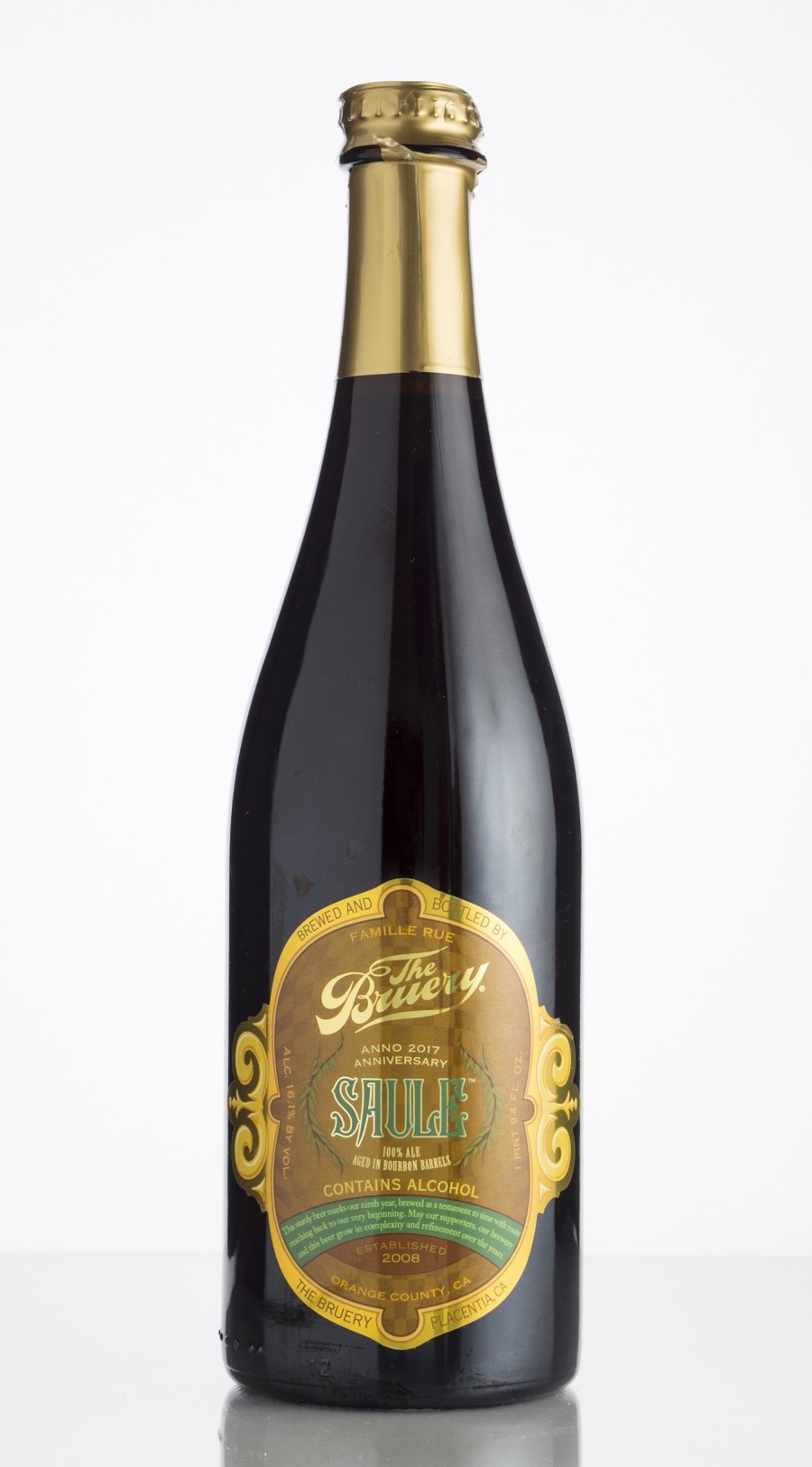 “Our ninth anniversary ale, Saule, follows in the footsteps of our anniversary releases before it, which are loosely based on an English-style old ale, fermented with our house yeast strain, aged in bourbon barrels and blended using the solera method.”

Aroma: “Spiced apple cider with caramel sauce (and a shot of whiskey). There’s a lot of barrel character up front, and the malt is behind that with caramel and toffee. Some raisin, moderate plum, light pear, a touch of cherry and molasses.”

Flavor: “Very, very rich. Malt and whiskey, and barrel characters with oak and moderate fruitiness of cherries, lemons, dates, and raisins. Big dark chocolate flavors complemented by moderate molasses and a light malt sweetness. The alcohol is omnipresent and amplifies every other element of this rich and luxurious beer.”

Overall: “Decadent—a perfect beer for sharing. This is a big complicated caramel, molasses, dark chocolate, malty goodness of a beer, and I’m a sucker for big and complicated beers.”

Introducing Cinnamon Dolce Nitro Stout—an instant Firestone Walker classic made to warm your soul for the fall and winter seasons. In the words of Brewmaster Matt Brynildson, “We reimagined our signature nitro stout into something entirely new and seasonal, accentuating the beer’s rich, chocolaty malt character with real cinnamon spice and premium Madagascar vanilla beans. The result is an amazing harmony of flavors that cascade along a smooth, creamy texture.”

This beer taught us that patience truly is a virtue. KBS is a big imperial stout brewed with a massive amount of coffee and chocolate and then bourbon barrel–aged to perfection. Incredibly silky and full-bodied with notes of vanilla, cocoa, roasted coffee, and charred oak.

Twobular is a truly progressive West Coast–style IPA brewed with a range of advanced hop products. In addition to lots of conventional hop pellets, we used varietal hop extract and a special cold-processed hop distillate! Hop aroma to the max!

Get ready to bask in the glory of the frothy head’s floral bouquet. Relish the citrus accents from the abundance of dry hopping. This one’s sweet, yet balanced. Malty undertones shake hands with the hop character for a finish that never turns too bitter.

Make way for the Big Little Thing, a 9% ABV imperial IPA flexing a full malt body and mega-tropical hops, yet its sweetness is tame, and the finish is clean. Dry-hopping during active fermentation sparks biotransformation: yeast cells alter the chemical compounds in hops to unlock entirely new aromas—like the notes of mango, grapefruit, and tangerine billowing from Big Little Thing.

Experience the phenomenon known as Mind Haze—a juicy, hazy, tropical IPA done the Firestone way. In the words of Brewmaster Matt Brynildson, “We use our own distinct mix of grains to achieve a classic hazy mouthfeel with incredible freshness. We then abundantly dry hop the beer with New Age varieties to create an explosion of tropical fruit character.” Discover why Mind Haze has taken the craft-beer world by storm.

Two Roads is driving a tanker truck down the road less traveled with this Pineapple Mango Gose. We kettle soured this ale in our own tanker truck trailer—a former milk tanker that’s parked on the grounds of our brewery. Pineapple Mango Gose has a rich blend of tropical fruits with notes of pineapple, mango, and guava. With pleasing tartness, it’s a tropical twist on a refreshing gose.

You’re going to need a bigger suitcase—All Day Vacay has arrived. Take a well-earned respite from the mundane and let this session wheat ale whisk you away with its slight, summery sweetness—complemented by delicate notes of citrus. Whether it’s a staycay or vacay, it’s the perfect companion for any type of adventure.