A stronger and darker Anchor Christmas Ale is here to help us try to forget about 2020. Here, Anchor’s brewmaster explains the thinking behind this year’s recipe and label.

Arriving like a balm after a difficult year, the 46th edition of Anchor Brewing’s annual holiday warmer is its darkest and strongest yet. It appears on the watch of a new brewmaster, Tom Riley, who took over in August to become only the fourth there since Fritz Maytag took the helm in 1965.

Anchor always keeps this recipe under wraps, but Riley was willing to discuss some aspects of this year’s formulation. The 2020 Christmas Ale is a robust but balanced porterish brown ale of 7 percent ABV, which—based on my own tasting notes—has an accent of woodsy, juniper-like spicing. That spice is evident in the nose but doesn’t dominate the flavor, which is quite smooth, softly roasted, and drinks well below its strength.

CBB// I think a lot of people realize the Christmas Ale recipe changes every year, but I’m not sure how many of us have a broader sense of how it’s evolved. Please tell us about how the beer has changed over the years.

TR// In 1975, former Anchor brewmaster Fritz Maytag had the idea to release a limited-edition holiday brew with an ever-changing, top-secret recipe that would stir excitement each year. We have been widely considered the makers of America’s first craft beer, the first modern American IPA, and the first porter, so Fritz wanted to add to that list with the first hand-crafted holiday beer in America.

With the beer’s closely guarded recipe, he was determined to create a fun mystery for people to look forward to every holiday season, with Christmas Ale. Along with the ever-changing recipe was a hand-drawn label of a tree that changed every year, which has been designed to reflect the current times. Over 45 years, those aspects have remained the same.

You can clearly see the difference between our 1975 and 2020 editions if you set them side by side. In the 1970s, Christmas Ale was a pale ale. Our 2020 Christmas Ale is firmly a spiced brown ale. You can certainly tell that we have experimented with more exotic spices and hops over the years to arrive at the darkest Christmas Ale yet, with the highest ABV at 7 percent.

CBB// Specifically, with the 2020 edition, what’s different this year from past years?

TR// Christmas Ale delivers a new taste every year. Our spice blend is constantly evolving based on what Anchor fans love, as well as the current times. In recent years, you can taste more exotic spices and flavors of resinous pine.

In 2020, however, it made sense for us to arrive at a more traditional and approachable spice blend with a large malt build. We peeled back some of the spice layers of recent recipes to create a subtly spiced brown ale with a more silky and chocolaty malt, bursting with classic holiday flavors that remind us of a different time—when it was normal to spend this special season with a multitude of friends and family. The 2020 Christmas Ale is an easy-drinking winter warmer for a year that’s anything but traditional.

CBB// This is your first year brewing the Christmas Ale as brewmaster. Did you already have ideas in mind about how it might be tweaked on your watch? Or, did this difficult year have an impact on the recipe—i.e., after 2020, maybe we could all use that extra ABV kick?

TR// When our previous brewmaster [Scott Ungermann] left in August of this year, the 2020 Christmas Ale had already been settled on, and we were beginning to brew. As assistant brewmaster during that time, I had a big part in developing the beer, so I already knew what we were trying to do. With such a difficult year, we figured it only appropriate to dial up the ABV and the comforting flavor notes.

CBB// What advice would you have for other brewers out there, for brewing a great holiday ale—whatever that means to you?

TR// There’s so much more that goes into the process of brewing a holiday ale than just flavor. It’s often said that the holidays are the greatest time of year, but it is also a difficult season for many, especially during a pandemic. As Christmas Ale is only available for a short time, we want it to carry as much significance as possible.

Create a label that fits in with the current times and inspires beer drinkers. For instance, this year our hand-drawn label shows The Three Graces, a trio of sequoia trees that symbolize joy, hope, and flowering. During a year when so many of us were forced to spend time apart, we wanted our holiday ale to represent togetherness. Make a beer that pays homage to the year and can bring people together. 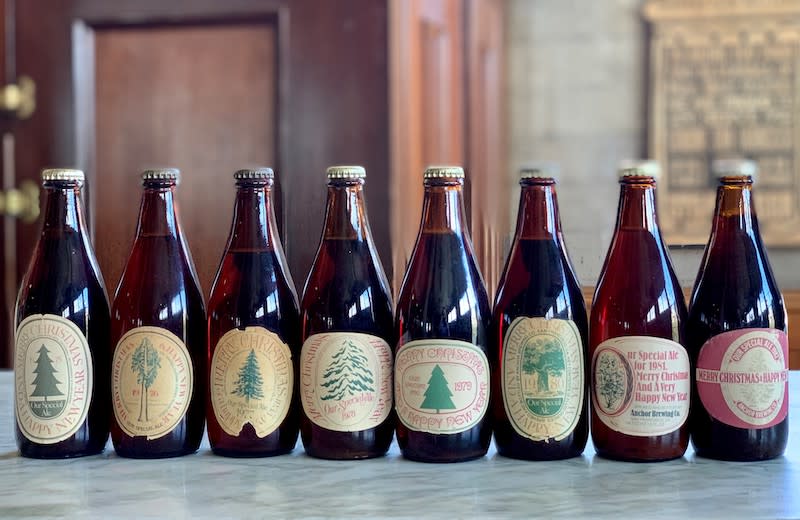 Spice is not Necessarily Nice

If you want to brew in honor of the holidays, consider the flavors and the feelings of the season. Here are a set of ideas that you can mix and match to create your own tradition.