As a serial entrant in major beer competitions, Brink Brewing in Cincinnati, Ohio, has been winning national medals with classic styles, turning them into local success.

Cincinnati-based Brink Brewing Co. had been open for only eight months, but Kelly Montgomery had no qualms about entering his beers into competition at the 2017 Great American Beer Festival.

“That’s my Super Bowl trophy,” says Montgomery, cofounder and head brewer. “I don’t care about much else.”

His ambition was no surprise to his business partners, most of whom are family and knew his long-standing penchant for entering brewing competitions. (His English-style dark mild, Hold the Reins, took home a GABF gold medal that first year.) Beginning in his homebrew days, Montgomery had a lofty and, by his own admission, “weird” goal: to win a homebrew medal in every style of beer. Once he medaled in one style category, he’d move on to the next.

That goal was perhaps unrealistic, but it served Montgomery and Brink well. His technical mastery of varied styles is racking up the medals: Besides a World Beer Cup bronze in 2018, the brewery has won four golds and a silver across three GABF competitions. That helped earn it GABF Very Small Brewery of the Year honors in both 2018 and 2019, an unprecedented back-to-back title.

It’s also proven useful at the brewery’s College Hill taproom, where 20 taps pour a rotating menu of classic and contemporary styles, making it one of the most diverse tap lists in town. 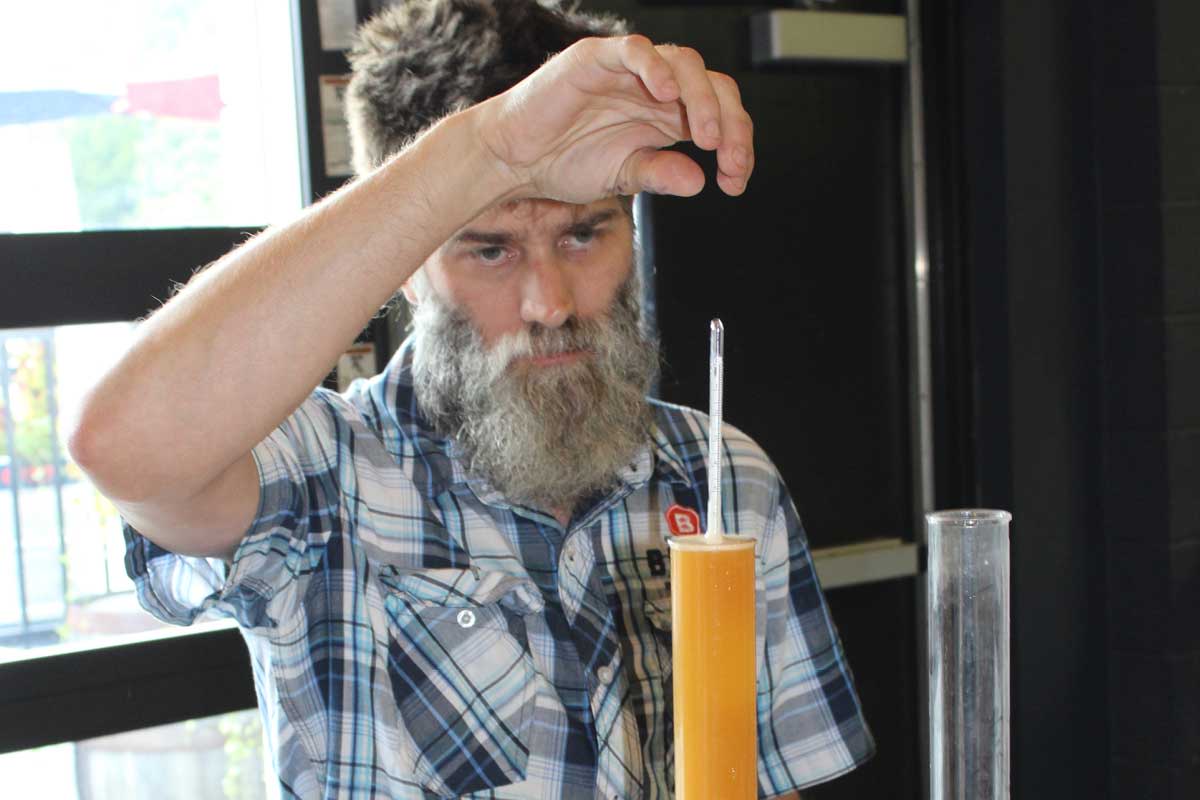 Nailing so many varied styles, Montgomery says, comes down to using authentic ingredients—only German yeast, grain, and hops in his German styles, for example. He also credits the relentless tweaking of his recipes during his homebrewing period.

“That really helped later on, being a pro brewer, when you’re brewing so many different styles all the time, and you don’t always have a chance to re-brew a beer,” Montgomery says. “Sometimes you only get one shot at it.”

Hold the Reins, his dark mild, went through numerous iterations as a homebrew before it became the medal-winning powerhouse it is now. When he began brewing it, Montgomery says, it couldn’t win an amateur competition. He began improving it through easy fixes, such as buying a brewing hose to replace the plastic garden hose he was using to fill brewing buckets. Then he read a Gordon Strong book and began examining each step of the brewing process more closely: adding roasted grains later in the mash to reduce astringency and adjusting the water chemistry and pH to better replicate British styles.

The transition from homebrewing to professional brewing adds a further challenge that has nothing to do with technical specifications: how to sell sometimes under-loved classic styles, such as dark milds, grisettes, and milk stouts, alongside a lineup of cocktail-inspired beers, candy-bar stouts, and IPAs. Montgomery has help in that realm from Brink’s Denver-based cofounder and marketing and design chief, Sara McGarry, who is also his sister-in-law.

“For our English mild and the milk stout, obviously the medals have made marketing those two easy,” McGarry says. “But we just released a grisette that’s a more obscure style, so first it’s about educating customers. In every social-media post, it’s saying this is what this style is, this is what the ABV is, and giving some story about it.”

Montgomery says breweries shouldn’t underestimate the potential that classic beer styles have to set a taproom apart. For example, many customers Brink serves have never tried a bière de garde before. That offers a chance to make a once-in-a-lifetime drinking memory for a customer.

Left: The Brink fermentation cellar. Right: Barrel-aged Duncan Clan is an ode to their Uncle Jack, who passed away from cancer in 2017.

Brink also enlists the homebrewing groups to which Montgomery once belonged to help spread the word about some of these lesser-known styles. He often invites area homebrewers to a brew day, hoping they’ll spread the word when that beer hits the taproom. When the beer debuts on draft, Brink invites those homebrewers back for a ceremonial tapping that helps drum up interest.

One classic, though, has become an instant hit for Brink with very little marketing required: its 13 percent ABV barrel-aged English barleywine, Kelly’s Candy.

“I didn’t have anybody in the neighborhood who’d heard of a barleywine before we brewed one, and now they all love Kelly’s Candy,” Montgomery says. “Everybody knows the days we’re releasing that. Everybody was locking up their children; everybody’s wives and husbands were chatting about how they’d deal with ‘this barleywine thing.’”

McGarry and Montgomery say brewing beers that run the gamut from helles lager to mango-habañero IPA has been central to Brink’s ethos since Day One. It’s partially inspired by their uncle, Jack, who traveled around the world as a specialty printer repairman, collecting global beers to take home to his family from his travels.

“Jack would crack a bottle, and you’d sit around the table and talk for hours. We wanted that to be the experience for any customer, that it was really comfortable, that it wasn’t intimidating,” McGarry says.

With three years of local and national success under its belt, Brink is now looking to the future. The brewery does have plans to grow, but they’re modest. Brink produced 780 barrels of beer in 2019, selling 90 percent of that through its taproom, with hopes to increase that to 1,000 barrels this year. That may require adding a few accounts, as well as expanding the brewery’s bottling operation. Brink hosted seven bottle releases last year but hopes to increase that to 20 in 2020—while still hand-bottling each one. (Friends and neighbors often volunteer to help in exchange for beer.)

The brewery also plans to use the space it’s leased next door to expand its barrel-aging program and launch some oak-aged mixed-fermentation beers. Montgomery admits that given all the styles he’s brewed at Brink, true mixed-fermentation and fruited sours have mostly been outside the brewery’s scope, until now.

No doubt Montgomery will continue to enter Brink’s beers in competition, too. Some might question the rationale behind spending time and money not just entering beers at GABF but pouring from a festival booth as well. But Brink says there’s plenty of value in those national awards and festivals, even for a brewery that doesn’t intend to sell beer beyond its hometown.

“It gives us that extra backing at home to say, ‘Hey guys, this beer is kicking butt on a national level, so you should be excited here in Cincinnati to check it out,’” McGarry says. “Cincinnati has a lot of homers. They root for the local guys hard core. It’s cool for them to have a local neighborhood brewery medaling on a national stage.”