Deploying coolships, open fermentors, turbid mashes, and decoctions, and specializing in lagers and spontaneous fermentation, the brewers at Dovetail in Chicago are among the new guard for the old ways.

Where do two brewers who share a passion for old-fashioned beers meet for the first time, if they are both from Chicago? In Bavaria, obviously. At beer school.

“We both happened to be from Chicago,” says Hagen Dost, who cofounded Dovetail on the city’s North Side with Bill Wesselink. “But our paths crossed in Munich, where we were both at Doemens Academy for the Siebel program.”

Dost had worked as an engineer for 20 years and was ready for something different. “Eventually I decided that something else was brewing,” he says. “I love beer; I love the beer world.” He took the Siebel program in two-week chunks, using up his days off.

Wesselink, meanwhile, was a longtime homebrewer ready to go pro. “It was the first day of the Munich portion of the International Diploma Course,” he says. “I was doing it in one swoop, and Hagen was doing it in parts, on vacation from his engineering job.” One reason that Dost stood out to Wesselink: Dost could speak German. “At first I thought he was some strange Swiss guy.”

“That night we went to Schneider’s Weissbräuhaus and talked about the importance of coolships in a brewery,” Wesselink says. “It piqued my interest, an old way of brewing that not many people do anymore, but it works perfectly well.”

Dovetail, founded in 2016, specializes in two things: lager and spontaneous fermentation. The lagers are traditional, heavily influenced by the rustic beers of Upper Franconia, the region around Bamberg, Germany. Dovetail’s stable includes their Helles, their kellerbier-esque Lager, their Vienna, and their Rauchbier. All of those get a traditional decoction mash, all of those pass through the coolship, and all of those go to open fermentors for primary before several weeks of lagering.

The lagers are the brewery’s lifeblood, but they served another important purpose: They helped to pay the bills while Dost and Wesselink waited to see how the spontaneous beers would turn out. Now among other things, they produce a juicy kriek packed with Michigan-grown cherries, and a “petit gueuze” that is a blend of one- and two-year-old spontaneous beer.

There are also hybrids and experiments such as the X01, a tart brown oak-aged ale in the West Flemish style, except it’s brewed with smoked malt. It’s a smoky-balsamic synthesis that should not work but it does, and beautifully. There is also the Wild Vienna; as the name implies, they put their Vienna Lager in a barrel and add some spontaneous beer, then leave it alone for a year.

Dovetail first gained a local following for its lagers; the spontaneous beers arrived later. “It’s interesting trying to sell those beers,” Dost says. “It’s almost like trying to start another brewery.” Yet those very different beers have one big thing in common. “The center of our brewery is the coolship,” Dost says. 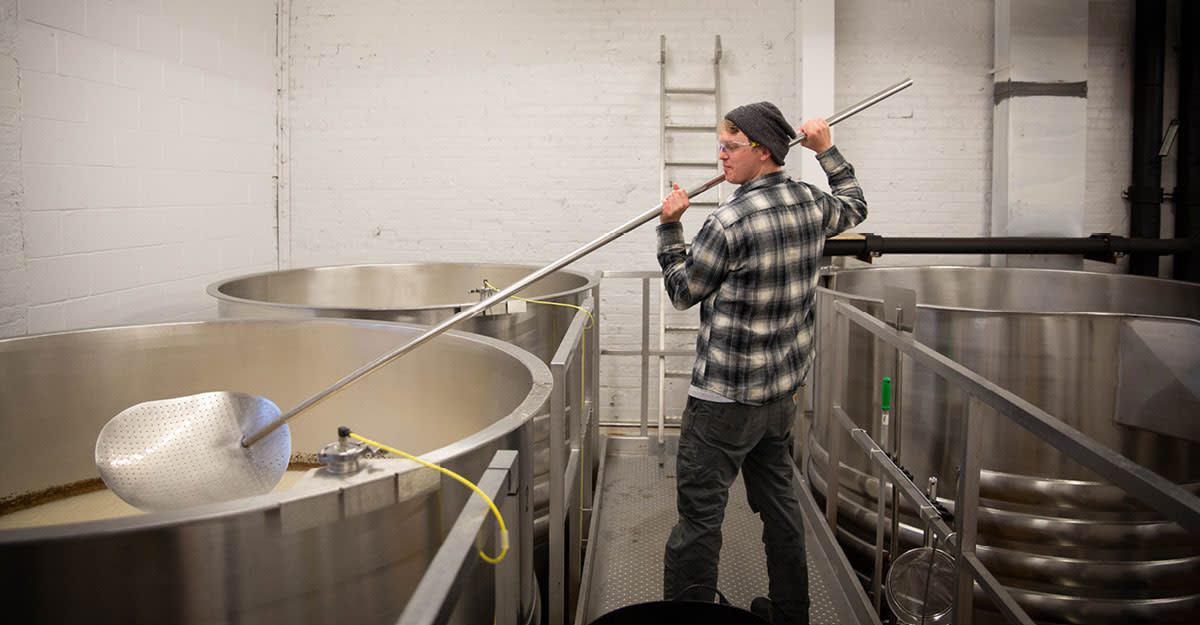 Coolships are essentially just wide, shallow metal trays for collecting hot wort. They used to be a common sight in the breweries of Western Europe. Today’s beer enthusiasts tend to associate them with traditional lambic brewing, but they were not originally meant to collect bugs for souring. They were meant to help cool wort before fermentation. Today, there are still a handful of German breweries that use them this way, including Uerige in Düsseldorf, Gänstaller in Upper Franconia, and the village Zoigl breweries of the Oberpfalz.

Dost remembers the first time he saw a coolship. It was in the pages of Michael Jackson’s Great Beers of Belgium. Eventually he saw them up close at the lambic breweries Cantillon and Drie Fonteinen. Later, when he had become as obsessed with Franconian lager as he was with Belgian lambic, he started seeing coolships in the region around Bamberg. “It was a revelation,” he says. “I knew that I wanted to start a brewery that combined the beers of Franconia and the beers of the Senne Valley. But I didn’t realize the coolship was still in use in much of Franconia.”

Let’s be clear: Coolships don’t make beer sour. (And when it comes to lambic, what’s in the barrels is far more important to the character of the beer.) However, below a certain temperature, there is a risk of infection. Lager breweries that use coolships tend to use them only until the wort is about 167°F (75°C). Then it goes to a more modern chiller and on to fermentation. Coolship fans say that benefits include the evaporation of dimethyl sulfide (DMS) precursors and better separation from hops trub.

Or, if you want, you can be romantic about it. “We always think there’s something magical or special in the beer,” says Wesselink, “something that ties it together when it goes through the coolship.”

At Dovetail, the coolship is on the second floor. When the temperature has dropped to 167°F (75°C), they begin to drain it, using gravity to get to the two-stage chiller and fermentors in the cellar.

Of course, the coolship also is key to the spontaneous fermentation program. You can be romantic about that, too, but if the coolships of Brussels and Pajottenland get their “magic” from the Senne River valley air, where does Dovetail’s magic come from?

Maybe from the L train. 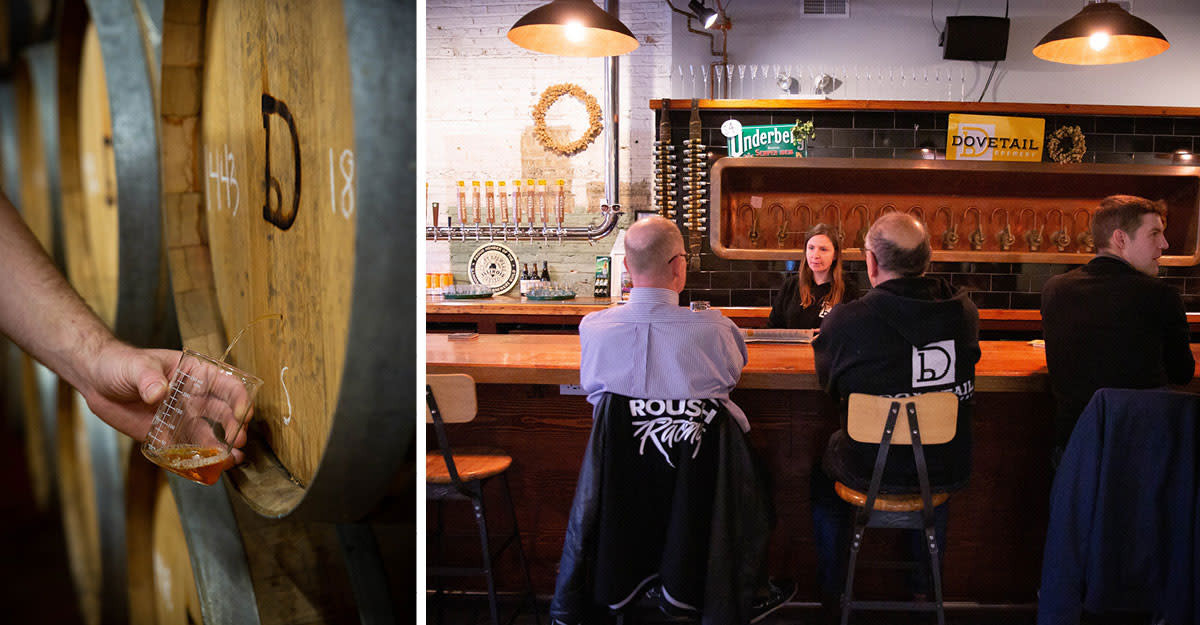 From left: Kevin Sager, barrelhouse lead, taps a barrel for tasting; regulars in the Dovetail taproom.

For the spontaneous beers, they do the same sort of elaborate turbid mash employed by Belgian lambic brewers. (For more about a turbid mash, see “Turbid Mashing,” beerandbrewing.com.) For the lagers, they are devoted adherents to decoction method—which can make for even longer brew days than the turbid mash.

Dost says that the decoction brings a deeper character to the beers, especially when it comes to malt flavor. “I feel like lagers are about malt and the interplay of malt and hops, and it’s about subtlety.”

Dovetail uses only German malt, from the Bamberger Malzerei (neighbor to Weyermann, which is better known internationally). All the lagers are decocted. Every beer goes through the coolship. All the regular beers are also single-hopped—the Lager with Tettnang, for example, and the Helles with Saphir. “We just like it that way,” says Dost. “We don’t feel the need to achieve depth through the blending of hops in the mainstays. A single noble hop has plenty of complexity to it.”

Meanwhile, all the regular beers also go through open fermentation—often a strange sight for American brewers used to airlocking their carboys or sealing their conicals. “For us, it is a less stressful environment for the yeast,” Wesselink says. “We believe that yeast cells are like people. They like sugar, they like to reproduce, and they don’t like stress. The yeast is kind of freer to do its thing.”

The open fermentation also allows them to skim off the more bitter hop components before the beer can re-absorb them. Wesselink says they believe it makes for a more refined flavor and smoother bitterness.

What about amateur brewers who want to try out something like that at home?

“I’d say, do it,” Wesselink says. “A coolship can be any sort of shallow pan. It doesn’t have to stay in there long. And a coolship is just a little more romantic,” he says. “It’s another vessel to clean, but we don’t mind. We like it.”

Brewer’s Perspective A Proper Helles: Toeing the Line between Bland and Sublime

It stands as an island in a sea of beer choice: helles as the Promised Land. But order one at any of the breweries throughout the United States that have it on offer, and you’re likely to find wildly different results. Here's how to do it right.