After paying his dues as a homebrewer and helping other breweries open, Mike Pallen of Mikerphone Brewing is making a big impact on the beer scene through inventive recipes, a ton of collaborations, and a healthy balance between work and personal life.

To hear Mike Pallen describe it, Mikerphone Brewing, a nano-brewery based in the Chicago suburbs, combines his love for music and beer. Before he opened his own place, he worked as a marketer in the music industry, and the hustle he learned and honed over years of dealing with recording artists, hanging out in clubs and making connections to get an intimate yet wide-appeal product into the hands of new customers, has served him well in the few years he’s been open.

Beer is also part of the family business. His father spent a career working for Miller Brewing, although the recipes Pallen and his team are turning out are a far cry from the beers made a generation ago by the Milwaukee brewer.

In the early days, after making some noise as a homebrewer in the Chicago scene, Pallen started working for a few up-start breweries in the area and across the border in Indiana, where the owners would allow him to make beers under his own label. That evolved into a contracting operation, then eventually to opening the doors to his own spot in 2017.

All of the beers the brewery makes are named after a song, an album, or something connected with the music industry. It keeps him focused on the brewery’s core mission and lets him open up avenues to new fans.

One thing that he cares deeply about is a good balance between work and personal life, not only for himself but for his employees, too. The brewery makes about 1,000 barrels per year, and he’s comfortable with that output because “it allows us to save some money and put some into expansion; we can take care of all of our employees, give them benefits, continue to make the quality product we do, and spare nothing when it comes to ingredients.”

To wit: it’s not uncommon for the brewery to spend $20,000 on vanilla for one batch of beer. That’s one reason that his taproom is constantly crowded, that you’ll see his beers attached to ISO on Internet forums, that he seems to be at just about every “it” festival happening around the country, and that his logo is on bottles and cans of collaborations. 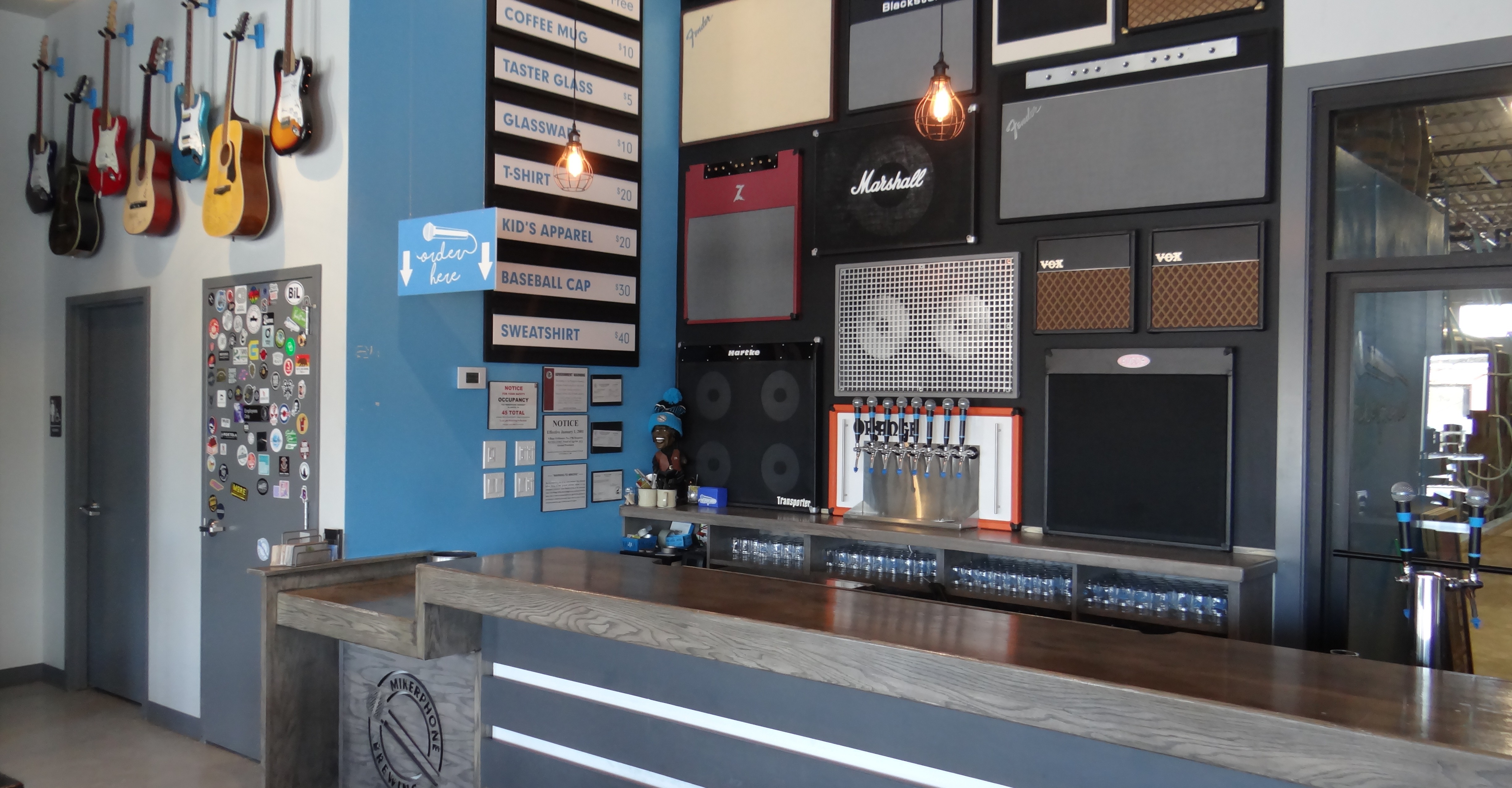 Looking back at his 2018 calendar, Pallen says he did thirty-five different collaborations, including six during the weekend that Chicago hosted the Festival of Wood and Barrel-Aged Beer (FoBAB).

“But, I’m not going to do a collab just to collab. It has to make sense. It has to be genuine. It shouldn’t be the first thing discussed.”

Case in point is a recent collaboration he did with Outer Range Brewing Co. in Colorado. He was introduced to the owners and brewers through a mutual friend, and over time and beers and text messages, a plan emerged for a beer that represented both breweries’ strengths but that also challenged them creatively.

One style that Mikerphone has owned is stouts, so it came as a surprise to him that Lee Cleghorn of Outer Range had never brewed one, even going back to homebrewing days. So together they created a stout that let Pallen share his expertise and also imparted some signature flavors of the Frisco, Colorado, brewery.

“If people come to Mikerphone for a collab, I want them to put their thumbprint on it,” Pallen says, because regular fans will already know what Mikerphone’s beers taste like or represent, so bringing something different to the palate means that folks can taste what that other brewery represents. That can be anything from mixing up a grain bill to different approaches to dry hopping.

And while there might be a trend by some breweries to just use crazy ingredients in the mash or as part of a collaboration to help it get some extra public attention, Pallen (who, yes, has brewed with Cocoa Puffs and other odd ingredients) still prefers using tried-and-true base-beer recipes and then to build out from there. And rather than just wing-and-a-prayer it, both sides spend time researching any special ingredient that will go into a recipe, ensuring that it’s being used in the best way possible and imparting the desired flavors.

“We recently did a beer with oysters in it, and it’s something I never used on either the professional or homebrew level, but the brewery we did the collab with had a friend who did.” So they reached out with their hope for the final flavors. “We’re not just throwing darts at a board. There needs to be a lot of thought behind it.”

It’s not just brewery collabs but also beer collaborations with musicians. Pallen has reached out to artists as well as had some knock on his door. In musician collaborations, he works to bring the flavors that excite the musicians to life in a beer. A recent collaboration with Jack’s Mannequin, a rock band, was an Old Fashioned–inspired Berliner weisse brewed with a touch more amber malt to add color depth and then dosed with maraschino cherries, oak spirals, and orange peel.

“As we continue to get bigger and bigger, I’d love to bring in more artists who come into town,” Pallen says.

One thing that has stood out when it comes to Mikerphone, especially with its cachet and age, is that until recently, the brewery only bottled its beer. Twelve-ounce bottles and 750 ml bottles were the norm, but not something that one expects from a young brewery.

“It’s either cans or get the hell out of here,” Pallen says. “Every day I had to answer questions on why the brewery wasn’t in cans, so it will be a huge change for us.” Still, the bottles won’t completely disappear. The sour beers the brewery makes will still go into large-format glass. “Our stouts will also stay in bottles,” he says, because “a lot of it comes down to price. We decided this year to put our barrel-aged beer into 4-packs of 12-ounce bottles, and the price point was sticker shock for some people: $50, $60 for a 4-pack. If you do the per-ounce analysis, you’ll realize it’s cheaper than two bombers. But it’s the shock.”

He’s also a firm believer that the bottles are better packaging for the beers, especially with the machine he has, thanks to the dissolved oxygen (DO) levels he can achieve.

“I think the glass is stronger and holds up longer,” he says, but acknowledges that cans are the packaging of the moment and what customers have come to expect. “All of our hoppy beers will go in cans. We’ll start doing some Pilsners and lagers and fun stuff in cans.”

Mike Pallen paid his dues as a homebrewer and after helping some other breweries get off the ground all while working on his own recipes, he's busted out onto the national beer scene.