In the little town of Littleton, traditional Schilling Beer and its brash Resilience offshoot are deepening their roots.

Littleton, New Hampshire, is home to about 6,500 residents. Sitting on the banks of the Ammonoosuc and Connecticut Rivers, it exudes the quintessential New England feel; its honors include being crowned a “Top Ten Dream Town” by Outside magazine and one of America’s best Main Streets, according to Fodor’s Travel. Nestled in that downtown bustle is Schilling Beer Co., a European-inspired brewery that specializes in traditional styles while finding new ways to push the envelope.

John Lenzini, cofounder and head of brewery operations, was bitten by the homebrewing bug early. That only intensified while he was living in Austria and Germany, enjoying his daily ration of helles with his wife, Shannon. Traveling through Belgium and the Czech Republic only deepened the influence on the beers he creates now. He was coaxed into making a legitimate business out of the hobby by Jeffery Cozzens, cofounder and CEO, and Schilling launched in 2013 in a former grist mill just off of Main Street.

Originally on a five-barrel brewpub system, Schilling began carving out a range of traditional European styles. The pub setup helped them to figure out early on what was working, and what wasn’t, and what might become flagships and fan favorites. If the ethos of the current beer landscape is steeped in excess, Schilling was sitting somewhere off to the side, quietly and diligently executing some of the most difficult beer styles.

But in 2015, with the beer market leaning heavily hops-forward, Lenzini and Cozzens figured it was time to dip their toes into bold and expressive New World beers. So they launched the Resilience Brewing brand.

“Schilling very much draws its inspiration from the Continent; we innovate to try to make some of those beers our own,” says Cozzens. “Resilience is very simply the American ale project of Schilling Beer Company.”

While nailing a traditional helles brings satisfaction to Lenzini and his brewing team, the idea of experimentation and innovation with American hoppy beers was too exciting to pass up. “We wanted to play around with hazy IPA, but it was also a response,” he says.

Combover, an IPA of 7 percent ABV, layered with Galaxy and Vic Secret, found its legs early on and typically occupies two 20-barrel fermentors in the cellar. Another 20-barrel fermentor is usually home to Ponyhawk, a double IPA with Simcoe, Mosaic, and Galaxy, along with Hop Weave, an IPA that is a base for exploring other hop varieties. 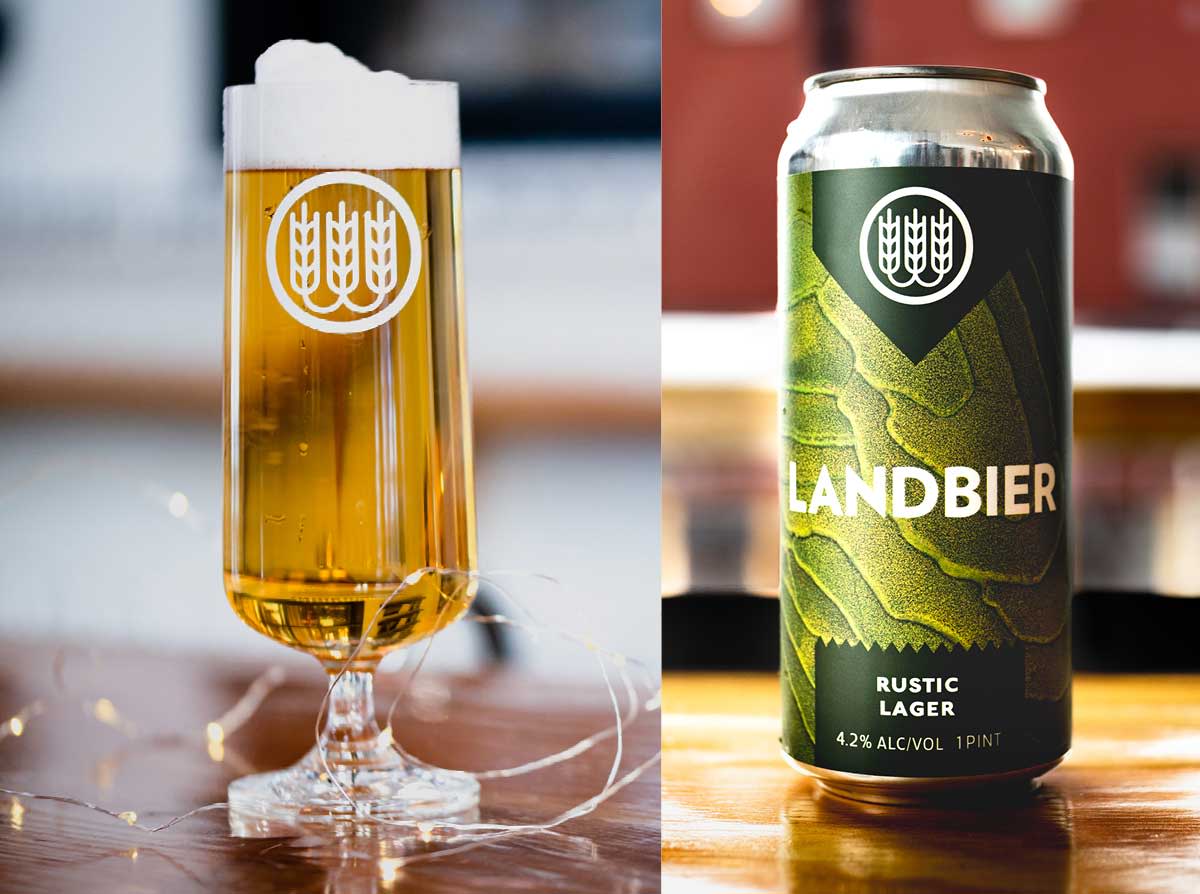 Opening up the proverbial playbook on these styles allows the otherwise traditional brewery to interact with some new-school hop flavors and techniques. In terms of deciding on hop blends for Hop Weave, Lenzini says he’s passed that responsibility on to Brewer April Morovich. “She has a hop that she uses through all of them which ties everything together; it just works. Then she’s playing with different ‘A’ player hops, or a hop that nobody knows about yet,” Lenzini says. They also keep a close eye on cost, while aware of the ballooning price of four-packs, especially IPAs. “She comes from the school of trying to save money and making it somewhat affordable.”

If hops are what push the boundaries of these New World hoppy beers, technique, process, and ingredients are what keep the team at Schilling interested and engaged. They fermented their rustic lager Landbier using TUM 35, a yeast previously forgotten until researchers at Weihenstephan revived a freeze-dried strain.

“The yeast lab banked it, freeze dried it at one point, and it must’ve just gotten packed away in a back room,” Lenzini says. “Literally a handful of months ago, they were cleaning out this back room and pulled out a box, and here are several freeze-dried strains. One of them was TUM 35.” According to Lenzini, Schilling Landbier is the North American debut for this revived lager strain of Franconian origin. The simplistic grain bill was intentional, to showcase the yeast’s crackery, lemon-zest character. It’s just one example of how Schilling continues to make new out of old.

Being the social hub of a small town, both Lenzini and Cozzens get involved with numerous local charity efforts. “It’s not something that we like to talk about a lot; we’d rather just do it,” says Cozzens. A spur-of-the-moment event in December helped raise more $1,200 in a night to provide Christmas gifts to underprivileged children, while the R.J. Schilling Fund, named for Cozzens’ grandfather, holds a fundraising fly-fishing tournament and dinner. The funds send kids to a camp where they learn about water conservation and take lessons in fly fishing.

Their annual Oktoberfest, which happens to fall on their anniversary week, is another opportunity to give back to the community. Last year they held a festival that benefited the Birch House, a local project that protects women and children fleeing abusive situations. Of course, like many other breweries, the team brewed a Resilience IPA in support of the California wildfires, but their experience was a bit different.

Cozzens recalls getting a phone call from none other than Ken Grossman, founder of Sierra Nevada, who was reaching out to get their good graces on the name. “I’m sitting at my desk, and the phone rings, and I see it’s a California number, and I pick it up. ‘Hey, this is Ken Grossman of Sierra Nevada.’ I’m like, ‘What?!’”

Grossman flew into a small airport—in the absolute middle of nowhere, according to Cozzens and Lenzini—about an hour north of Littleton. Grossman’s personal assistant assured them that Sierra Nevada’s jet pilot could land there. “Grossman gets out in his Carhartt suit, and he’s like, ‘Hey guys, I’ve got some beer for you!’ He’s the exact opposite of Jet Plane Guy,” Cozzens says.

In their new production space, just next door to where their original five-barrel brewhouse used to be, is a custom-built five-vessel brewhouse designed to allow step-mashing and decoction, but also to make double brew days a quicker endeavor, usually getting from mash-in to cleanup in 12 hours.

Their new tasting room is stark and modern with neat lines, high ceilings, and white walls. At the far end is a fireplace with cozy seating and a patio overlooking the river. The pub is still fully operational and is now home to a woodfired pizza kitchen, dazzling charcuterie options, and ample seating. A fully insulated patio with heaters keeps guests warm as they take in the northern New Hampshire views.

Besides nailing the traditional styles and the Resilience canon of hazy IPAs and pale ales, what will keep the brewing team in exploration mode is the mixed-fermentation program. The basement is where the magic happens. A modest rack of barrels against a wall features a group of puncheons, some more than a century old, with Schilling’s first run of spontaneous beer. A pair of 30-barrel Italian Bolero foeders overlook the 17-barrel coolship. Above, a trio of large windows across the room overlook the Ammonoosuc River. Schilling released its first mixed-culture effort, Asymmetry of Time, to much acclaim at the tail end of 2019, sparking new demand.

“There is a thought of organically growing the mixed-culture program, as the want is there, and I think from the reception so far, the want is going to be there,” Lenzini says.

“These things are passion projects; we do them to capture the environment,” Cozzens says. “The sense of place we have here is really important to us. It’s a very unique setting, and we want to make sure people can drink that. We felt like that full circle of looking, brewing, and drinking is kind of a cool cycle.”

This adds another wrinkle to the Schilling brand and continues to push them toward distinctive, rather than edging them toward the homogenized crowd of hoppy beer brands fighting for the next line-worthy release.

With many breweries going down the rabbit hole of increasingly absurd dry-hop regimens, stouts with finishing gravities in the teens, or miscalculated fruit purees that lead to detonating cans, the team at Schilling continues to sharpen its skills, honing in on process, ingredients, and tradition.

Simple doesn’t mean dull, restrained isn’t a synonym for timid, and tradition isn’t rooted in the mundane. Through constant experimentation and refinement of process, the beers coming out of Littleton are products of their place, as well as of confidence.

The reporter, certified beer judge, and former beer editor at DRAFT Magazine shares her highlights from the year spent tasting and covering the wide world of craft beer.