There’s a certain mentality that suggests that your business will suffer if you do it differently,” says Marika Josephson, one of the three owner-brewers of Scratch Brewing Company in Ava, Illinois. “But for me personally, I didn’t want to create food and drink that I wasn’t 100 percent proud of or a place I wouldn’t want to go myself.”

Josephson and her partners, Ryan Tockstein and Aaron Kleidon, really do approach their brewery model differently than most, especially for the town in which the brewery is located. Ava is two hours from the nearest big city, St. Louis, in a relatively secluded rural area. “We encountered a lot of people saying, ‘Well you’ll have to have a flagship beer; you can’t just do everything seasonally; you can’t not go through distributors.’” Ironically enough, they have successfully done everything they “shouldn’t” have.

The trio of homebrewers first met at a nearby liquor store in Carterville, what Josephson says is a central gathering place for local beer lovers because “back then there wasn’t a lot of craft beer around here.” It wasn’t just a brewery that the area lacked. “There was something we felt was missing from the industry, something we were really fascinated by,” Josephson continues. “We were interested in creating a product that spoke to us and the people around here in terms of the indigenous flavors and what’s locally available. We wanted to brew with ingredients from our backyard.”

So Josephson, Tockstein, and Kleidon spent more than a year testing locally harvested plants in small batches of homebrew. During that time, Josephson says, they really got to know the region’s flora. Kleidon, who grew up in southern Illinois, was no stranger to these plants, and Tockstein, who was teaching chemistry at the time, brought a high level of meticulousness to their process.

“With our minds and strengths combined, all three of us melded to form a deep understanding of plants and how they work in beer. We got a sense for the best bittering agents and for plants that have best aromas for beer,” Josephson says. In 2013, they launched Scratch Brewing Company, a 2-barrel farmhouse brewery and wood-fired pizza restaurant, on Kleidon’s family’s land just a few miles outside of the Shawnee National Forest. Tomato plants and a large herb garden on the property supply ingredients for the pizza, and the nearby forest yields endless ingredients for the beer. 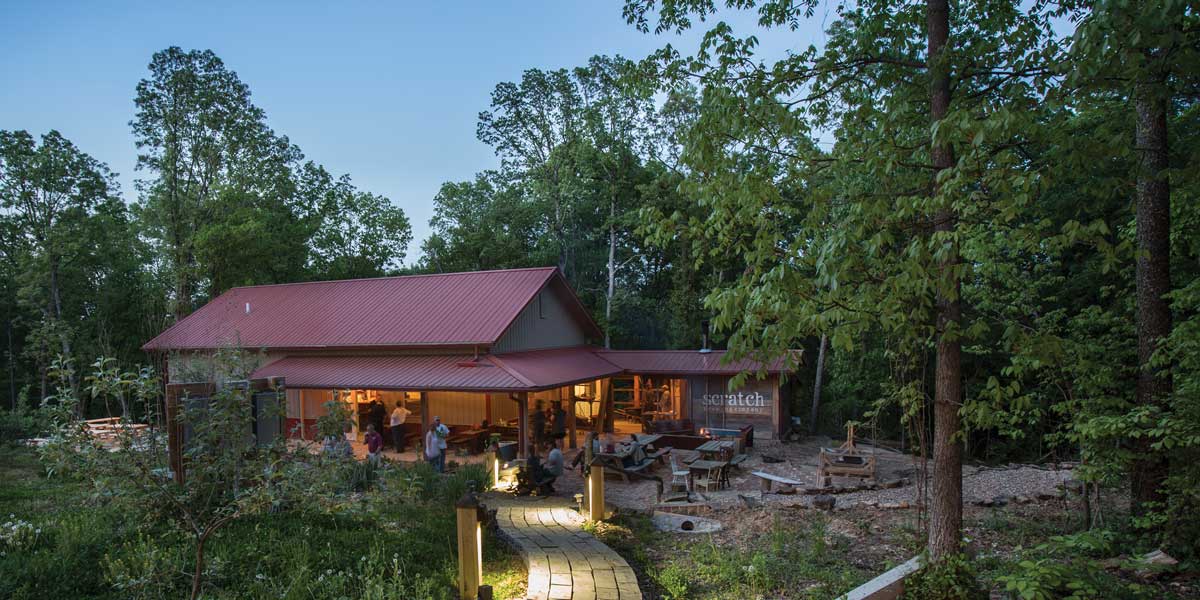 “The ingredients we use depend on the time of year,” Josephson explains. “In the winter we use a lot of roots like wild-rose roots—they have tannic qualities that add a nice finish to beer.”

In the early spring, Scratch’s beers often contain burdock root, honeysuckle, flowers, and dandelions, which Josephson says often take the place of bittering hops in the brew. In the summer, southern Illinois has a great abundance of fruits, and in the fall, persimmons and pawpaw fruit grow a plenty. “Persimmons that are native to this area are a lot smaller than persimmons that come from Asia,” she says. “Use them at the wrong time, and they’re extremely bitter and terrible, but a timely harvest yields an orangey but not citrusy flavor, with notes of apricot and spicy cinnamon.”

And then there are the mushrooms. “We use a lot of different mushrooms,” Josephson continues. “Chanterelles grow like crazy here in the summer. We also love trumpet mushrooms, which impart an earthy, chocolaty flavor in beer.”

It goes without saying that using locally harvested ingredients means slight inconsistencies from batch to batch of beer. For Scratch, that’s the best part of brewing. “We embrace the fact that things change from year to year, and we think the fun is in the experimentation with different ingredients,” says Josephson. “We learn a lot by using ingredients differently in each batch. We’re always innovating.”

Not only are they innovating, but they’re also sharing what they’ve learned. Josephson, Kleidon, and Tockstein are writing a homebrew book about brewing with farmed and foraged ingredients. Tentatively called The Homebrewer’s Almanac, the book will cover the diverse array of plants that Scratch has used in its beers.

One thing that’s generally consistent about Scratch’s beers is that they aren’t very hoppy. In fact, 95 percent of the beers, Josephson says, have only a bittering addition of hops used as a preservative. “Hops are so recognizable and so strong of a flavor that they eliminate a lot of other flavors that we want to shine through.”

“We’ve made more than fifteen gruits, or beers without hops, or whatever you want to call them,” says Josephson. Gruit is an ancient style of beer that uses herb blends (such as bog myrtle, yarrow, mugwort, heather, and juniper) instead of hops. The brewers at Scratch are bringing it back.

Last year, Scratch brewed a hops-free saison with 105 plant and fungi additions. It might sound like a flavor bomb, but Scratch’s brewers insist that the recipe called for just a pinch of this and a touch of that. “This beer has an aroma of earth and herbs that is complemented by a complex flavor of citrus, pepper, and dirt created by the myriad of Southern Illinois’s ingredients. It has the essence of here,” wrote Tockstein in the beer’s description. “We feel strongly about wanting to make very drinkable beer that isn’t overpowering,” Josephson says ardently. “I’m very proud of the fact that people want to drink several of them.”

Josephson is also very proud of the fact that she and her partners have been able to defy expectations of what a craft brewery can and should be. Although they have several beers that they have brewed more than once, they don’t have a flagship offering. What’s available at the tasting room is constantly rotating to reflect the season, the availability of ingredients, and the latest experiments. Currently, the beer is available only at the brewery and at select craft-beer bars and restaurants via self-distribution. “We made a core decision to stay local,” Josephson says. “Come hell or high water this is the way it will be.”

Scratch’s atypical business has not suffered for its differences; in fact, it has experienced the exact opposite. The thriving tasting room and restaurant have become a community gathering space in what was once a beer desert, attracting a diverse demographic that includes everyone from beer geeks to university types to people who have otherwise been Bud Light drinkers for decades.

“Craft brewers aren’t satisfied anymore with just making beer within communities,” Josephson proclaims. “We want to be creating a product that feels regional. Our business model comes from a desire that we want to make a truly local product and support our farmers. We make something that tastes like where it comes from.”

Try your hand at brewing with foraged ingredients with Scratch Brewing’s recipe for Dead Leaves and Carrots English Bitter.

We set out to explore how several craft brewers in Los Angeles are adding a sense of place to their beers in unexpected ways.