On the last days of winter, what could be better than spicy soup, a roast with smoky character, and a winter-warmer-spiked bread?

The night before or morning of the day you want to cook the roast, place the roast in a gallon-sized resealable bag set in a bowl large enough to hold the roast. Add the wee heavy and thyme. Seal the bag and place in the refrigerator until ready to cook.

Preheat the oven to 300°F (149°C). Remove the roast from the bag and save the marinade in a separate bowl.

Pat the roast dry with paper towels and season all over with salt and freshly ground pepper.

Heat a large Dutch oven or sauté pan over medium-high heat. When the pan is hot, add 1 tablespoon canola oil, then sear all sides of the roast to a nice brown. Remove the roast from the pan and place on a plate to rest.

Carefully wipe out the pan, add the remaining canola oil, and place the rough-chopped carrots, onion, and celery into the pan. Stir the vegetables with a wooden spoon over medium heat to lightly caramelize. Add the garlic and cook until fragrant.

The roast should cook for about 2 hours, or until an instant read thermometer reads 135°F (57°C). When the roast tests done, remove the pan from the oven, transfer the roast to a cutting board, and lightly cover it with foil to rest for at least 20 minutes.

Place the pan with roasted vegetables back on the burner over medium heat and add all of the saved marinade to deglaze. Scrape the bottom of the pan with the wooden spoon and cook for 5 minutes. Strain the liquid into a bowl and season with salt and pepper to use as an au jus. Discard the veggies. 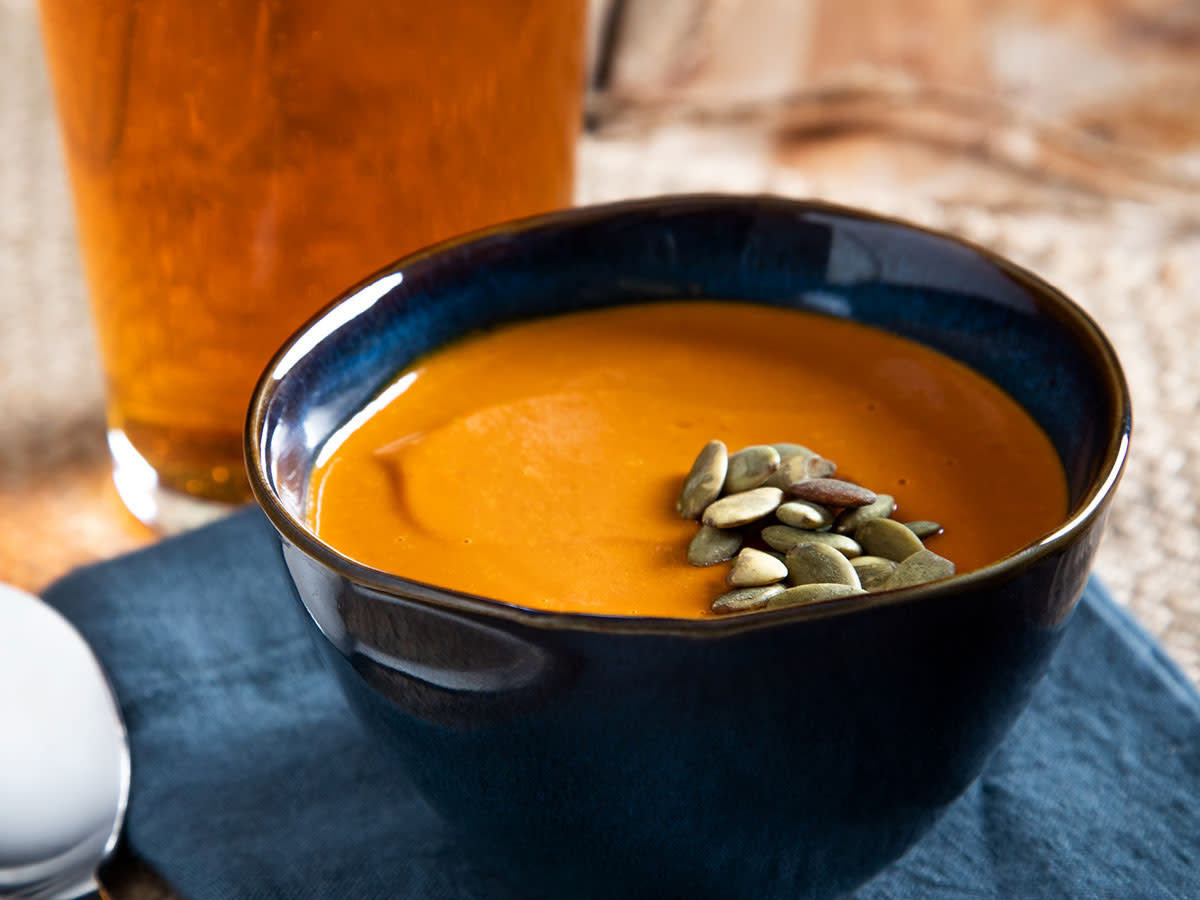 Peel the butternut squash and cut it into large pieces. Sweat the onion slices over medium heat until translucent (4–5 minutes). Add the squash pieces and remaining ingredients and bring to a simmer. Once the squash is soft and tender, puree with a blender, food processor, or immersion blender, and finish seasoning with salt and pepper.

Beer Sensory Notes: The simplest way to think of an amber ale is that it is a pale ale with a bit of darker malt—such as amber malt or crystal malt—added, creating a beer with a copper to light brown color and very similar floral notes to a classic pale ale. On the nose, you should get some light floral hops character, and the taste should have a touch of fruity ale esters and bitterness that lingers to the end but shouldn’t be offensive after the sip is finished. The malt character should have a lot of light caramel character, and usually the hops and malt balance each other out. The finish should be smooth with a touch of lingering sweetness and bitterness. Great examples to find are New Belgium Brewing’s Fat Tire, Alaskan Brewing’s Amber Ale, and Full Sail’s Amber.

What the Beer Does for the Dish: Normally in soups like this, instead of water, you’d use a simple vegetable broth or light chicken broth to add some character to the soup. In this recipe, we use the amber ale, which adds quite a bit more caramel character to the dish, creating more of a roasted butternut-squash flavor. The acidity in the beer helps create a nice contrast to the general sweetness of the squash, and it enhances the sharp cheddar cheese. The pine resin bitterness will make the guajillo chilies more potent, but they should still be part of an overall balanced soup.

In a large bowl, toss the vegetables and garlic with the olive oil, smoked paprika, salt, and pepper. When you remove the roast from the oven, raise the oven temperature to 425°F (218°C). Place a rimmed baking sheet covered with foil in the oven to preheat. When the oven has reached temperature, place the vegetables onto the hot pan in a single layer and roast for 20 minutes, shaking the pan every 5 minutes to prevent sticking. Cooking times will vary based on the vegetables you choose. When you shake the pan, check for doneness, making sure a fork slides in and out easily.

While the roast cooks, prepare the horseradish cream. Combine the sour cream, horseradish, lemon zest and juice, and hot sauce in a small bowl and season to taste with salt and pepper. Refrigerate until ready to use.

To serve, slice the roast into ¼" to ½" slices against the grain and place over the smoky root vegetables. Drizzle au jus over the meat and serve the horseradish cream on the side.

Beer Sensory Notes: A wee heavy or Scotch ale is a strong ale from Scotland and can be compared to its English counterparts of a higher ABV old ale or lower ABV barleywine. A scotch ale is very malt-forward with strong notes of caramel in the taste and aroma, sometimes adding cocoa, coffee, or a touch of dark fruit in very low amounts. A proper head pour is about a half inch of a beautiful tan color that can leave extensive lacing when drinking, and the pour is generally copper to dark brown with some ruby highlights. You may get some “earthy” notes, such as leather, tobacco, and maybe even a touch of smoke character, but not peat astringency. It should have a medium-to-thick mouthfeel, with a nice alcoholic touch, so the sweetness isn’t cloying or overpowering. There should be almost no hops character, as they’re just used for balance. Great examples are Traquair House Ale, Alesmith Wee Heavy Scotch Ale, and Orkney Skull Splitter. For truly delicious variants, try Traquair Jacobite, because the coriander adds nice floral notes, or Oskar Blues Old Chub, because it has a touch of smoked malt and a bit of chocolate character.

What the beer does for the dish: A quality marinade generally starts with a quality stock, and in this case, it would be beef stock. It has rich, umami earthiness, with added herb and vegetable characters to enhance the flavors of the beef. In this recipe, we use wee heavy as the stock, adding a few distinctly different flavors to the beef. Instead of a rich herbal character, you’re going to get a sweeter flavor with a small touch of smoke character, like adding a bit of liquid smoke to a marinade. The sugars and touch of protein in the beer will add a bit of browning when searing the meat, and the acidic notes in the beer will help pull a bit of fat out onto the vegetables when roasting. Overall the beer will add a rich, sweet depth of character to the roast that’s missing when you use a traditional marinade. 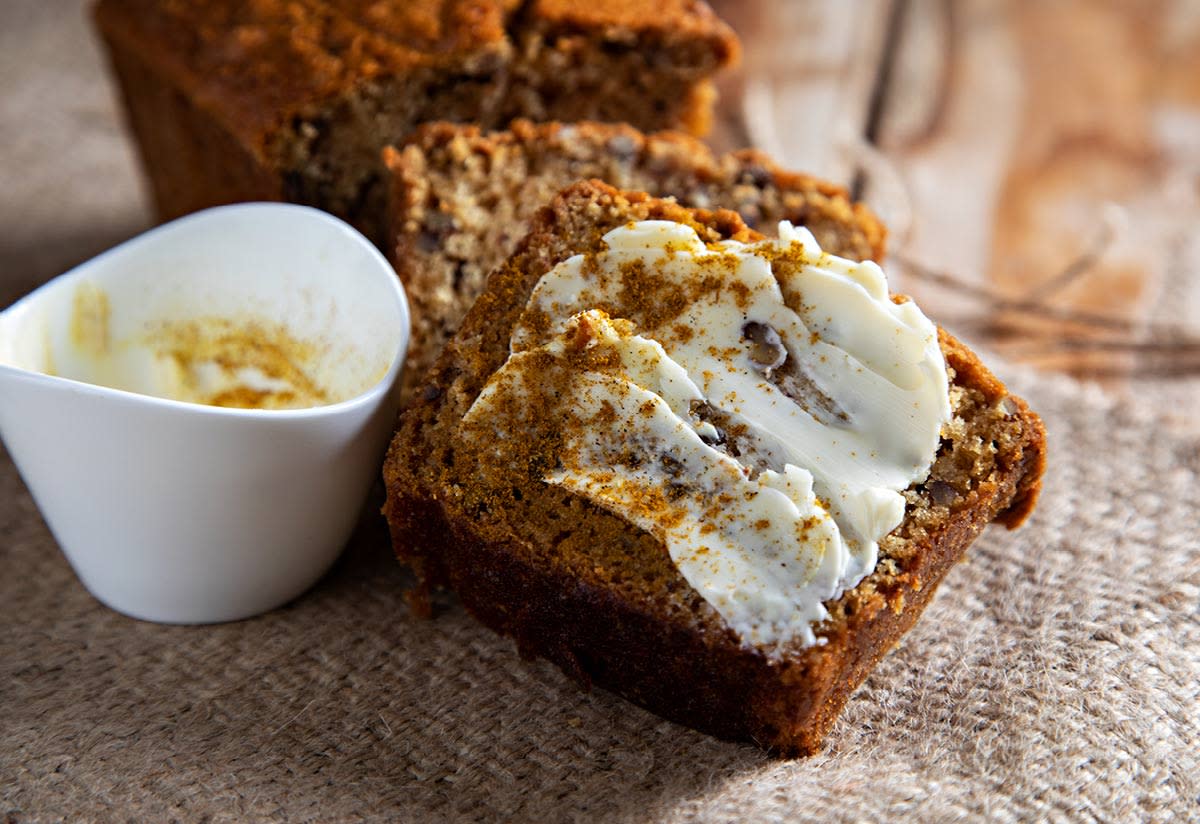 In a large bowl, combine the beer, sugar, oil, and eggs; beat well. Sift in the flour, baking soda, baking powder, cinnamon, nutmeg, allspice, and salt; stir until smooth. Fold in the pecans. Pour the batter into the prepared loaf pan.

Bake in the preheated oven for 60 minutes or until a toothpick inserted into the center of the loaf comes out clean.

Beer Tasting Notes: Winter warmers are a unique style of beer without a distinct base but a common thread in terms of flavors and aromas you can expect. These are generally darker beers, often dark brown, but they can be brownish red all the way to black. There’s a common note of holiday aromas, such as cloves, cinnamon, ginger, nutmeg, along with a strong toffee malt smell. On tasting, the rich malt flavors of toffee and caramel will dominate, but the spices definitely add a nice warming touch to the beer. British classics have minimal hops character, generally only present yet subtle on the nose, whereas American versions can have a bit more hops character and bitterness. The finish should be a touch of sweetness that shouldn’t linger too long. Some readily available examples of this style are Samuel Adams Old Fezziwig Ale, Samuel Smith’s Winter Welcome Ale, and Deschutes Jubelale. If you’re lucky enough to find Fremont Brewing Company’s Abominable or B-Bomb (any variant), you should grab those to drink while you use the others for cooking!

What the beer does the for the bread: In this bread, we replace plain water with the winter-warmer beer. This will add a bit more layered nuance to the flavors, even with the addition of the spices to the bread itself. The toffee, caramel, and, sometimes, cocoa flavors will add an earthy sweetness to the bread, and the malt will darken the bread from a medium light yellow to an almost light brown. The spices in the beer will complement the added spices, and because they’re technically aged while in the beer, they won’t be exactly the same as the fresh spices you’re adding. The carbonation and very mild hops character will cut through a bit of the sweetness in the bread, too. This soft, rich quick bread is great for dipping in the butternut soup or the roast beef au jus.

For this recipe, Christopher Cina prefers to use something with a little sweetness to it, such as a winter warmer or an oatmeal stout—the use of the Gruyère helps make this a sandwich that stands up to a full-bodied beer.