My beer has been sitting on 1.5 ounces of dry hops in the secondary fermentor for 12 days, and the airlock is still bubbling. I like that it’s still fermenting, but I don’t want to dry hop the beer for more than 2 weeks. Should I rack or bottle? — Morgan, Vilnius, Lithuania

There are really two parts to your question. The first concerns a bubbling airlock, and the second has to do with how long to dry hop. Let’s first look at the airlock issue.

“The beer was probably still fermenting upon transfer to secondary,” says Adam Glaser, head brewer at Jagged Mountain Craft Brewery in Denver, Colorado. “The purpose of racking to a secondary fermentor is to separate fermented beer from the yeast, so be sure to take gravity readings 2 days in a row once bubbling has stopped to ensure you are at terminal gravity.”

The only reliable way to gauge fermentation progress is to monitor the specific gravity of the beer. If the measured gravity is at or near the anticipated terminal gravity and remains stable through consecutive readings, then fermentation is complete. But if the numbers remain substantially above the target final gravity, or if the gravity continues to drop, the yeast probably still has some work to do.

Another phenomenon that may be at work here is residual carbon dioxide release. During primary fermentation, a substantial amount of gas vents to the atmosphere through the airlock, but some remains in solution in the fermented beer. The actual amount of dissolved carbon dioxide depends on the beer’s temperature: the colder the beer, the more carbon dioxide stays in place.

When you add dry hops to your beer, some of that carbon dioxide is released thanks to nucleation. If you’ve ever dropped hard candy into a bottle of soda and observed the ensuing eruption, then you’ve witnessed an extreme example of nucleation in action. In the case of soda rockets, the rough, porous surface of the candy provides countless nucleation sites, which are pinpoint locations where carbon dioxide bubbles gather, reach a critical volume, and emerge from solution. Many of your favorite craft-beer glasses and goblets feature intentional nucleation sites etched into the glass to encourage bubble formation.

Hops particles can also serve as nucleation sites, and those who dry hop with pellets (more on this in a bit) quickly learn to add the pellets slowly to avoid an eruption of foamy, slimy hops goo. Whole-leaf hops are less prone to catastrophic discharges than pellets, but it’s always a good idea to leave a little extra headspace when dry hopping. Carbon dioxide release can go on for days, and if the beer’s temperature happens to increase at the same time, fermentation might appear to continue even when it’s complete.

Remember, the only way to know for sure is to take gravity measurements!

Experience the world’s best online learning resource for brewers with CB&B’s online classes! Sign up for one today!

The second part of your question is related to how long you can leave a beer in contact with dry hops, which leads us to the next brewer’s question.

What’s the best way to use dry hops? How do you add them, how long do you leave them, and how much do you use? Are pellets or whole cones best? — Reagan, Fort Collins, Colorado

Dry hops are added to beer after fermentation and are responsible for the intense hops aroma that characterizes many of today’s most popular beer styles. Typically, beer is racked from the primary fermentor to a secondary conditioning vessel after fermentation is complete. Dry hops are added to the secondary, where they’ll stay for anywhere from 4 to 14 days before packaging.

The amount of time to leave dry hops in contact with your beer is somewhat flexible, but there are some practical limits. “I have found that most hops character is extracted after 4 days of contact time and anything more than 14 days starts to extract leafy or grassy characters from the hops,” Adam observes. One week is great if you have no reason to do anything differently.

If you don’t use a secondary fermentor, you can add dry hops directly to the primary, but do so after you’re sure that fermentation is complete so that the escaping carbon dioxide doesn’t carry away all of those delicate hops aromas. Another thing to consider if you dry hop in the primary is that all of the hops material and the trub left over from fermentation may promote clogging of your siphon. Be patient, and siphon slowly if you dry hop in the primary.

Brewers are fairly split when it comes to how to add dry hops to their beer. Some prefer to simply “toss them in and let them swim,” while others place dry hops in a muslin or nylon hops bag for easy removal. It’s really a matter of preference, but if you do use a bag, be sure to sanitize it first!

Speaking of sanitation, new homebrewers sometimes wonder whether dry hops need to be sanitized before they’re added to beer, and the answer is—thankfully—no. Between the beer’s alcoholic, acidic nature and the antiseptic properties of the hops themselves, it’s unlikely that any bugs you may introduce will stand a chance. So yes, sanitize the bag (if you use it), but leave the hops just as nature (or the pelletizer machine) intended them.

The quantity of dry hops to use really depends on the kind of beer you’ve brewed. Dry hops of any kind are traditionally out of place in German lagers (but don’t let this discourage you from trying), while today’s imperial IPAs might contain more dry hops than kettle hops. Homebrewed imperial IPA recipes often include 4 ounces or more of dry hops. Start with 1 ounce of dry hops for a 5-gallon batch and adjust the quantity to taste. 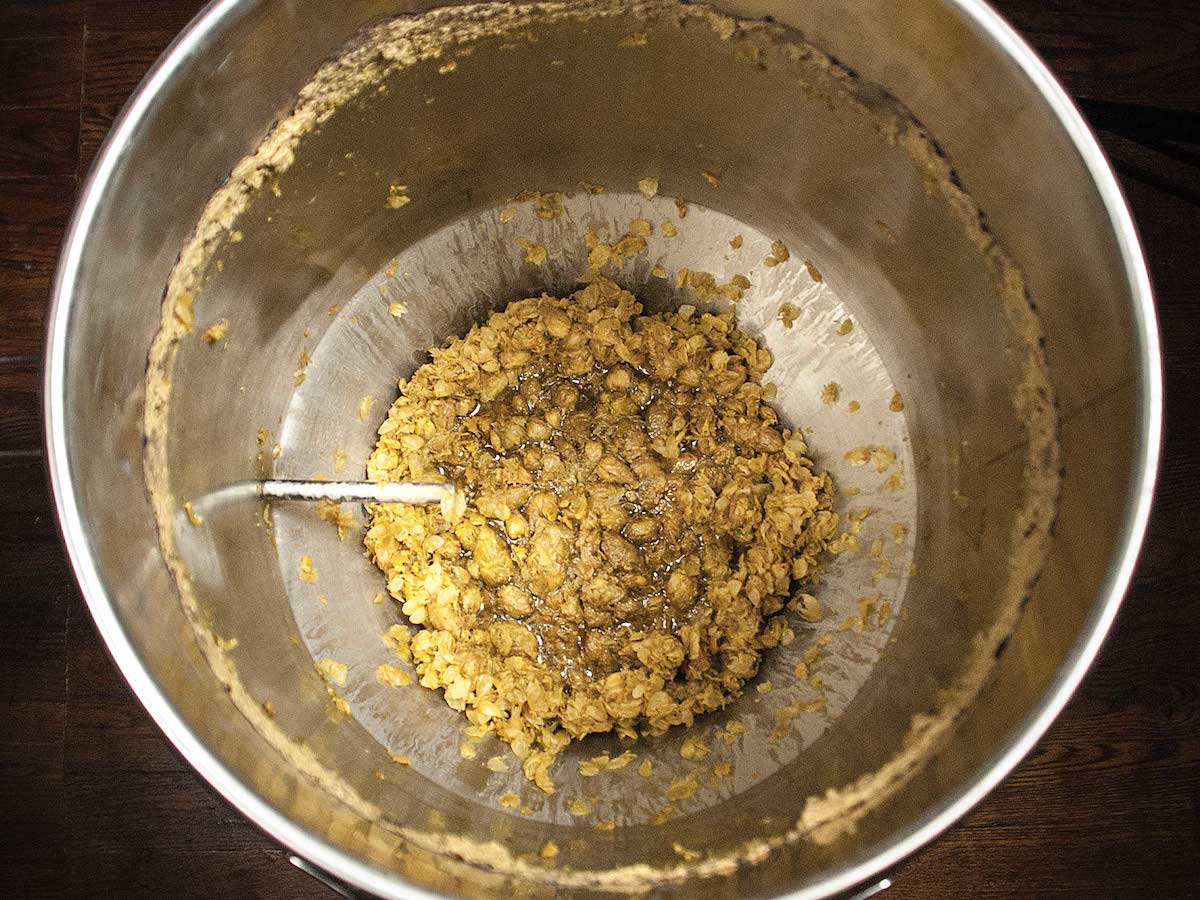 As for pellets versus whole-leaf hops, it ultimately comes down to personal preference. Homebrewers often condition beer in carboys, and pellets can be a little easier to get down a narrow neck than cones. Pellets break apart and sink to the bottom after a while, leaving behind a thick hops sludge, while whole hops remain intact and float on the surface.

Nature gives us hops in only one form—the female cones of the climbing hops plant—but hops growers and processors deliver those hops to brewers in a range of products.