Gearhead: Keeping an Eye on a Brewery’s Microscopic Workforce

For a price, automated cell counters can save valuable lab time otherwise spent peering into microscopes and counting manually.

Today’s breweries have a lot of specialized hardware, and in this column, we’ve looked at many examples of the machines that make craft beer possible. But we haven’t yet looked closely at the smallest and most important machines in the brewery: the yeast.

Those single-celled microorganisms do all the heavy lifting. Sure, there are brewers sweating over hot mash tuns and brew kettles and cellarmen humping kegs from dock to cold box, but at the end of the shift, those guys and gals clock out and go to sleep. Yeast don’t sleep until the job is done, and it’s a job the fungi seem purpose-built for: breaking apart saccharides and reassembling the carbon’s atoms into intoxicating (to us) ethanol. It’s the critical task in wort’s transformation into beer, and it all happens at the cellular level. How do brewers monitor and evaluate this tiny, essential workforce?

“The yeast talks,” says Max Kravitz, quality-control lab manager at pFriem Family Brewers in Hood River, Oregon. “And it’s important to have a relationship with your yeast.”

Brewers can’t command or control the organisms, but they can provide an environment where the yeast will thrive and do the work of turning sugar to alcohol. The key to the relationship between the brewer and yeast is knowing how healthy the cultures are—best determined by counting individual yeast cells in a known quantity of yeasty slurry. It is a simple process that requires only a microscope and a specialized microscope slide, called a hemocytometer. A sample of yeast slurry is carefully diluted and then transferred onto the hemocytometer, which holds a specific amount of liquid in a chamber marked with a microscopic grid. A technician then counts the number of yeast cells within the grid, performing a simple calculation to determine the number of yeast cells in a milliliter of slurry. Adding a fluorescent stain to the sample allows the tech to determine which of the cells in the grid are living and which are dead (as only the dead cells absorb the stain), and thus the viability of the yeast slurry is also available.

A trained tech can perform a count like this in a matter of minutes, and the count is useful throughout the brewing process—from accurately determining pitching rates, to monitoring yeast health during fermentation, to ensuring stable beer during packaging. The data are so compelling that several brewers say that the more comfortable they get doing the cell counts, the more often they evaluate their yeast throughout the process. Data beget data, and as a brewery grows, so too does the lab’s workload.

As pFriem grew and added more cellar capacity and more weekly turns of their brewhouse, “the counts piled up,” Kravitz says. Each new fermentation vessel, each unique yeast strain used, and each time it’s harvested—it all calls for another cell count. Even at just a few minutes per count, his techs were spending hours of their day, eyes pressed to the microscope, pipettes at their side. Wanting to streamline the process, Kravitz turned to automated cell-counting machines. He evaluated almost every device available to the brewer including the Aber Countstar, the DeNovix CellDrop, and the Logos Biosystems LUNA. He found each unit lacking in an important area—such as accuracy or user-friendliness—and settled on the X2 Cellometer from Nexcelom Bioscience.

Zach Bodah, quality manager at Allagash Brewing in Portland, Maine, agrees. “We saw the value right away. For a brewery focused on Belgian styles, it’s a vital instrument,” he says. Allagash purchased their first Nexcelom Cellometer in 2012 and a second in 2016. The units are used during almost every step in the brewing process, and the automation helps reduce the subjective difference among his team of almost a dozen lab technicians. It’s a point that Kravitz also emphasizes: While manual cell counting isn’t difficult, it isn’t as black and white as it may seem. Depending on how technicians are trained to see and read a sample, they may arrive at a slightly different count than their colleagues. It’s a small point of difference that means a variable in the formula, and the variable increases when there are more sets of eyes in a lab counting cells. While the subjectivity can be trained out of techs—or, at least, they can be trained to be subjective in the same ways—automation minimizes the variables, and variables are the enemy of consistency. 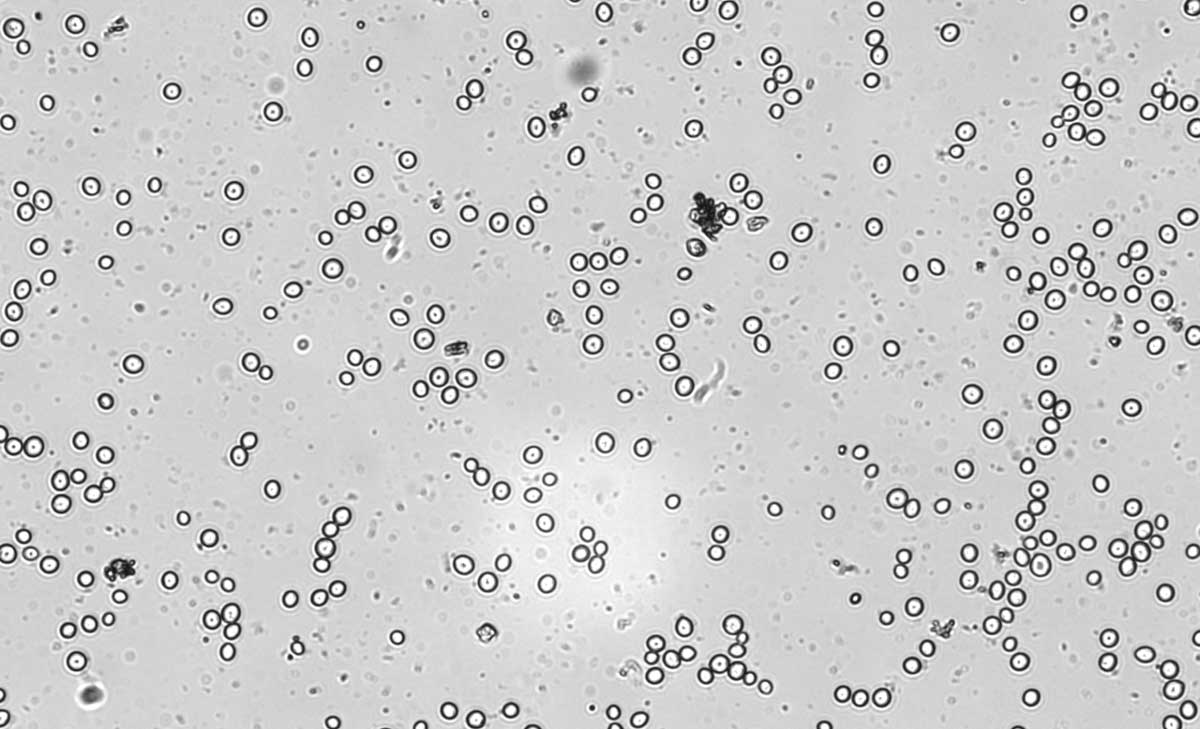 Automated cell-counters work by imaging the slides and analyzing the images to determine the number of cells, their size, and even viability. Technicians can get straight counts as a printout or a digital export, or they can save the images for future comparison. Many industries use cellometry, fine-tuning the parameters depending on what they are trying to count—be it blood, Saccharomyces cells, or even wild yeasts and bacteria.

The Nexcelom units optimized for brewery labs range in price from high four figures to about $15,000, depending on model and options. The investment doesn’t stop there, as the units require consumables in the way of disposable plastic slides and specific reagents for staining samples. Jonathan Porter of Smog City Brewing in Torrance, California, estimates the cost to use the Nexcelom X2 at about $1 per test, but that should be compared to the labor cost of more time-consuming manual counts. It’s an investment that many breweries find hard to swallow, even if they’re convinced that the automated process would be beneficial to their brewery. In the case of pFriem Family Brewers, Kravitz says that they passed on the purchase and are still counting cells manually—20 counts a day or more. Cost was the main reason, as pFriem is in the midst of a massive expansion project, but Kravitz adds that the environmental impact of disposable plastic slides also figured into the decision. “I hope a reusable slide option becomes available,” he says, but until then, “pFriem will never be without a microscope,” and his three-person team is comfortable with the processes to ensure accurate manual counting.

Adapting to an automated count workflow in the lab does take some adjustment, and Bodah at Allagash says dialing in the unit was the biggest challenge. It took their lab about three months to configure their units to work seamlessly with their yeast strains. During that period, the parameters of the cellometer were adjusted until the machine counts matched hand counts of the same samples.

A lot of growing breweries are asking the question of when to transition from manual counts to an automated process, and the many variables mean it isn’t a simple decision. The number of fermentation vessels at a brewery, how many distinct yeast strains are in use, how they are harvested and stored, the relative development of a brewery’s quality-assurance personnel and processes, and even the types of beer being made affect that calculus. At Allagash, Bodah says, “It made sense for us to automate at around 20,000 barrels of annual production.” At that point there were enough lab techs, brewers, and cellarmen performing cell counts every day that automation reduced variables in the process.

“I think a lot of breweries would like to collect this data, but it’s easier to justify buying a new fermentor that will generate revenue versus a cellometer that costs money to operate and just spits out data,” Smog City’s Porter says. “But the cellometer is a tool that gives you a window into the engine that drives fermentation and, ultimately, into beer quality.”