Let's affirm the importance of building malt complexity. By mixing up your base malts, bringing in rye or oats, or experimenting with specialty malts, you can bring depth and nuance to your beers, creating a knock-out recipe.

Previously, we learned about base malts and setting the foundation of your recipe. Unless you’re brewing a SMASH beer—single malt and single hop—your recipe will also include specialty grains that add color and nuances of flavor. By now, your familiarity with simple crystal malts and dark grains gives you the tools to make a solid all-grain batch of beer. But there’s a world of other grain choices, and this column will help you start digging into these to see what they can bring to the party.

One of the first steps to malt complexity is to go back to your base malts and mix it up a little. Vienna malt and Munich malt both count as base malts, but they are often added to a simpler pale-malt foundation. This gives you more control over the intensity. For instance, you could have 30 percent of the grist come from Vienna malt to pick up a bit of its toastiness without making that too dominant.

Our column on base malts focused on barley, but wheat and rye can also be used as base malts. More typically, though, they are combined with malted barley. Oats also fit into this category. The main caveat to remember is that since these grains don’t have husks, they can gum up the mash and lead to a stuck sparge. At lower percentages, this shouldn’t be an issue, but for higher amounts (e.g., a big weizen), you might want to add rice hulls to help prevent a thick layer of the cereal.

Wheat is most common, with examples coming from American, German, and Belgian styles. In smaller amounts (5 percent or so), it mostly just improves head retention, but larger additions add a lightly tart bready character and sometimes a bit of spiciness. Rye is less common, but German roggenbier and American rye pale ales both harness its dry finish and distinctive spicy character. Typically, you’ll want to keep rye under 20 percent of the grist.

Finally, malted or steel-cut oats are most strongly associated with oatmeal stout but can be added to many styles at 5–10 percent to get that characteristic silky mouthfeel.

There are too many specialty malts out there to list them all, but here are several that you’re likely to see in a recipe or find in your local homebrew-supply shop.

Carapils/dextrin malt— This is a standard ingredient in most of my recipes. A pound (454 g) per batch (on the order of 6–8 percent of the grist) will fill out the mouthfeel and give the beer a little more body. Don’t overdo it, though, because it can be cloying in large amounts.

Flaked barley and wheat— These can be used more or less interchangeably to improve head retention and add body. In larger amounts, the differences may be more evident, but at 5 percent of the grist, they seem pretty similar. The main downside of using these is that they can add some haze. This is another of those ingredients that I include in most of my beers, although I do leave it out of my Kölsch to preserve the clarity.

Aromatic malt/melanoidin malt— Belgian aromatic malt and German melanoidin malt each has its own nuances, but they’re both typically used to emphasize malt complexity and intensity in a beer. You can think of these malts as more muscular versions of Munich malt, but the more aggressive kilning regimen makes them darker, with stronger malt flavor and aroma.

Biscuit malt/Victory malt— Biscuit malt is a lightly toasted pale malt that’s perfect for adding bread-crust or biscuit flavors. Victory malt is functionally equivalent, but many sources suggest that it adds a nutty character that biscuit malt doesn’t have. In either case, these malts are very nice for adding malt complexity without adding too much sweetness. Early on in my homebrewing, I made my own toasted malt, but it’s easier to just use biscuit malt.

Honey malt— Honey malt is perfect for adding a touch of honey character along with some toasty notes. It also contributes a fair amount of sweetness, so it’s another one with which you want to show some restraint to avoid a cloying flavor.

Special B— Special B is rightly classified as a caramel/crystal malt, but at 150°L, it’s very dark. Along with all that color, it brings a rich, roasty, caramel profile. If you’re brewing something big and malty, Special B is a good shortcut for getting raisin and stone-fruit character.

There are some malts that are intended for very particular uses. For example, acidulated malt can be used to adjust the pH for mashing or for brewing styles such as Berliner weisse or gose. Another special case is smoked malt, including peat-smoked malt, German rauch malt, or other wood-smoked malts.

Time to Hit the Lab

Just as with our base-malt experiment, we’ll follow the same small-batch, single- step brew-in-a-bag (BIAB) process. As before, our base style will be a mild blonde ale, but the specialty malts will give us a wide range of colors and hops-malt balances. Skipping the special-use cases, the full round of testing includes ten batches or more: one control batch with no specialty grain and at least one more for each one in the list. Note that I’m leaving off the blended base-malt cases. Those are interesting, but the effects can be inferred from our previous base-malt experiment.

The recipes for this lab will vary slightly, depending on the specialty grain. Table 1 provides the grain bills in each case, in an attempt to normalize the net effect. 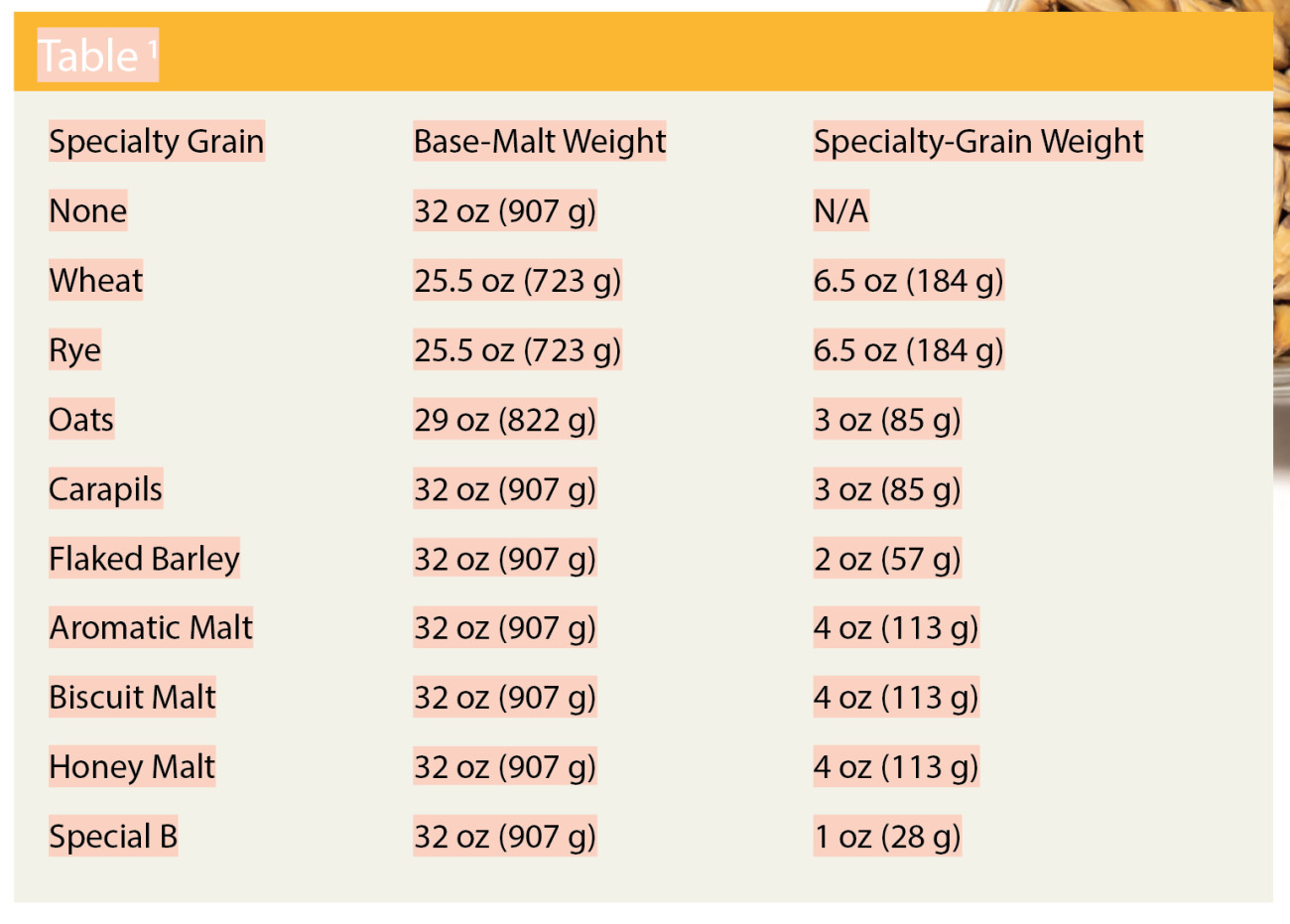 Check the temperature of the liquid. We’re aiming for 152°F (67°C). You may need to heat the liquid a little or add a splash or two of cool water. In either case, stir the bag in the pot to normalize the temperature.

Once you’re at the target temperature, cover the pot and let the grain bag sit. In winter, you may want to wrap the pot in a blanket for insulation. We want to mash for about 60 minutes, but you can check the temperature halfway through. If it’s dropped more than a couple of degrees, you should put the pot back on the burner to kick the temperature back up.

At the end of the hour, heat another 2 quarts (1.9 l) of water to 170°F (77°C). Lift the grain bag out over the pot (if you have a strainer that can sit on the edge of the pot, that would be great). Pour the hot water over the grain and into the pot to rinse a little more of the malt sugars out.

Top up the pot with another quart (946 ml) of water. Boil the wort for 1 hour, then take the pot off the burner.

Stir the hops into the wort for a whirlpool addition. Cover and let sit for 20 minutes. Then chill the wort to 70°F (21°C), transfer into a gallon (3.8 l) jug, topping up with water if necessary. Pitch the yeast and put on the airlock.

Ferment each mini-batch at about 70°F (21°C). Once fermentation is complete, bottle the batch with about 0.4 oz (12 g) total dissolved priming sugar.

If you’ve been following this series, you’re already familiar with the evaluation process. For each sample, take the time to appreciate the aroma, flavor, and appearance on its own, then go back and compare and contrast the different batches. For this experiment, the primary comparison should be with the base beer that has no specialty grains. Some of the differences may be subtle: The Carapils and the flaked-barley batches should be fairly similar, and the wheat beer should also be close.

The richer malts, such as the aromatic and biscuit, will vary more strongly, with Special B being the most extreme. As a secondary comparison, pay careful attention to the differences among this group of beers. Each of these grains has its own profile well beyond the general descriptor of “malty.”

One area for advanced studies is to contrast the specialty grains we grouped together, such as aromatic malt and melanoidin malt. Another good idea is to vary the levels to get a better understanding of the edges of perceptibility as well as why you can have too much of a good thing.

It would also be quite rewarding to start taking your building blocks to the next level and see how they combine with crystal malts or dark grains. Try changing up the base recipe by adding 10 percent of a crystal malt or dark grain to the simple pale-malt grain bill. The combinations you come up with will help you better understand malt complexity.

Light American lager is the hardest “nothing of a beer” you will ever make. Here is a simplified version.