It’s a nutty spice, but it comes from a fruit. Popular as a baking ingredient in the Middle East, the dried seeds of St. Lucie cherries can also work really nicely, as it turns out, in beer.

Running errands to the bank isn’t the worst chore for Stuart Keating. It gives him a chance to visit the nearby spice shop, where he can stick his nose into various ingredients and ponder what might be done with them.

“I walk over to Penzeys Spices and just smell stuff,” says Keating, founder and head brewer of Earthbound Beer in St. Louis, Missouri. “So I smelled mahlab and said, ‘Oh, I have to use this.’”

Mahlab—also spelled mahleb and mahlepi, among other variations—is no more and no less than the soft seeds found inside the pits of St. Lucie cherries. Little-known in the United States, it’s popular as a baking ingredient in parts of the Middle East. Its mild, pleasant aroma lands somewhere in an enticing Venn overlap of almonds, sesame, cherries, cinnamon, and toasted bread.

Keating likes the spice enough that it goes into a few of Earthbound’s beers. The first I tasted—I was surprised to learn that the beer was spiced at all—was the brewery’s Mahlab ESB. As it happens, the spice melds pretty well with the sort of nutty-bready-fruit character you might expect from a British pale ale’s malt and fermentation profile. It didn’t taste like a spiced beer; it just tasted like a really nice but interesting ESB. “It has that nice kind of toasted-grain flavor that really comes out,” Keating says.

Another Earthbound beer that gets some mahlab does taste spiced—with cinnamon. But there is no cinnamon in it; that’s the mahlab at work. Called Cozy Cowboy, this one is less conventional than the ESB. It is a gose-influenced beer—lightly salted and gently lactic-tart—brewed with mahlab, apple-cider concentrate, and a touch of lactose. There’s no getting around it: Cozy Cowboy is odd. But it works because the cinnamon-like notes from the malhab and the light acidity enhance the sweet-tart-crisp apple character.

For their gose(-ish) beers, sometimes Earthbound will use a Lactobacillus culture, and other times they simply add lactic acid to get the balance they want. Unusually, they also have been adding a bit of milk sugar, finding that it enhances the flavor of the fruit and other additions. “We’ve started adding lactose to a few of them,” Keating says. “For some reason, it really boosts the flavor.” It also seems to add complexity to lactic-tart beer, which can otherwise finish drier and more austere than he would like.

The base grist for these gose-like beers is simple: half pilsner malt, half white wheat malt. They get only a light dusting of hops if the mahlab is involved because it adds bitterness of its own. “I don’t think anybody wants a gose that’s incredibly bitter,” Keating says.

When they first tried mahlab with the ESB, Keating says, “We noticed it was noticeably, way more bitter with the mahlab in there. So we started dialing the hop bitterness back. Our usual process is we’ll cut it by 50 percent and see what happens.” The ESB is fairly bitter, but it first comes across as a spicy hop bitterness that dovetails with nutty malt. Only after tasting mahlab seeds themselves, and then tasting the ESB again, do I understand how that lingering sesame-like nut character and unusual bitterness are coming from the same place.

When you chew on a mahlab seed, it’s not a bold or sharp taste, but rather mellow and enduring. There are notes of almond, cinnamon, sesame, and amaretto. It’s beguiling.

Mahlab isn’t cheap. Keating gets it in bulk from Chicago-based John’s Import Foods, and they don’t really do small amounts of anything. Amazon and other online sellers tend to offer it in smaller amounts—but for about $12–$15 per ounce. Your best bet might be to find a local Middle Eastern market or spice shop, if possible.

You can buy pre-ground mahlab, but for brewing purposes there are a couple of reasons to avoid it. The first is that it’s no cheaper than the whole seeds. The second is that the aroma is more pronounced if the seeds are freshly ground before throwing them into the pot. Once ground, the mahlab looks and feels quite a bit like almond flour, though it is more aromatic. “It’s really fine,” Keating says. “It goes bad really fast once you grind it.” 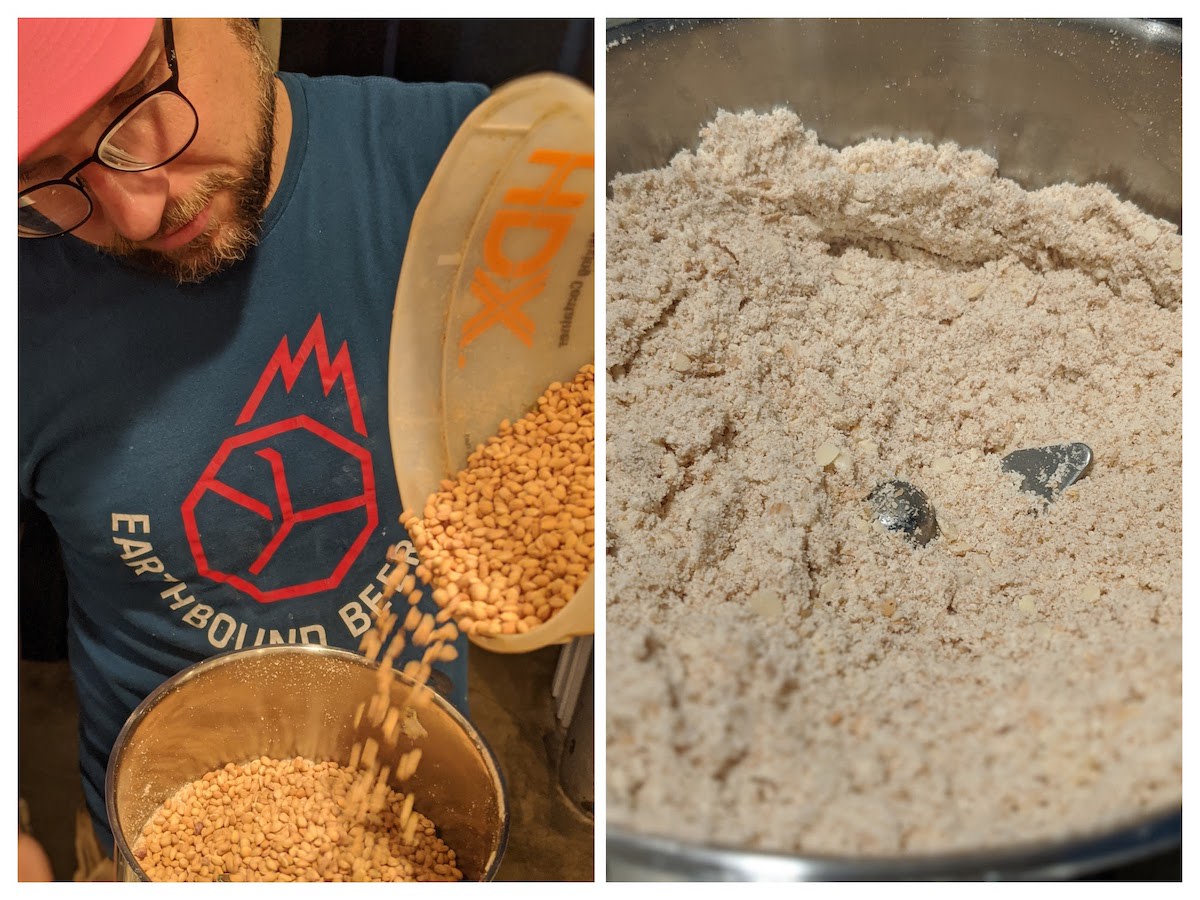 A typical handheld coffee/spice grinder will do the trick. Keating has a large and serious-looking one that he found online. “My best advice to homebrewers is you can buy some variant of this grinder for not very much money on Amazon,” he says. “This thing is a total workhorse.”

For the Cozy Cowboy, Keating adds the freshly ground mahlab to the kettle with about five minutes in the boil. He says its character is more stable that way—an important consideration, since Earthbound is recently canning more of its beer for local distribution. “We used to put the ground seeds in the mash, but we found we get longer flavor if we add them in the boil. But it’s a flexible ingredient. The flavor comes through regardless.”

Keating says that few people who visit the taproom know what mahlab is, and many seem to think it’s just an exotic name for the ESB. “I think there is some fun in mystique,” he says. However, one Syrian family visited and got very excited about finding the treasured ingredient in a local beer.

Other patrons are more like Keating himself, especially before he ran a brewery: They just like to try weird things that they don’t (yet) understand. “I was an atypical drinker,” he says. “I think a lot of homebrewers become atypical drinkers because they’re always analyzing things.”

This unusual gose-cider hybrid gets apple-cinnamon coziness from freshly ground mahlab and a hefty portion of cider concentrate. Lactose and lactic acid add sweetness and tartness to promote the apple, while mahlab adds nutty-spicy accents.