If brewing is glorified janitorial work, then you can call Cory King “Mr. Clean.” As the head brewer for Perennial Artisan Ales (under Brewmaster/Owner Phil Wymore) and owner/brewmaster of “gypsy” brewer Side Project Brewing, Cory’s stock has been rising on the strength of blockbuster beers such as his signature Abraxas Mexican chocolate stout. But beyond his brewing prowess, Cory is pushing the boundaries of the industry by leading not one, but two important Midwest craft breweries.

“I really do enjoy the sight of a $35 beer on the shelf,” says Cory. “We’re producing beers that take two to three years to make, and then right next to it is a saison that’s $10 a bottle that was made in under a month. That $10 saison is way more profitable for a brewery than making a two-to-three-year-old beer that’s $25–$35. So I like seeing that price point on the shelves because it lets breweries keep experimenting with the really fun styles.”

On the brewing front, Cory takes slightly different approaches with his Perennial and Side Project beers.

“[At Perennial] we don’t hold ourselves to things like a house yeast strain. Because we brew so many styles, we use more yeast strains than almost any brewery I’ve talked to. We buy new yeast for every batch, and most breweries don’t do that. If you try to stick to one house yeast, it pigeonholes you into the styles you can make.”

However, with Side Project, Cory has cultivated a house Brettanomyces strain that “isn’t as spicy and phenolic and horsy as a lot of them. This one is orchard fruits, a delicate Belgian ale strain.”

Perennial releases both barrel-aged and non-barrel-aged versions of its most popular styles. Side Project is 100 percent barrel-aged. “I think the youngest [Side Project] beer I’ve released was three months in oak then two months bottle conditioning. And they’re only going to get older.”

Cory’s pathway to pro brewer didn’t involve a typical brewer’s education. “Before Perennial, I was just a homebrewer,” Cory continues. “My experiences were in sales and homebrewing, and I also managed a beer bar. I’d read articles every morning, and I read this one about this guy (Wymore) who was coming to St. Louis to open a brewery. He wanted to specialize in Belgians and barrel aging. So I started stalking him.”

Meet other breakout brewers and get practical advice and tips for getting the most out of your homebrew in every issue of Craft Beer & Brewing Magazine®. Subscribe today.

“His only interview question the first time we met was pretty much ‘Why haven’t you applied to any of the other St. Louis breweries, or have you and have they not hired you?’ I hadn’t applied to other breweries because I don’t want to make those beers. I have no interest in those beers. If I’m going to do this, I’m going to go the way I want to go with it.”

Most breweries would not let their head brewer launch his own brewing business within their brewery, but Perennial is different. “They let me start Side Project inside of Perennial because Phil sat me down one day and said, ‘I know you’re going to leave me one day. You’re going to want to do your own thing. I can tell from your personality type, it’s just you.’ And I was like, ‘yep.’ I love Perennial. It’s just that I wouldn’t be 100 percent happy until I could do exactly what I want.”

“Side Project is doing a collab with Perennial, and Perennial is doing a collab with Side Project. That’s where it gets really confusing—I’ll be brewing all of it, just about, since I work for Perennial too. The Perennial part is a quad where part of it is barrel-fermented in wine barrels and part of it is barrel-fermented in whisky barrels. And the whisky version is a little bit sour. I’m souring that quad part. For the Side Project version, the entire batch is sour, with tart cherries.”

Cory remains close to his homebrewing roots, and while Perennial’s primary brewhouse is an 8.5-barrel professional system, the test batches are still brewed on a high-end homebrewing rig.

“When homebrewers ask me what they can do to become a better homebrewer, I tell them ‘It’s all about the fermentation side,’” says Cory. “Everyone’s so concerned about the cool hops, and how they’re going to dry hop it, and what their grain bill is. Then you ferment it in this plastic bucket where, if you’re not careful, you’re oxidizing everything, and you don’t regulate temperatures, and you don’t even know whether you’re pitching the proper cell counts? Are you oxygenating properly? All these super important parts.”

“You make sugar water,” he continues. “The yeast makes the beer. So let’s really stress the actual production of the beer side.”

The discipline of commercial brewing has affected Cory’s homebrewing in other ways, too. “When I write recipes now, they’re way simpler,” Cory says. “It helps with the styles we brew and the styles I like. If you think about the Belgian styles we brew, when these beers were originally brewed, you didn’t go to a catalog and look at forty different malts. You had a limited number of varieties available to you. So I take a much more simplistic approach to the malt bill, to the hops, and I really focus much more on the yeast. I like to make yeast-forward beers. I like that to be the expression for me. If I could go back, I would have played with more yeast strains as a homebrewer, and just learned about the ideal temperatures and all the fermentation science that would have made me a better brewer.”

Collaborations have become an important part of the strategy for both Perennial and Side Project, but Cory keeps that in perspective. “This industry is so much about friends, essentially, and I’m collaborating only with friends. At the end of the day, Side Project is about me making the best beer I can possibly make and exploring what I want to do, and I really want to share that with friends.”

Thankfully for the drinking public, that friends’ list includes creative brewers such as Trevor Rogers at De Garde Brewing in Tillamook, Oregon; Chase Healey of Prairie Artisan Ales in Tulsa, Oklahoma; and John Laffler of Off Color Brewing in Chicago—all of whom are slated for collabs this year.

As the craft beer market’s fortunes continue to look bright, so do the fortunes of Perennial and Side Project. “Perennial is in a good spot. I’m super happy with our quality. We doubled our capacity in February and our part-timers went full time. We have six brewers on staff, and I’ll never have to clean a keg again!”

For Cory, the measure of success is building sustainable businesses while remaining focused on brewing the best possible beer. “I started brewing [in order to] brew, to follow whatever inspiration or idea that I got at the time,” says Cory. “It wasn’t to build beer brands; it’s to make beer.”

What’s Next For Perennial

Perennial’s strategy—producing a very limited number of “flagship” beers augmented by a constantly evolving lineup of specialties—is a break from earlier craft brewery business models, but one seemingly in-tune with the rise of check-in driven culture. 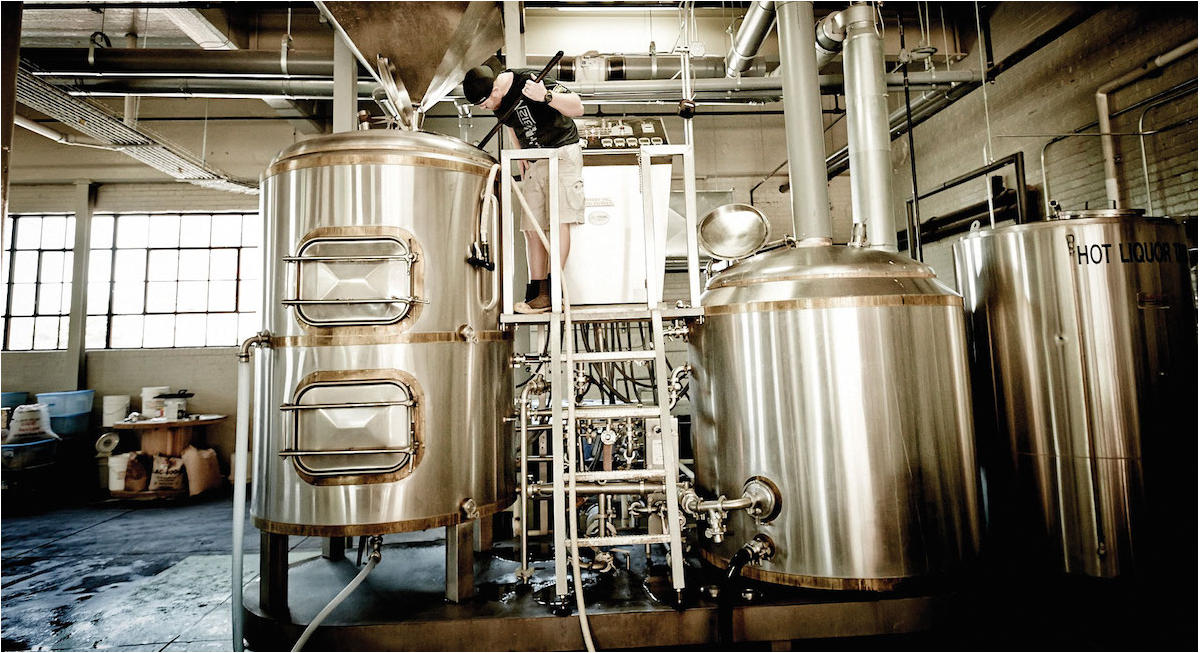 “We listen to the market and react more quickly than some other breweries do,” said Brewmaster and Co-founder Phil Wymore. “That early 2000s model of cranking out a lot of one flagship beer worked fine then, but now we find that each month demand for our new releases increases while demand for our three flagship beers shrinks.”

The next big move for Perennial is installing three recently purchased 60-barrel foeders, purchased from a winery in California (two for use by Perennial, one for Side Project). Wymore is excited about what the added capacity means for their ability to get wood-aged beer to more fans.

“Even with the couple hundred barrels we have for Perennial and Side Project, we’re producing less than 100 cases of any of those beers. With that volume, we sell it all when we release it at the brewery, and the only way it gets out of state is through traders. It’s going to be nice to produce more so we can distribute it ourselves more widely.”

But don’t worry about Perennial becoming too big too soon—Wymore is adamant about scaling the business organically. “We want to grow, but only as much as we can sustain while still producing the quality of beer that we want to produce.”

If you'd like to try your hand at brewing a Perennial beer clone, check out our Perennial Hommel Bier recipe.

Perennial’s beers cross a range of styles, from the Mexican stout Abraxas to Saison de Lis and Belgian-style ale Aria.