Rowley Farmhouse Ales of Santa Fe, New Mexico, is carving out a sour and funky niche in the Southwestern desert.

“Culinary approach” has become a buzz-phrase in brewing today, but for Rowley Farmhouse Ales, it’s not just a way to describe their latest stout modeled after a random confection. This three-year-old brewpub seizes on the opportunities that its kitchen affords them, looks for ways to incorporate cooking, as well as culinary inspiration, in the beers they make.

Take their gold-medal-winning lemon gose, Meier, for example. Most breweries would pre-acidify the mash using a pretty standard lactic or phosphoric acid addition, but brew days for this beer at Rowley start with the kitchen cutting up whole lemons, which they add directly to the mash. It’s a work-intensive process, even with their smaller seven-barrel brewhouse. But for Cofounder John Rowley, the little differences make big ones.

This approach makes sense for Rowley and Cofounder Jeffrey Kaplan, executive chef of the brewpub’s kitchen. Finding ways to integrate the beer and food programs by working in both directions (kitchen influences the brewhouse, and brewhouse influences the kitchen) adds another dimension to the experience. 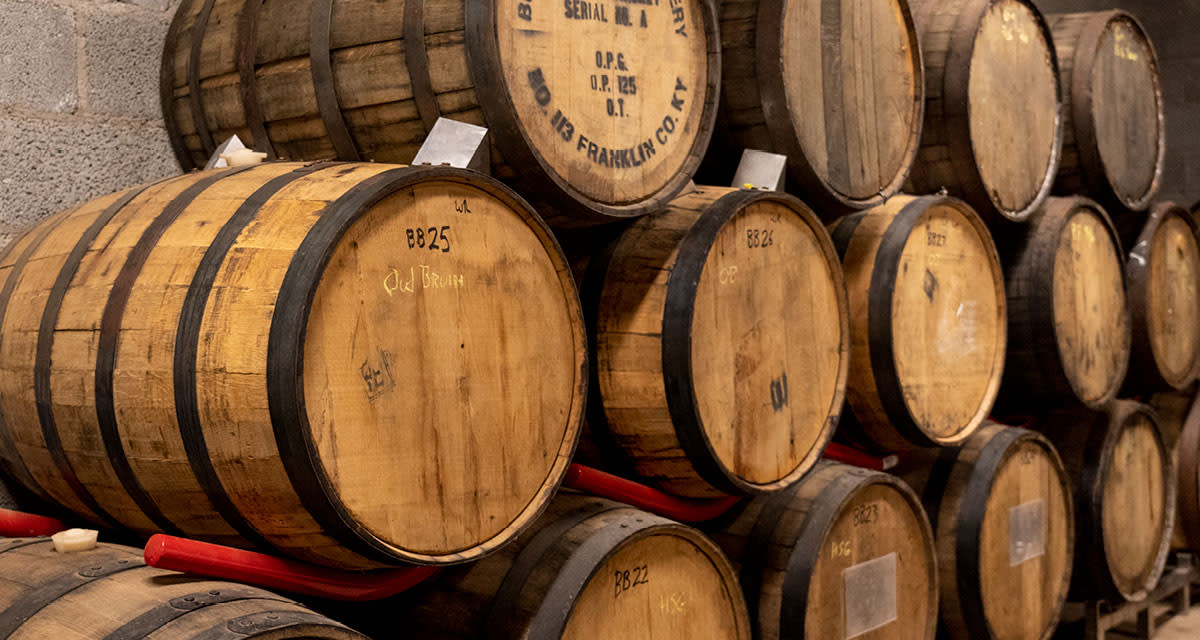 Santa Fe is brimming with creativity. Art galleries outnumber breweries almost 25 to 1. Visitors flock to everything from the Indian Market to Meow Wolf, a tactile art environment. New and old coexist. An enduring respect for the past complements a relentless focus on the now.

Chefs flock to Santa Fe for the creative environment, and the level of cuisine in the city of 83,000 people is unmatched by most cities even 10 times its size. It’s a heady mix, and an intimidating place to launch a hospitality-focused brewpub with a focus on niche beer styles. But for Rowley and Kaplan—beer fanatics and homebrewing friends—it was the perfect opportunity to realize a specific vision for a small place of their own.

“New Mexico was sort of a wasteland at the time,” Rowley says. “That’s why we were homebrewing to begin with. New Mexico has changed a lot since then—there are influential breweries in New Mexico now—but it still moves at a slower pace.”

They started on a shoestring budget, with a plan to pilot-brew on their 42-gallon system and make larger batches via contract at a local brewery. But fate brought them the opportunity to purchase their own brewhouse at a steep discount.

“When we started our build-out, we got a call about a seven-barrel brewhouse down in Albuquerque that was just sitting there,” Rowley says. “So we bought it. And that was the best decision we ever made.”

Rowley was, and still is, a chemist by trade. He works for the Los Alamos National Laboratory while Kaplan works full-time running the business of the brewery and the kitchen. The brewery isn’t just a side hustle for Rowley, though. “I have two full-time jobs,” Rowley says. “But that’s not going to last forever.” 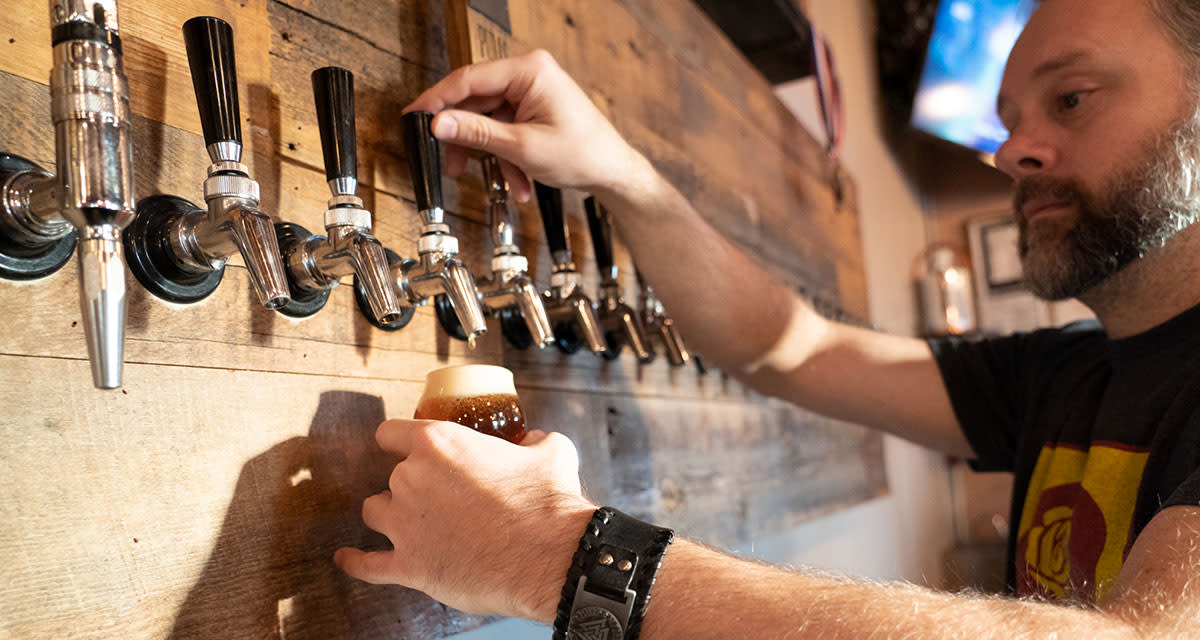 In both their silver-medal-winning Berliner-style weisse, Germophile, and the aforementioned Meier gose, Rowley employs what he calls a “live Lactobacillus fermentation.” While kettle-souring methods vary from brewer to brewer, they generally include a step where the wort is boiled to kill Lactobacillus after acidification, before the yeast is pitched. But Rowley skips the boil to retain some of the sensitive lactic notes affected by boiling.

“The devil is in the details, so I focus on the details,” says Rowley. “There’s this essence of Lacto, and you can kind of get that in some beers, but in the kettle-sour beers you can’t. A lot of stuff gets boiled off. It’s volatile, it’s gentle, it’s soft. It doesn’t stay. I try to keep that there—that’s a big thing for me. There’s an essence of Lacto that’s in these beers that isn’t in kettle-soured beers because you boil it off.”

Production-oriented breweries boil to kill Lactobacillus to prevent the bacteria from inadvertently spreading to beers in which it doesn’t belong, but Rowley takes a more open-ended approach.

“We’re already dedicated to sour beer,” he says. “If you’re a clean brewery and worried about maintaining a certain level of sanitation, then kettle-souring is for you. We really don’t care because we have a process for that already.”

They sour with Lactobacillus plantarum. They originally sourced it from a carton of mango-flavored GoodBelly, a probiotic drink. Today they embrace Lallemand’s dry version and love both the results they get and its shelf stability. They knock out through the heat exchanger into a fermentor at 100°F (38°C), and it generally cools to about 70°F (21°C) over one to two days of lactic fermentation before it hits terminal pH around 3.2.

To ferment, they turn to an acid-tolerant farmhouse yeast—Wyeast 3711 French Saison, or equivalent. That Saccharomyces strain is a diastaticus variant, which makes it particularly hardy in difficult conditions. They’re careful, however, to avoid yeast stress and the phenols such stress might produce, so they pitch at a normal rate and keep the fermentation temperature under 77°F (25°C). The goal is light, lemony, subtle sour beers, not phenol-forward farmhouse ales. However, they don’t oxygenate the wort at this point. “When it has oxygen in it, the Lacto doesn’t like that,” says Rowley.

After about two weeks of primary fermentation, they package, live Lactobacillus and all. The only drawback to L. plantarum is the strain’s hops sensitivity. “It doesn’t handle IBUs at all,” says Rowley. “We’ve tried 5 IBUs, and that kind of neutered it. It will peter out at a pH of 4.0–4.2.” 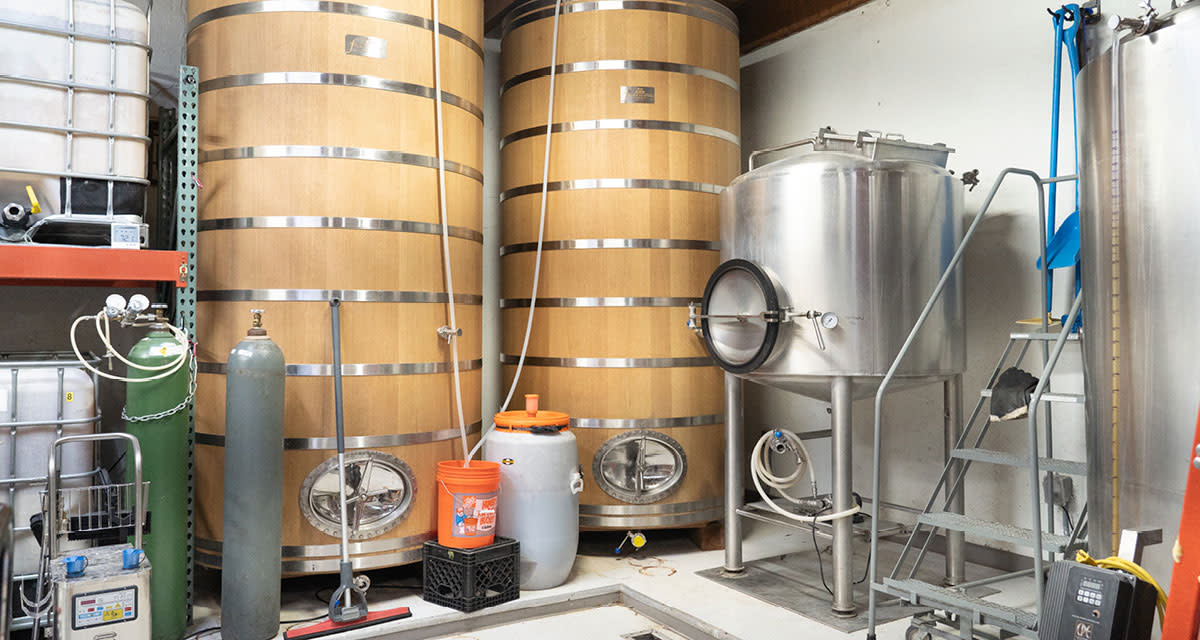 Santa Fe’s water supply is a brewer’s roulette wheel. Some days, it’s great. Other days, the municipal water authority switches wells, and the water is a chemical mess. To maintain consistency, Rowley has reverse-osmosis (RO) water delivered for brew days. They then build the mineral character according to what they’re brewing.

“We pre-acidify our water to 5.75 pH before we start,” says Rowley, “and do the whole batch of water for both the mash and the lauter. Some people do just the mash, but when I was at Sierra Nevada, they insisted that pre-acidifying everything works better. And I can’t argue with that kind of experience. So that is a thing I’ve done since, on homebrews and our commercial batches now.”

When building mineral components for beers, Rowley is a huge proponent of a soft hand. “We’re not making Burton-style ESBs and stuff like that; 100, 200 ppm at the most,” he says. “My brewer Wes Burbank really likes to lean into that more than I do. I try to tell him ‘you don’t need a lot of minerals.’ You just need enough for yeast health.”

“Sometimes you have beers that are over-mineralized, and they taste metallic or chalky in your mouth. I’m trying to get away from that. I’d rather have a softer feel because you’re going to get a hard feel from the acid anyway. Back off on the minerals; let the acid shine a little bit.”

Three years in, with four GABF medals and Small Brewpub of the Year honors under its belt already, Rowley Farmhouse Ales is still content to stay small, keep its head down, and incrementally improve its processes. Rowley and his team understand that focusing on the styles of beer they love, in the place where they are, has natural limitations.

But that won’t keep them from pushing themselves as brewers. A coolship is on the way, with more spontaneous beer in the planning stages. Rowley also is focused on deepening relationships with local and regional providers of culinary ingredients for his beers because the quality and pedigree of those ingredients make for more interesting beer. But chasing today’s trends is not in the cards.

“I don’t want to make some of the beers that are popular right now,” Rowley says. Instead he and his team want to encourage people to pay more attention to the things they’re passionate about. Getting there takes patience, discipline, and focus, and if the medals are any measure of success, Rowley Farmhouse Ales is well on its way.

The cofounder of GABF’s 2019 Small Brewpub of the Year shares the processes and philosophies behind their award-winning sour beer.