The shadowy mystery-blogger behind the controversial dontdrinkbeer blog reviewed all 7 of the tour’s beers, pairing each beer with an offering off of the Wendy’s “Right Price Right Size Menu.”

Ah! Trinity Brewing Company, ever the center of some gaff, mix-up, legal dispute, or ill-advised social media maneuver. Despite how you may feel about the various antics of the past from this brewery, they turn out pretty tasty farmhouse ales and have an articulated style to their offerings. Many would note that this penumbra is a shade too close for comfort to what Chad Yakobsen is doing just miles away at Crooked Stave, but that is a fireside chat for another day.

Recently Jason Yester at Trinity decided to showcase their various strains of Brett in a stripped down, Whites Stripes sort of fashion. They decided to brew a series of seven different beers, made with the exact same malt and mashing, each fermented with a single different strain of Brett. Here’s how the commercial tug job sells it:

“Curious about Brettanomyces? With our 7th Anniversary Project we've developed a series of 7 unique beers with the same base Saison recipe built with amaranth, lemon grass, grains of paradise, and rose hips. Each individual beer within this series is fermented from start to finish with 100% Brettanomyces and aged on French oak Chardonnay barrels. Each beer within this project is fermented with a single unique Brett, showcasing the dramatic diversity of the organism.”

This, from the outset seems interesting, but it also kind of sounds like the value menu items at Wendy’s in that you will be showcasing the simplicity and diversity, but at the core, it’s basically the same musty, funky offering over and over. To that end, dontdrinkbeer (DDB) reviewed the entire horizontal, and paired each beer with an offering off of the Wendy’s Right Price Right Size Menu—a natural union that transcends gourmand apprehension. 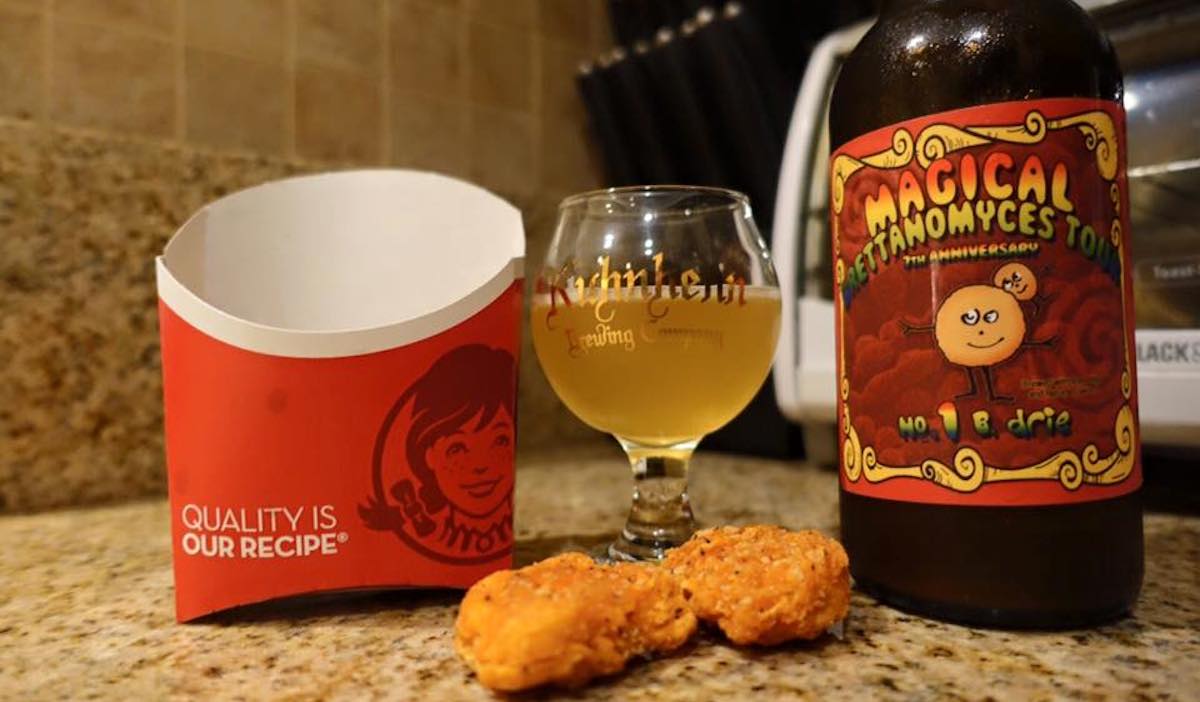 This comes right out of the gates with the standard _B. drie _that every wild ale purveyor has sitting on the shelf in an Erlenmeyer flask. There’s nothing novel or intense about this strain, and White Labs practically hands it out like unwanted schwag at fermentation conventions. You get a moderate amount of funk and Gruyère, but it is overridingly just zesty orange, apricot, lemon, and a grassy dry closing. You have had this a million times before and I suppose it is a good “control” with which to start.

The spicy nuggets were magical in themselves complementing the beer with a gristy meal and lipid core that offset the acidity with nuanced spices. 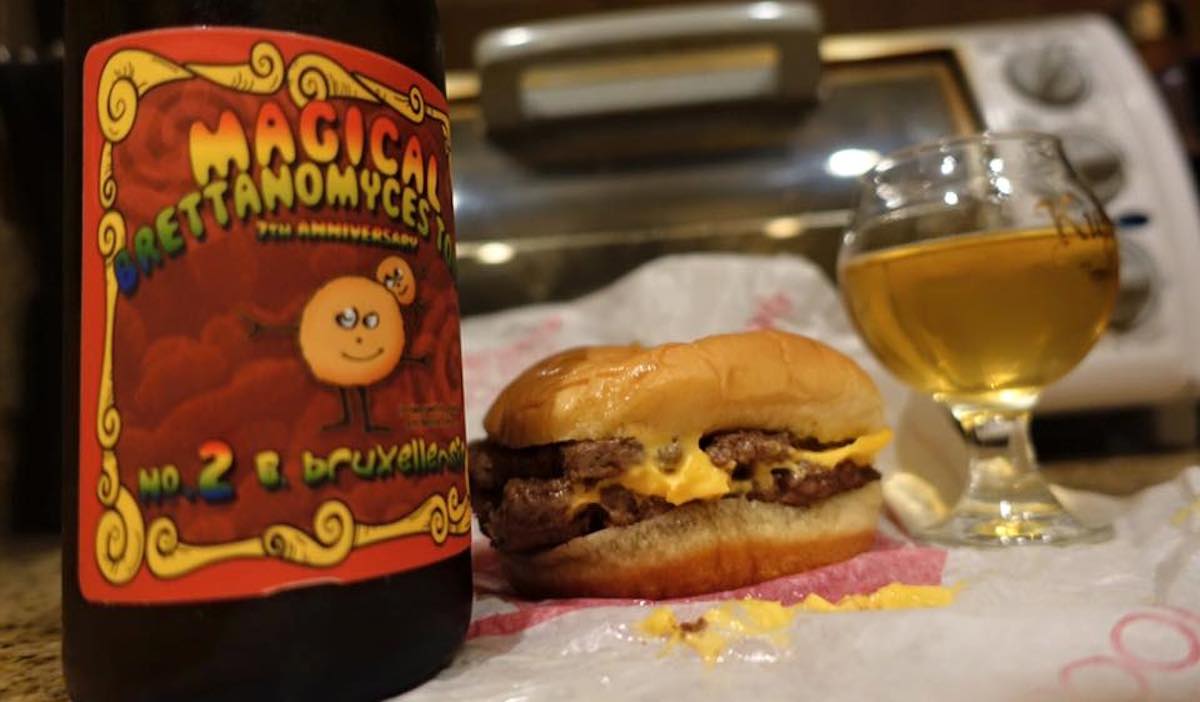 Surprise, it looks exactly the same. This was probably one of the most one-dimensional offerings in the series, and it just opens with a sort of grapefruity kumquat high-five and closes like a limeade juice bar. There’s no complexity or depth to it. It swipes right at 2 a.m. and leaves your palate all sour the next morning, never to call back.

The double cheeseburger lends a layer of cheesiness and oiliness that supports the structure of the bone-dry beer, raising it to sublime heights. 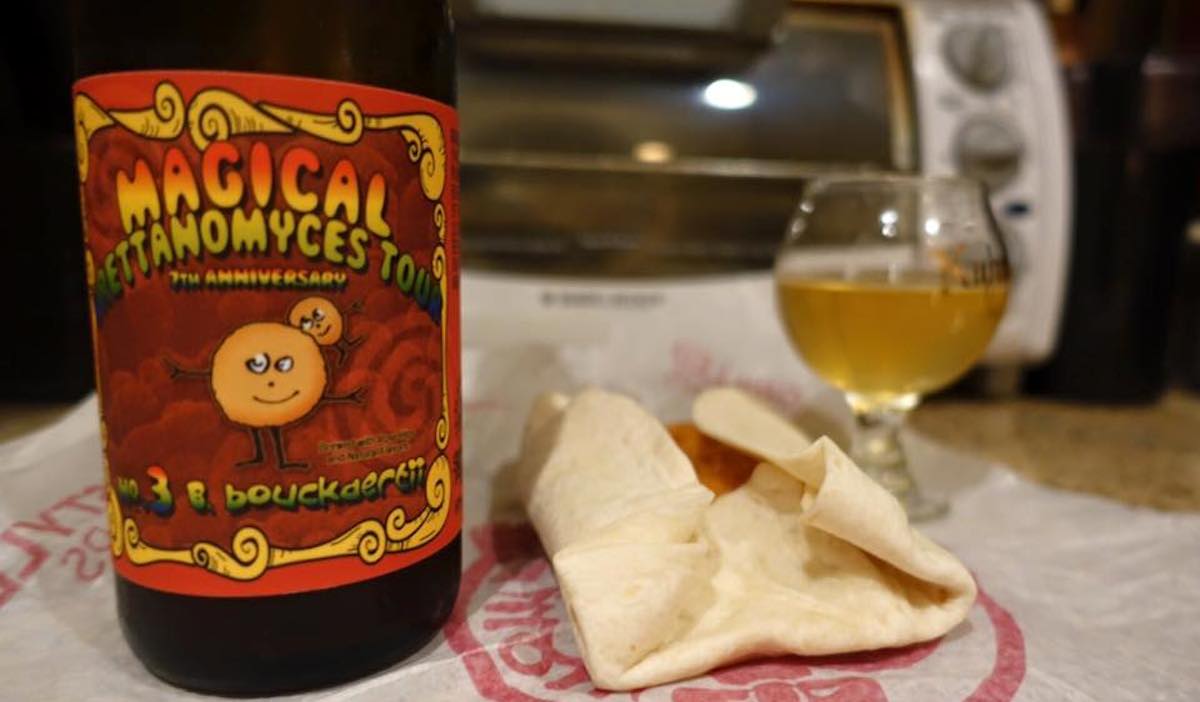 I have never heard of this strain in my life, and I feel like some of these are just anagrams for Colorado Springs strippers. This is easily the worst of the offerings in the horizontal, and it offers incredibly low acidity and then serves up a trubby, estery profile that is like smashed Captain Crunch, used cereal milk, boring Keira Knightley–thin body, without any real speaking points left behind.

The Chicken Wrap was equally disappointing and appears to be a simple chicken strip, elevated to wrap status by virtue of ad hoc ranch dressing and a lackluster piece of vestigial lettuce. A match made in heaven. 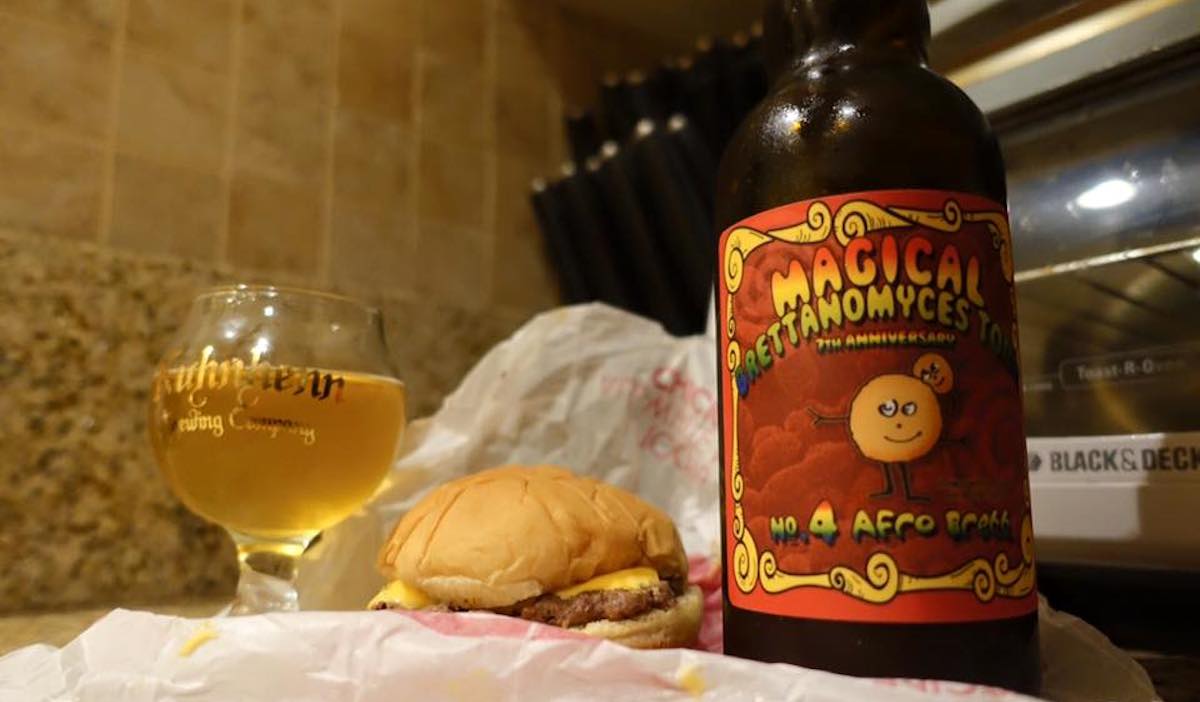 Oh man, let me crack open some old issues of Luke Cage and enjoy what may be the whitest beer ever made. For being called Afro Brett, this beer is as homogenous as the inside of an REI. It is the most interesting beer in the lineup and comes the closest to Belgian execution. In lieu of intense acidity you get a cheesy, Brie and green apple, cave-aged semisoft rindy sort of adventure. If you wiped the body out of a Doesjel and made it far less complex, you would have this stripped down Happy Madison version. I thought I would be describing the Wendy’s items as “cheese bombs” but this one takes the title.

Speaking of “cheese bombs” the Wendy’s Jr. Bacon is just the double cheeseburger with the most reluctant piece of bacon this side of Babe. It did not pair well, it was duplicative in a textbook fashion, and I began to question the integrity of these alleged Right Price Right Size Menu items.

Get dozens of beer reviews, advice from world-class brewers, and tips for getting the most out of your brewing in every issue of Craft Beer & Brewing Magazine®. Subscribe today! 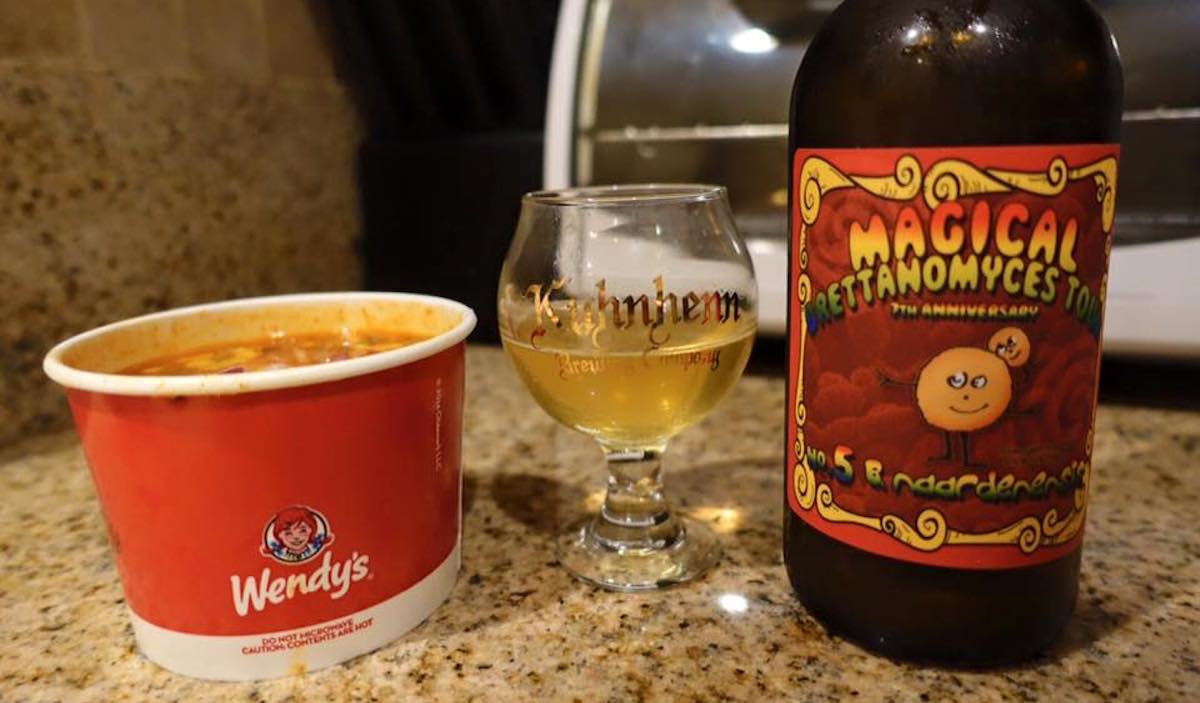 Well, Trinity is already locked up in the courts, so I wouldn’t want to hit them with a false advertising claim, but this beer tastes nothing like the old 1-2 punch they spout out on the label: “This recipe is aromatically citrus and sweaty, the palate is very acidic for a Brett beer which transitions to wet goat. A lovely essence of strawberry and mineral are apparent in the finish of this rustic profile.” Here, I can save their copy team some time: This beer tastes bitter, earthy, like orange pith, unripe hard mango, and dog bed. It wasn’t a bad experience, but it was kind of like watching all of the Transformers films back to back. After a while Shia LaBeouf starts to wear on your nerves, and you just want the one-dimensional performances to conclude in a succinct third act.

The chili, without question, was the best item in the horizontal. It reaches levels of culinary mastery not often achieved within the realm of drive-through food, fast or otherwise. The legumes and faint traces of some type of granulated protein work well with the Trinity beers because the acidity from the tomato stock dominates the puppy musk aspects on the nose of the beer. Flawless pairing. 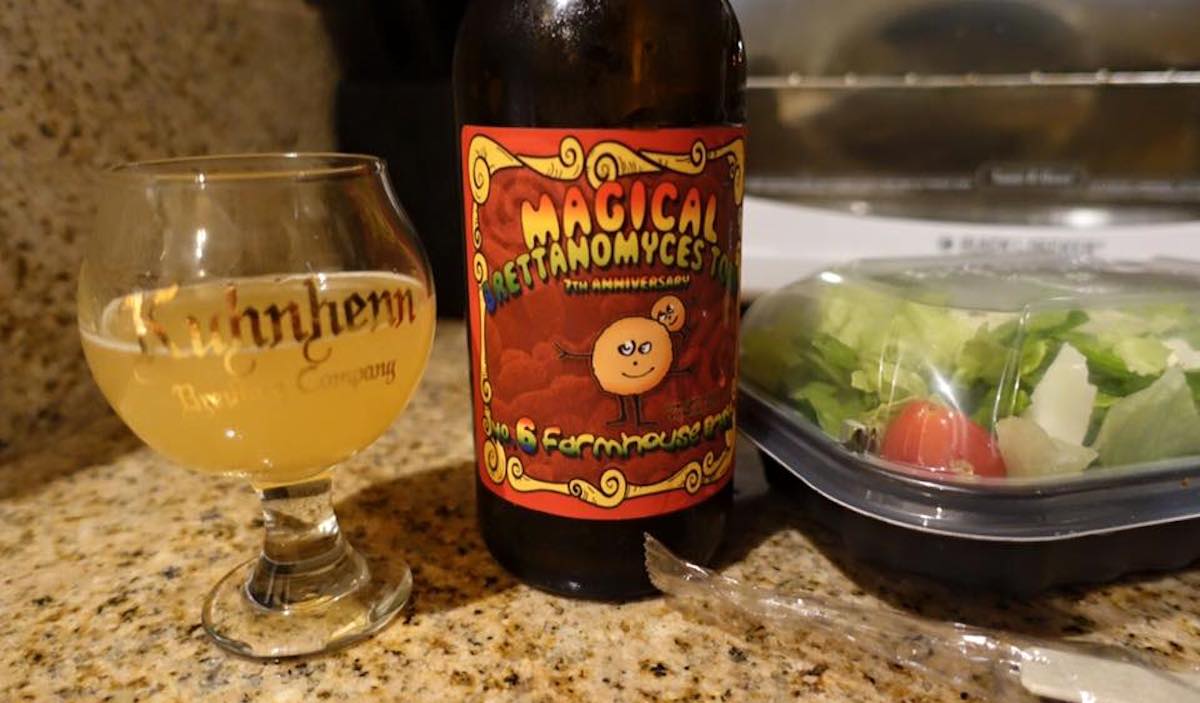 Well, you couldn’t get a more generic name than “Farmhouse Brett” unless you just named your beer “Saison Rustic Barn Rope Saddle.” Wait, actually that name is bad ass. I am not sure what exactly was farmhousey about this; it should more accurately be called “Brett L, the lacto extravaganza returns.” This is the typical strain you see that is allowed to manifest in so many tired American wild ales these days—intense acidity, enamel-stripping tartness, no body or residual anything to balance it out. PH2.5 kicks to the taint, for twelve thematic ounces.

The salad was equally depressing, but I poured the beer over it, and it made a charming vinaigrette: bright, lightly acetic, floral, delicious. 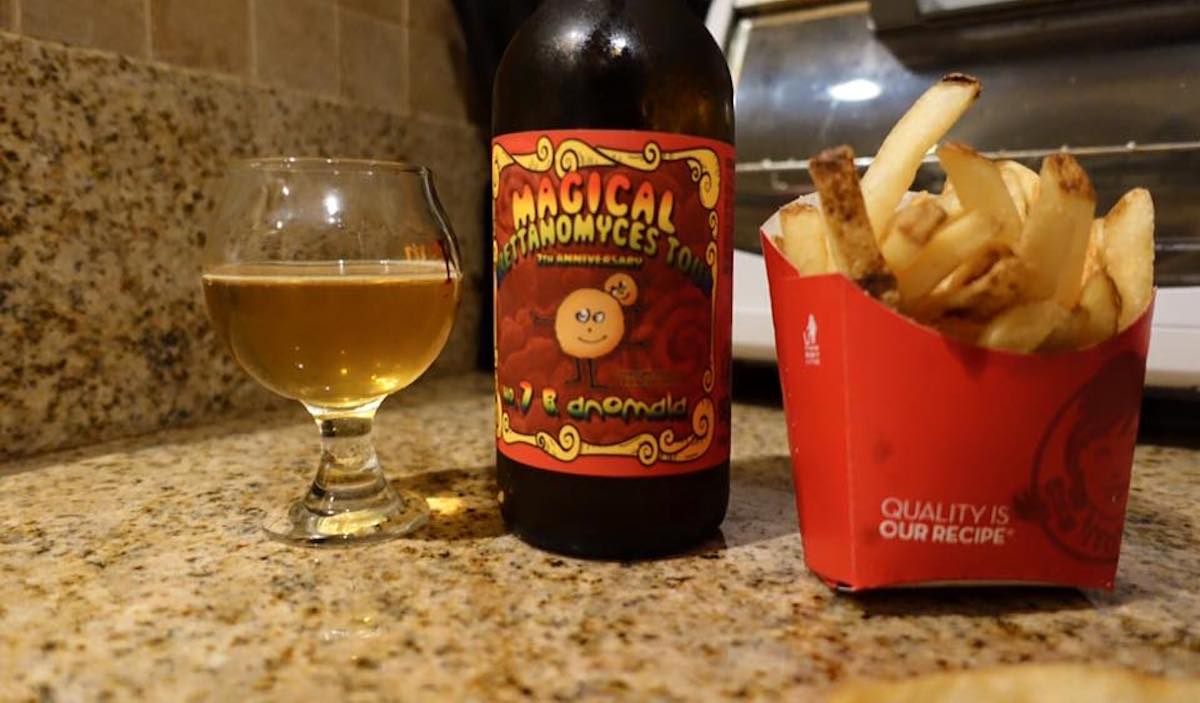 Ah yes, the final beer, like, when after 45 minutes of AOL chatting, it is almost time to cyber. This was a great bookend to the experience because it was the perfect balance of all those that came before, it had the acidity of #2, the cool cheesiness of #4, and didn’t have any litter-box aspects presented in #3: an Aristotelian mean to be sure.

The final pairing was consummate to how incredible the beer was: the inimitable Wendy’s French fries. The acidity worked well with the starches, and the brackish salty spray helps to accentuate the bitter aspects of the monoculture strain. Thank God for Wendy’s, and thank Colorado for Saison Man. The pairing of the two was both edifying and reached that Dantesque sublimity of being embraced by my Brett Beatrice. Braving a near-UTI experience, I later took the longest piss of my entire life.

We all came away stronger.

The Belgian Renaissance in America

Here are 3 American breweries that are helping lead the current Belgian charge.