Flavor Fever: The Elements of Funk

Sour and wild beers exist on a complex plane of myriad flavors and aromas produced by bacteria, yeast, ingredients, and by-products. Randy Mosher breaks down the building blocks of what we sense, to help us identify what we enjoy.

While sour and “wild” beers are unlikely to ever dominate our beer landscape, they’ve emerged from the shadowy backwaters and taken their rightful place on the shelves alongside so-called “normal” beers.

Sour beer can be a lot of things, brewed and fermented in countless ways. Rather than run through those countless ways all in text, I thought it would be easier to diagram their relationships. Broadly, they break into three large groups: Brett beers, which aren’t generally sour; cultured sour beers of various types; and spontaneously fermented beers.

Since we’re mainly focused on flavor and aroma here, we’ll not dive into these beers’ history, fascinating as it is. We’ll stay focused on the nuances of mouthfeel and the particular differences in sour taste that different microbes contribute along with the huge range of aromas, microbial and otherwise.

The Cast of Characters

Most sour beers start with a conventional yeast-driven fermentation. While wild beers can have hundreds of different species contributing to their flavor profile, three microbial families are most important: Lactobacillus, Acetobacter, and the wild yeast, Brettanomyces. While some beers are produced using Brett or Lacto as their only non-standard microbes, Acetobacter is never the star of the show and is always part of an ensemble of other microbes, along with specific conditions, especially extended wood aging.

The bacterial genus Lactobacillus and the closely related Pediococcus produce lactic acid as a by-product of their metabolism. Found in cultured dairy products such as cheese and yogurt, various species of Lacto provide acidity for such Germanic beers as Berliner weisse, gose, and a handful of others. They can also produce buttery-smelling diacetyl, which you’ll find in a lot of California wines, both red and white, where malolactic fermentation softens the wine and knocks months or years off its aging.

Acetobacter mainly oxidizes alcohol into acetic acid, the dominant sensory chemical in vinegar. Being a functional aerobe, it needs oxygen to do its thing. It can’t survive in closed stainless tanks, which is why it’s rarely a contamination problem in conventional beers. Wood, however, offers an oxygen-permeable medium, which explains its presence in barrel- and foeder-aged beers. Wood-aged beers often have some Brett present, and as long as it is alive and active, it will scavenge any available oxygen and keep the Acetobacter in check. When Brett dies, however, oxygen levels rise, enabling the Acetobacter to start producing acetic acid. A touch can be lovely, but it can quickly dominate and become unpleasant.

Brettanomyces is a whole yeast family, not too distantly related to brewer’s yeast, but with some important differences in its flavor profile and preferred diet. Its scientific name means “British fungus,” memorializing its discovery in wood-aged English old ale. It may have been responsible for the prized “stale” quality in such beers, as sourness was generally regarded as a flavor defect. Brett generally produces little or no obvious acidity, but it does add interesting aromas. As an uninvited guest, it is a pernicious beer-spoilage organism, slowly fermenting starches that normal brewer’s yeast can’t metabolize, sometimes adding harshly smoky or Band-Aid-like phenolic aromas. 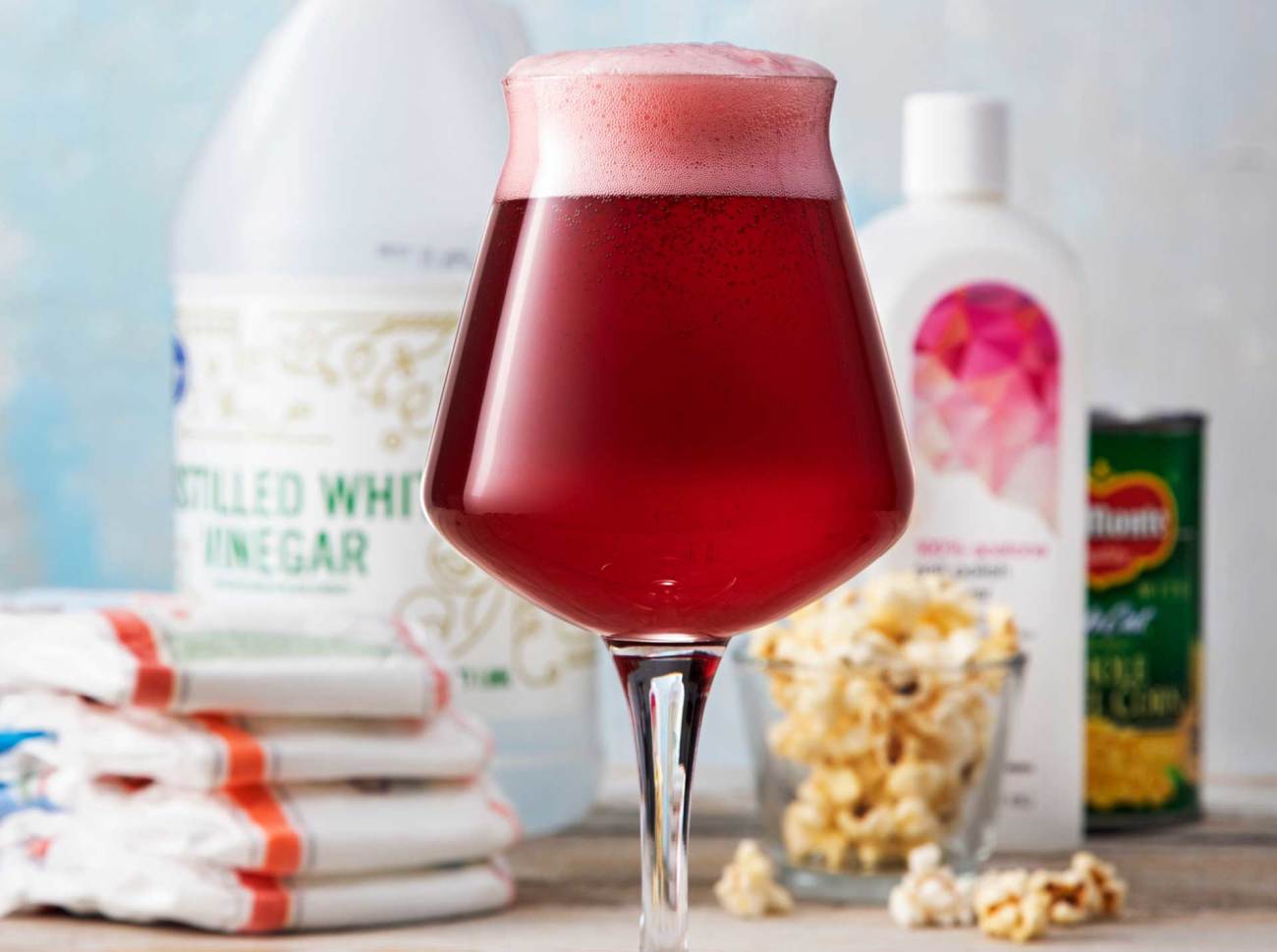 In terms of sour/funky beer flavor, let’s start with taste. With the exception of Brett beers, which have taste profiles similar to normal ones, acidity is the dominant taste. Fermentation mainly produces two acids—acetic and lactic—while citric, malic, and others may come from the fruits commonly used in many sour styles. Each has its own set of characteristics.

The common measure of acidity in brewing (as well as scientific endeavors and many other applications) is pH, a logarithmic scale of proton (hydrogen ion) concentration and the basis for acidity/alkalinity. The pH, however, is a poor yardstick of perceived sourness. Our sense of taste measures sourness by counting intracellular protons, but not all have equal access to our sour receptors inside taste cells.

Oddly, protons not bound to molecules have a hard time getting through the cell membrane. As a result, strong mineral acids such as hydrochloric have less access to our sour receptors than the organic acids in sour beers, which come across as more sour than their pH would suggest. Each different type of organic acid has a different permeability and, therefore, a different perceived sourness relative to pH.

All strong acids create irritating trigeminal/mouthfeel sensations as a defense, whether swallowed or inhaled. As with aromas, organic acids such as acetic have differential access to the sensory cell’s interiors, and they can be irritating even at fairly low levels. This is why you may choke up if something such as salad dressing or a Belgian sour red ale goes down the wrong way, triggering coughing. Further, there are two different trigeminal receptor types for this: TRPV1 and TRPA1, the capsaicin and mustard-oil receptors, adding another layer of differences between acid types.

A final complication is that citric and malic (apple) acids may enhance a dry, puckering astringency in some fruited, wood-aged sours. All of these variables alter the overall character of an acid, making acetic especially pungent and sometimes harsh, while citric and malic have a bit of a sharp and raspy edge, respectively. So regard any numerical figure of a beer’s acidity with suspicion.

Tannic character is much beloved in wine, forming an important balance element against the acid in wines—and in wood-aged sour beers as well. I have seen a wine vocabulary wheel that lists 19 different tannin-specific vocabulary terms, mostly falling into two camps: “smooth” and “harsh.” The science, as it is known right now, suggests that there might be two mechanisms, roughly corresponding to these two categories; mix the two and you get a continuum. It hardly needs to be said that the “smooth” type is preferred. Wood does a number of other things for sour beer, harboring microbes in its porous structure, and allowing a diffusion of oxygen for such organisms as Acetobacter and Brett.

The normal interplay of sweet malt versus bitter hoppiness goes out the window in many of these beers, especially the very sour ones. What constitutes balance in sour beer is impossible to quantify, but it’s important just the same. It might just be easier to describe the opposite: lopsided, incoherent, overwhelmed by X (i.e., acidity, bitterness, tannins, …). 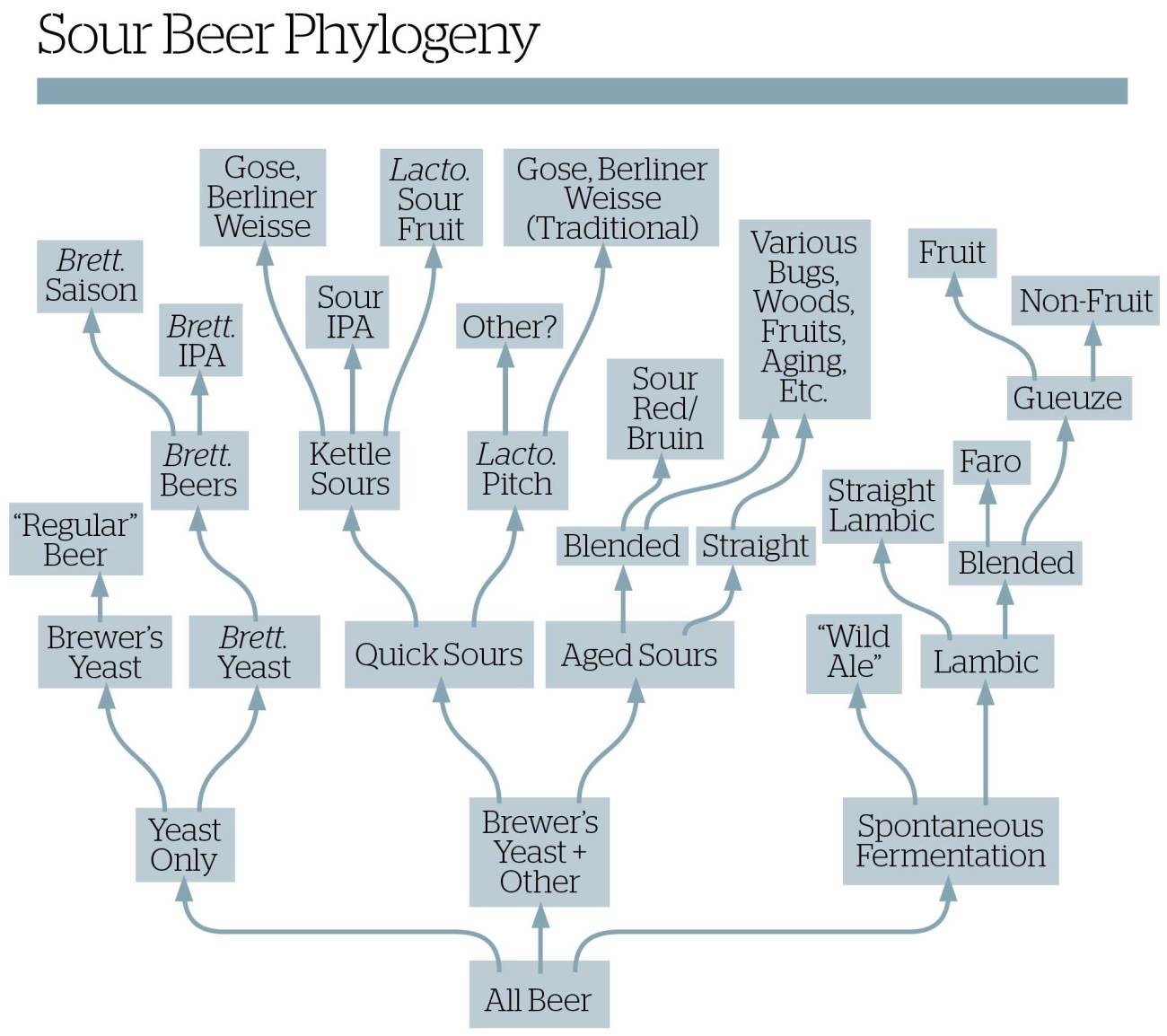 People often refer to the “funk” in many of these beers, and it’s a fine word as long as you see it as neutral and not invariably positive. There are a lot of funky-smelling things that I would not want to put in my mouth.

Let’s start with Brettanomyces aromas, which can be found in many wild and other complex sour beers, as well as in simpler Brett-focused ones. Most common is a distinct barnyard scent, called “horsey” by people who know what a horse actually smells like, and a sort of roasted-pineapple-candy note that always conjures (for me) a childhood memory of a Dum-Dum sucker offered as reward upon leaving the doctor’s office. Mousy or Cheerios character can come from Brett, Lacto, Maillard browning, and likely other sources as well, due to a family of chemicals called tetrahydropyridines (THPs). Most of these, fortunately, will age out over a period of months.

Lactic acid from Lactobacillus can offer up a pleasant sour-cream or yogurt note, which can add richness to kettle-soured weisse or gose. While we discussed acetic acid in the context of taste and mouthfeel, it is also a meaningful aromatic. While it’s clearly vinegary, I usually detect it as a whiff of pickle.

A chemical called methanethiol (methyl mercaptan) smells of old sewer pipe or garbage truck. It can add an unsettling note to kettle-soured beers, especially if the souring process is not well protected from oxygen. As a sulfur chemical, it’s super-potent, but not everyone can pick it up.

Continuing with the stench theme, butyric acid is usually described as either vomit or Parmesan cheese. There is, in fact, a famous scientific study on how people perceive it, based on which descriptor is used. Some liken it to rancid butter, but my perfect descriptor is the transparent handle of a quality screwdriver, commonly made from a stinky plastic called butyrate. This scent is easily confused with isovaleric acid, which smells like body odor and stinky cheese because it’s produced by bacteria inhabiting both ecosystems.

Acetaldehyde is a common beer off-flavor, most commonly associated with “green” or incompletely conditioned beer. I frequently find it in barrel-aged sours, sometimes at quite high levels. While it’s commonly described as either green or bruised apple, I find it chameleonic: wet grass, raw pumpkin, latex paint, and drunk breath all capture aspects of its essence.

Let’s not forget to look for the kinds of things you’d find in a conventional beer: esters, hop aromas, malty/cooked notes and yeast phenols—because they’re likely to be there, even though they may play a secondary role.

Oak brings some aroma, too, adding sweet-smelling vanillin as its lignin degrades over time and sometimes—especially in spirits barrels—a toasted coconut smell as well. Fresh oak can present dill and butyric notes, most strongly in American white oak barrels.

Quality is always an elusive characteristic in sour beers, and the extreme nature of these beasts makes them somewhat polarizing. And all sour beers are by no means created equal. The path to better appreciating them is to learn their sensory parts and pieces and observe how they’re assembled, then decide what suits your own personal taste and dive in.

Brewer’s Perspective: A Life Beneath the Cobwebs

Jean Van Roy, head brewer at Brasserie Cantillon in Brussels and heir to a 120-year-old lambic-brewing legacy, discusses his emotional approach and connection to spontaneously fermented beer—and his view on the new wave inspired by traditional methods.