Even experienced home cooks typically leave condiment needs in the hands of the professionals. House-made ketchup is never as good as the classic 99-cent bottle.

Excursions into artisan mustard often convince one that the Germans solved it generations ago. And what kind of maniacs work on their own dill relish? That’s pathological behavior. But there’s one big exception to this rule—barbecue sauce. The gloppy, easily scorched sugar bombs that line the store shelves have no place near your grill.

Barbecue sauce is one case where not only can you do it better than store-bought, but you can do it much better with minimal effort. You’ll never again suffer a carbonized chicken breast “marinated” in barbecue sauce—and hopefully your friends won’t either.

Scratch-made barbecue sauce takes about as much time as you spend waiting for the grill to heat up. And it pairs almost magically with the complex flavor profiles of your favorite craft beers—a winning combination that provides the perfect counterpoint for the fatty smoky delight that is slow-cooked barbecue.

And really, whether you’re going BBQ with Franklin’s Aaron Franklin and starting your cook by chopping wood or just hitting the switch on a gas grill after a long day at work, the right sauce is going to elevate the whole game.

Let’s start with the classic—K.C.–style sauce is the closest to the sticky sweeter bottled sauces to which everyone defaults. As such, it takes a lot of crap from your serious barbecue hobbyists. But the extra body and sweet tomato base give you ample opportunity to use something big and bold. After giving a few things a shot (including barleywine and barrel-aged stout because what the hey!), we figured out that an American robust porter fits the bill perfectly.

It expands on the tomato and brown-sugar sweetness without going cloying and suggests chocolate and roast without clashing. This is the perfect gateway sauce for those who might need convincing to ditch the bottle.

Combine the tomato sauce, porter, and cider vinegar and bring to a simmer. Whisk in the mustard, brown sugar, peanut oil, and seasonings. Bring back to a gentle simmer and let reduce slightly, for 30–45 minutes, stirring regularly and taking care not to scorch the bottom.

Remove from the heat, blend, and use right away. Store leftovers, refrigerated, in a clean airtight jar for up to a week. 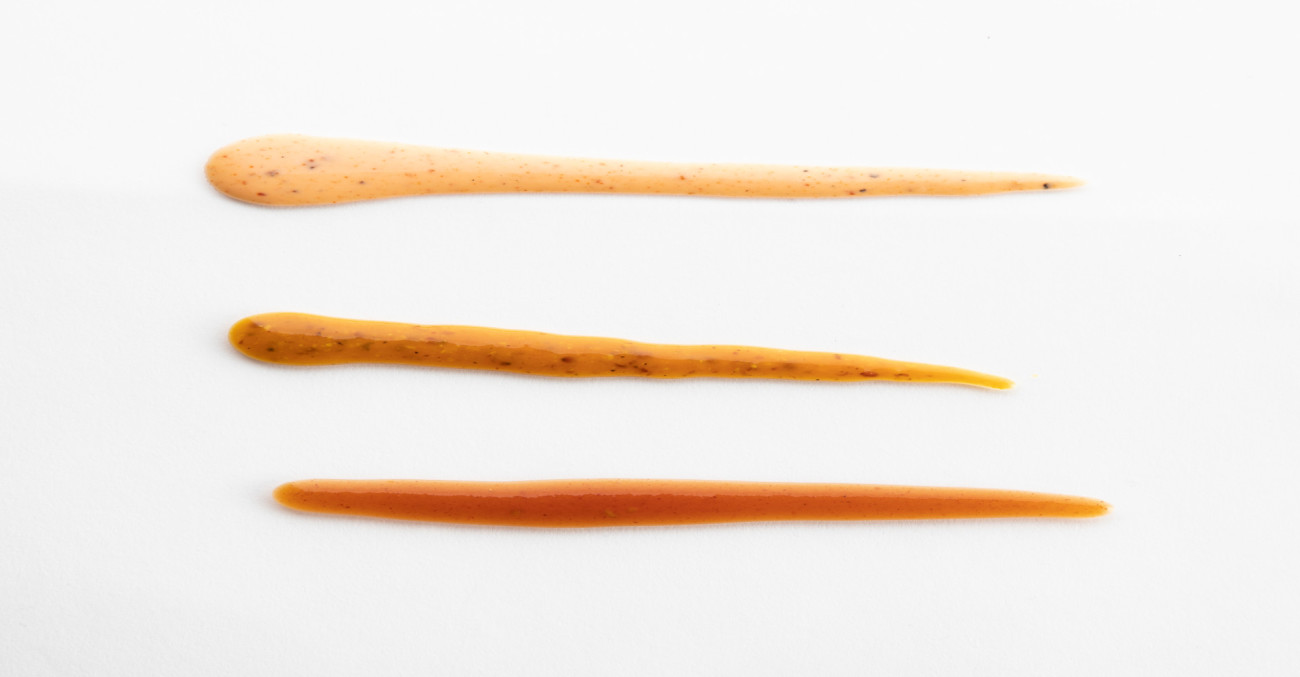 North Carolina barbecue sauce is a wonder with pork. It’s a thin, fragrant beast with a huge punch of vinegar to cut through the fatty unctuousness of the pork they do so well. The eastern part of the state tends to look down on the use of tomato products while the other half of the schism reaches for ketchup to color what is still a pretty thin and tangy sauce. The okay sauces bring sweetness and not much else. The great ones build unforgettable character out of a pervasive, unforgettable vinegar character. It’s the same kind of razor’s edge balance you find in an uncompromising blended lambic, where all the funk, the acid, and the ripe are on full display.

Were this sauce not standing up to the insane richness of pork shoulder, it might be a bit much. And yes, there are going to be Belgian devotees sputtering with rage when you throw a little Cuvée René or whatever in the saucepan. But this is a wonderful marriage—that unforgettable lambic spark brings a lot of the flavors that smoked meat fans always try (with only occasional success) to replicate with coleslaw on the sandwich. This recipe traditionally packs a bit more heat via red pepper, Tabasco, or other fiery agents. But toning it down just a bit to play with the lambic flavors gives the sauce incredible depth.

Makes: About 2 cups
Use with: Pork shoulder, pork belly

Blend the ingredients together, taste for seasoning, and adjust the heat level with the hot sauce.

Alabama White is a challenge as much as it is a condiment. When one thinks of cutting through the richness of a plate of barbecue, the mind doesn’t really conjure mayonnaise as one of the better ideas. But a gentleman from Alabama had a peculiar idea in the 1920s, and here we are. Diehards prefer it on pork shoulder, and it’s delicious on chicken as well. After a lifetime of red-sauce indoctrination, you’re predisposed to hate this one. Resist that impulse, and you’ll be rewarded with something unexpectedly addictive.

Provided you know a good local brewer turning out balanced session sours, that clean dry snap is just the thing for this rich yet tangy take. And if you’re in one of those places were they sell Duke’s Mayonnaise, you’re doubly in luck. And while this recipe is based on the classic church-cookbook template, we found that a little Korean chile paste in the mix takes the flavor to the stratosphere. Go with the classic horseradish if you’re a traditionalist or want to get that classic all-white look.

Whisk together, cover, and chill. The sauce lasts for up to 4 days refrigerated.

While its neighbor to the north offers vinegar- and tomato-based sauces, the history of German settlement in South Carolina created a decidedly mustard-forward third style of Carolina-based barbecue sauce. This one finds that perfect spot between the strong, spicy character of good mustard and the balancing sweetness of honey. The essential barbecue marriage between bitter, roasted, and sweet is tied together with a beer just as bold. We used doppelbock for its rich toasty flavors and malt-forward sweetness. It’s already one of the world’s near-perfect food-pairing beers, and as it turns out, the German classic makes a hell of a sauce, too. Don’t let another summer pass by without trying this sauce alongside a smoked sausage or a tray of game-derived charcuterie.

Mix the ingredients in a small pan and bring to a simmer over medium heat, whisking constantly. Reduce heat and simmer the sauce for 25 minutes. Remove from the heat, blend, and serve or store in an airtight container for up to 2 weeks.

Determining When to Add Farmed Ingredients to Your Beer (Video Tip)

Join Plan Bee Farm Brewery owners Evan and Emily Watson on their 25-acre farm to learn about when it's best to add special ingredients to your beer to impact aroma and flavor in a positive way.