Butch Heilshorn and Alex McDonald, cobrewers at Earth Eagle Brewings of Portsmouth, New Hampshire, are giving their customers’ palates a more adventurous experience with beers that replace hops with other less common ingredients.

Hops. Barley. Yeast. Water. Nearly every beer is brewed with those four ingredients and sometimes a few other relatively common ones.

That wasn’t always the case. In ancient times, brewers used herbs and plants they could find in the lands that surrounded them to balance out the sweet malt and to act as a preservative. They used ingredients such as catnip, galangal root, mandrake, mistletoe, mugwort, and spruce tips.

Those ingredients lost favor, though, when brewers discovered the magic of hops. Hops preserved beer far longer than the likes of sweet gale or chickweed, and hops provided flavors ranging from earthy and piney to plum and grass and even citrusy fruits, providing a balance to the malt. Today, hoppy beers are still the most popular beers in the craft-beer world, and nearly every craft brewer brews at least one version of an IPA.

But not every brewery has forgotten the old way. Earth Eagle Brewings of Portsmouth, New Hampshire, is a champion of gruits, the name given to beers that eschew hops for other less common ingredients. “It’s a pretty selfish thing,” says Earth Eagle Cofounder/Cobrewer Butch Heilshorn. “I’m not thinking in terms of what the world will like. I’m thinking about what would get me excited.”

Heilshorn and his brother-in-law Co-owner/Cobrewer Alex McDonald (McDonald married Heilshorn’s sister, Gretchen) became friends in the early 1990s. Both were beer geeks, and Heilshorn—inspired by his wife who is an herbalist—read _The Art of Fermentation, _by Sandor Katz, and wanted to brew. Heilshorn and McDonald set up a homebrew system and decided to brew a clone of Dogfish Head’s uber-potent World Wide Stout, using no hops. “It came out of the fermentor amazing, but it came out of the bottle like ass,” Heilshorn says.

Nonetheless, their interest in brewing continued. McDonald and his wife opened A&G Homebrew in Portsmouth, and then Heilshorn joined McDonald to open Earth Eagle Brewings, a nano-brewery, in a small adjacent space in 2013.

“We were both interested in brewing something that interested us. We didn’t want to just brew a brew and say, ‘This is our IPA, this is our brown ale, this is our pale ale,’” says McDonald, although Earth Eagle does brew some more common styles in addition to the gruits.

McDonald says, “The beauty of what we’ve done [with the gruits] is we have introduced people to something they’ve never tried before.” Although all are called gruits, each one tastes very different based on the ingredients used, Heilshorn says. The Antoinette, for example, is brewed with catnip, mugwort, and chickweed, while the Exhilaration is made with Labrador tea, sweet gale, and heather flowers. Same style, but different flavors.

Heilshorn, who brews most of Earth Eagle’s gruits, says that brewing a gruit isn’t really that much different from brewing the more common styles of beer. If anything, he says, it’s easier. “For a hoppy beer, everyone has these crazy hops schedules where they add hops at certain times,” says Heilshorn. “A gruit is a little simpler. I’ll do two additions. You don’t want to boil [the ingredients] for too long because you’ll lose the taste. If there are any medicinal effects, they’ll go up in steam.”

Heilshorn says that creating the various flavor profiles comes down to trial and error. He tries to find ingredients that he thinks have flavors that can blend together well. Some brewers, he says, will make tea to test the ingredients, although he has a more direct method. “I’ll be really careful about sniffing the herbs and chewing on them. If they have real strong flavors, I’ll chew both of them together at the same time to see if they work.”

They key to brewing a successful gruit is to realize that sometimes the beer may not taste exactly how you thought it would. “You have to be open and willing to learn,” says Heilshorn. “Sometimes it’s not easy because it’s not what you expect, but that’s okay. It’s fine to experiment. You have to play around with these things.”

Sometimes, however, ingredients don’t work. Heilshorn says he still has not been able to brew a beer that he has been happy about with horehound, an edible flower, even though others have enjoyed the horehound brews. “We’ve had a number of beers that we didn’t really like, and we’ve given them to our bartenders and they’ve loved them,” says Heilshorn. “We’ve dumped two or three batches. I think [horehound flowers] are great, but we’re still trying to dial them up.” 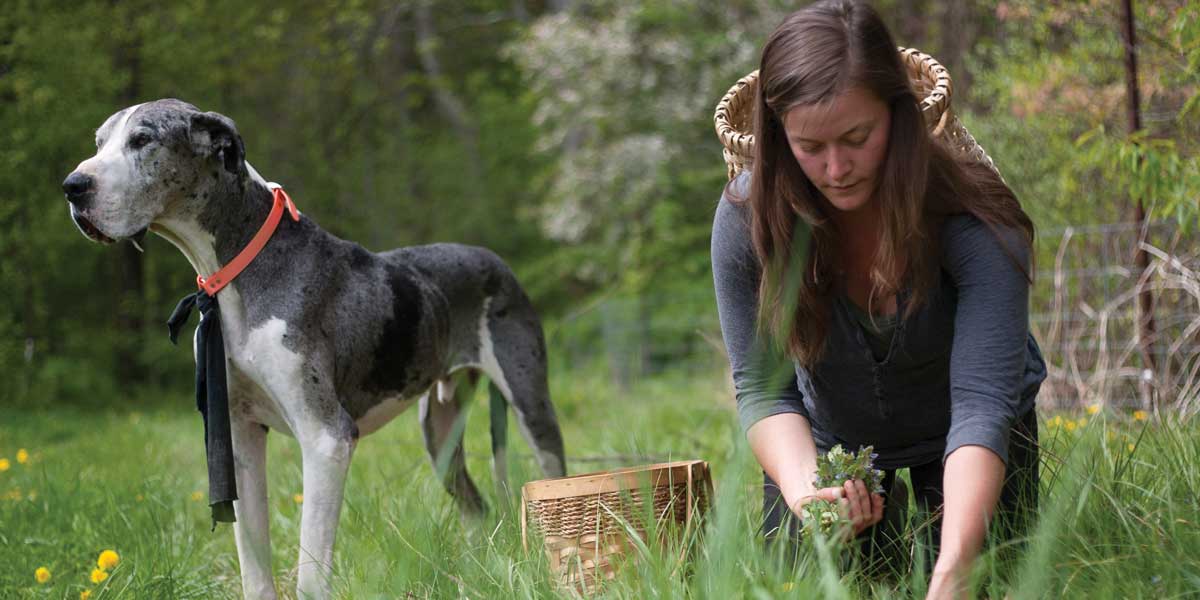 If a homebrewer wants to brew a gruit, Heilshorn says brewing with fresh ingredients is always preferable, but items bought online or in stores can work if a particular item is not available locally. Earth Eagle tries to use as many local ingredients as possible. To accomplish that, they work with local urban forager Jenna Darcy (pictured above), who goes into the woods and surrounding areas searching for fresh herbs and wild-grown flowers that may be used in the gruits. When winter hits New England, they resort to more mail-ordered ingredients and brewing with dried herbs. Someday, McDonald and Heilshorn hope to even have a better source of local ingredients. “Our dream is to put a garden on the roof,” Heilshorn says.

McDonald and Heilshorn also use some ingredients for which Darcy can’t forage and that people may find odd in their gruits—wild and farmed meat products. The pair have come up with beers brewed with a moose head (Bogmare, a meat gruit), beef and beef bones (Cap’n Beefparts, a porter, and Them Bones, a gruit made with beef bones), and even bear (St. Corbian’s Red, a sour gruit with bear meat). The brewery makes sure to let people know that these beers are not vegetarian/vegan friendly.

Earth Eagle’s brews are available in the taproom that is adjacent to the brewery. Although the gruits catch people’s attention, there are plenty of common styles of beers for those who want something more familiar. Along with New England Gangsta’ (the brewery’s most popular beer) and Ancestral—both IPAs, they have beers such as Black Adder (milk stout), Chiefy LaRoux (Belgian pale ale), or Kiichigo (a dunkelweizen brewed with raspberries).

McDonald and Heilshorn usually split up brewing duties. McDonald brews mainly the more traditional styles—IPAs, tripels, dunkels, witbiers. Heilshorn brews mainly gruits. People may be surprised, but sometimes they brew the styles the other one is known for, Heilshorn says. “[McDonald] can brew a great gruit, and I can brew a pretty good IPA.”

“As a beer consumer, I want to give my palate a more adventurous experience,” says Heilshorn. “It’s great that we’re able to do that for people.”