With 300 days of sunshine per year, one of the largest concentrations of craft breweries in the United States, and the granddaddy of craft-beer festivals, Denver, Colorado, has a long history as a beer travel destination.

With 300 days of sunshine per year, one of the largest concentrations of craft breweries in the United States, and the granddaddy of craft-beer festivals, Denver, Colorado, has a long history as a beer travel destination. But brewers in the Mile High City refuse to rest on their laurels, and a new generation is pushing creativity and diversity to even higher highs.

The first thing you notice about Denver is the oxygen, or lack thereof. At a mile above sea level, you can lose your breath walking up a flight of stairs, and that beer you drink might hit you a little sooner and a little harder than it would at lower elevations. But that’s a small price to pay for the variety and quality of brewers who call Denver home.

“The craft-beer scene in Denver is becoming more diverse all the time,” says the Colorado Brewers Guild’s Steve Kurowski. “We’re seeing small breweries with tasting rooms open up all over the city, serving some amazing small-batch beer to their neighborhoods, as well as brew pubs with thoughtful food pairing and menus to complement house-made beers.”

This explosion of “local” means there’s hardly a neighborhood left in Denver without its own brewery, but the pressure is on new brewers to produce high-quality beer because the bar has been set so high for so long. Whether you’re into wood-aged sour beer, bright and hoppy IPAs, traditional English styles, Belgian-style ales, or even heavy metal, there’s a brewery, beer bar, and package store for you.

The venerable Falling Rock Taphouse (pictured at top) is not only a must-visit while in Denver, it’s a cultural touchstone—a shared experience that instantly bonds you to legions of craft-beer fanatics who have passed through the same doors, experienced the same surly bartenders, and marveled at the phenomenal tap exclusives Falling Rock gets as a result of cultivating three decades of friendships in the craft-beer world. If it’s on tap, try the New Belgium Rock Star Blend, a special sour blended from the foeders of New Belgium just for Falling Rock and its LoDo neighbor, Star Bar.

Star Bar, a hipster “dive,” always has a killer list of taps and bottles, a comfortable patio, skeeball and foosball, and karaoke a couple of nights a week. One block away is the retail institution Mr. B’s—it pulls out all the stops for GABF with special bottle releases all week making it a necessary stop for rare beer hunters.

Great Divide Brewing is only a few blocks away. Step up to the bar in the clean and modern taproom, order tasters of Yeti imperial stout variations, grab some food from one of the food trucks perpetually stationed out front, and chat with the bartender about the expansive new facility being built in the River North neighborhood.

If you’re hungry, check out Wynkoop Brewing Company (Colorado’s first brewpub founded in 1988 by now-Governor John Hickenlooper) and enjoy an upscale take on pub food (try the short rib poutine if you’re so inclined). A few blocks over on Blake Street, Freshcraft combines a killer tap list and reserve bottle list with a creative kitchen, and you never know what beer “celebrity” you might end up sitting next to. For a tightly curated beer list and food that will challenge and excite you (think pig ears and bone marrow as well as a full lineup of house-made charcuterie), don’t miss Euclid Hall.

Find other beer destinations, dozens of beer reviews, and practical advice and tips for getting the most out of your brewing in every issue of _Craft Beer & Brewing Magazine®. _Subscribe today.

Denver has pockets of cool neighborhoods all over the city, and Tennyson is one that’s definitely worth a visit. On the north end, stop by Small Batch Liquors and pick up hard-to-find bottles from breweries such as Glenwood Springs–based Casey Brewing & Blending. Grab some pizza from Hops & Pie, a few blocks south, and open up the trapper-keeper beer list to ogle the reserve beers from Crooked Stave, Cascade, Almanac, and others. If you time it right, don’t miss one of Hops & Pie’s “Littlest Big Wild & Sour Fest” events with kegs of Cantillon, Russian River, Tilquin, The Bruery, Jester King, and more. 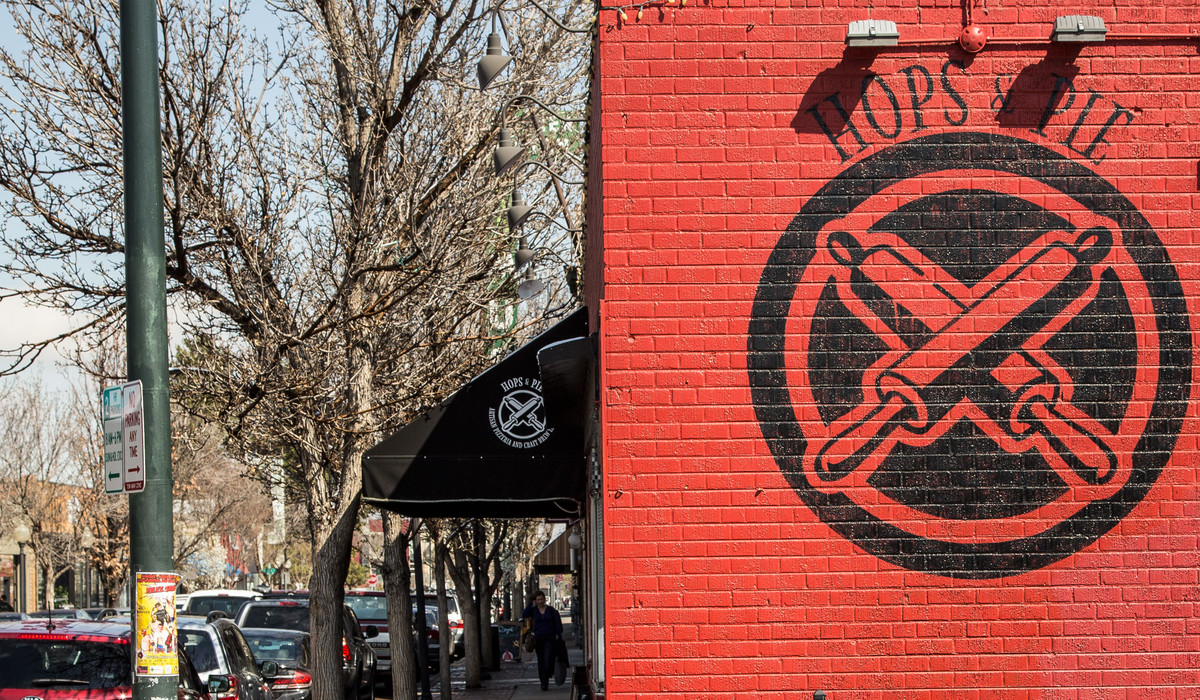 For an entirely different beer experience, visit Hogshead Brewery farther down Tennyson. Its focus on traditional English-style beers and cask ales is a pleasant change of pace.

It’s a harder sell to get visitors to venture out of the Downtown/LoDo/River North area of Denver, but those who do are rewarded with a few real Denver gems. Copper Kettle Brewing is located in an otherwise nondescript office and warehouse complex, but since it opened in 2011, it has developed a reputation for well-executed beers such as the Well Bred barrel-aged barleywine and the GABF gold-winning Mexican Chocolate Stout. The taproom regularly offers small-run specialty beers such as rum barrel-aged Pumpkin Porter. 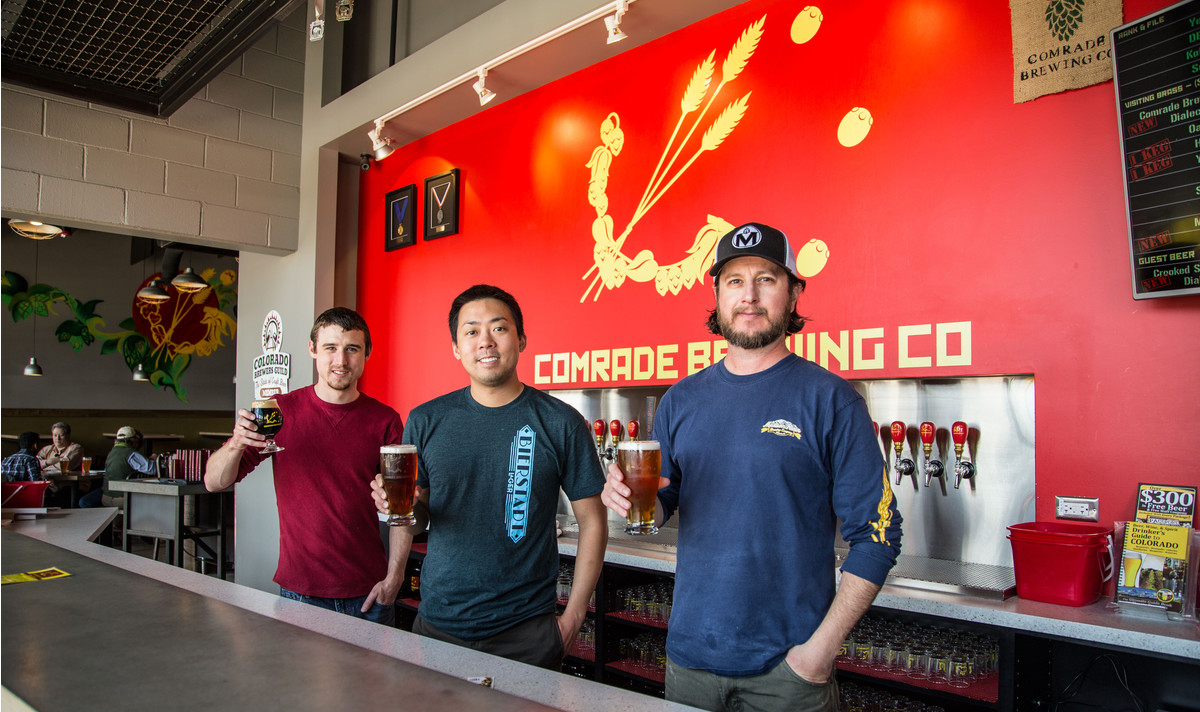 Just down the road from Copper Kettle, newcomer Comrade Brewing has made a huge splash in its first year of operation, landing on many Colorado critics’ best-of lists and earning a silver medal at the GABF for the Superdamp fresh hops IPA. Its hoppy beers (Superpower IPA, Putsch Black IPA, Hop Chops DIPA) and expansive but friendly taproom are worth the extra drive from downtown.

If you prefer your beer and pubs English-style and have a thing for kitschy seventies décor, stepping into Bull and Bush is like a time warp back to the first time you walked into a Steak and Ale—except that Bull and Bush has won a dozen medals at the World Beer Cup and GABF since their mid-nineties inception. The beer is fantastic and anything but kitsch. 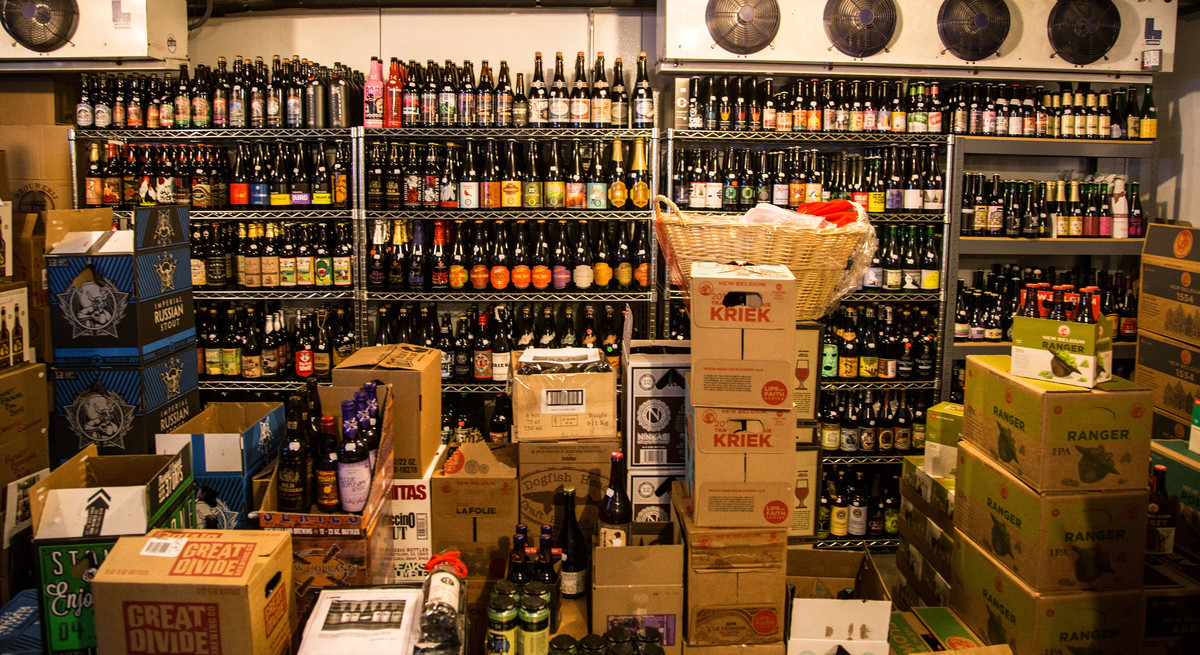 While in that vicinity, beer hunters will want to take a detour by Grapevine Wine & Liquors. But don’t stop at the cooler doors; ask the staff, then walk back into the cooler for expansive racks of hard-to-find beer. The beer buyers love to have fun with customers, holding beers such as Bourbon County Brand Stout, then putting bottles on the shelves in random places and at random times, making every visit a quasi-Easter-egg hunt.

Things are heating up in the neighborhoods south of downtown. Huge apartment and condo developments are reinvigorating former industrial properties, and a number of breweries have moved in along with them. One of the southernmost, Former Future, implores visitors to “Embrace Good Taste,” and the stylish taproom interior (complete with a bar built from an airplane wing) is a comfortable locale in which to enjoy its creative brews. It has successfully tackled wild/spontaneous ales with its Black Project series, but the mainstay beers are well executed, and the very small brewhouse open to the taproom leaves nothing to hide. 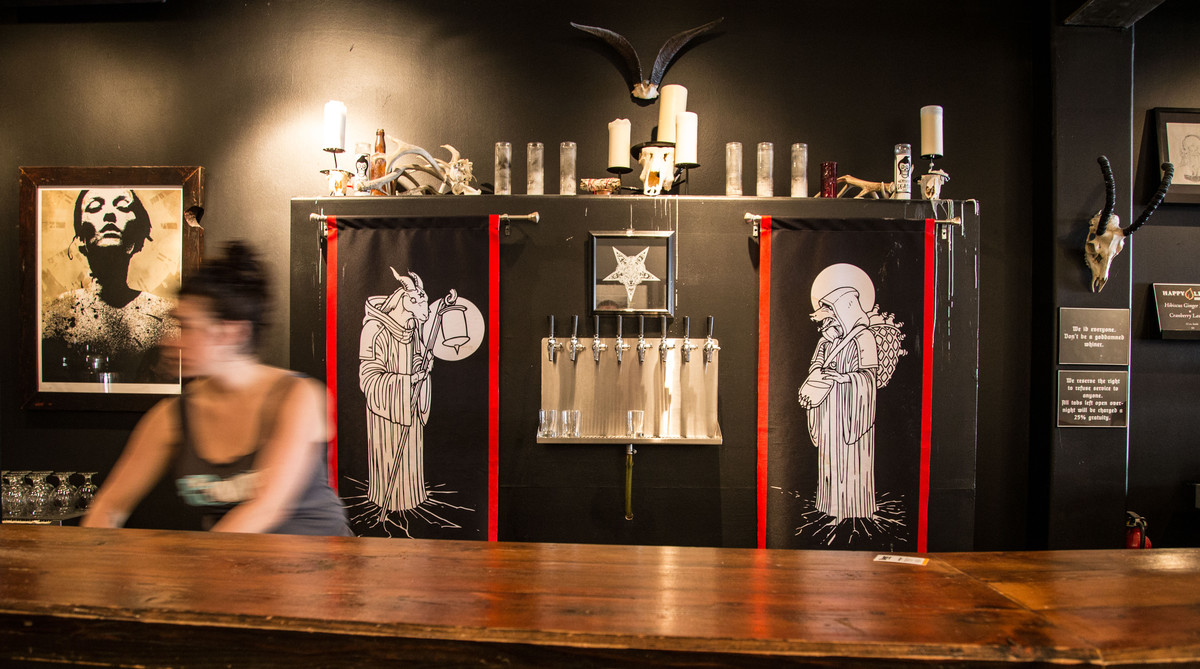 The most “unique” brewery in Denver, Trve Brewing, sits in a nondescript block of South Broadway. The black walls, skulls, pentagrams, candles, and doom metal soundtrack immediately tell you that this brewery is unlike just about anything else you’ve experienced, but the beer itself is remarkable for its contrast to this extreme taproom vibe—sessionable core styles that they continuously work to perfect, rather than brewing a succession of one-off specials. The result is a taproom that transcends the metal style and attracts everyone from bearded metalheads to well-dressed business women.

No trip to Denver would be complete without a visit to Breckenridge Brewery, and the facility on Kalamath is only a few blocks from Trve. The beer is fresh, the barbecue is legit, and it’s a great place to grab a plate of meat and pint of the Vanilla Porter or 72 Imperial Chocolate Stout. Construction is underway on its new farmhouse-style brewery farther south in Littleton (which will be another must-visit once it opens). 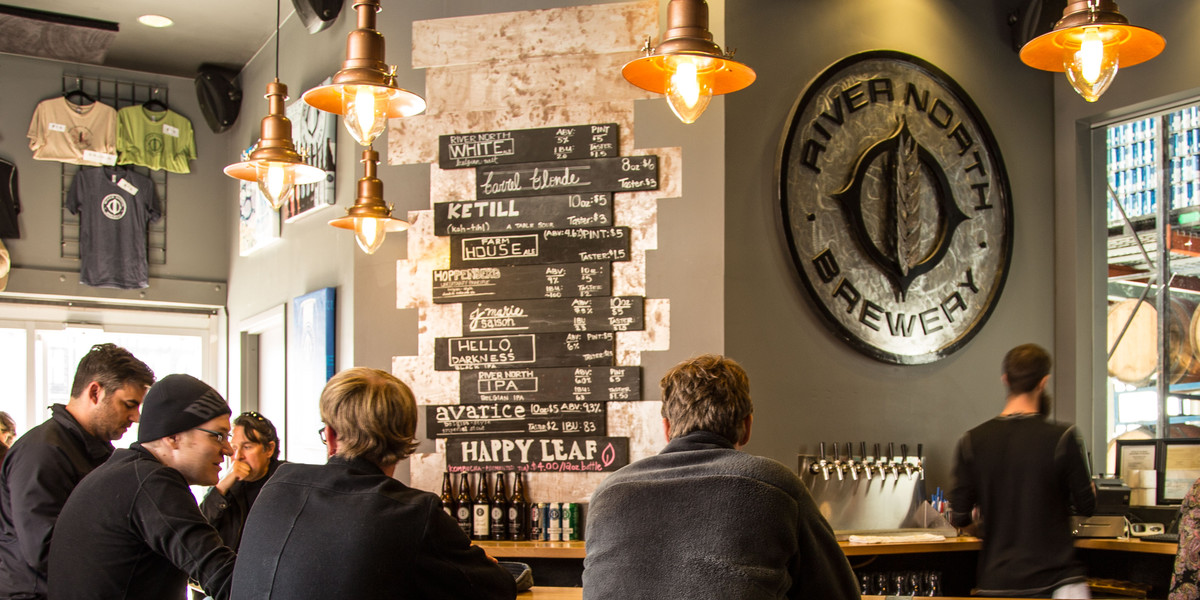 There’s no doubt that some of the most aggressive growth in the Denver beer world is happening on the north side of downtown, in the former industrial buildings of the River North district. Start at the eponymously named River North Brewery on Blake (only a few blocks north of Falling Rock), pull up a seat in the cozy taproom, and try one of the Belgian-inspired offerings such as J. Marie farmhouse ale or Quandary Quad. 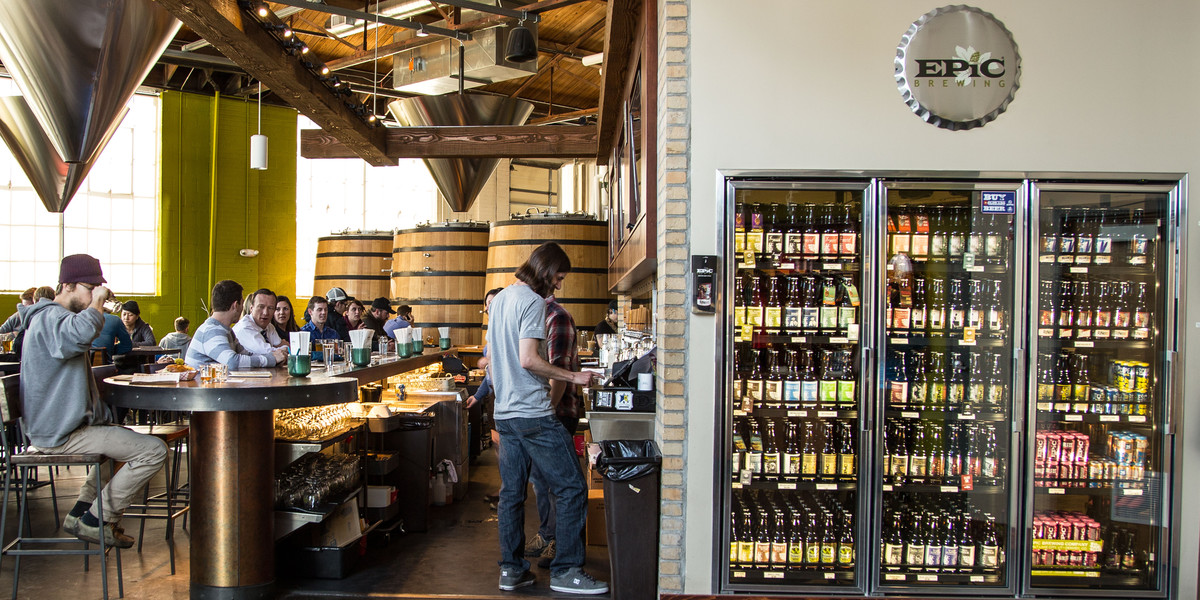 On the other side of the tracks (the River North district is bisected by a rail yard that makes getting around a bit tricky), newcomer Mockery Brewing is making a name for itself with creative beer, a comfortable patio, and a well-designed taproom that showcases its 15-barrel Premier brewhouse. The Oaked Southern Hemisphere Black Pale Ale sounds like a disaster but tastes fantastic, and the Salted Scotch Ale has a malty body but clever dry finish that avoids clichés. 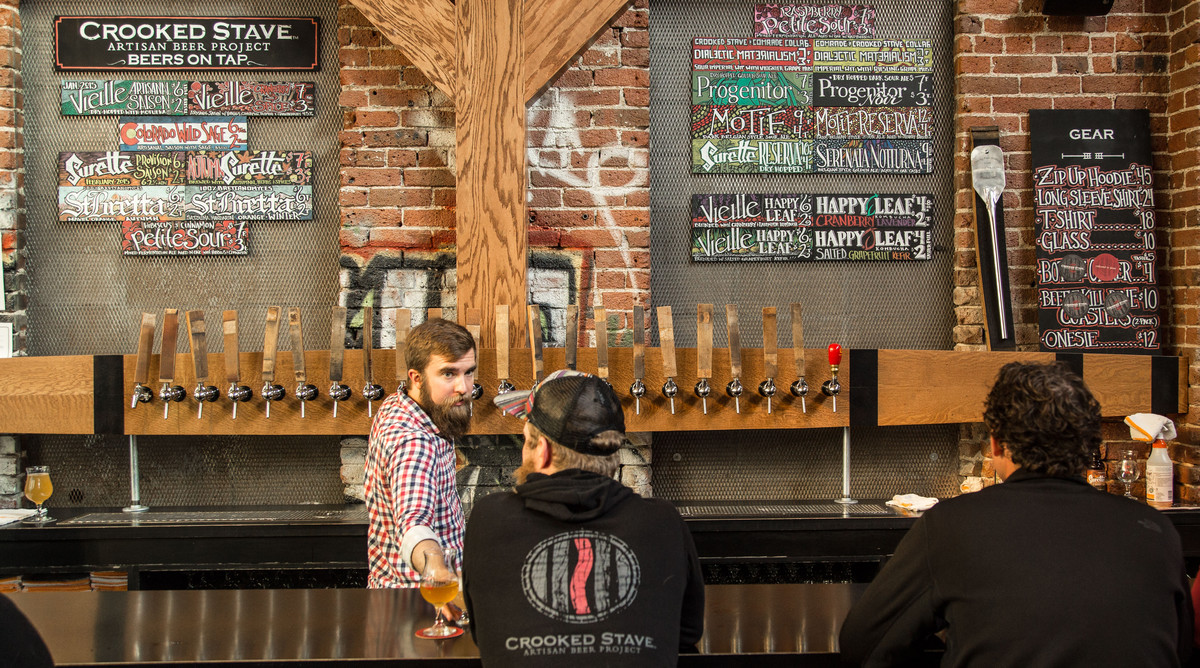 For the ultimate finale in River North, it’s essential to stop at the Crooked Stave Taproom at The Source. The mixed-development building is home to restaurants Comida and Acorn, a butcher, a bakery, a coffee roaster, a liquor store, and a design gallery in addition to Denver’s temple of sour and wild beer. With the brew system now relocated to the barrel cellar (a few miles away), the taproom has plenty of space for the crowds that line up daily for the twenty-plus taps that feature everything from 100 percent Brett-fermented saisons to dry-hopped dark sours and fruited petite sours.

With its laid-back outdoorsy vibe, supportive beer-drinking audience always willing to try new things, and favorable laws that make it comparatively easy to launch a brewery, Denver has become an incubator of sorts for new craft breweries. But success requires great beer and a great environment because the bar for competition is so high. The only question now is when the city will reach saturation.

“I think every neighborhood deserves a brewery—it’s like the afternoon coffee shop, a great place to meet friends, family, and colleagues,” says Kurowski. “Craft breweries bring people together.”

If you’re up for a bit of a drive, these two spots aren’t in Denver proper but are definitely worth a visit.

It’s a bit of a haul out to Aurora, but you should treat yourself to one of Dry Dock’s very well crafted barrel-aged beers at their South Dock location. It’s a testament to the selection available in the Colorado market that these beers last more than a day on store shelves. If the drive is too much, pick up a bottle of Bligh’s Barleywine (or any of the Signature Series beers). You won’t be disappointed.

This Lakewood liquor store is worth the drive for its extensive selection of hard-to-find bottles. Its “Notes from the Cooler” blog noting new arrivals has fallen off since former beer buyer André DiMattia left to join Crooked Stave’s distribution arm, but its Facebook feed is quickly updated as new beers arrive.