Here are 6 tips to help you get started barrel aging your own homebrew.

Barrel aging opens up a wide range of flavors to patient homebrewers. From how to source barrels to aging on fruit, award-winning homebrewer Neil Fisher offers these helpful tips to get you started barrel aging your beer.

1. First, You Need a Barrel

Demand from commercial brewers has driven up prices on standard 63-gallon wine and 53-gallon spirits barrels, but smaller boutique distillers frequently use 10–15-gallon barrels that are unsuitable for the volume of commercial brewing yet are the perfect scale for many homebrewers. Neil Fisher, from Greeley, Colorado, approached several local micro-distilleries and found one willing to sell him recently emptied whiskey barrels for a reasonable price. The key when approaching these micro-distilleries is time—to get the best flavor from the barrel, it’s ideal to fill it with beer within a day or two of when the distiller emptied it. The more spirits that remain in the barrel, the better—they’ll keep the barrel sanitary. In the event that you can’t fill the barrel immediately, Fisher recommends keeping the barrel “wet” by using handles of off-the-shelf whiskey, rather than employing more dramatic methods such as sanitizers, hot water, or steam (roll the barrel at small intervals over time to keep the interior evenly coated with spirits).

Homebrew clubs are another great avenue for procuring barrels—many clubs have built relationships with local distillers and commercial brewers and receive offers when barrels are available (Odell Brewing offered Fisher’s club his Woodford Reserve bourbon barrel, and Crabtree Brewing has donated several barrels as well). For those who would rather dabble than commit, many clubs collaborate on club beers to generate enough volume to fill a 53-gallon barrel. The Fort Collins club, Liquid Poets Society, has brewed several such beers, with members filling a barrel at nearby New Belgium Brewing, but it would be just as easy to procure the more common 53-gallon barrels and fill them in a club member’s basement. Barrel brokers often give discounts based on order volume, so (as a club) it can be effective to approach a local brewery and add to their barrel orders rather than approaching a broker as an individual.

New oak barrels are commonly available from homebrewing retailers, although these will impart different flavors to your beer than barrels previously used to age spirits. Don’t bother trying to “condition” these barrels with commercial spirits, but they can be an effective option for those homebrewers who focus on barrels as souring vessels.

2. What’s Good for the Goose

Generally speaking, expect one effective use from a used spirits barrel. After that, don’t expect the same barrel to impart similar spirit character to your beer. Fisher has used barrels for as many as two “clean” beers (following Goose Island’s approach in which they age Bourbon County Brand Stout in first-use whiskey barrels and then age King Henry and Bourbon County Brand Barleywine in those second-use barrels). After that second “clean” use, Fisher moves the barrels over to the sour side of his basement room and lets them embrace the funk, as the spirit character is all but gone. 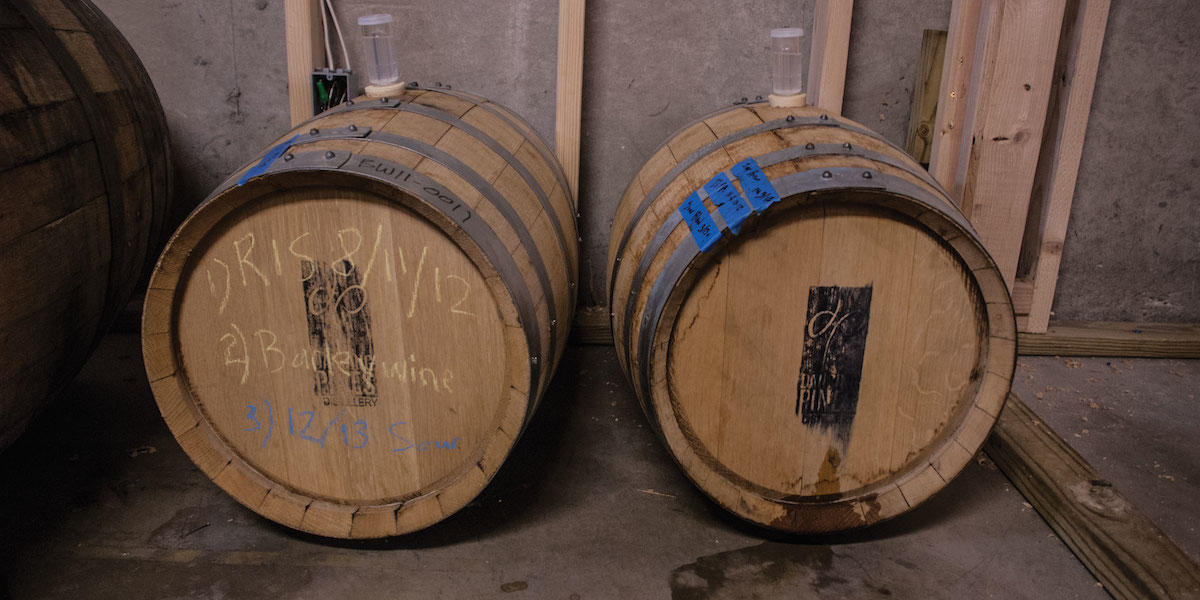 Achieving great results with barrel projects requires patience, and it generally requires more than one barrel. Homebrewers can take a cue from commercial brewers in this regard—few commercial brewers release “single barrel” beers because blending gives them more opportunity to imbue their finished beer with a broader range of flavors.

The other method that Fisher uses is racking soured beer out of his barrels into 5-gallon carboys, then conditioning that soured beer on fruit additions (below). He does this in glass because it’s easier to clean glass than his wooden barrels and because it reduces the commitment to a single fruit. It’s more interesting to pull several 5-gallon carboys out of a 63-gallon barrel (or a blend of several barrels) and condition each on different fruit rather than committing an entire barrel to a single fruit. 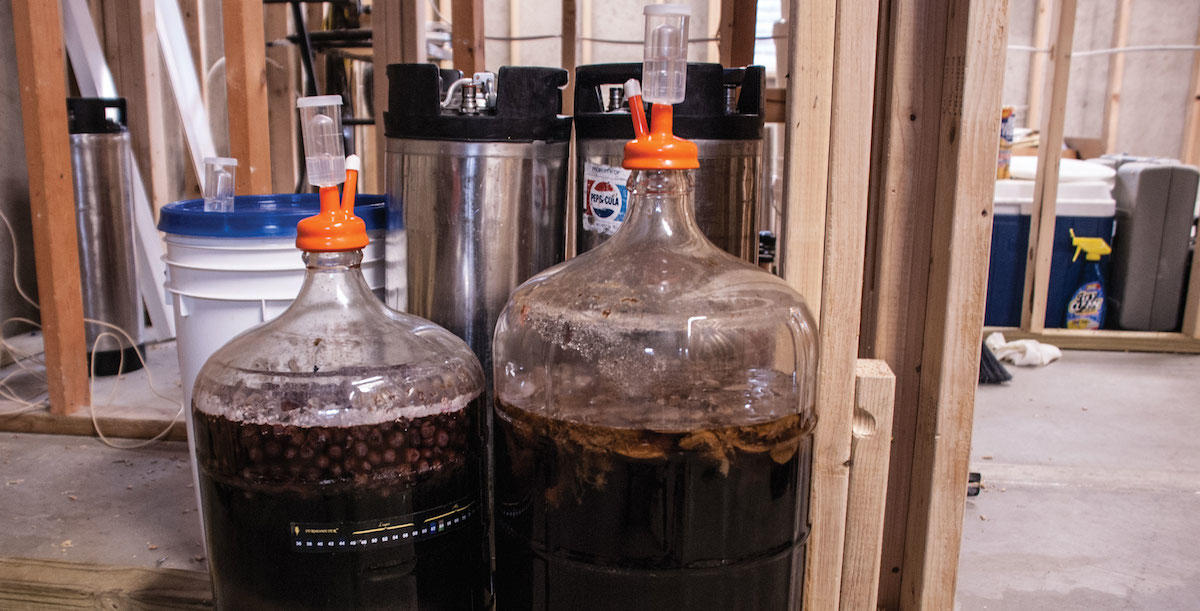 When he pulls beer out of a barrel, Fisher is quick to replace it with fresh beer to minimize the opportunity for oxidation in the barrel or the development of acetobacter. This results in some barrels aging via the solera method, where a portion of the base beer has been aging for several years, and fractional amounts of new beer replace the beer he removes from the barrel. This allows the souring bacteria culture to maintain itself, with a consistent supply of new beer for the bugs to feed on.

3. Taste It, But Be Patient

When Fisher first started barrel aging beers, his excitement led him to taste the barrels every week. But over time, he’s learned that the timeframe necessary for significant change to the beer is much longer than that, and he’ll now let the beer go several months between tasting.

Like most commercial brewers, he uses a stainless steel drill bit to put nail holes into barrels, and stainless steel nails (often referred to as “Vinnie Nails”) to plug those holes. He sanitizes the nails after taking samples, spraying the area down with StarSan.

The rate at which “clean” beer will take on the character of a spirit barrel can vary widely, and with smaller spirit barrels Fisher is cautious to taste more often. His first batch in a 5-gallon whiskey barrel took on a huge barrel flavor in only two months, due to the larger surface area contact afforded by the smaller barrel. By contrast, a 55-gallon barrel might take six months to achieve the same barrel flavor.

There’s no predicting when a particular barrel will be ready. “We let the barrel tell us when it’s ready,” says Fisher. “Patience is the most important part of barrel aging, and that can be hard for many homebrewers who are used to more rapid gratification.”

4. Getting the Most Out of Fruit Additions

Fisher has tried many methods of adding fruit to his sours and has experimented with pluots, blueberries, peaches, mangoes, nectarines, blackberries, raspberries, and more. He initially tried pureeing fruit before conditioning it, but that didn’t achieve the fruit flavor profile for which he was searching. Fruit skins can contain bacteria of their own, no matter how well you wash them, and some commercial brewers now add their fruit additions into the whirpool to let the heat of the wort sterilize the fruit, while others pasteurize fruit puree before adding it. Fisher prefers to clean then freeze his fruit before adding it to the beer, as that has produced the best results.

Fisher adds fruit in a series of two additions, starting with an initial 3-month conditioning after which he racks the beer into a new carboy and adds fresh fruit for another three weeks before kegging.

Homebrewers have a distinct advantage over commercial brewers in that most homebrew does not need to remain shelf stable over a longer period of time. No commercial brewery wants a customer to cellar a beer and end up with a gusher (a bottle with overactive bottle conditioning) or a “clean” beer that’s clearly gone sour. But since those souring bacteria take so long to do their thing, infection isn’t an issue for someone who will consume all of a given batch within 2–3 months.

Still, Fisher works to protect his non-sour beers from infection by using separate transfer equipment for the sour and non-sour beers. He has two sets of wine thieves and auto-siphons, and keeps dedicated lines within his kegerator just for sours.

Both the sour and non-sour barrels are co-located in a single room in his basement, and he hasn’t experienced any issues with cross-contamination over the past three years. “I try to be smart about spills and sanitize them quickly, plus I keep the barrels on opposite sides of the room,” says Fisher.

Fisher has modeled his approach on that taken by commercial brewers, where the barrels and the characteristics they impart are additional “ingredients” in the overall formulation of his beer. Just as he adjusts his malt bill to give his beer certain character, so he’ll blend base beer from multiple barrels to achieve the taste profile he’s looking for.

Over the past several years, Fisher has found that the process of barrel aging beers is less intimidating than he initially believed it to be, and the results speak for themselves. He’s won awards in homebrew competitions for both his sour and non-sour barrel-aged beers, and his barrel-aged Russian Imperial stout was selected as the Pro Am winner by Colorado’s High Hops Brewery in a recent competition. Neil has shared recipes for some of the base beers that he uses for barrel aging—his “Reclamation Red” that forms the base of his burgundy sour beers, as well as his “Alexander the Blessed” Russian imperial stout recipe that forms the basis of his bourbon-barrel-aged stout.

Where to Buy Barrels

In Craft Beer & Brewing Magazine®’s Wood Aging Your Beer class, you'll learn how to use wood for its unique flavor contributions, as well as for its ability to host a wide range of souring microorganisms. Sign up today!

Here are three things you need to know about prepping a barrel for aging beer.