The Belgians, who gave the world Tintin and the Smurfs, love their comic books and cartoons. They do not necessarily love it when brewers make cartoon caricatures of their beers.

Okay, so there are some credible American-made, Belgian-inspired beers out there—even a few great ones. Unfortunately, there are also a lot of silly ones: sweet, spiced, boozy, under-attenuated, under-hopped, under-carbonated.

For the moment, let’s set aside the question of why an American would feel the need to brew a “Belgian-style” beer. Maybe it is homage, maybe inspiration, or maybe it is trading on a name with proven selling power. Maybe it is all of the above.

Here is the greater problem: Many of you are not doing it very well.

“You know, it’s not because coriander is added, that something can be called Belgian,” Antwerp-based serial taster and international beer judge Joris Pattyn told a California brewer one day in Bruges, when asked for an opinion on his American-made abbey-style tripel. That was immediately after the Belgian had sampled the brewer’s excellent IPA.

“He probably had to stomach that,” Pattyn said. “But next day, at the festival, he comes to me and says: ‘Thank you for liking my IPA, and thank you for not liking my tripel!’ That says it all: Many U.S. brewers are overenthusiastic and too easily satisfied. But as a rule, they accept criticism and remarks, and will try to improve.”

Ready for some criticism and remarks?

Great Belgian beers are (often) unspiced. Yes, many of Belgium’s most famous beers have a dab of spice. These include a few world classics—such as the dark strong ales of Rochefort and their light touch of coriander. 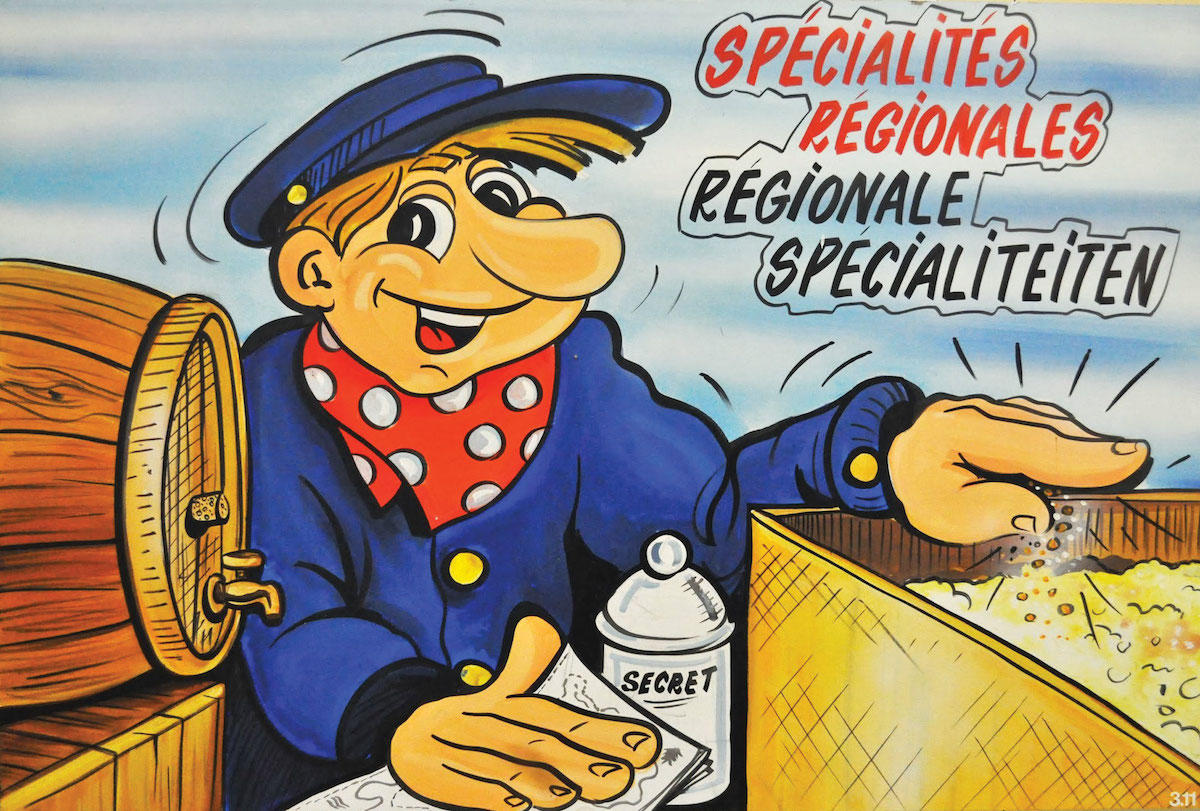 On the other hand: Many of Belgium’s greatest beers are totally unspiced. And many of its worst beers take a ham-handed approach to throwing nonsense into the kettle.

Maybe Americans have followed the wrong examples. Or maybe the knowledge that Belgians sometimes spice their beers lends itself to an excess of creative license. “Add to that the old U.S. adage ‘more is better,’ and you might have an inkling of the issue at hand,” Pattyn said.

Our best advice: Whisper the word “coriander” over the brew kettle, and bow in the direction of India. You will get more credible Belgian character from the four tips below than anything found in your kitchen pantry.

Our second-best advice: If you feel it absolutely necessary to spice—for example, you want a traditional Hoegaarden-style Witbier—start with the teeniest amount. The goal is to add complexity, not to make a beer that actually tastes like the spice you are adding.

Hops use could be an article, or a book, unto itself. I will try to be brief. Hoppy beers have been around in the Low Countries for about 700 years, but for a while, it was hard to tell. The modern stereotype of Belgian ale as lightly hopped is based on a historical quirk. For a relatively short period in Belgium’s history—from post–World War II to the Cold War—many “specialty beers” leaned sweeter and stronger, both to differentiate themselves from wildly popular lagers and to appeal to a few generations of Coke drinkers. That period overlapped with the beginnings of the international craft-beer movement—even helping to spawn it. Sweeter imports such as Leffe were among the first that Americans discovered in the 1980s, unlike anything they had tasted before.

But the craft-beer movement has many vectors, and one of its hallmarks is a greater appetite for lupulin. Belgians are not immune. These days many Belgian craft brewers are as inspired by their own hoppier history as they are by American IPAs.

Not that hoppy beers ever really disappeared from Belgium. Saison Dupont is archetypal, and the Westmalle Trappist Dubbel and Tripel have an underappreciated hops character that countless imitators—including many Belgian ones—seem to miss. But there has been something of a hoppy renaissance gaining steam over the past twenty years.

De Ranke’s XX Bitter was an early example, often mislabeled as a “Belgian IPA” when it bears more resemblance to the rustic farmhouse ales of yore. A more recent example of the trend comes from the Vandewalle nanobrewery in Lo-Reninge, West Flanders. Historian-brewer Chris Vandewalle’s Bitter Blond is based on ales enjoyed by seasonal farm workers of the Yser River valley before World War I tore the region apart. He chucks in local Poperinge hops to the tune of 40 IBUs.

This is not to say that you will win competitions with 65 IBU dubbels and witbiers. You won’t. Balance matters. But for now let us blast the myth that Belgian beers are not hoppy, and let that wreck sink to the bottom of the Atlantic.

Mashing is another topic that could fill a textbook. We can’t cover it all, but let’s begin with this: Belgian brewers do multi-step mashes.

And I repeat: Belgian brewers do multi-step mashes.

Also, they do it with less modified, Continental malt—European malt for European beers. 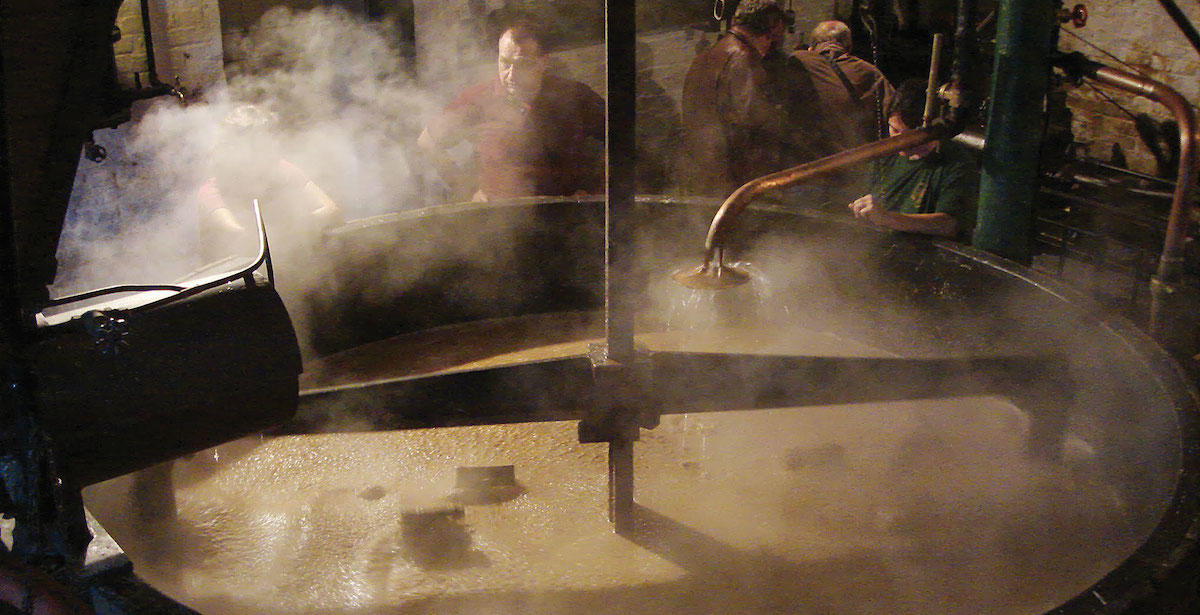 Now let’s back up. Think of the great Belgian ales you have met in your life—that pillowy head of thick foam that looks like meringue as it lasts through the whole glass; that structured body carried on sparkling carbonation that accentuates dryness.

How many American-made beers claiming to be Belgian-style really achieve that kind of head retention and mouthfeel? There are some, but not many. Far too often, brewers are mashing most or all of their beers at the same single temperature—and often carbonating them the same as other styles—counting on “Belgian” yeast to work all the magic. You can make tasty beer that way. But it has nothing to do with Belgium, where presentation matters.

There is nothing wrong with single-temperature mash per se. There are pragmatic and economic reasons for it, and it’s ideal for our well-modified malts. Most of us do it at home. And to be fair, mashing well-modified malts at a lower temperature, say 146–149°F (63–65°C), can get you pretty close. Will you get exactly the same result? No. It’s different malt and a different process.

One of the best caps of moussey foam in the business comes from the hilly, wooded Ardennes region, out of a little village called Achouffe. That is where Chris Bauweraerts—a modern craft-beer pioneer on Belgian soil— started brewing and selling La Chouffe in 1980. So we asked him.

“It makes no sense to brew ‘Belgian-style beers’ with only one mash temperature,” Bauweraerts said. “The one-mash-temperature works, of course, but then the beer has a bad . . . head retention, and probably the beer has a lack of body. American or British beer consumers don’t care very much about a nice mouthwatering and inviting head on the top of a glass of beer. But Czech, German, Belgian, French—in short, the brewers of the Western part of the European continent—want a nice head on their glass of beer. A nice head is part of the Belgian beer culture.”

Best advice: Use less-modified Continental base malt and try a protein rest with one or two other steps to promote attenuation and fermentability.

Second-best advice: If you must stick with a single temperature, choose a lower temperature for higher attenuation, using some wheat or CaraPils to help boost the foam.

4. Don’t hold back on carbonation.

There are two important points to make here: First, the best Belgian ales are bottle-conditioned, not force-carbonated. I’m sorry to be the one to tell you, but the seemingly sensible mantra—“CO2 is CO2”—is a fib. Bottle conditioning is a different process that contributes to a different appearance, mouthfeel, and evolution in flavor. It also leads to a longer shelf life. Yes, there is risk that drinkers will upset your bottles before they pour, leading to a glass of beer that is not as clear as it could be when poured under optimal conditions. I suggest that brewers who obsess about consistently crystal-clear beer stop and think about whether this whole craft/artisanal thing is really for them.

The second point: Lots of sharp little bubbles. Belgian ales tend to be highly carbonated, one of those tricks affecting both mouthfeel and presentation. Most of the all-stars are well over 3.0 volumes of carbonation. Important to note: You will want thicker bottles, as most shell-thin American ones are reliable only up to 2.5 volumes or so.

Stan Hieronymus recorded a few key examples in Brew Like a Monk (Brewers Publications, 2005): Westmalle goes to 4.0, Duvel to 4.25, and Orval goes as high as 5.0. As an exercise, pour these beers aggressively down the middle of the glass and wait for the bubbles to calm down, killing some of that carbonation. Then taste it. Is it yummy? Sure. Is it the same experience? Not at all.

5. Yeast is not nearly as important as you think.

Brewers are often a little too concerned with the origins of their yeast strains. Yeast catalogs have become vaguely pornographic, catering to every fetish. We are past due for a postmodern view on yeast and fermentation.

The modern view is that yeast makes beer, scientifically tied to the place from whence the yeast originally (supposedly) came. The postmodern view is more empowering, although some will find it hard to accept. It holds that you make beer. And that beer is whatever you say it is, wherever you happen to be.

I will take this further: You do not need “saison” yeast to make saison. Saison is a tradition on the one hand and a marketing scheme on the other—and there is nothing wrong with either. Saison is not a microorganism. Its DNA is cultural, not chemical. As Senne brewer (and noted saison history buff) Yvan De Baets recently told a gathering at the Craft Brewers Conference in Denver: “Farmers in the middle of the countryside didn’t order their saison yeast from Wyeast.”

A Belgian brewer once blew my mind by telling me that he was using the equivalent of Safale US-05 American ale yeast. He was understandably reluctant to let that information slip out. American yeast doesn’t make Belgian beer, does it? Well, of course it does. If it’s made in Belgium.

Ronald Mengerink’s brewery Dochter van de Korenaar provides an interesting case. It’s in Baarle Hertog, which quirky history made into a Belgian enclave surrounded by Dutch soil. Also, Mengerink is Dutch. His yeast is American, mostly. His beers are Belgian anyway—and not just because of where they are made. His sense of balance, attenuation—yes, he employs a multistep mash—and ample carbonation help to make the case. A dose of eccentricity and packaging with panache don’t hurt either.

My point here is not to argue that brewers should use cleaner yeast to make Belgian beers. Doing so will not help you make a credible abbey beer, for example, which wants a certain subtly spicy fermentation profile. My point is that yeast is only one of many decisions that give a beer its final character, and that brewers should not feel tied to words on a packet. Yeast evolves. Orval’s was probably English in origin.

Furthermore, you can take inspiration from Belgium without making Belgian beer, and even without calling it “Belgian-style.” You can steal a trick or three and call it what it is: American beer, made on American soil. I promise that Belgian brewers are stealing American tricks and combining them with their own. Their beer will still be Belgian.

This international craft beer thing is a wondrous, many-vectored thing. It lets you do pretty much whatever you want within the bounds of making drinkable beer.

Using the best information available—directly from the brewers when possible—here are selected metrics on a few well-known Belgian ales.

Whether or not you have a farmhouse, you can brew these interesting farmhouse ale styles.