In the old days, beer fermented in open vessels, and then in wooden casks. We like to imagine that some old brewer one day made a mistake and accidentally bunged a still-fermenting barrel—and must have been pleasantly surprised when it up served up a spritzy beer. Was that how carbonated beer was born?

Today, most beer is served at a level between 2.5 and 2.75 volumes of carbonation. Anything less runs the risk of being derided as "flat beer." Cask beers on the other hand have less carbonation. Traditionally, air pumped into casks during dispense introduces nitrogen. Nitrogen microbubbles give cask beers their silky smooth texture.

Today, the occasional brewer still bungs the fermentors to build pressure and carbonation "naturally." This is more of a nod to tradition than science, because research suggests that letting pressure build up in your fermentation is detrimental to flavor development. For example, even a small buildup of CO2 pressure can adversely impact the production of flavorful esters during fermentation [1]. The esterification of fusel alcohols are believed to come from the metabolism of wort amino acids (especially branched-chain amino acids) by yeast [2,3,4].

Beers produced in shallow fermentors produce much more fruity-estery beers than tall cylindroconical fermentors. It is well documented that in tall fermentors, hydrostatic head causes CO2 partial pressure (“supersaturation”) to build up at the bottom of the tank inhibiting volatile ester formation [5].

For improved efficiency and better resource utilization, modern fermentation has gravitated toward large (tall) fermenters and higher-gravity worts. They also have largely moved away from applying any back pressure on the fermentations not only to preserve flavor, but also because pressure-rated fermenting vessels are significantly expensive.

Today, most brewers finish fermentation at ambient pressure and carbonate the beer in a separate step in the cold-service or finishing operations.

Carbonation methods typically employ some form of CO2 gas injection into the beer. Commonly, this entails pushing the CO2 gas into a bright beer tank, through "stones"—originally, porous rock like those seen in aquariums. Stones break the gas down into small bubbles that dissolve better than large ones. Most brewers have switched to porous, sintered metal tubes instead of stones, but the moniker stuck.

Brewers soon realized that blowing bubbles into the bottoms of bright beer tanks with stones (pick your kind) is pretty inefficient. Most of the sparged gas ends up in the tank headspace, building excess head pressure, while the carbonation remains underachieved. In general, target carbonation is accomplished by trial and error. Poor gas-transfer efficiency means that bubbles rising up in the tank will also strip beer flavors. The net result could be considerable loss of product flavor, hop/BU utilization, and to a degree, beer foam, not to mention wasted gas.

Typically, gas is introduced into a flowing product stream for “inline carbonation.” All the injection is focused either at a point (“pinpoint” carbonation) in a convergent-divergent nozzle design, or spread out over a larger area by using a porous “candle” element. Specific designs of the sparging element vary in porosity, area, element thickness, and the mass transfer or dissolution efficiency of the bubbles issued from it. Other processes use inline static mixers, where the injected gas is shredded into smaller bubbles by shear and turbulence. Still other designs use venturi jets to entrain gas into the flowing beer stream. Of these technologies, the static mixers and venturi systems produce bubbles over a large size range, while the porous stones tend to produce a narrower distribution of bubble sizes for a given operating condition. As we will discuss shortly, this aspect is important.

The brewer must pay special attention to the sanitary design aspects of a carbonation system. For example, are there threaded connections? Threaded fittings anywhere are inappropriate for product contact. Often the beer "sweats" through the sparger element into the gas side. Microbiological problems can occur unless there is a way to thoroughly clean and sanitize the gas side of the sparging element as well.

Over time, stones can get fouled by beer or particulate matter from the product (yeast, grain, trub, cold break, etc.) or even the gas stream. A gradual loss in mass-transfer efficiency may be expected unless the pore structure and the total available gas-flow area and superficial velocity is appropriately factored into the sparging element design.

One radically different technology that had been introduced at MillerCoors (formerly Miller Brewing Company) is a bubble-free carbonation method using hydrophobic microporous membranes. Here, gas and liquid are brought into an intimate contact without the gas actually breaking through in the form of bubbles. Simple feed-forward control logic allows for exquisite precision in carbonation on the fly, as the beverage is sent directly to a packaging line. Despite the attractiveness, the membranes foul easily, cannot withstand robust cleaning and sanitizing conditions, are expensive to replace. 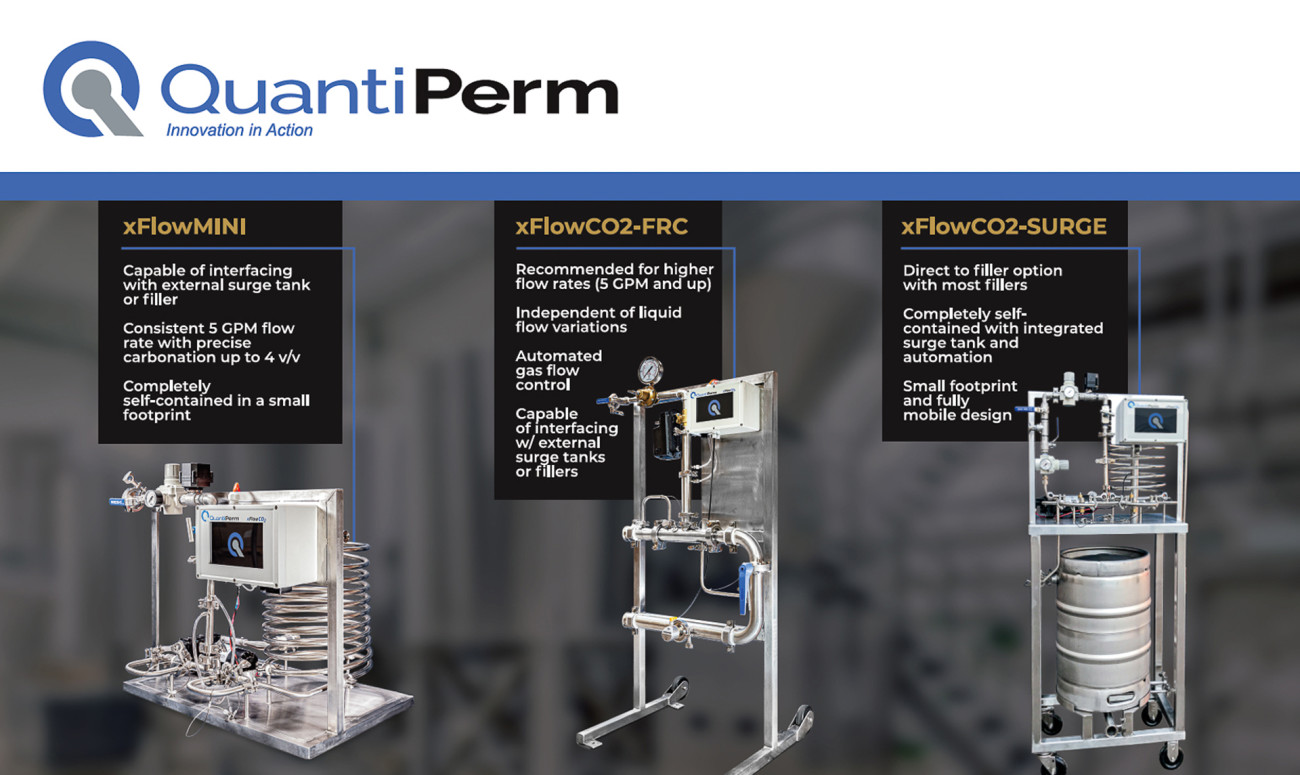 QuantiPerm introduced the xFlow line of robust and economical “cross-flow” carbonation systems in 2006. Although the systems have evolved into various versions to meet specific market segment needs, the basis of the xFlow technology is a carefully prepared, custom-sintered, stainless alloy tube with a very precise pore-size distribution. Controlling the pore-size distribution into a narrow band allows the creation of fine bubbles that are uniform in size.

Size uniformity is important to minimize a process called bubble disproportionation. Disproportionation refers to the process whereby larger gas bubbles grow even larger by "vacuuming out" dissolved gas from the liquid at the expense of small bubbles, because the energetics are thermodynamically favorable. Small bubbles are squished down and forced to dissolve (which itself is desired), but then the presence of larger bubbles leads to essentially a net loss of dissolved gas into the larger bubbles. Larger bubbles rise quickly into the headspace, taking precious flavors with them.

The xFlowFRC system directly ratios-in the gas-injection rate in real time. The operator specifies the carbonation target, which determines the actual injection ratio. While there is virtually no upper limit to the size of these systems, standard units can handle between 5 and 75 gpm of beer flow. These units are very versatile and can be used in a variety of configurations. For example, in the simplest option, beer from the bright tank or unitank can simply recirculate through the xFlow system. The user inputs the total amount of product that needs to be carbonated, and the carbonation bump level desired. They can add any level of carbonation desired, from subliminal levels like 0.01 volumes all the way up to 8 or 10 volumes. The unit runs for several minutes, depending on the liquid flow rate used, and automatically shuts down carbonation and sounds an alarm. 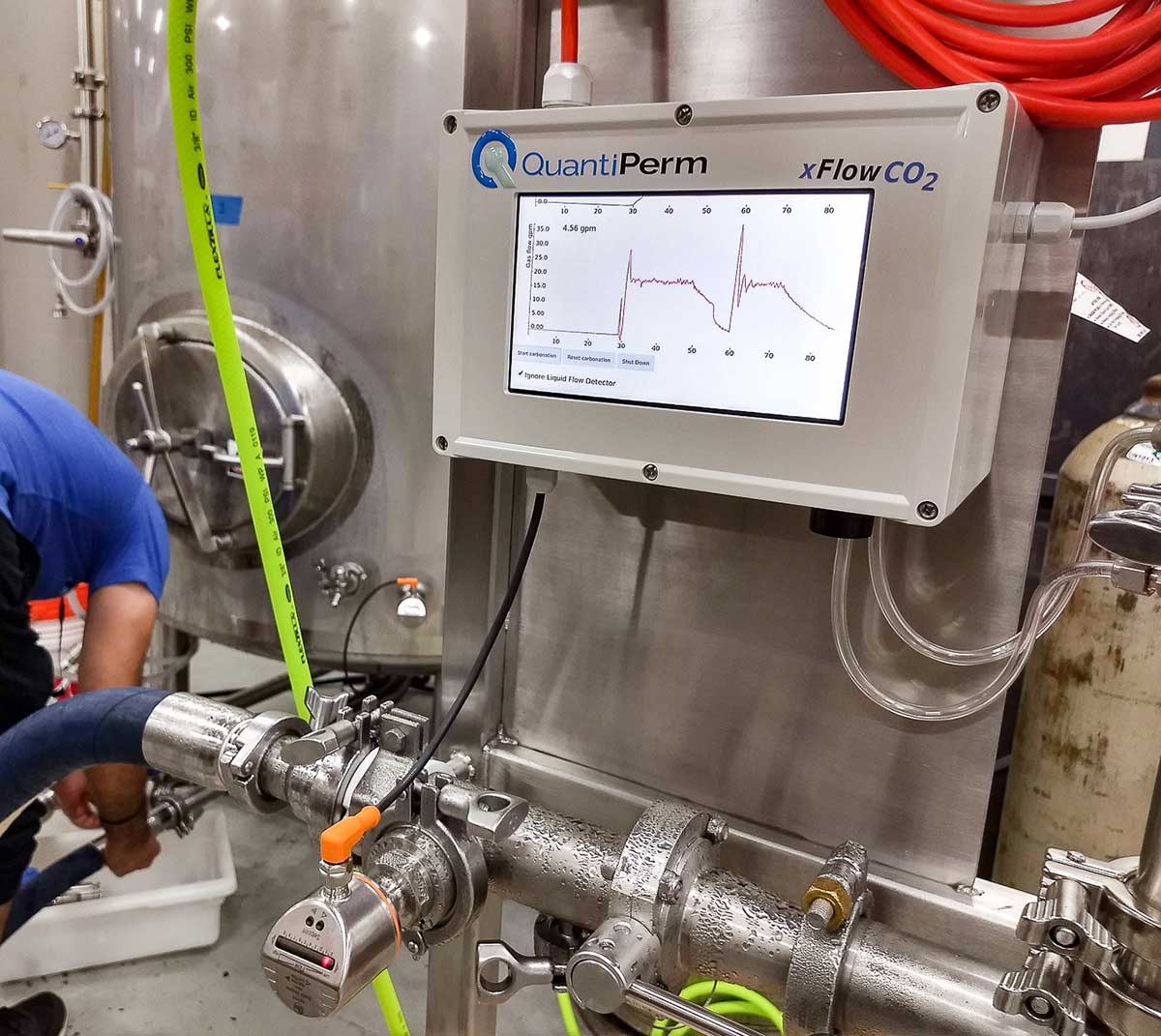 Alternately, the xFlow system can be used as an inline, single-pass carbonation system located anywhere upstream of the receiving bright beer tank. Filtration or clarification can be performed either before or after carbonation. If a centrifugal clarifier is used, the xFlow system automatically detects interruptions in liquid flow whenever the clarifier goes into solids discharge mode. At all other times, it will automatically keep up with the liquid flow rates on a true flow-ratio control algorithm.

The xFlow-Mini is a complete stand-alone carbonation system intended for smaller operations. Generally these models are limited to 5 gpm maximum flow rates. 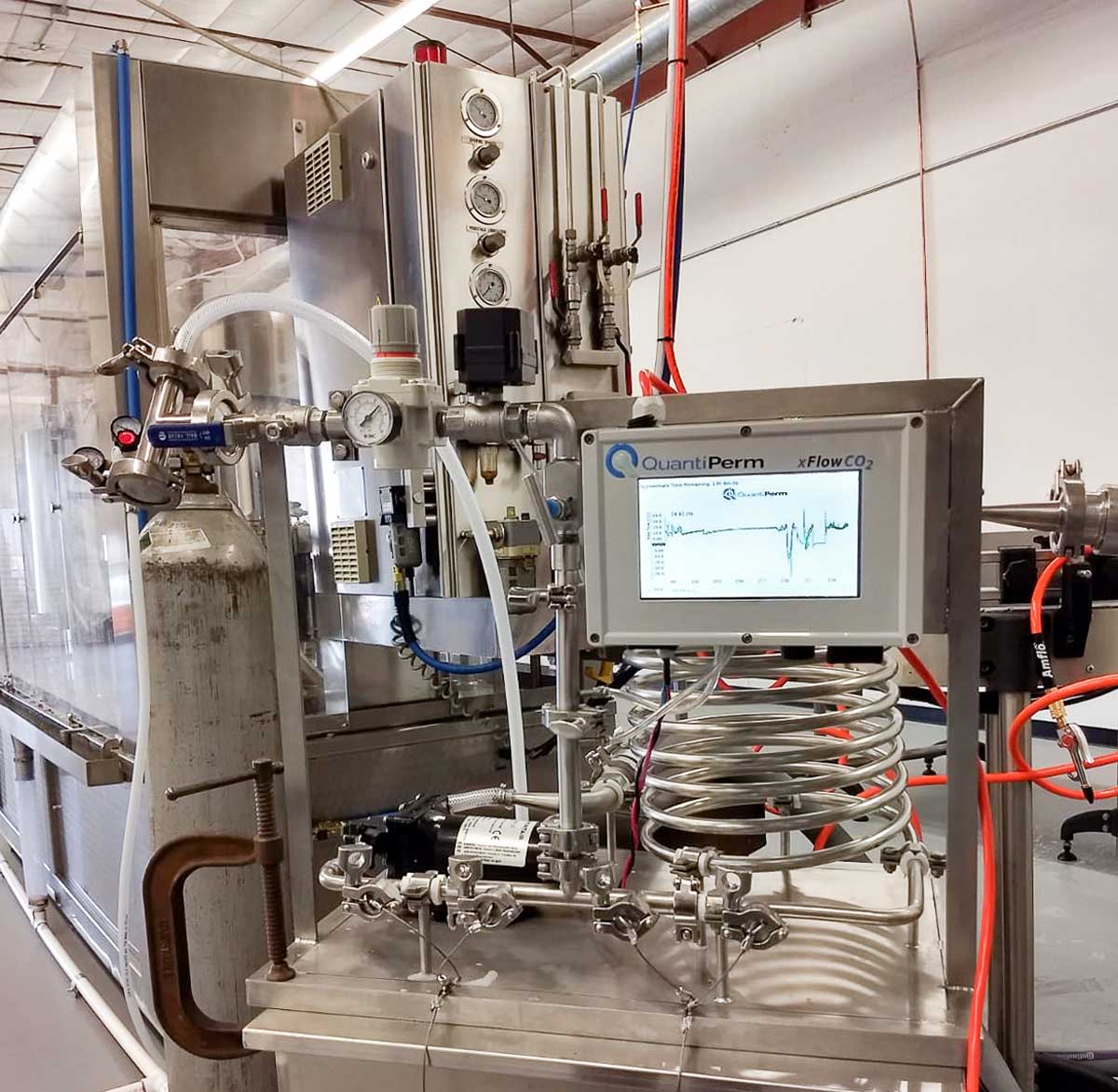 xFlowMini in a craft soda plant.

All the xFlow systems are very versatile in that they can be used in a tank recirculation, single-pass to bright tanks. With recent improvements, it is now possible to economically carbonate and send the product directly to a filler with the xFlow systems. Beyond beer, products such as craft sodas, cocktails and wines that require high carbonation levels can also be carbonated inline and directly packaged with appropriate accessories. By reducing the bright tank space and plant foot print in this manner, significant cost savings can be realized.

Nitro-style beers now represent significant variety in their own right. Just like carbonation, the xFlow technology is readily applicable for nitrogenating products such as beer, coffee, tea and more.

For on-demand, on-premise nitro infusions, our NitroBrew® systems deliver the perfect solution. NitroBrew® infuses nitrogen into the beverage well in excess of 100 ppm—many times greater than commercial nitro beers. Environmental sustainability is our passion; there are no consumables with NitroBrew®. Our consumers avoid the disposable gas cartridges that contribute to the large carbon footprint associated with their manufacture and distribution. This is also a cleaner option, since there are no spent cartridges ending up in the landfill. The dollar savings is just icing on the cake.

Lastly, QuantiPerm’s xFlow technology is also applicable to de-oxygenation—a topic for another time. Suffice to say that dissolved oxygen levels in the liquid can be reduced readily to levels below 10 ppb. QuantiPerm’s technology delivers this level of performance at a fraction of the cost compared to alternatives, such as thermal-vacuum desorption technologies (high energy cost, scaling) or the expensive but fragile membrane technology. 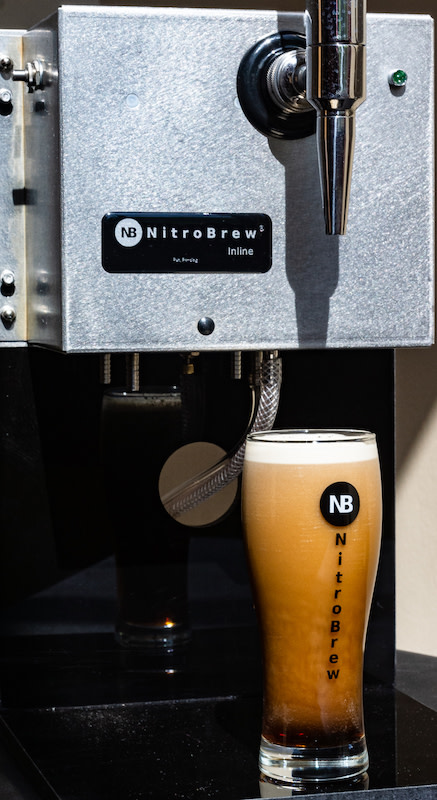