Like the punk-rock pioneers who inspire them, Burning Beard rejects standard operating procedure and embraces a unique set of values that have helped to set them apart from the crowded San Diego beer scene.

The self-described delinquents at Burning Beard Brewing Company have never operated conventionally. Launching on Leap Day 2016, the founders outlined an uncompromising vision from the start: absolute and unapologetic authenticity in every aspect of operations.

“Mike and I developed the Beard ethos by putting down on paper who we are, who we’d like to be, and perhaps most importantly, who we will never be,” says Jeff Wiederkehr, the director of brewery operations and cofounder with Marketing Director Mike Maass.

That ethos, featured prominently on their website, espouses transformation, anarchy, and an appreciation for poetry. It also has helped to make the four-year-old brewery a cult favorite—no small feat in San Diego’s engorged craft-beer scene.

Of course, it helps that their beer tastes great, too.

Sprouting of the Beard

Burning Beard has evolved organically since that Leap Day, helped in part by their strategic and somewhat isolated location in El Cajon—deep into East County, about 17 miles east of downtown San Diego. Despite being home to similarly subversive voices such as Frank Zappa and rock critic Lester Bangs during their teen years, it’s a blue-collar area known for conservative values and for being home to the second-largest population of Chaldean Catholic Iraqis after Detroit, Michigan. What it’s not known for: craft beer.

That’s a boon to the Beard crew; in fact, Wiederkehr describes the gritty surroundings as reminiscent of one of the most famous breweries in the world—Cantillon.

“Cantillon is in the El Cajon of Brussels,” he says with a laugh. “Both share a history of being former farmland, which has given way to graffiti, car pollution, and beer. The only thing we are missing in El Cajon is the generations of brewing tradition, generations of knowledge and skill, amazing techniques, amazing palates, [and] flawless execution.” Still, they’re working on those last bits.

Shannon Lynnette, the brewery’s longtime hospitality manager, explains that the location has “enabled us to be ourselves.” Today, the 15-barrel brewhouse holds seven 30-barrel fermentors and a 30-barrel brite tank, plus a wild-ale cellar, a handful of foeders, and a coolship in a custom-built cedar shed in back of the brewery. 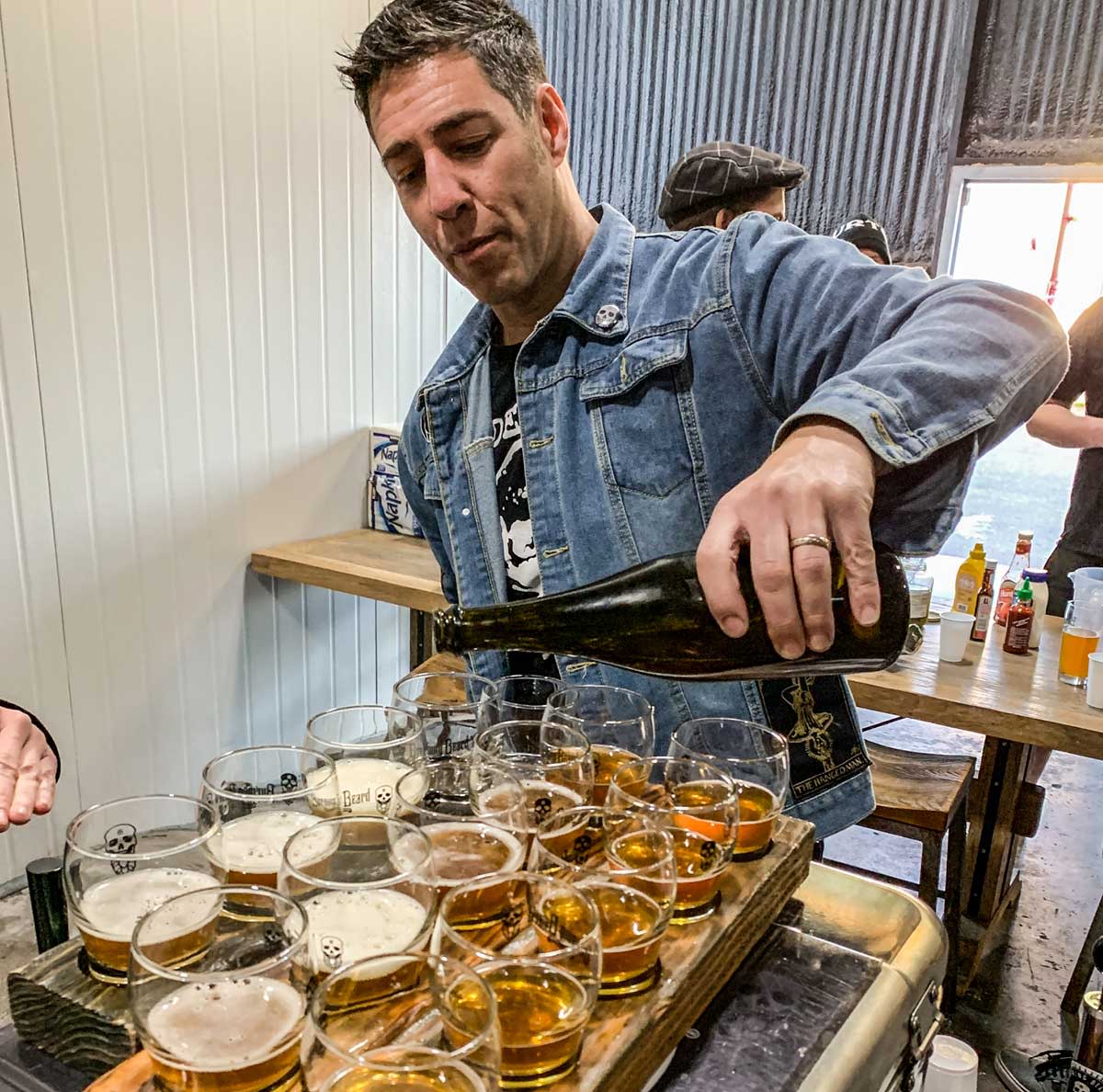 The Range, from Art to Science

Burning Beard churns out a portfolio of styles demanded by San Diegans, heavy on IPAs—such as the solidly West Coast Dankness Visible—and lagers—such as the Czech-influenced Normcore—plus a highly regarded ESB named Banksy.

But in late 2018, the brewing team took their reverence of Cantillon and other lambic brewers to the next level by building their own copper-lined, 15-barrel coolship, flanked by 100 oak barrels ready to develop and incubate those funky flavors. Embracing the unpredictability of spontaneous fermentation “is the ultimate expression of the Beard vision in beer,” Wiederkehr says. He considers it modern-day alchemy, and in his opinion, the brews coming out of it—such as their lambic-style wild ales—reflect the harmony between control and chaos. “It’s tasting like the magic that made it,” he says.

If the coolship beers reflect the art of brewing, Wiederkehr’s attention to classic styles reflects the science. Normcore, their 5.5-percent ABV Czech-style pilsner—winner of U.S. Open Cup silver and voted best lager in San Diego by readers of the local beer magazine West Coaster—uses Belgian Dingemans pilsner malt and 100 percent Czech Saaz hops to achieve that slightly bready, bitter-but-balanced drinkability in a style that leaves no room for error. It’s one of Wiederkehr’s old homebrew recipes, but after four years of fiddling, he says it’s about as dialed in as it will ever be. “Making this beer is like trying to draw a perfect circle,” he says. “It should be so easy, but the only thing easy about the style is seeing when it isn’t perfect … We are really close to never changing it again.”

Other lauded beers include their take on roggenbier, which uses 80 percent rye malt and hefeweizen yeast for a surprisingly balanced yet spicy finish. Few breweries make this old-fashioned style regularly—even in Germany—but Burning Beard has never cared much about what others are doing.

Again and again, Wiederkehr mentions authenticity as the core value that drives operations. “We don’t have a brand; we have each other,” he says. “If you know any one of us—Mike, Shannon, me, or any of our staff—you know who we are, [and] you have a pretty good window into the Beard,” he says. As with their punk-rock inspiration, there is a rough, egalitarian ideal in play—though Wiederkehr concedes they’re not for everyone. “We all just can’t help being who we are.”

The crew is tight-knit, and the founders reward commitment. Last year, Maass and Wiederkehr decided to expand the ownership team by handing Lynnette a stake in the brewery—no strings attached.

“They gifted that to me for blood-and-sweat equity for my three-year anniversary,” she says. “They were like, ‘Here’s how you’re doing: you’re doing great, we love you, here’s a little bit of a raise, oh, and we’re bringing you on the ownership team.’” She re-creates her shocked reaction of that day with sputtering sounds and wide eyes, but to Beard regulars, it was anything but a shock.

“Shannon bleeds creativity, beer education, and authenticity,” Wiederkehr says, calling her arrival at Burning Beard “serendipitous.” If Lynnette’s physical presence is rarely absent from the tasting room, her influence is omnipresent. She’s the driving force behind a beer-education program that permeates every aspect of the tasting-room experience, including charging $2 for tasters rather than unlimited splashes (which, admittedly, isn’t an ironclad rule). Communicating the value of beer as more than just a beverage, Lynette says, instills appreciation and allows drinkers of all experience levels to sip, learn, and enjoy.

The rest of Burning Beard’s roster—the “Ministry of Beer”—includes an unusually high number of women employees. They appear to share a common appreciation of experimentation, honesty … and, yeah, a lot of tattoos. Based on the legendary jukebox there, it probably doesn’t hurt to be a metalhead, either.

Reputation plus far-flung location leads to a wide-ranging mix of Beard patrons. Mechanics and welders from around the corner join hardcore beer fans who’ve made the trek from downtown San Diego.

“I hate splashes,” Lynnette says, with force. “It doesn’t tell anyone anything about the beer to give them a warm, watered-down taste of beer. People want beer education—it’s awesome.”

Rather than building an empire of multiple satellite tasting rooms, Burning Beard has focused its attention on home base, nurturing the existing space to make it the best and most distinctive it can be. “One of the reasons we haven’t opened a second tasting room is we have something unique out there” in El Cajon, Lynnette says. “We’d rather just keep investing in that community, which is why we built a coolship. We would rather make sure there’s a proprietary yeast strain that East County gets to herald as its own, rather than spreading ourselves too thin.”

Based on the solid following and accolades the Beard has collected in its four-year tenure, the strategy appears to be working.