At Seattle’s Floodland Brewing, Adam Paysse pursues a singular vision: to make beers that reflect his preferences and ideals. Turns out, a lot of other people dig them, too.

Let’s get one fact out of the way: Floodland beer is not easy to obtain. The beer’s supply is constrained by how it’s made, how much that process yields, and how high drinkers’ demand is for it. However, while that limited availability is real, it’s far from the most interesting aspect of what’s happening inside the brewery’s facility in the Fremont neighborhood of Seattle.

Instead of fretting over how drinkers can or can’t get Floodland bottles, it’s worth asking what’s made the beer inside them so captivating.

No one fixates on that question more than Floodland founder and brewer Adam Paysse. Formerly a cofounder of Seattle’s Holy Mountain Brewing, Paysse left in 2017 to start his own brewery focused on mixed-culture beers sold via a bottle-club model—there is no taproom; rarely, kegs appear as an exception to the bottled rule. Aiming to make beers that reflected his preferences and his preferences alone, Paysse built Floodland to brew and to “not be full of shit.” Floodland is Paysse, and Paysse is Floodland. So, the question of what makes a Floodland beer is more than semantic. It’s existential.

“If you want to make good beer, then you’ve got to be critical about it, which can be hard to switch off,” he says. “But we are still making the same sorts of beers we were at the beginning four years ago, and still drinking them, so that’s a good sign.”

Paysse says that beers arrive in his imagination fully formed, like characters from a book. He sees the final form, then has to work back through techniques and a recipe to bring this Platonic beer to life. That requires a flexibility of methodology and terminology; Paysse avoids across-the-board proclamations and prefers to describe each beer on its own terms.

His descriptions of beers, then, tend to be lengthy, but that’s in the interest of transparency and accuracy. Because broad terms such as “Brett beers” and “wild yeast” are imprecise and can cause more confusion than clarity, he outlines as much of the brewing process and ingredients as possible.

This may be why Paysse primarily communicates with drinkers via the brewery’s newsletter. It’s a free-form medium, and one that you’re probably only reading if you’re very interested in Floodland’s small corner of the beer world. In a 2020 newsletter, for example, Paysse laid out some of his thoughts on terminology, definitions, and the like, including this disclaimer: “Please don’t read this and regurgitate it as rules. If I see, ‘Well actually, Adam at Floodland said that’s the wrong way to __’ on Facebook, I’m going to shit myself and jump out a window.”

It’s safe to say that Floodland produces primarily saison-inspired beers and that most employ a mixed culture of yeast and bacteria (see “Rearing Mixed Cultures,” page 38). Many incorporate fruit, honey, or flowers, in keeping with the winemaking concept of “field blends” and the farmhouse tradition of using fresh ingredients in a way that preserves them for future enjoyment.

Paysse also says it doesn’t matter how deeply you think about the terminology and process of his beers, as long as you enjoy the expression of what’s in the bottle. And plenty of beer drinkers do.

“Floodland stands on top with any of the big names in mixed fermentation, or saison, or whatever you want to call it,” says Dave Riddile, marketing and operations director for Here Today, a Seattle brewpub planning to open this summer. “Floodland beers are across-the-board world class.”

It’s not just their breadth and expressiveness that are impressive to Riddile, but the freedom they’ve earned Paysse to run his business, his way.

“If the quality of the thing you’re making is at a high level, that buys you more ability to stake out your own path,” he says. “There are other brewers who bend to the will of the consumer or who are chasing hype around poorly made beers, so it’s inspiring to see that there is somebody on that other end of the spectrum. It’s good to know that beer consumers still respond to that and respect that.”

Reverse-engineering his beers from conceived final product to raw materials is what guides Paysse’s brewing process. At the outset, Floodland didn’t make its own wort, instead using the brewhouse at Seattle’s Seapine Brewing and fermenting and blending back at Floodland. In 2019, Floodland installed a custom brewhouse from North Coast Metal Design, set up specifically to brew low-gravity beers.

Floodland’s process is largely hands-on and rather rustic—no glycol, no cold room, no keg washer—and almost all beers touch barrels in some form. Paysse has begun using mostly whole-flower hops, which don’t impart maximum aromatic punch, but which he values for the texture and herbal/grassy character they impart to saisons. Paysse emphasizes that these choices aren’t due to any romantic or virtuous notion of what brewing “should be”—it’s because those methods help create the beers he wants.

“The technical aspects of brewing are all just in service of actualizing the beer you have in mind,” he says. “Technical brewing skills are vital, but they have to be paired with good taste.”

For all his striving, Paysse also yields space for chance. Fresh fruit inspires Floodland in a way that parallels tenets of historic farmhouse brewing: using the ingredients at hand, at a given time, from a given place.

In 2017, Paysse conceived a beer called Marsanne when a winemaking friend of his called with a half-ton of Marsanne grapes in his trailer. In 2018, Johan Vineyards unexpectedly offered Paysse a small amount of Gamay grapes that eventually became part of two Floodland beers. In 2020, when Paysse called Collins Family Orchard with a question about how to work with windfall fruit—fruits that are harvested after they’ve fallen onto the ground due to storms—he was offered a new crop of apriums (a hybrid stone fruit) that eventually became a beer called A Hex Against the World.

“While a bunch of the beers are obsessively plotted out before the wort is made, we also leave room to embrace beers just happening,” Paysse says. “Sometimes that’s just finding a beer in the cellar. Sometimes it’s getting a call that some late-harvest grapes are available. Those beers are the opposite of most anyone’s definition of ‘intentional,’ but they are certainly fun to make and usually fun to drink.” 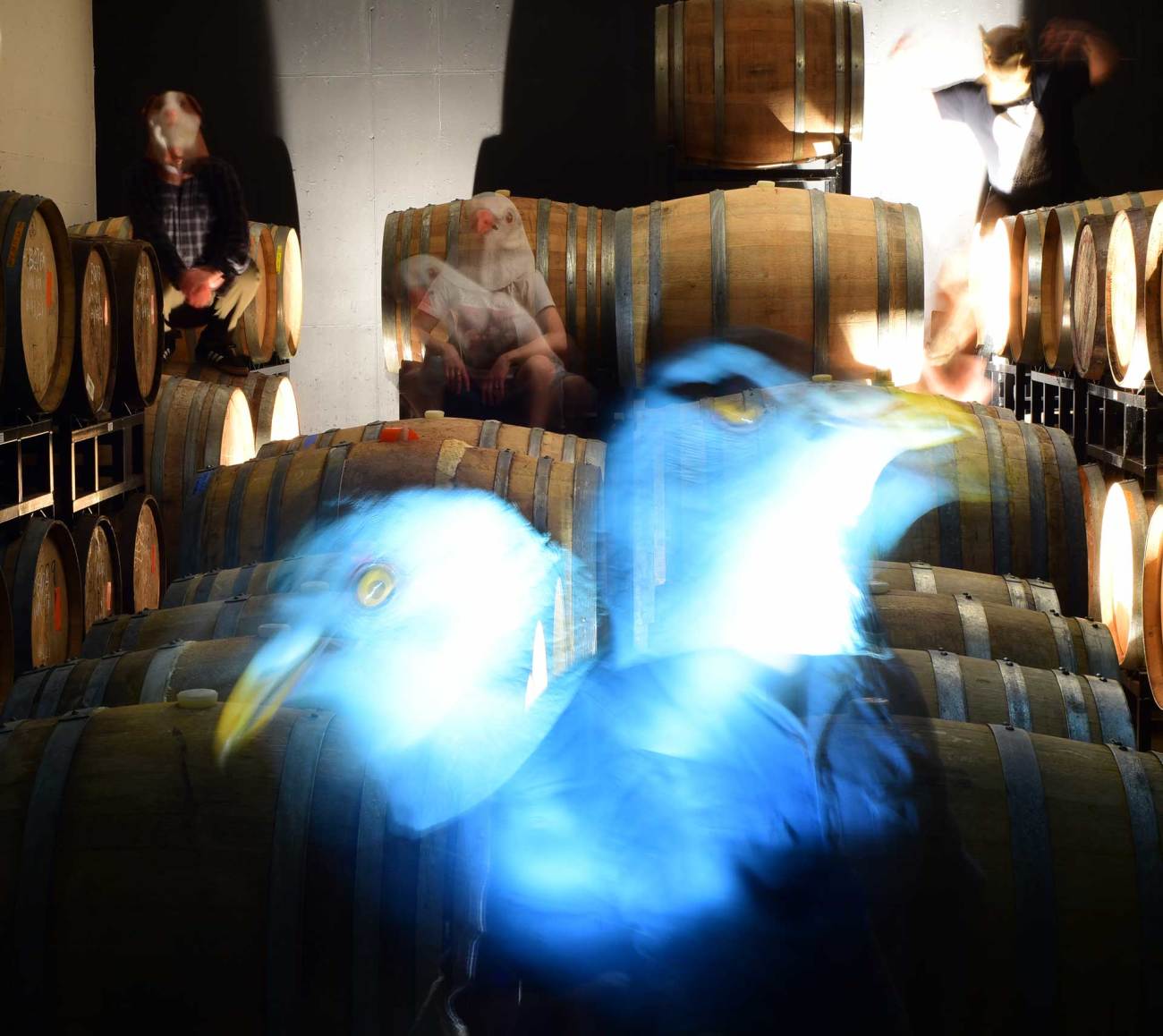 This year will be a time of iteration for Floodland. The brewery plans to re-release some beers it brewed early on, including a yarrow beer called Dwellers by the Waysides, but this time using wort from its own brewhouse. This spring saw the release of a dandelion beer inspired by Brasserie Fantôme’s Pissenlit, “although tasting nothing like it,” according to Paysse. He’s also hoping this summer will see the release of a second version of Death Come Quickly, which involves racking aged beer onto raw honey for about two years, slowly refermenting it without heating the honey beyond hive temperature.

With no tasting room or splashy festival, Floodland has always come off as inwardly focused, in the way that some artists or athletes want solitude to create and train. This is the philosophy Paysse espouses now. He’s arrived at that relative hermitage, though, by accruing technical skill and appreciation for a wider range of beers than he produces today.

“I have found that over the course of my brewing career I’ve had phases of how open I am to outside ideas,” he says. In his early career and as a homebrewer, he read as much about beer as he could and deliberately mimicked styles and specific beers he admired. About four years ago, around the time he was designing Floodland, Paysse needed to turn away from those outside influences.

“There came a point, though, where I started shutting out other beers and new information. I think that finding your own path and your own processes is the only way to end up making beer that has its own character.”

He still drinks and appreciates other breweries’ beers, of course. He repeatedly name-checks Portland, Oregon’s Wayfinder and Seattle’s Machine House as breweries he is grateful for.

“Now, when I drink a great beer … it doesn’t make me want to brew it. It makes me glad that they can brew it so I can drink it,” he says. “A decade ago, it would have been the opposite. But now I just appreciate how good it is, and it doesn’t affect my brewing at all—which is a much better place to be in.”

In this clip from his video course, Jester King’s Jeff Stuffings discusses the wide range of possibilities—pure cultures, bottle dregs, native yeasts, and more—when it comes to choosing yeast and/or bacteria to ferment your farmhouse-inspired beers.