Pulpit Rock Brewing Co. is a story of two brewers who want to work in small batches, find creative paths for new recipes, and be part of a local community rather than ride another brewery’s momentum.

Decorah, Iowa, is a college town in the northeastern corner of the state. It attracts beer travelers from around the country, thanks to the popularity of the state’s largest craft brewery, Toppling Goliath Brewing Company. In that cavernous taproom, fans snap selfies with hazy IPAs and check into apps. Most leave with heaping piles of beer in their car.

But if you want to drink like a local, you make the 7-minute drive to the other brewery in town: Pulpit Rock Brewing Co. To continue the metaphor, this is the David in town and a reminder that great things come in small packages. How small, you wonder? 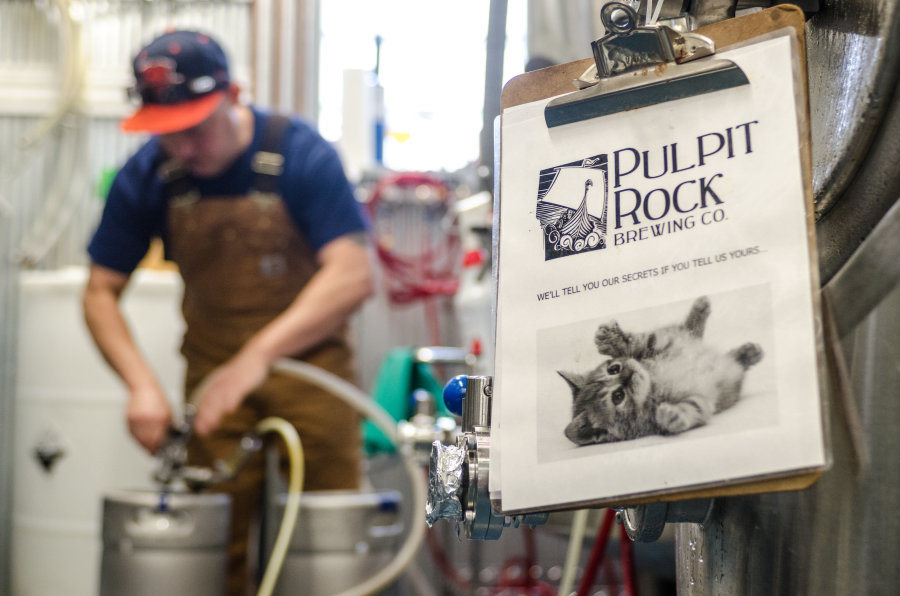 Slack shares brewing duties with Justin Teff, and the two came to Pulpit Rock before it opened its doors in 2015, both having worked for the giant up the road, but both looking to do more than “just make flagships,” says Teff.

“We’re trying to make a name for ourselves,” says Slack. “We both worked there, and it got mundane just making the same beers over and over again, hoppy beer after hoppy beer, and we wanted to do something different. We came to hate the term ‘flagship’—although we do have beers that we make year-round, including an IPA, we do it to appease the people more than ourselves. We want to keep it fresh because in a city of 10,000 people, we have a mix of adventurous drinkers and those just getting into craft.”

Spend time with the brewers, and it becomes clear that they relish their freedom from previous brewing jobs. The brewery’s size and cellar space keep them nimble, and they have a loyal clientele. The taproom just off the brewery, located inside an old dairy facility, is regularly packed elbow-to-elbow before spilling out onto the patio or into a newly acquired space next door that was once a dry cleaners and is now their mixed-culture, wood-aged play space.

Given the quickly rotating draft list, even regular visitors can’t be sure what they’ll see on tap on any given day, but the brewers have quickly earned a level of trust that comes with consistently making quality beers. 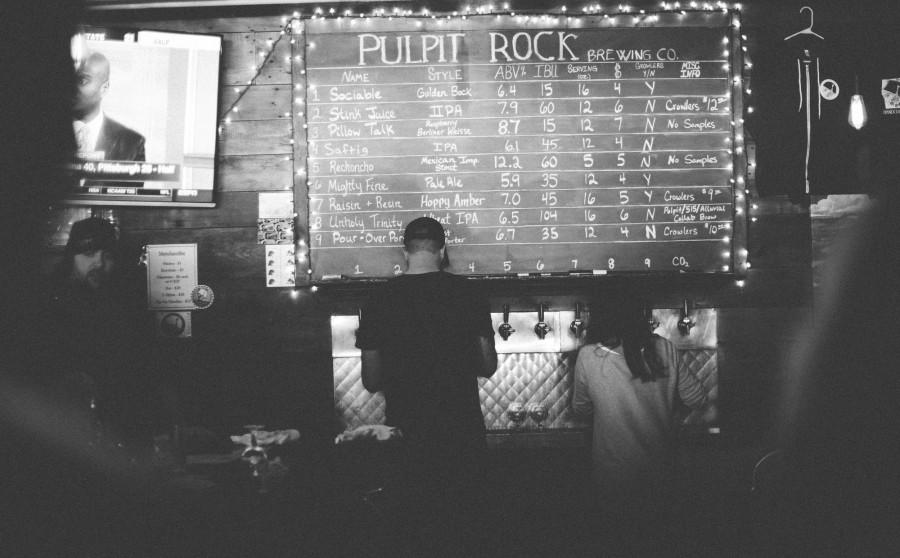 Having two people share the top spot might sound like a tricky situation, but they make it work, often finishing each other’s sentences while talking, and a deep level of trust exists between them.

“We talk a lot about the recipes and the plans, but sometimes we have independent ideas,” says Teff. “And both of us are too bullheaded to veto the other on an idea. With the size of the system, we have freedom together…and by ourselves. How a beer comes together really depends on the beer. Sometimes it’s a collaboration between the two of us from start to finish, sometimes it isn’t.”

At the start, they focused on drinkability and more sessionable beers, such as golden ales and beers in the English tradition. From there, things started to take on a life of their own. And throughout, they haven’t distributed outside of the brewery walls, and although they occasionally do crowler releases, if you want beer to go, you’re best off bringing an empty growler on your visit.

What excites them most are the beers with which they haven’t experimented much yet. That’s why the mixed-culture space has them jazzed. Slack is quick to show off where his modest collection of barrels is aging and to pour samples of beers that are taking on complexity and busting with lively wild-yeast aromas.

The new space is a departure from the taproom, both in the beers and aesthetics. While the taproom has more of a neighborhood, old familiar feel to it, the barrel space is bright and a little more modern, with clean lines and a wall to showcase the barrels as stars. They say the space takes a page from Casey Brewing and Blending (Glenwood Springs, Colorado), where the room in which the beer matures is an extension of the liquid itself.
“We’re really looking to other folks for guidance because many of them, like us, started from nothing,” says Slack. “We’re learning from the beer as much as we can but are quickly learning that blending is an art form.” 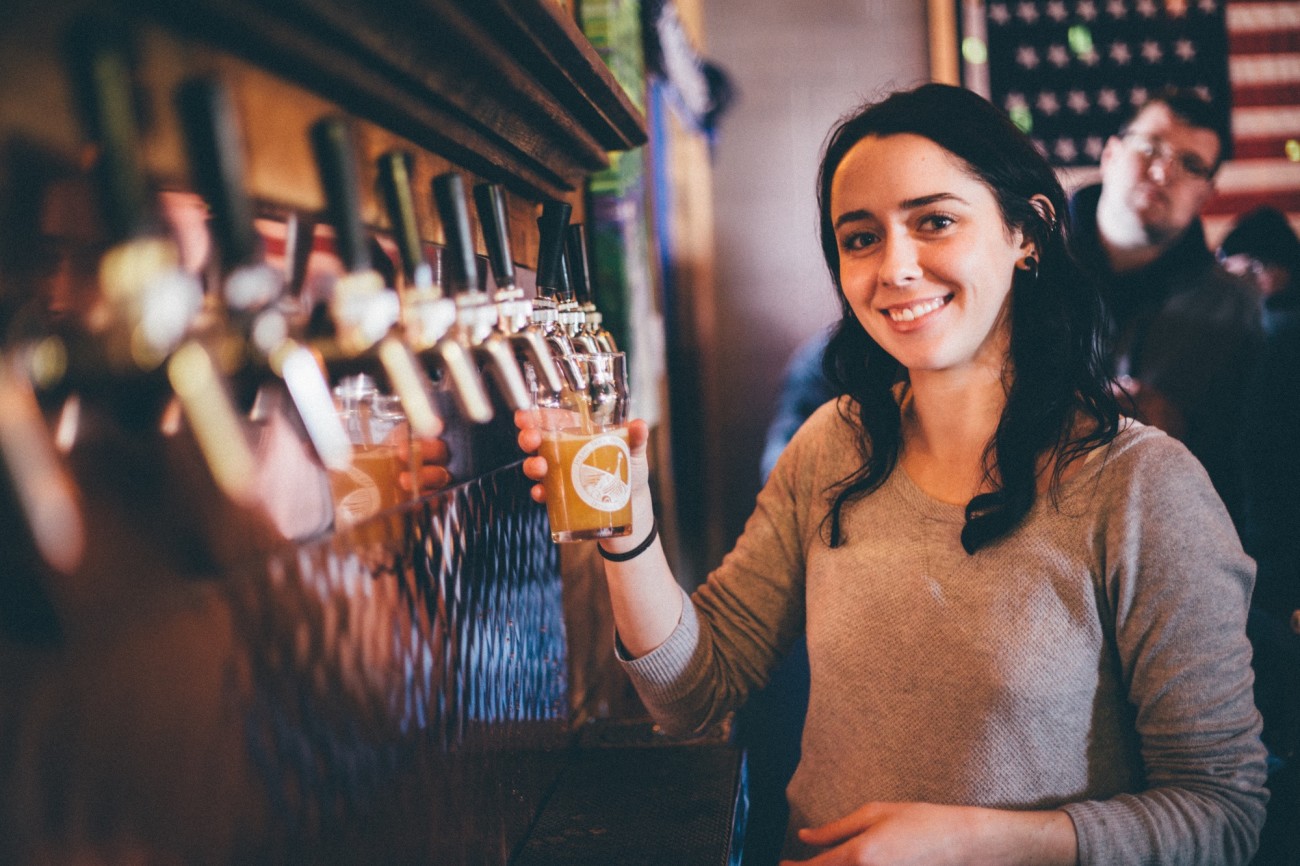 In learning as they go, they are also bringing friends along for the ride. A collaboration done last year with Forager Brewery in Rochester, Minnesota, has them most excited. For that beer, Forager brought their mobile coolship to Decorah for a brew day. They did back-to-back turbid mashes, and half of the wort stayed at the brewery and the other half went to Minnesota. They are hoping to one day do a blend of both.

Slack and Teff are also learning more about the judicious use of lactose. “We use it in appropriate beers, such as stouts, high-gravity porters, and pastry beers, but occasionally we’ll put it in an IPA, even lagers. We use it a fair amount, maybe more than most breweries,” says Slack. “We just like what it brings to beer.” Ask them to explain their brewing approach, and they’ll say, “Contemporary American Beers.”

Ask them to go further with a definition, and you’ll get a chuckle.

“We’re not even sure what it means,” says Teff. Slack admits that they are doing the beers mostly because they want to do them.

“It’s ticking all the boxes that beer geeks want,” he says. “Clean lagers, juicy IPAs, baller stouts, and some kind of aged mixed-culture beers—it’s what drinkers want, not something formulaic.”

To that point, Teff mentions that he’s recently been experimenting with “pastry sours.” Essentially, it’s a kettle sour to which lactose is added, followed by a whole host of crazy ingredients, such as orange zest and white cake or Teddy Grahams.

And when it comes to fruit-infused, they are proponents of whole fruit, although they have used purees from Oregon in the past. But part of the fun, they say, is the challenge of processing the fruit themselves, preparing it in a certain way and getting to know the ingredients intimately.

So whether it is peeling 300 pounds of bananas and tossing them into a batch with some strawberries, tearing peaches apart by hand for another beer, or using $2,000 worth of coconut for yet another, they are learning as they go, hoping for stellar results, but also allowing for the fact that not everything will be great.

“It goes back to our mentality and not wanting to produce the same things over and over again,” says Teff. “We’re comfortable in our own skin, and while it might have been rougher starting out, as it stands right now, we can take the risks that we want. If it’s not good, we’re not going to release it. We have that ability because we don’t have an investment team hanging over our heads.”

This Galaxy and Mosaic hazy IPA is a favorite of Outer Range Brewing fans.