Houston’s SpindleTap is known locally for hazy IPA, but it’s no one-trick pony—as evidenced by the imperial stout that became one of Craft Beer & Brewing Magazine’s Best 20 Beers in 2021—and the brewery is increasingly exploring other styles and beverages.

As recently as 2016, you couldn’t find a hazy IPA in Houston. Fans of the soft and juicy had to resort to beer trading or long-distance travel to get their fix. Given that the fourth-largest city in the United States was in the middle of a brewery boom—almost 30 breweries had opened in the previous five years—you’d be forgiven for assuming that at least one of them was leaning into the style that was starting to take the beer world by storm.

Yet, you’d be wrong. Sure, Lone Pint had its Mosaic-heavy Yellow Rose IPA, and Saint Arnold was selling its tropically hopped Art Car IPA—but for a lush, pillowy ode to citrus groves and mango orchards, there wasn’t anything on the market.

SpindleTap cofounder Brody Chapman says there was a void. He saw opportunity in some open square footage beneath the roof of his other business, Lightning Logistics, in the neighborhood called Homestead. A 2013 law allowing brewpubs to sell beer to-go also was encouraging.

So, Chapman hatched a plan with his partners, scribbled up the proverbial napkin-sketch logo, and began building out a brewery inside a logistics warehouse for the oil and gas industry.

“Part of anything in life is a little bit of luck,” Chapman says. “The fuel was Houston Haze.” 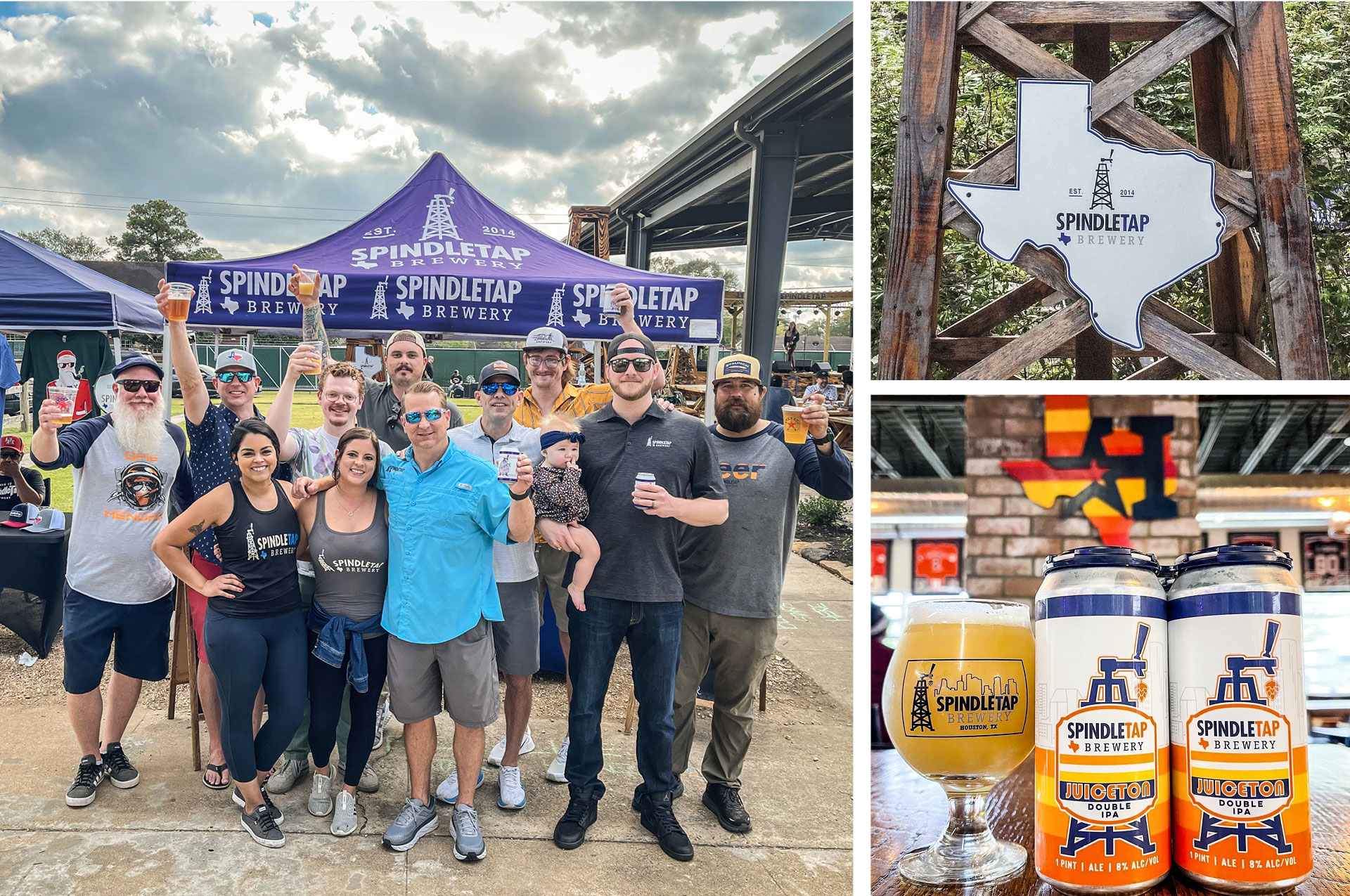 Houston Haze IPA proved to be a turning point for the city as well as the company. After brewing a single one-barrel pilot batch, cofounder and brewmaster Garrison Mathis was happy enough with the recipe to brew and can 20 barrels. Double dry-hopped with Citra and Galaxy, the beer quickly earned a loyal fan base when it appeared in March 2017. Chapman says the first canning run sold out in 45 minutes—a pace he’d never before witnessed. Naturally, they made plans to brew it again the following week. A third batch found its way into cans that June.

Its popularity convinced them to scale up production of Houston Haze for wider distribution. By that time, there were a handful of other area breweries making hazy IPA, but they were focused on taproom sales. SpindleTap took a chance on going bigger, and it worked. Today, Hop Gusher, Houston Haze, and Heavy Hands Double IPA make up about half of SpindleTap’s production.

Steve Labac, owner of the popular Craft Beer Cellar shop in downtown Houston, says they stocked SpindleTap beers from the first day they opened, “but when they really took off is when they released Houston Haze in cans. It was the first consistent hazy IPA in the Houston market to be readily available.”

Consistency and availability are fundamental for Mathis, who studied microbiology at Texas A&M. He also places tremendous importance on paying attention to details, noting that small adjustments can have big results. When it comes to hazy beers, he keeps the malt bill fairly simple to allow the hops to shine: just two-row, dextrin malt, and flaked oats. His goal is to squeeze as much fruit and juice character as he can out of the hop varieties. Approaching recipe design with a scientist’s mentality, Mathis tweaks batch after batch until each beer is dialed in. He’s experimented with shorter boil times, for example; with some of SpindleTap’s IPAs, he boils for only 10 minutes.

“Early on, we were over-hopping,” Mathis says. “It was eight pounds per barrel or nothing. Ultimately, we backed that down to have good, if not better, results. We use both T-90 and Cryo Hops pellets and dry hop during active fermentation.”

With Houston Haze lighting the way, the brewery sharpened its focus. SpindleTap dropped most of its early releases and went on a run of IPAs and double IPAs, starting with Juiceton. Brewed with heavy additions of Citra, Mosaic, Simcoe, and Columbus, it’s widely considered Houston’s first hazy double IPA. Five years on, their bright can designs and beers, which often name-check Houston hip-hop—Draped Up, Diamonds in My Mouth, Chunk Up the Juice—or sports—Hopkeem, Bull Rush, High Knees—continue to resonate locally and beyond.

“A lot of people buy the beer because it sort of hits home for them,” says marketing manager Elizabeth Valentine. “Our brand awareness is definitely increasing.”

Beyond beer, a big part of SpindleTap’s appeal is its physical space: 20,000 square feet divided between a sizable taproom and the production floor, plus another 3.5 acres outdoors. Announced in the fall of 2020 and dubbed SpindlePark, the open-air sports-and-entertainment complex includes a nine-hole miniature golf course, a Wiffle ball field, basketball court, volleyball court, picnic areas, and more. SpindlePark has helped to cement the brewery’s reputation as a family-friendly gathering place.

With a family of his own, Chapman may have found inspiration close to home for “Brody’s World,” the name the team has given the outdoor space. But his entrepreneurial side recognized that a memorable taproom experience was crucial to standing out in an increasingly crowded brewery landscape. “We’re constantly introducing people to our brand,” he says. “And we’ve built a loyal, sticky customer base just through our taproom. For people [who] come in for the first time, their jaw drops.” He says the location 15 minutes from George Bush Intercontinental Airport also hasn’t hurt. “It’s kind of ‘If you build it, they will come,’ and I want people to create great memories here. That’s part of my passion.”

SpindleTap’s community ties go beyond a good-natured game of corn hole or a friendly conversation over the bar, Valentine says. The brewery regularly hosts pop-up markets for local artists and craftspeople, and it partners with different charities monthly. Recent beneficiaries of the brewery’s fundraising efforts include Sunshine Kids, an organization that provides fun activities and emotional support for children with cancer, and Boots for Troops, a nonprofit that sends custom care packages to active members of the armed services. 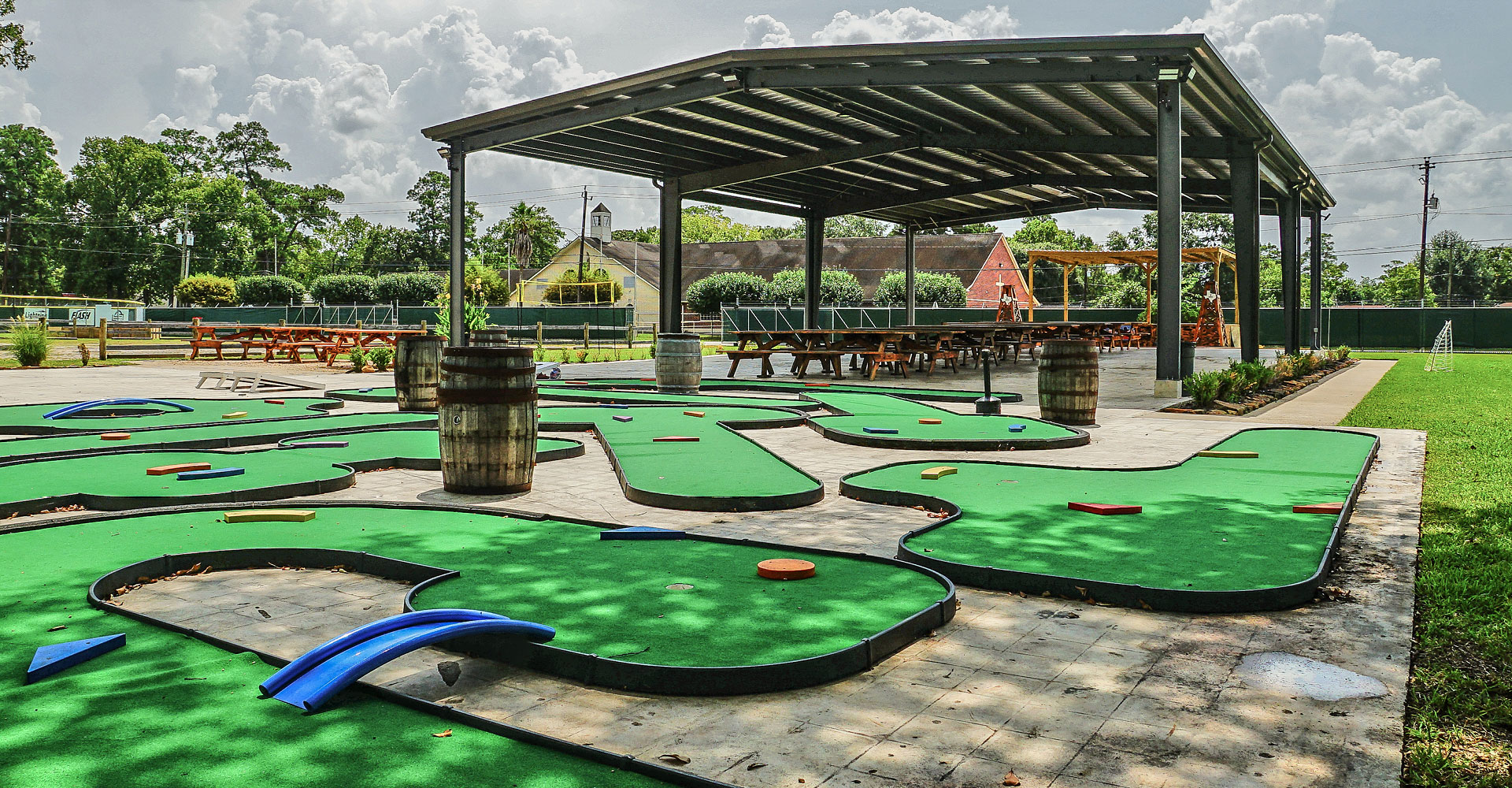 As much as the brewery has won local acclaim for its IPAs, SpindleTap has its sights set beyond hops and beyond the Texas border. Lately, a Vienna lager and a Czech pilsner regularly appear on the taproom menu, not to mention the Aceite Crudo imperial stout that Craft Beer & Brewing Magazine® named one of its Best 20 Beers in 2021. In November, the brewery also launched the Tessellations series of kettle-soured fruit beers, with flavors such as cranberry-blood orange and peach-apricot.

Beyond beer, the company in 2019 acquired a small local coffee company and rebranded it under the SpindleTap name, adding roasting to its operations. More recently, in June 2021, SpindleTap introduced a lemon-lime hard seltzer. “We were known as the IPA kings,” Chapman says. “Garrison was getting sick of hearing it. We want to be more of a beverage company. We might even start canning cold brew.”

Mathis, who worked with head roaster Matthew McKenzie on a coffee variation of Aceite Crudo called Black Gold, is particularly interested in expanding the barrel cellar. He gets excited about the mixed-culture beers that are in the pipeline. To facilitate the development of this program, he and Chapman established a “Funk Shack” on the property that’s isolated from the clean-beer production space. They also hired Jeremy Moore, previously head brewer at Texas Leaguer, to serve as R&D brewer.

“We love mixed-culture fermentations, so naturally it’s something we want to try our hand at,” Mathis says. “When [Jeremy] applied, he brought me a mixed-culture sour. He’s still the only person that ever brought me beer to an interview.” Mathis also praises production manager Amy Condren, calling her the team’s quarterback. ‘I couldn’t do it without her.”

In 2021, SpindleTap brewed about 5,600 barrels despite the pandemic, and looks set to grow further. Chapman says their flagship beers are now available in all major Texas markets along with Louisiana and parts of Georgia. He’s even sent small quantities of beer to Mexico and the United Kingdom. SpindleTap Coffee has exploded, too. Chapman is especially proud that the business donates 50 percent of its proceeds to nonprofit partners statewide.

While he hopes the brewery ultimately gains national recognition, he sees plenty of opportunity in his own, Texas-sized backyard.

“We’re kind of doing a slow, methodical march,” he says. “We like to drill deep, and we’re trying to target good brand placements. We’d rather drill 15 to 20 wells than drill all over.”

Author of The Great Northeast Brewery Tour, contributor to The Oxford Companion to Beer, and former editor of BeerAdvocate, Ben Keene is a beer judge and speaker at industry events. He lives in Seattle, where he is marketing coordinator for Reuben’s Brews.

Amid the ups and downs and gradual, stutter-step return to social life, we experienced some transcendent beers—beers that shone, beers that enlightened, beers that made us stop and remember what it’s all about. Here are the pinnacles of the craft.