From outside the box to the top of the beer ratings, Arizona’s Superstition Meadery has gained a devoted following for its characterful, off-the-wall concoctions.

Listen to this story

When Jeff Herbert and his wife, Jen, founded Superstition Meadery in 2012, he’d tasted more of his own homebrewed mead than he had commercial mead. It now seems like a reckless move—imagine opening a brewery having tasted only your own homebrew and a couple bottles of Stella Artois—but it more than worked for this meadery in Prescott, Arizona. That’s a testament to both the infancy of the American mead market just 10 years ago and to Jeff’s skill as a meadmaker. As Superstition’s reputation grew, so did the country’s thirst for mead.

Superstition’s trajectory paralleled (and owes a debt to) the nation’s craft-beer boom, but it’s also a straightforward small-business story. It began with a maxed-out personal credit card and a lease on 18 square feet of space on a winery’s property—yes, that’s 18, not a typo. Just seven years later, the Herberts were named national Small Business Persons of the Year by the U.S. Small Business Administration. In its announcement, the SBA noted that the Herberts “successfully grew their business, increasing their revenue by more than 160 percent between 2015 and 2017, expanded their staff from nine to 20 employees, and extended their reach into international markets. Jennifer and Jeff truly represent the best of our nation’s small businesses.”

Jeff Herbert credits that success to the very criticism he most often hears about mead: “We took our biggest challenges—mead is really expensive to make and sell, and no one knows what it is—and turned those into our biggest assets.”

A country of drinkers largely unfamiliar with honey wine proved just right for the type of meads and ciders that Superstition makes. Creative blends of culinary-inspired ingredients such as chocolate, peanut butter, maple syrup, coffee, almonds, raspberry, vanilla, and mango were catnip to a growing base of craft-beer drinkers eager for the next unexpected flavor mash-up. The meads’ premium price—$25 or more for a 375 ml bottle—signaled exclusivity and quality. And, like fruit beers and pastry stouts, Superstition’s meads also delivered nostalgic and familiar flavors. That’s crucial when you’re brewing a beverage most people have never heard of, let alone tasted before. 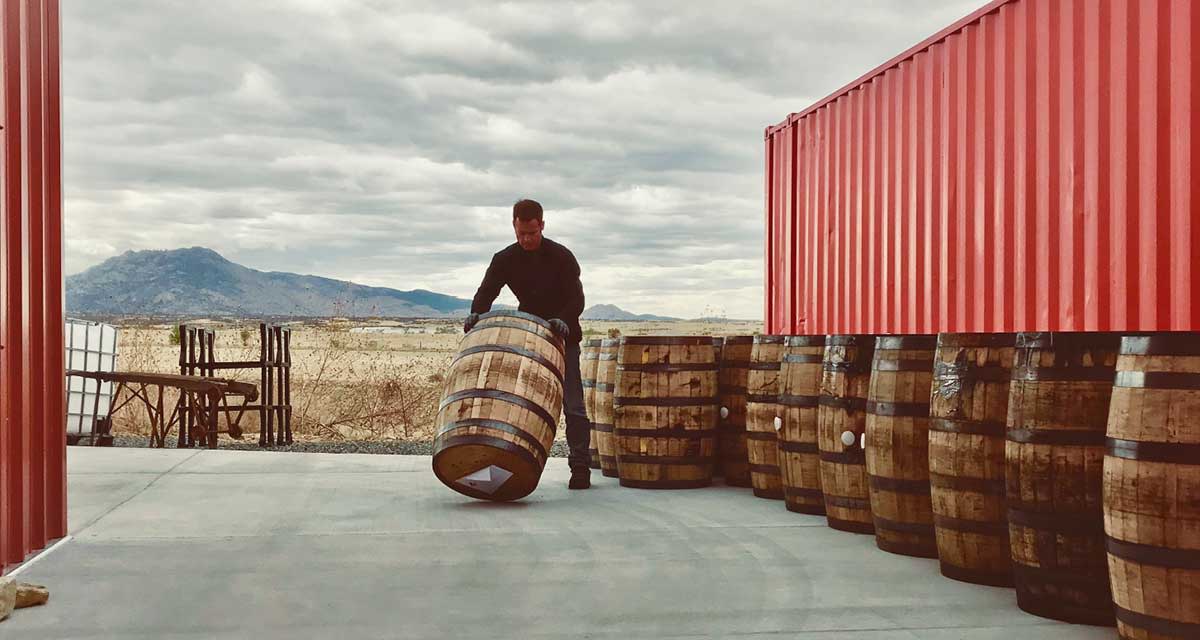 “We were inspired by the beers we loved, the cocktails we loved, the food we loved from all over the world,” Herbert says. “As soon as you can give the brand-new consumer a point of reference and help them taste what they’re tasting, they start to see where you’re going.”

He recalls an early favorite, a maple-syrup mead he brewed to echo recognizable fall flavors and accompany his family’s Thanksgiving dinner. The original meads Herbert produced turned out to be enduring favorites; three out of five of Superstition’s core brands were recipes he brewed within the company’s first few months. He wanted to combat the sentiment that honey wine is esoteric and intimidating. A peanut-butter-and-jelly mead is certainly less so.

Bold flavors aren’t there to distract from less-than-perfection base mead, though. Herbert is relentless in his pursuit of what he calls “stress-free fermentation”: providing his wine and ale yeasts the ideal conditions to produce delicious mead free of off-flavors. Superstition dials in not just fermentation temperature but also pH, nutrient additions, and oxygen levels, striving to keep the pH above 3.5 where yeast are happiest. He also adds yeast nutrient and food-grade oxygen during the first half of fermentation; the former is easily available at homebrew stores, while the latter can be rigged together with a tank, some tubing, a regulator, and an aquarium diffusion stone.

“With mead, a piece of the lore is: You’re going to make this thing, and it’s going to have a lot of alcohol and probably some off-flavors, and it’ll be months to a year before you actually like it. But if you can create an environment where the yeast is at its ideal pH, you realize you can create your mead without off-flavors right from the beginning,” Herbert says.

Though he’s constantly perfecting his products, Herbert is far from a cut-throat competitor. He believes a rising tide lifts all ships within the mead industry—not that there have historically been many others. He and Jen were just the second and third members of the American Mead Makers Association, lending their voices to legislation and media appearances that would benefit the industry as a whole. Throughout the past decade, Superstition both contributed to and benefited from a growing American awareness of mead.

At the same time, the meadery’s rise tracked with a craft-beer industry exploding in the number of breweries and their variety. Beer-rating websites and forums were a boon to Superstition’s business, and the attention was entirely organic.

“I didn’t even know what RateBeer was when someone told me we had one of the top-rated beverages in the world,” Herbert says.

It was 2013, and Superstition had just won gold at the Mazer Cup—mead’s analogue to the Great American Beer Festival—for its now-super-popular dessert mead with white chocolate and raspberries, called Berry White. A friend of a friend subsequently asked Herbert for a bottle of it; that man would turn out to be a highly influential RateBeer user.

Word spread online and at bottle shares. Chance meetings and friends of friends continued to prove fateful. At a release-day party for Presidential Stout at the Arizona Wilderness brewery in Gilbert, Herbert poured some of his mead for a visiting Danish brewer. That brewer was Mikkeller’s Mikkel Borg Bjergsø, and he liked the mead so much he invited Superstition to the Copenhagen Beer Celebration (now called the Mikkeller Beer Celebration Copenhagen). There, a skeptical crowd eventually turned on to the mead Superstition was pouring. Herbert found his pocket stuffed with business cards from international brewers, importers, and bar owners. As of this year, Superstition mead is sold in 36 countries, accounting for 5 percent of the meadery’s overall business. Berry White release-day events take place in more than 44 different locations across four continents. 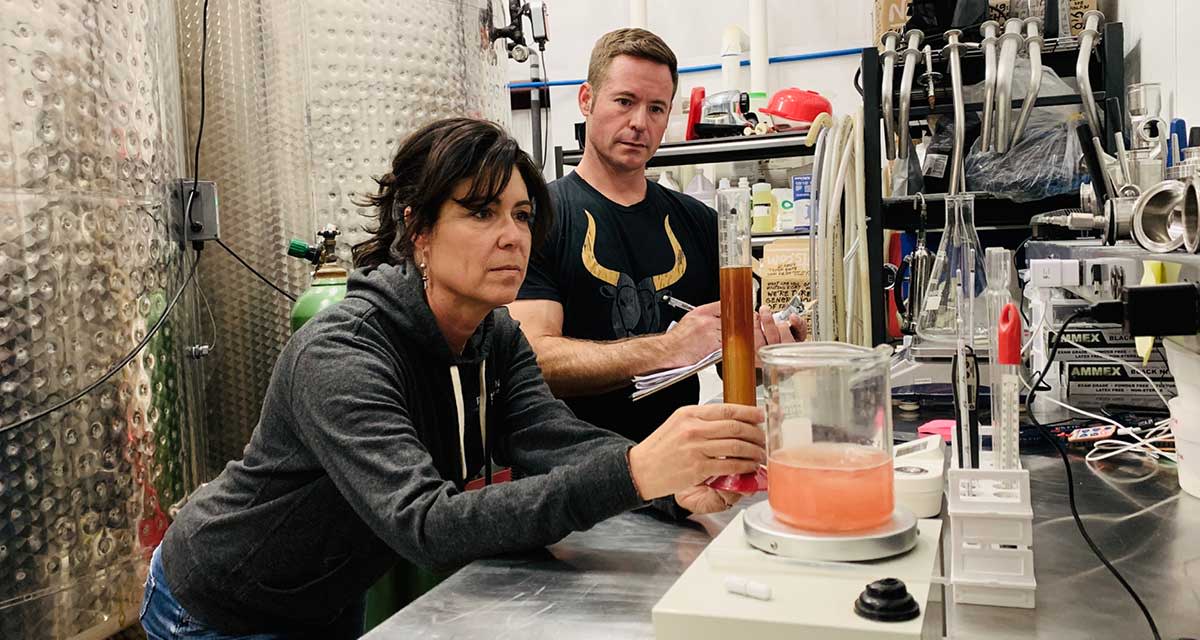 “There are so many ancillary benefits to collaboration, including the organic digital marketing you get from going and telling your story to like-minded people,” Herbert says. “That’s important when you’re talking about any small business growth because we don’t have millions in advertising budgets.”

Though the business has grown at an impressive clip through the years, Herbert jokes that he doesn’t have a whole lot to show for it—besides the business. He and Jen remain Superstition’s sole owners, reinvesting revenue back into projects such as a production facility in Prescott that opened in 2017 and most recently, a coming-soon downtown Phoenix restaurant that will be the country’s first to specialize in mead, cider, and food pairing.

The restaurant is crucial to Superstition’s mission to get as many people as possible curious about mead. Pricing and packaging are another tool for achieving that goal; Superstition has introduced smaller bottles as well as multipacks and individual cans of cider and mead to appeal to customers at different price points. While hardcore mead geeks won’t balk at spending $85 for one of Superstition’s most-coveted bottles, new customers might be more comfortable with a $4 can of cider.

Even the COVID-19 pandemic provided a chance for adaptation. In response to the outbreak and subsequent closures of bars and restaurants, Superstition launched local delivery and a subscription-style bottle club. A local Costco then put in a 20-pallet order to restock its supplies of Blueberry Spaceship Box cider as the store saw an increase in shoppers stocking up. Diversifying and fast-tracking new ways of reaching customers are helping Superstition weather the storm and will hopefully continue to pay off in the long term (37 people signed up for the mead subscription on its first day).

Herbet says evolution, both in terms of flavors and strategies for reaching customers, is what will continue to keep his meadery relevant into the future. He cites the success of Backseat Bingo, the first in Superstition’s line of canned, milkshake IPA–inspired meads that retail for about $5 each, when it launched in January. The mead, reminiscent of Orange Julius, sold faster than any product Superstition had ever released.

Maybe you’ve eyed the mead section of the homebrew shop with curiosity or flat-out suspicion. Could you become a meadmaker? Turns out, you already are; you just don’t know it yet. All you need are the ingredients and these crucial tips from Josh Weikert.