From making the most of the harvest to a long-simmering pot on the stove, Justin Wright and Justin Kruger, a.k.a. “Two Fat Justins,” have created recipes to make your autumn a little more vibrant.

Marinate ribs overnight in one bottle's worth of beer with thyme, bay leaf, and two garlic cloves, covered in a large bowl or pot.

Remove ribs from marinade, pour marinade into a saucepan, and reduce marinade to ½ cup over medium heat. Set aside.

Dry ribs and season them liberally with salt and pepper.

Sear ribs in a Dutch oven over medium-high heat, being careful not to burn the ribs or scorch the pan. When ribs are browned on both sides, remove them. Cook them in batches to avoid overcrowding in the pan, usually two or three batches total.

Once all ribs are seared, add chopped mirepoix to the pan with the olive oil. Brown vegetables until dark golden brown. Using medium heat, this should take about ten minutes.

Add the other two bottles of Westmalle Dubbel to the pan and scrape the bottom with a wooden spoon to de-glaze. Once beer is simmering, add the reserved marinade and beef stock and bring back to a simmer.

Add the short ribs to the Dutch oven, cover with lid, and place into a 300°F (149°C) oven for four to six hours. You can also put this mixture into a slow cooker and cook on low for the same amount of time.

Once the ribs are tender, remove them from the liquid and allow to cool on a plate or serving platter to collect all the juices that release.

At this point you have two options for the sauce: (1) Puree the whole pot with a food processor or immersion blender and make an excellent gravy, or (2) remove the vegetables by straining in colander and reduce the braising liquid by half to create a sticky glaze.

Beer Sensory Notes: The best beer for this recipe is a classic Belgian dubbel, such as Westmalle Dubbel, Rochefort 6, St. Bernardus Prior 8, Ommegang Abbey, or Chimay Red. All of those will display similar characteristics of a beautiful, large tan head and a brown to reddish color with full effervescence. You’ll smell notes of caramel, toffee, and maybe a touch of banana or chocolate. The taste will be rich and full of caramel and dark fruits, as if this beer were made for dessert or a very rich dish such as braised short ribs. There will be minimal to medium hops notes, usually just for balance, and the hops won’t overpower the beer. The finish should be quick and dry, with a touch of lingering sweetness that isn’t cloying. To enjoy, pour gently into a tulip glass with about 1” of head.

What the Beer Does for the Dish: Most braised short-rib dishes rely on a stock to make the braising liquid. Using beer in this particular dish adds a level of richness to the already rich short ribs. Instead of tasting significant umami (rich steak/beef) flavors alone, you’ll get a bit more sweetness from the dark fruit and caramel notes that will complement the ribs. The high levels of carbonation and mild hops bitterness will provide a contrast to the rich, fatty short ribs, which helps clear the palate just a bit for the next bite. If the braising liquid is made into a gravy, it will be a bit darker and more robust than just with stock, and if made into a sauce, it will be richer and have more depth of flavor than just stock alone. You’ll get just a touch of dark-fruit flavor either way you choose. 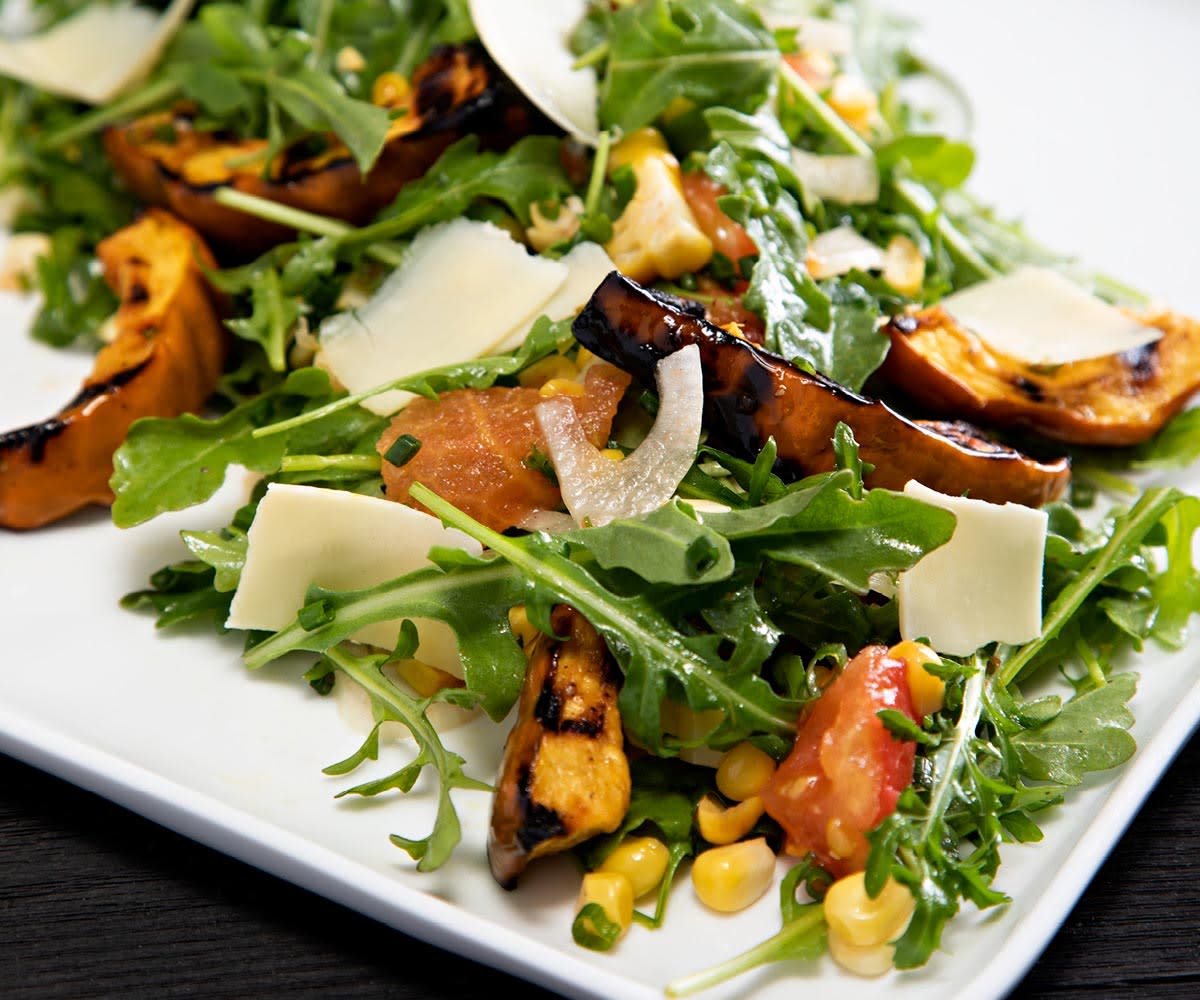 Wash vegetables and allow to air dry. While they are drying, preheat oven to 400°F (204°C) or preheat a grill to medium-high.

Toss sliced squash with 2 tsp canola oil and season with salt and pepper. Arrange squash on a rimmed baking sheet in a single layer and bake for 10–12 minutes, or until golden brown and tender. If using a grill, after seasoning, place squash on grill grates and cook 3–4 minutes on each side, being careful to not burn.

Slice tomatoes into fun shapes and place them on a large platter. Season with a sprinkle of salt and pepper.

Place chives, thyme, and gose beer into a small non-reactive bowl. Slowly drizzle in the olive oil. Season with salt and pepper. (Tip: if you want this dressing to emulsify, add ½ tsp Dijon mustard to the sour beer before adding the oil. This dressing will keep for a week in the refrigerator.)

In a large bowl place squash, corn, onion, and arugula/kale. Season lightly with salt and pepper and drizzle vinaigrette over the mix. Toss gently to coat everything, and arrange the salad around the tomatoes on the platter. Sprinkle with sharp cheese and enjoy immediately.

Beer Sensory Notes: A gose is a salted, slightly sour beer from the Leipzig region of Germany. It’s a unique style that likely uses coriander and is soured using Lactobacillus. This creates an incredibly refreshing and lightly tart beer that generally tastes of salt and lemon peel with a bright effervescent character. There should be nearly zero bitterness, and the aroma should be of lemon peel and sourdough. The beer should pour very pale yellow with a light, white head. Acidity and salt should be restrained, not overpowering, and there should be a high level of effervescence, yet when you finish a sip you feel refreshed and ready for the next. Some styles may lay claim to “the most refreshing beer in the world,” but this beer really embodies that title! Two readily available American varietals are Sierra Nevada Otra Vez and Dogfish Head SeaQuench, more of a hybrid gose. Neither is traditional, yet they do a great job of enhancing the style in their own way through fruit additions that don’t mask the flavors of a classic gose. If you’re able to find it, Ritterguts Gose is the best example of the classic style.

What the Beer Does for the Dish: A classic vinaigrette is olive oil, vinegar, Dijon mustard, garlic, salt, and pepper—simple! In this recipe, the gose replaces the vinegar and lends a lemon-peel character to brighten up the acidity in the vinaigrette. Depending on the beer you choose, you can get different notes from each. Otra Vez has prickly pear and grapefruit in it, which will provide a bit of bitter pith and smooth sweetness to the vinaigrette. You still get the classic lemon-peel bitterness, but with the added smoothness from the prickly pear and a bit of pithy grapefruit character. SeaQuench is an interesting take on a gose in that it’s a blend of Kölsch, gose, and Berliner weisse, but retains all the characters of a gose! You’ll get a bit of lemon-citrus character as expected but with the lime’s deeper citrus notes added, creating a refreshing vinaigrette that provides citrus balance to the dish. 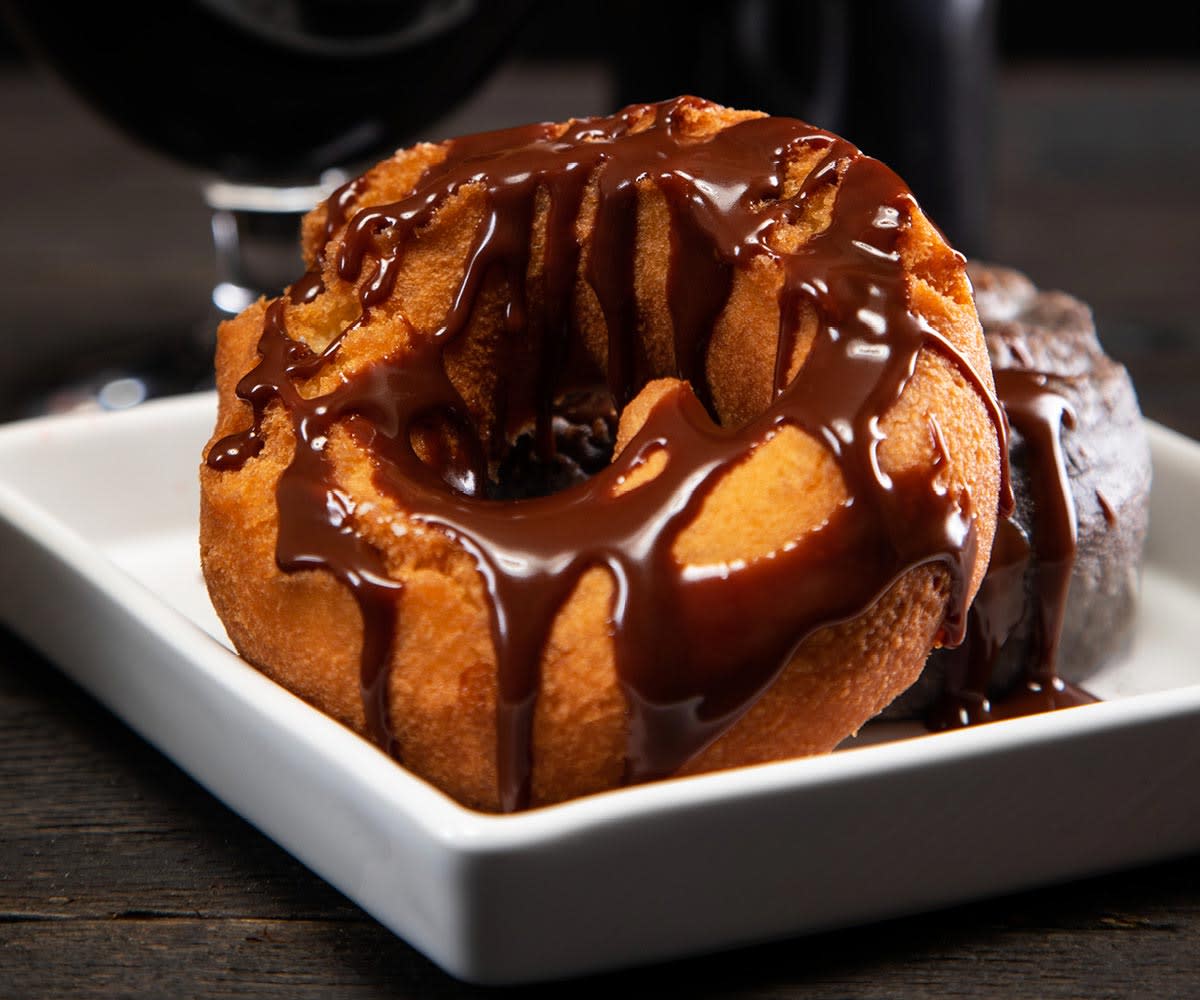 In a medium-sized mixing bowl, beat together butter, vegetable oil, and sugars until smooth. Add the eggs, beating to combine. Stir in the baking powder, baking soda, nutmeg, salt, and vanilla extract.

Stir the flour into butter mixture alternating with the beer, beginning and ending with the flour and making sure everything is thoroughly combined. The batter will be fairly thick; when you draw your spatula through the batter, it will leave a furrow.

Spoon tbatter into the lightly greased pans, filling the wells to about 1/4” shy of the rim.

Bake doughnuts for 10 minutes. Remove from oven and wait 5 to 7 minutes before turning them out of the pans onto a rack. When cool, glaze the donuts with Dark Chocolate Sauce.

Beer Sensory Notes: There are two beers you can use for this recipe: a sweet stout (or milk stout) or a foreign export stout (tropical stout). The flavor you want the sauce to have will affect your choice. A sweet or milk stout will be rich and creamy, due to the lactose, with quite a bit of balance against the bitter coffee/chocolate flavors. There will be a touch of bitterness in the beer, with low to medium hops bite/bitterness. The mouthfeel will be extra creamy due to the lactose, and you’ll get a touch of bitterness on the tongue. The finish will be a bit of lingering sweetness. Examples include Left Hand Milk Stout, Samuel Adams Cream Stout, or your local milk stout (assuming it’s sweeter and not as bitter as a classic stout).

On the other hand are tropical stouts, which are a different take on your classic stout due to their fruity-ester nature instead of the classic rich, roasted characters alone. The head will pour a nice tan color, and you will immediately smell a mix of bitter chocolate or espresso mixed with some dark-fruit notes such as plums, figs, dates, or raisins. Generally, this tropical stout was brewed at a higher ABV, so it will have a heavier mouthfeel, mimicking the notes of the smell, with a bit more roast character prevalent. It will finish smoothly, if a touch dry. The classic and best tropical stout is Lion Stout from Ceylon/Lion Brewery, and it should be available everywhere (thanks Sri Lanka!). Other options are Jamaica Stout by Big City Brewing (Jamaica) or Dragon Stout by Desnoes & Geddes Limited (Jamaica). Either way, with this donut, you can’t go wrong!

What the Beer Does for the Dish: If you want a sauce that’s rich, smooth, and creamy, you’ll choose a sweet stout or milk stout, and you’ll get something like a milk-chocolate sauce with just a hint of roasted characters. If you want a sauce that has a bit more dark-fruit character with a lot more dark chocolate, espresso, and roasted character, choose the tropical stout, and this will create more of a fruited, high-percent cacao chocolate to pair with the sweet donut. Think of an 85-percent cacao chocolate bar, loaded with figs or dates, sprinkled with espresso, and this is the flavor you should get in the sauce.