The idea of making beer with flaming-hot rocks conjures an indelible mental image, yet the common understanding of what “steinbier” was is almost totally wrong. Here, Lars Marius Garshol explains the methods of a lost farmhouse style.

As we all know, steinbier is an old lager style from Franconia, made using hot stones to boil the wort.

The problem is that none of that is true.

We can trace our misunderstanding back to Michael Jackson. In his Beer Hunter TV series in the 1980s, when visiting the Rauchenfels brewery in Neustadt bei Coburg, Upper Franconia, he said the brewery came up with the idea of making a stone beer when business was going poorly. The recipe came from an earlier tradition for brewing beer with hot stones, in the time before people had metal kettles. Rauchenfels used the stones to boil the wort, Jackson said.

Here’s what’s really weird: Most of that is technically true. It just doesn’t mean what it seems to mean.

Gerd Borges, who started brewing steinbier at Rauchenfels in 1982, said he learned how to do it from audiotapes recorded by the last steinbier brewmaster, who died in 1965.

However, the old steinbier brewmaster was not from Franconia. He was from Austria. Carinthia, the country’s southernmost province, is a fertile valley locked in by the Alps on every side. It’s exactly the sort of isolated place where you would expect old traditions to survive—and, indeed, two commercial steinbier breweries remained in operation until 1917, toward the end of World War I.

So, first of all, the steinbier tradition actually comes from Carinthia, not Franconia. There is no sign that anyone brewed steinbier in Franconia before Rauchenfels did.

Steinbier appears to have been brewed in Carinthia—as well as neighboring Styria and parts of Slovenia—for a very long time. It was only in the 18th century that the brewers got competition from so-called “kettle brewers” making more modern beers. The farmers in the area also brewed steinbier, and the commercial brewing shows clear similarities with farmhouse brewing.

The locals described it as “the people’s drink number one,” and even as the “Carinthian national drink,” so it was definitely popular. In 1820, 80 percent of the beer sold in the provincial capital of Klagenfurt was steinbier. About a decade later, it was reported that the citizens of Klagenfurt would go en masse for hikes on Sundays to visit “steinbier inns” in the countryside. When brewing finally ended, it appears to be not so much due to waning popularity as to the difficulties of getting raw materials during and after World War I.

Outsiders were often more skeptical of the local steinbier. One travel writer described it as “the worst drink in the world.” In the 18th century, the national government took steps to instead promote modern beer, which they called “kettle brewing.”

How They Really Made Steinbier

We know how they brewed steinbier in some detail, thanks to the audiotapes mentioned above and other documentation. Here I’ll describe the methods of the Klagenfurt commercial breweries. There were other ways of brewing steinbier, but the main contours are similar.

These breweries really did not have any kettles whatsoever, which is why they were using stones. It’s not that kettles didn’t exist at the time; it’s just that, historically, they were very expensive.

So, imagine for a moment that you’re going to brew somehow, without using a kettle. What would be your first problem? That’s right: mashing. How would you do it?

As we know from the traditions of raw-ale brewing, boiling isn’t necessary at all; historically, in fact, boiling was not even common practice. However, if you want to brew beer, you absolutely must heat the mash somehow. As you might expect, a steinbier brewery used hot stones to heat the mash.

Beyond that, pretty much everything about steinbier veers into the unexpected. The Rauchenfels brewmaster probably did listen to the steinbier audiotapes—but he seems to have disregarded everything in them except the idea of using hot stones.

The steinbier breweries actually malted their own grains. Even more surprisingly, they typically used a third each of barley, wheat, and oat malt in their grists.

They dried the malt on a kiln that consisted of a chest-high masonry box, with a drying surface of wickerwork on top, sloping up from the sides toward the middle. On the floor was a wood fire, the heat and smoke going up through the malt, smoking it powerfully. Unusually, they specifically used cherry wood.

These kilns were very similar to kilns that were used in farmhouse brewing in Scandinavia, including the såinn used in Stjørdal, Norway. The rootlets were not removed from the dried malt—another similarity with farmhouse brewing.

When it was time to mash, they heated stones over a wood fire for about two and half hours in a structure called the grumatl. Then they removed the stones with steel tongs and placed them in wooden baskets, which were first soaked in water so they wouldn’t catch fire.

In the mash tun, they placed juniper branches in the bottom as a filter—yet another similarity with farmhouse brewing. They added a little water, then threw in the stones. Then they would dump in “a small sack” of hops—this was deliberate, so that the hops would roast on the stones, filling the room with smoke. After one minute, they added more water and covered the mash tun for 10 minutes.

Finally, they would begin adding malt, starting with the oats. They stirred these in immediately, taking care not to upset the juniper branches on the bottom. They added some more hot and cold water at the same time, before adding barley malt.

They mashed the wheat malt separately in a small vessel, also using hot stones until it boiled. They left this until the next morning when they dumped everything into the main mash tun. Then they added about 20 kilos (44 pounds) of hot stones to heat the large tun, slowly bringing it to a boil. (Wouldn’t it be nice to know which mash temperatures they hit? Sorry, no luck there. They didn’t use thermometers at all. That's farmhouse brewing for you.)

After a few hours, they were ready to lauter from the mash tun through the juniper branches. They would pour the wort back until it ran clear—a homebrew-style vorlauf step—before running off, cooling, and pouring it into fermentors. 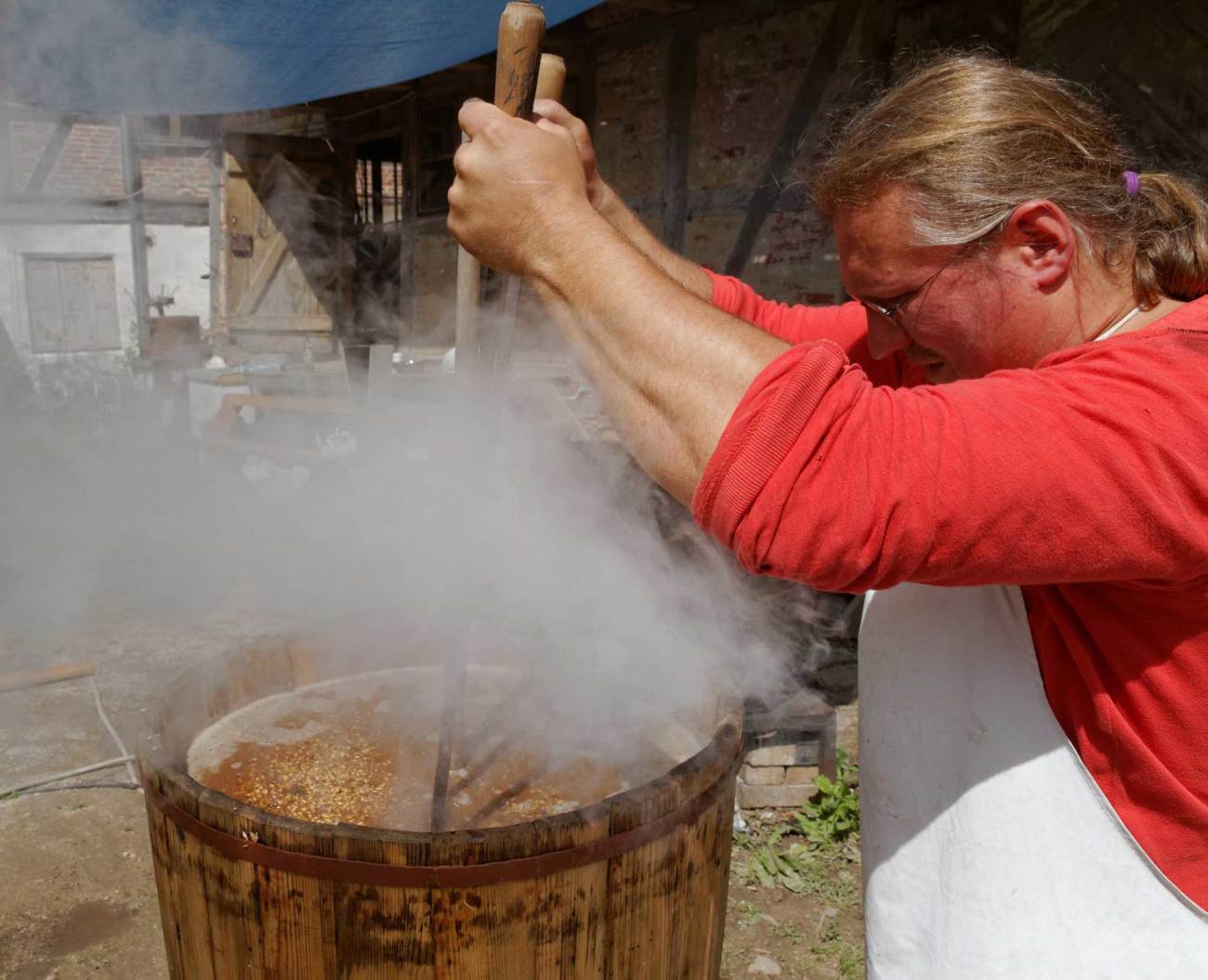 In older times, the steinbier brewers must have had their own yeast, but by 1917 they had started using hefeweizen yeast from breweries in Munich. This is probably also why the pitch temperature was 22.5°C (73°F)—because of the yeast they were using. What’s clear is that steinbier was never a lager style, traditionally.

We do know the strength of the wort because for every brew, an official from the tax office would come by to verify the amount of wort and its strength. The typical gravity appears to have been 1.024 SG, so this steinbier was like a weak table beer. There was also an earlier variety known as koritniak, which was around 1.036 SG.

It fermented for seven to 10 hours in the main fermentor, then it went into casks and continued to ferment there. After two days, it was ready, but it might not be served right away.

The inns served it by placing a cask on the floor, then inserting a wooden pipe—which apparently caused massive foaming. Clearly, the steinbier built up considerable pressure inside the casks. People drank the beer from small earthenware mugs. Many sources say the beer never cleared—probably because it was not boiled.

So, what did steinbier actually taste like? Unfortunately, nobody alive today can tell. The sources say it was lightly acidic and very smoky, which seems reasonable. It may have been phenolic, with some banana aroma from the yeast. It also must have been very light, but probably quite full-bodied since they used oat and wheat malt and never boiled the proteins out of the wort. There must have been some typical raw-ale flavor, too.

What’s certain is that it must have been very different from the many re-creations of “steinbier” inspired by Michael Jackson’s report from Rauchenfels. Here are the key takeaways: Steinbier was a raw ale, and the hot stones went into the mash, not the wort. If anything was boiled at all, it was the mash.

Most writing about steinbier emphasizes that the stones they used were greywacke, a type of gray sandstone. The commercial breweries in 20th century Klagenfurt did use that type of stone, but we also know that other brewers used porphyritic diorite, and some a red sandstone. The important thing is to use a type that doesn’t explode when heated, since that can be dangerous.

Yes, they were—and, as it turns out, people have brewed with hot stones all over Europe. The more famous steinbier style comes from Carinthia simply because brewing with hot stones survived for so long in commercial brewing there. Again, that’s probably because it’s such an isolated area with a population large enough to keep the tradition going.

However, there are well-documented reports of stone-beer brewing from all the Nordic and Baltic countries plus Russia and Belarus. In northern Russia, there are still people brewing stone beer; the tradition is not entirely dead in Latvia and Lithuania, either. It’s likely that people once brewed with hot stones in Franconia, too, even if we have no record of it.

The stone beers in these countries were not all weak beers fermented with hefeweizen yeast and made from barley, oats, and wheat smoked with cherry wood. What they do have in common is the use of hot stones in the mash rather than in the wort. We should really think of stone beer as a mashing method, like infusion or decoction mashing. The actual beers could be of many different kinds.

In Finland, the Hollolan Hirvi brewpub way out in the countryside is still making stone-mashed sahti. The brewer, Ilkka Sipilä, learned the method from his father in the 1960s. So, if you want, you can taste authentic stone beer today. All you have to do is go to Finland.

Left: An improvised brick oven heats the stones. Right: The mash visibly boils in the left of the mash tun where a stone was just dropped.

Podcast Episode 216: Lars Marius Garshol Is Doing the Research and Shifting the Paradigms