Gearhead: The Force Behind the Fizz

How spunding valves can help your yeast pull double duty.

One of the effects of natural carbonation is a pillowy head with a tight bubble structure.

Water, malt, hops, and yeast are, of course, beer’s four critical components, but thinking that’s all it takes to brew a fine beer would be overlooking the most ephemeral of its ingredients. The gas that’s dissolved in beer—the bubbles that it forms and that spring so readily from within—is an underappreciated piece of the whole picture.

It’s the force behind the fizz and the foam that’s intrinsic to beer, and it’s crucial to the whole sensory experience of enjoying a beer. While no skilled brewer would ignore carbonation levels, the typical procedure for ensuring the correct levels of carbonation in a brew is about force, not finesse.

There’s another way, rooted in tradition and exploiting the same biochemical reactions that create alcohol, and the brewers devoted to natural carbonation say that it results in a better drinking experience. All it takes is pressure and time.

“Everybody can do it!” says Ashleigh Carter of Colorado’s Bierstadt Lagerhaus, a vocal proponent of the technique. Called “spunding,” the approach is that instead of relying on an external source of carbon dioxide, some of the carbon dioxide produced by yeast during fermentation is retained within the beer. Developed hundreds of years ago by German brewers working under the constraints of the inflexible Reinheitsgebot laws, spunding is as simple as sealing a vessel toward the end of active fermentation.

Without a blowoff and with no place to go, the carbon dioxide is instead dissolved into the liquid. Brewers dedicated to this method use a simple valve to manage the pressure level in the tank and, thus, the amount of gas that ends up dissolved in the beer.

“It’s basically a pressure release valve,” or PRV, Carter says about the commercial spunding valves used at Bierstadt. Built by German brewing equipment manufacturer Barby Kühner, the spundapparat (literally: “bunging apparatus”) comprises an airlock-like valve, which can be adjusted to dial in the exact pressure that it will hold, and an integrated gauge that shows the tank’s pressure.

Similar devices are also manufactured by GW Kent, Ss Brewtech, and others, with various pressure ratings and fitting hardware from tri-clamp to ball lock.

“Fermentation makes its own carbon dioxide,” says Chris Enegren, founder and brewer at Enegren Brewing Company (Moorpark, California). “Usually it just blows out into the atmosphere. Why not use it?” The 8-year-old Southern California brewery specializes in classic German styles—especially lagers—and Enegren learned about the spunding technique during a research tour of German breweries. As his brewery developed, he integrated the technique wherever he could and says that spunding produces a finished beer with a more European character. 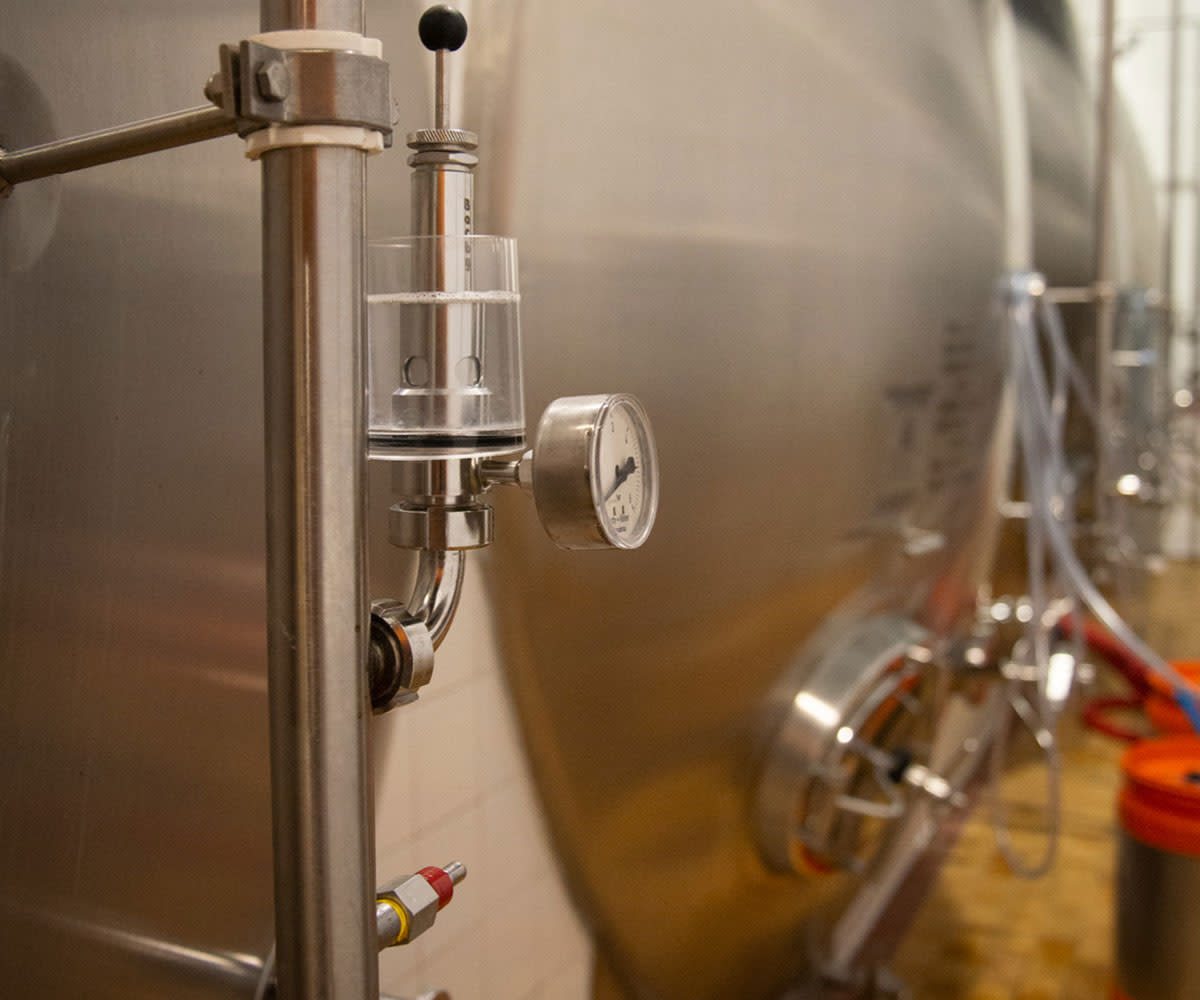 Each tank at Bierstadt Lagerhaus is outfitted with a spunding valve to capture carbonation naturally produced by fermentation.

“The bubbles are smaller, the head is denser, and the beer hasn’t been scrubbed clean,” he says. Bierstadt’s Carter agrees, calling the beer’s texture “softer” with a “tighter and firmer head.” Both brewers mention the retention of certain sulfur compounds in the beer that would otherwise be lost in an unsealed fermentation and that are a signature aspect of the lagers they aspire to brew.

The technique of spunding also naturally fits into the slower, colder, lager-brewing process. Without diving too deep into the physics of carbonation, I’ll just say that the amount of carbon dioxide that can dissolve into a beer is affected by two main variables: pressure (which the spunding valve handles) and temperature. The colder a liquid is, the more readily it absorbs carbon dioxide. A lager’s cold-conditioning phase is the perfect time to spund a tank and allow the yeast to slowly add carbonation to the beer.

“If you force carb, you get coarser bubbles, but if you carb slowly, the bubbles are tighter and the head is firmer,” Carter says. It takes experience and finesse to manage all of the variables of a typical fermentation, and the spunding technique adds more complexity to the process.

“It’s an issue of timing,” Enegren says. His rule of thumb is to seal a tank (he ferments and conditions in typical vertical cylindroconical vessels) between two and four gravity points above terminal gravity. Carter’s standard procedure is likewise to seal the lagering tank when the beer is 1°Plato above the expected final gravity.

Once the process is dialed-in, both brewers say the natural carbonation eases stress on the production schedule as typical brite-tank residency (the bottleneck of so many craft breweries) is greatly reduced. Both brewers also still use some amount of forced carbonation to get the carbonation levels perfect, but a top-off with a typical carb stone in the brite tank is quick and means every keg leaves the brewery perfectly carbonated. 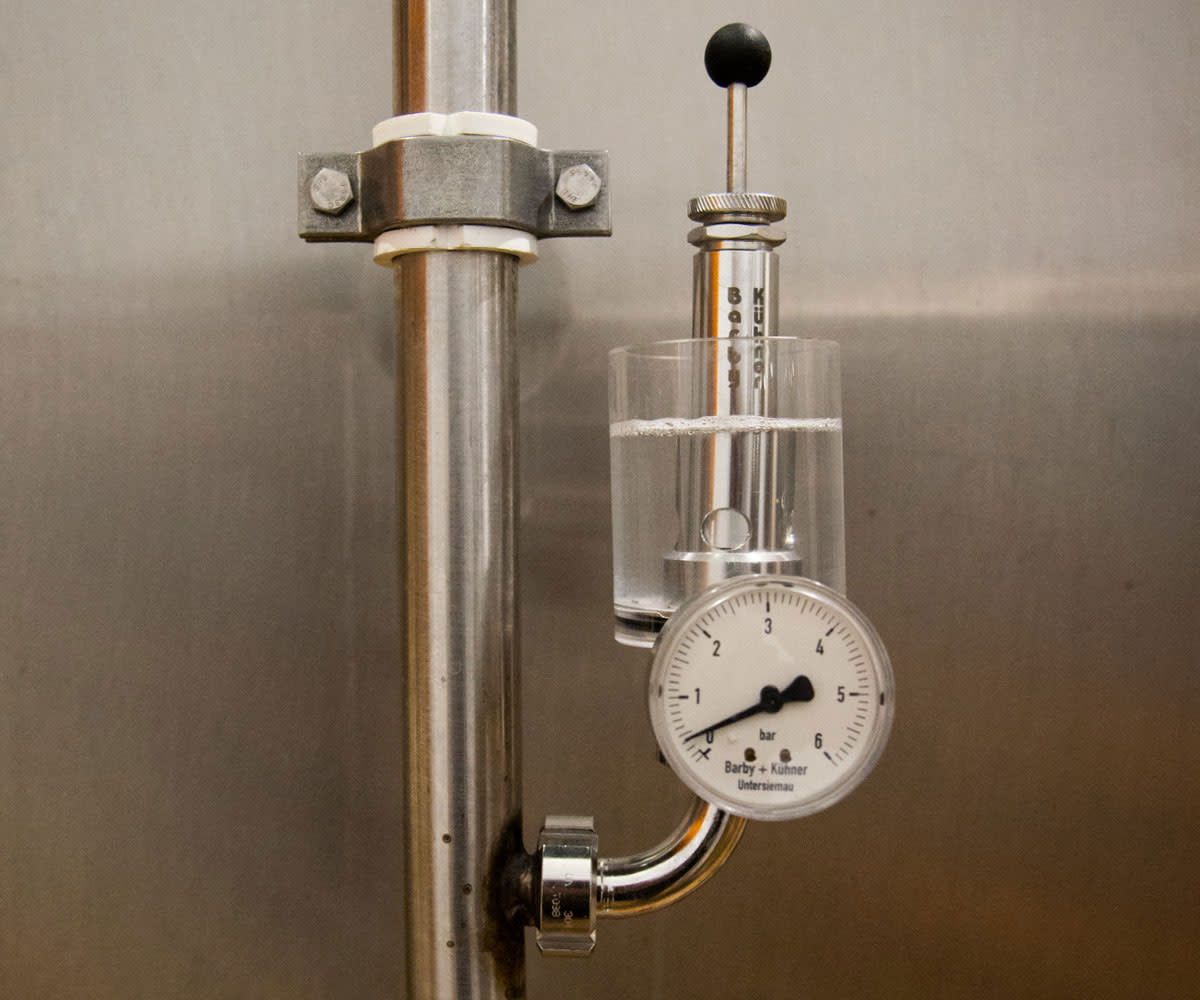 A spunding valve, up close

“It’s easier to add a little more carbonation to a beer than it is to take gas out of an over-carbed one. We are thinking about carbonation levels during the whole fermentation, not just at the end,” Carter says, and she is particularly passionate about the bubbles within, and the foam atop, glasses of her beer. “Carbonation has flavor: it’s acidic—carbonic acid—and it balances malt sweetness,” and getting the level of carbonation in each style she brews is critical to the final flavor profile.

“I like Pils spritzy,” she says (she carbs Bierstad’s signature Pilsner to almost 3 volumes of CO2), “but too much carbonation is distracting.” For example, Bierstadt’s dunkel features less carbonation to prevent its complex European malt flavors from becoming overshadowed by carbonic bite.

This delicate balance is one reason that both Carter and Enegren rely on natural carbonation for their lagers: Without an assertive ester profile or the other flavor characteristics produced by ale yeast, the flavor of lagers is more stark, and flaws are shown in sharp contrast.

Both brewers believe that spunding helps them craft clean, authentic lagerbier, and they also cite other benefits to spunding, including cost-reduction (they use less bottled carbon dioxide), easier production management (force-carbing in brite tanks is greatly reduced and makes scheduling easier), and of course, the improved foam.

“Beer is not beer without foam!” Carter says. “It’s the only beverage that foams, and a brewer should try to maximize this.”

The idea is on display whenever someone orders a slow-pour Pils in the Bierstadt tasting room. Like an ice cream sundae with a crowning dollop of whipped cream, the glass of Pils is delivered to the thirsty patron—after a few minutes of pouring and waiting and pouring and waiting—topped with an impressive foam-stand. It’s visually striking and texturally exciting. The foam holds in the hops aromas that otherwise are lost into the room, and the malt sweetness is allowed to play across the palate without the interference of the tingle in the trigeminal nerves that a fizzy beer causes.

“There’s less bite,” Enegren says, “and the carbonation is more integrated. You can better taste the depth and complexity of the beer.”

In the era of “boss pours” and lackluster head retention, a dense and tenacious head that clings to the glass, leaving rings with each sip, has become a rare sight.

Carter and Enegren both lament the loss of this erstwhile hallmark of quality brewing, and both recommend a return to natural carbonation techniques as a remedy for lackluster lagers.

Don’t call it a by-product. Yeast is going to make carbon dioxide while it’s making alcohol, and retaining this natural gas in the finished brew is simple, scalable, and economical. Spunding is a holistic approach to brewing that works from the homebrew scale to thousand-barrel batches, and it’s a key to better bubbles and felicitous foam.

Patience for a Pint: The Art and Science of the Slow Pour

It’s hard not to smile at a proper slow pour. A thick head of foam rises above the rim of the glass like a cloud trying to escape its liquid world. A number of breweries and beer bars are pushing the practice and creating converts with each new glass.