Fire up the grill and break out the lagers. These three tasty dishes are designed for sharing and are surefire ways of exploring the flavors of beer in food. From the minds and kitchens of Justin Kruger and Justin Wright, the Two Fat Justins. 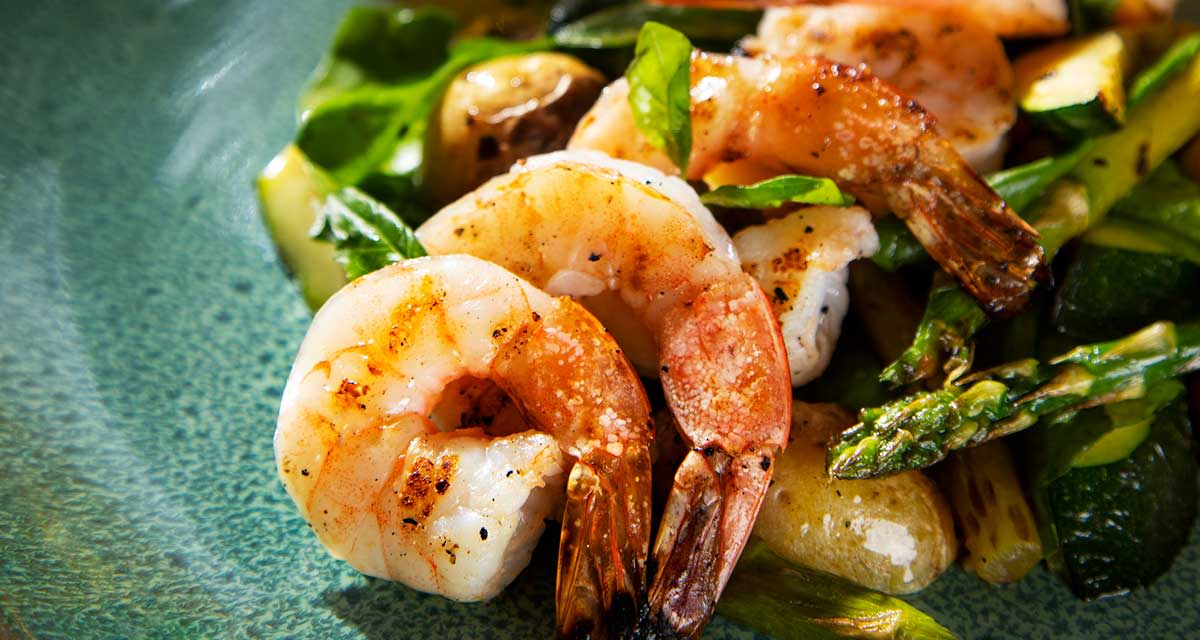 In a small bowl, mix the honey, beer, paprika, and a pinch of salt and pepper. Set aside.

Lay out the vegetables on the grill and cook until they have reached the desired char, then place into a bowl with 2 tablespoons of the beer mixture. Add the spinach and herbs and toss. Season to taste.

Place the shrimp skewers on the grill and cook for 2 minutes, then flip and begin to brush with the remaining beer mixture until the shrimp are cooked through.

Portion the charred vegetables onto 4 plates and top with the grilled shrimp.

Beer Sensory Notes: Spaten Brewery in Munich created the helles in the 1890s, a departure from the city’s preference at that time for darker lager. Delicate but malt-forward, it should pour a very light golden color with an inch or so of creamy, white head. The aroma should be lightly sweet, and the taste should be similar, with low hop bitterness and hop flavor. While this style is simple, it is incredibly refreshing and enjoyable in larger formats due to its low ABV. Classic examples include Löwenbraü Original, Paulaner Premium Lager, Spaten Premium Lager, and Weihenstephaner Original.

What the Beer Does for the Dish: During cooking, the helles will add extra sugar to the process, allowing for more char and caramel character. In this recipe, it will ensure that the shrimp have a nice, rich exterior for the cook time. When you add the beer mixture to the vegetables, the helles will lightly enhance the char character, and the subtle aromatics of the beer will bring forward all of the herbal notes from the vegetables. Overall, this beer will subtly bring out more herbal and roast character from the entire recipe. 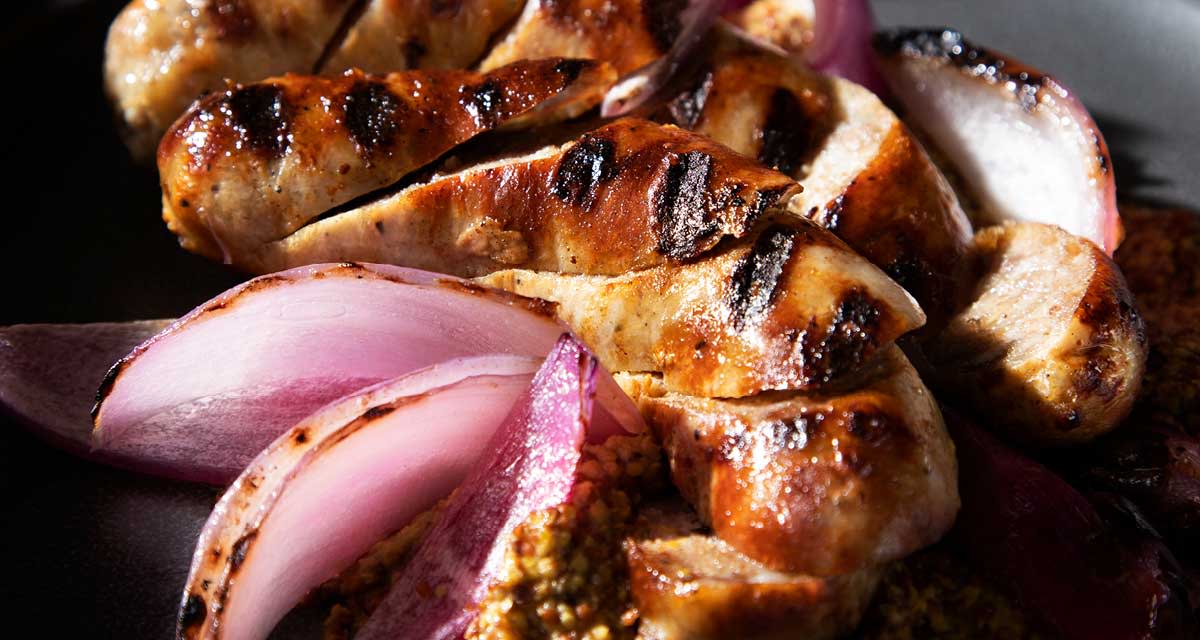 Canola oil as needed
-1 yellow onion, roughly sliced
-4–6 cloves of garlic, diced
-2 bottles of your favorite dunkel (one for cooking, one for drinking)
-4–6 quality bratwurst

In a medium-sized Dutch oven, drizzle enough oil to barely cover the bottom of the pan and bring to medium heat. Toss in the onions and garlic and cook until the onions are lightly golden brown. Pour in one bottle of dunkel and bring to a low simmer. Gently place the sausages in the pan and cover, then reduce the heat to low. Cook until the sausages are fully cooked: 155°F (68°C) internal temperature or higher.

While the sausages are cooking, fire up a gas or charcoal grill to medium-high heat.

In a blender, combine the mustard seeds and mustard powder and blend on medium until the seeds begin to break down. Add the rest of the ingredients and puree until the mustard reaches desired texture. Adjust seasoning with vinegar, water, and salt as needed.

Beer Sensory Notes: A dunkel (or dunkles) is a classic dark lager from Bavaria. In Germany, “dunkel” means dark, and this beer can range from amber to a dark reddish-brown. It pours with a light- to medium-tan head with a creamy texture. For its traditional ABV of 4.5–6 percent, it is deep and rich, with sweetness like bread crust, and various hints of chocolate, caramel, and toffee. Hop aroma is usually subdued but can be floral or herbal, seldom spicy. The flavor is enhanced by the Maillard process from the malting process and the boil, which adds to the depth, making the mouthfeel full-bodied without being overly sweet or cloying. It should finish with a touch of sweetness that lightly lingers. Traditional examples include Ayinger Dunkel and Hacker-Pschorr Munich Dark, poured into a pilsner glass (pokal), or a classic pint glass.

What the Beer Does for the Dish: A dunkel and a sausage with mustard—what a classic, delicious pairing, whether at a German beer hall or a great beer restaurant with quality sausages. This particular recipe will up your flavor game. Usually, brats are steamed in a broth or plain water, but this method will infuse your brats with a deeper flavor profile. The light aromatics from the hops will enhance the herb flavor of the brat, and the rich malt character of the beer will meld with the naturally sweet flavor of the bratwurst meat. The caramelization from the grill will match the flavor of the caramelized malts, adding more depth for those dark flavors. Don’t forget the mustard—the vinegar tang, the fresh dill/fennel/coriander flavor, and the earthy vegetables are made more vibrant and balanced with the dark malt and light floral-hop character from the beer. 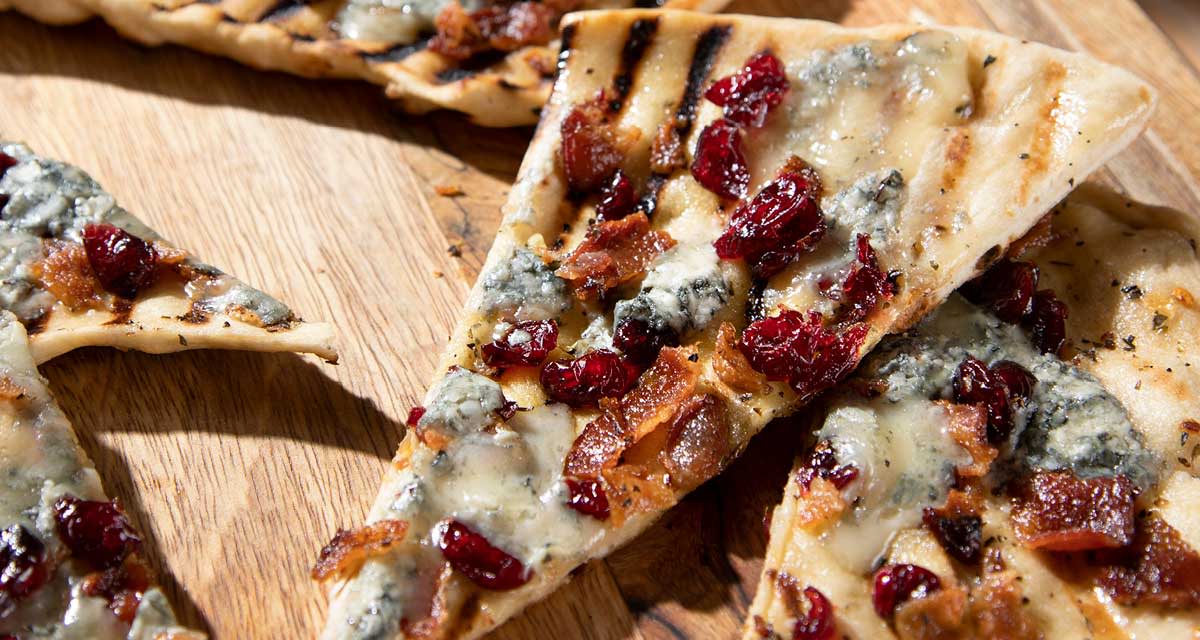 Add ingredients to the bowl of a stand mixer in the following order: yeast, beer, all-purpose flour, salt, and olive oil. Mix on low with the dough hook for 7 minutes. Place the mixed dough into a lightly greased bowl, cover with a towel in a warm place in your kitchen, and allow it to sit until it doubles in size. Portion the dough into 6 oz (170 g) balls, cover with plastic film, and allow to rest again.

When ready to cook, preheat a gas or charcoal grill to medium-high. Roll out the dough on a lightly floured surface until the pizza crust is thin—about 1/8" to ¼" (3–6 mm) thick. If you are making multiple pizzas, you can stack the dough with a layer of plastic film between the layers of dough.

When you’re ready to grill, lightly oil one side of your pizza and gently lay onto a clean grill grate, oil side up. When the dough begins to pull away from the grill along the edge, flip the dough and cook for 1–2 minutes more.

Remove the dough from the grill and repeat until all of your dough is precooked.

Preheat the grill on medium heat or oven at 350°F (177°C). On the precooked pizza crusts, brush olive oil and sprinkle garlic over one side, then season with salt and pepper.

Arrange the figs, blue cheese, and bacon on the pizza crust and cook until cheese melts and the figs are bubbling, typically 7–10 minutes. Repeat until all pizzas are cooked.

Beer Sensory Notes: There are three bock varieties you can use here, depending on your preference: dunkler bock (think dunkel, but bigger), heller bock (think helles but bigger), and doppelbock (or “double bock,” stronger and richer than the other two, and often darker). The heller bock is the palest version, with minimal toasted/caramel and slight floral-hop notes. The dunkler bock and doppelbock both have deeper roast character from the Maillard process, along with the standard chocolate/coffee/toffee notes typical of this type of darker beer. Both will appear brownish to dark brown with roast character, a full mouthfeel, light tan head, and an easy finish that doesn’t linger. Classic examples of the dunkler bock include Einbecker Ur-Bock Dunkel and Great Lakes Rockefeller Bock. For heller bock, look for Ayinger Maibock, Hacker-Pschorr Hubertus Bock, or Einbecker Mai-Urbock. In North America, the most available options tend to be doppelbocks, such as Ayinger Celebrator, Paulaner Salvator, and Spaten Optimator. Enjoy in a pilsner or tulip glass.

What the Beer Does for the Dish: Typical dough recipes call for water, but who needs water when you have beer? No matter which type of bock you use, the beer will add extra depth from the sweet malt character, and that extra sweetness helps to balance the intense and rich toppings. It’s grown popular to pair barleywine with blue cheese, and this recipe with bock in place of barleywine offers a similar mix of sweet, savory, and funky. Pay attention to how the character of the cheese changes over time—toward the end of the bite, before you wash it down with a sip of beer—you’ll notice how the blue-cheese character mellows and becomes more of a rich, nutty flavor—like toasted walnuts—that pairs well with the figs and uses the garlic and bacon for balance. Each bite reveals a different flavor profile with the beer, for a constantly evolving experience.

Let’s get rustic: Justin Wright and Justin Kruger, a.k.a. "Two Fat Justins," show how French and Belgian country ales can lighten and brighten savory main dishes, while a splash of cherry lambic adds complex juiciness to a simple berry crumble.