American Ian Hoke has discovered that homebrewing abroad presents many challenges and opportunities.

Before moving to Switzerland, here’s what I knew to expect: epic skiing, cheese, seamless public transportation, and ubiquitous chocolate. What I didn’t expect was the beer. The thin, thin, watery beer.

After three years in China imbibing Tsingdao and Kingway (a palate-ravaging formaldehyde stew from Chengdu that cost $3US per case delivered), moving to Switzerland conjured images of dirndle-clad waitresses hauling liters of classic lagers and grocery shelves laden with funky Belgian beers.

Despite outstanding established craft breweries, such as Brasserie Des Franches Montagnes (BFM) or Trois Dames, and a number of upstart small craft brewers, such as Storm & Anchor, Blackwell Brewery, or Bad Attitude, Switzerland is a beer desert to rival China.

Switzerland remains outside of the European Union, despite being nestled in the heart of the continent. German, French, Czech, Italian, and Belgian beers are all imports, and are few and far between. In contrast to neighboring nations, Swiss beers exist in a narrow range from light lager, or helles, to dark lager, or dunkel. Enterprising Swiss breweries crank out the staples, as well as specialty lagers brewed from spelt and corn. Some even approach a German-style pilsner with some success.

In the land of the Alps, diversity of any kind proves an ongoing challenge. For the most part, Swiss beer flavors stand as neutral as their international politics. For a couple who spends most of our summers in the Colorado mountains mainlining superhopped local brews, my wife and I felt so close to the good stuff, but so, so far away.

Homebrew to the Rescue

Years ago in the States, I entered homebrewing through a time-honored method: A buddy got a few buckets and some extract kits for his birthday; we brewed a few beers ranging from involuntary gag reflex to passable; and the hook was set. A few years of life in urban China, however, quashed my burgeoning passion to brew. Not only was I unable to figure out homebrewing in the Middle Kingdom, but also in three years, I never learned my home mailing address! Brewing fell off my radar.

After six months in Zurich drinking Quollfrisch, a local Swiss beer whose name translates, honestly, to “Spring Fresh,” my wife started scanning classifieds for homebrew gear. I wound up buying a complete set of brewing equipment, including 5-liter kegs and dispensing gear, for 160 Francs from a lovely woman mired in domestic strife who encouraged me to “be nice to your wife, or she’ll sell all your shit.” Duly noted! Time to brew that Odell’s St. Lupulin clone again.

Like most homebrewers, my brew buddies and I make what we love with (usually) local ingredients. Just as many of the first wave of contemporary American homebrewers sought to replicate European beers absent in a U.S. market dominated by homogenous corporate lagers, we focus on styles we can’t buy here: hoppy pale ales and their kin, Belgian-style sours, and the farmhouse ales that appear to be more popular every day Stateside.

The homebrewer less adept than my wife at surfing expat classifieds can find two fine Swiss brew suppliers in the Zurich area, ready to sell similar kits and dispense similar advice about the right and wrong ways to brew. Many Swiss brewers opt for an electric kettle of the sort used for cider or canning, giving it double duty as a mash tun. Gas burners are available but are either weak or just shy of jet propulsion, unpopular because small apartments, cramped balconies, and fire create exciting opportunities that are decidedly un-Swiss. 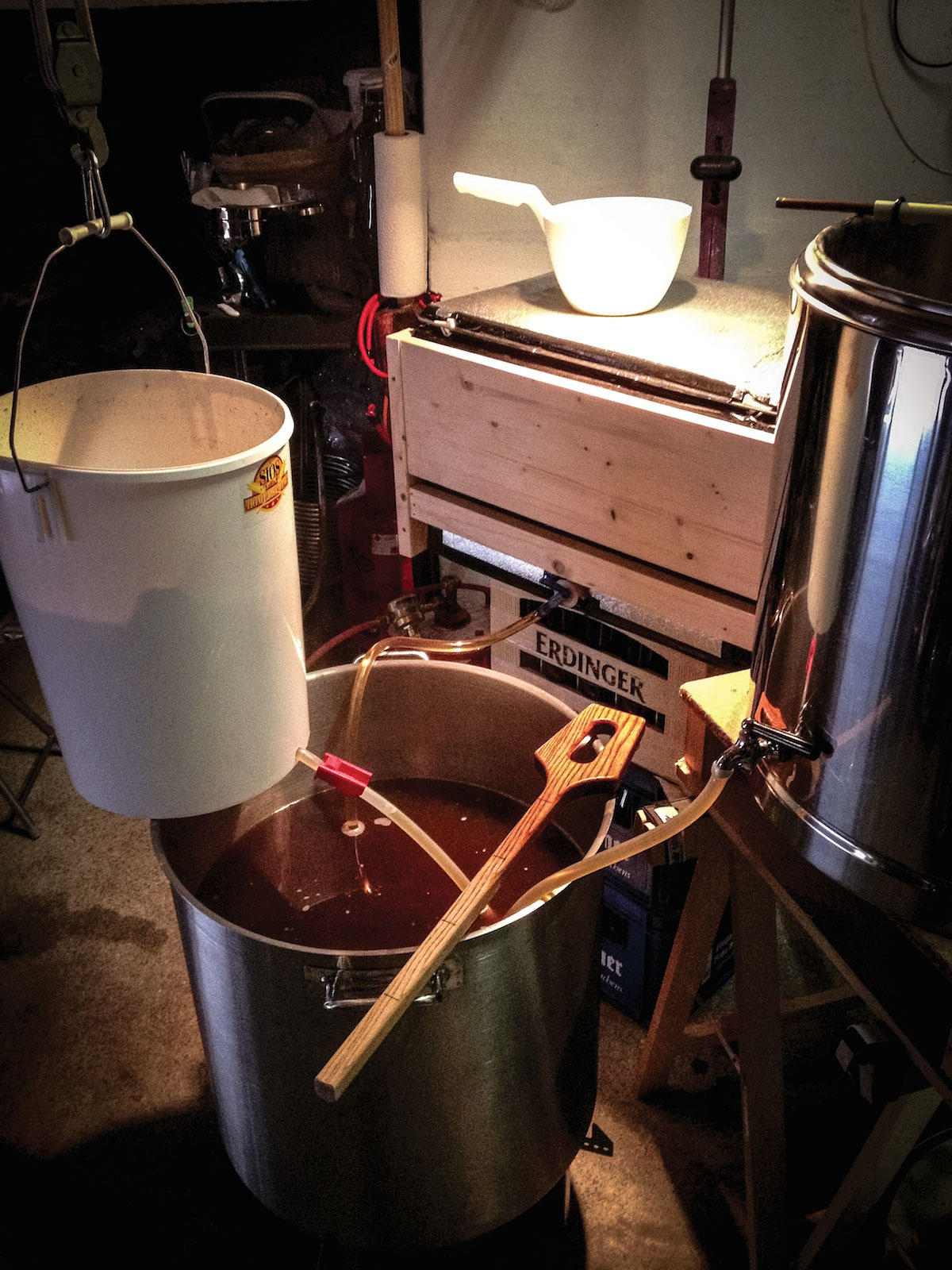 Of our local brew suppliers, Sios in the bucolic town of Wald is the most engaging and homebrew friendly. Richi, the owner-operator, is a talkative guy who always has beer on tap for the leisurely shopper and will usually send me away with a few bottles of his Ur-Alt or the lager-of-the-month. Several iterations of his cracked black pepper dunkel have been excellent.

Keep up with the latest trends in homebrewing and craft beer with a subscription to Craft Beer & Brewing Magazine®. Subscribe today!

Sios also operates the SIOS-Trophy homebrew competition with some rigid, interesting categories that have evolved from Reinheitsgebot-only to a more international, inclusive selection including beers aged in wood, beers brewed with—gasp—adjuncts or “interesting” ingredients, and pale ales. Richi has also been known to fire-brew a beer during the yearly Craft Bier Festival, organized by Bier Factory Rapperswil and held in a castle courtyard in Rapperswil, a picturesque town on Lake Zurich. 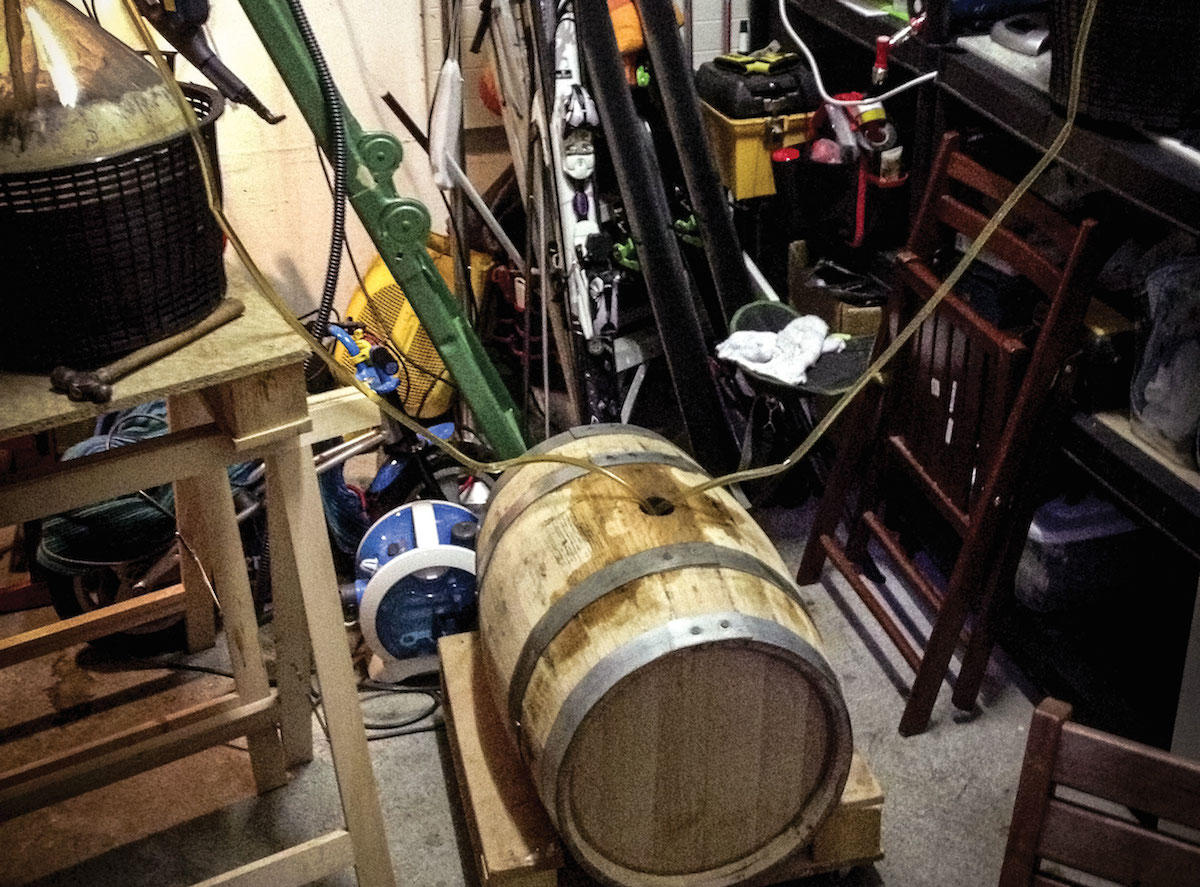 In four years of regular visits to Sios, I have never failed to encounter a fellow homebrewer from Germany or a distant corner of Switzerland picking up a pilsner kit or ingredients for lager done like Mamma used to do. In the land of bottom fermentation, it seems hilarious to spend time replicating everything on the shelf at the corner store, but homebrewers make what they love, no matter where they are on Earth.

Forging connections with good people such as Richi in the Swiss homebrewing world has been essential to successfully navigating this landscape. For example, in Zurich, every recipe needs a small percentage of acid malt to fight our hard, mineral-laden water, or the mash won’t convert. Funky tax rules exist, as well, even for personal production once the homebrewer crosses a fairly low yearly liter threshold. A little local knowledge provides a big boost.

Besides Richi, I have been lucky to meet a small cohort of brilliant brewers, including Sam Aeschlimann, the author of the _Eureka Brewing _blog, a PhD course in recipe development, yeast styles, and bacteria of all kinds. Sam is also the proprietor of the aforementioned Blackwell Brewery, winner of the Best New Brewery award in Switzerland for 2013.

At a recent gathering, homebrewing friends from at least five countries converged in Zurich for a Sour Fest, and bottle after bottle, Sam gathered bugs in prepared slant tubes for cultivation and storage. Sam is a great guy to know, even if we ignore his almost savant-like ability to blend sours and brew uberbeefy Imperial Stouts that reach well over 20 percent ABV.

Weyermann (a major German maltster) is the premier malt sold in Switzerland. A regular topic of conversation with like-minded Swiss brewers is ways of blending Weyermann malts to replicate British or North American malt profiles. Using what is readily available and cheap, we’ve made wheat IPAs, sweet rye porters, hoppy Munich ambers. Vienna malt, with notes of caramel and tree nuts, lends a velvety mouthfeel to saisons and pale ales, even at lower mash temperatures. Most recently, pilsner malt IPAs, boiled long and hot, have become a favorite of mine.

Noble hops from Tettnang just across Lake Constance in Germany are nice for a bittering hops, or blended with big, citrusy American or New Zealand powerhouses such as Citra, Simcoe, Pacific Jade, or Nelson Sauvin. Perle hops are considered a native Swiss hops, but their grassy character needs support for my palate.

Bier Factory Rapperswil has recently produced an IPA named “Hopp Schwiiz,” which uses the first commercial example of an American and Swiss Perle hops blend, resulting in a nicely balanced IPA with solid hops bite and aroma. And they produced this beer just in time for the Winter Olympics: Hopp Schwiiz in Swiss-German means “Go Switzerland!” 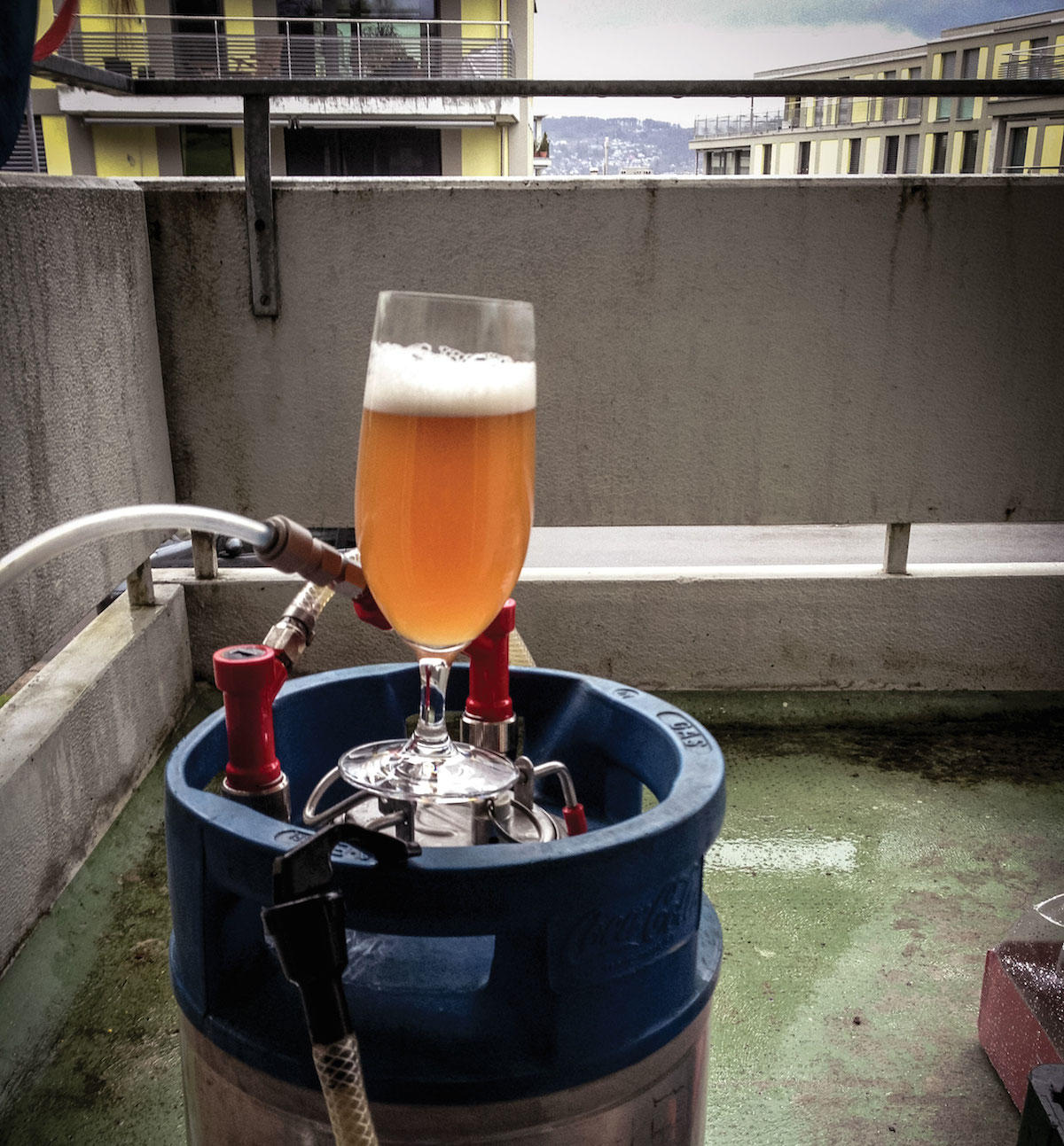 Brewing an American-style bitter beer is risky for any Swiss brewer, because the local palate loathes what they refer to as “cat piss” flavor and aroma, the same dank bite we love from an Avery Maharaja. And yet, there seem to be more options every day.

So maybe the Swiss beer scene isn’t as dire as it seemed at first glance, and the craft beer industry is blooming. Still, for the homebrewer, the dangers of translation vary from absurd to alarmingly real.

Often, salespeople speak enough English to save the day. I once had several long conversations about what size cock I needed when I sought to install a tap on my brew kettle. I found myself repeating, straight-faced, that I wasn’t sure, but that I had heard size didn’t matter. The saleswoman was adamant that it did, so I opted for slightly above average.

For eighteen months, my brewing partners Brian Wilson, Elias Barlow, and I brewed rye pale ales and saisons with rice hulls that we later realized were rice flakes, leading to some volcanic fermentations and hot, boozy brews. Oops!

But language struggles are not always harmless. When Brian took my empty CO2 tank to be refilled, his fledging German seemed to hit an odd roadblock. After twenty minutes of gesticulating and earnest prodding by the salesman, Brian used Google Translate on his phone to clear up the word that he felt he was stumbling over: Theft. Gladly, he escaped Swiss prison!

Still, when we tap a keg after a hard day of skiing Davos, paddling the Vorderrhein, or riding Graubünden singletrack, the minor obstacles of homebrewing abroad disappear from memory. Already gorgeous, Switzerland looks better with a homebrewed double IPA in hand.

These rustic, craft-beer destination spots are tucked away in high country, and they’ll be the perfect way to top off a day on the slopes.