How to Brew Your Best IPA Ever

If you’re ready to take your IPA to the next level, and maybe even win an award along the way, use these tips to improve your odds of making the final round.

India pale ale remains the most popular craft-beer style in the United States. With unprecedented access to a diverse range of hops and plenty of inspiration in the form of innovative breweries across the country, it’s no wonder that homebrewers continue to flock to American IPA.

IPA’s popularity, however, means that those who enter competitions in the India Pale Ale category may need to do a bit more to set their examples apart. If you’re ready to take your IPA to the next level, and maybe even win an award along the way, use these tips to improve your odds of making the final round.

Most homebrew competitions adhere to the beer style guide published by the Beer Judge Certification Program (BJCP). Although the 2015 guide has been available for some time, competitions are still in the process of moving from the 2008 edition to the new standard. So be sure to double check the competition guidelines before you enter to make sure you choose the right style category for your entry. 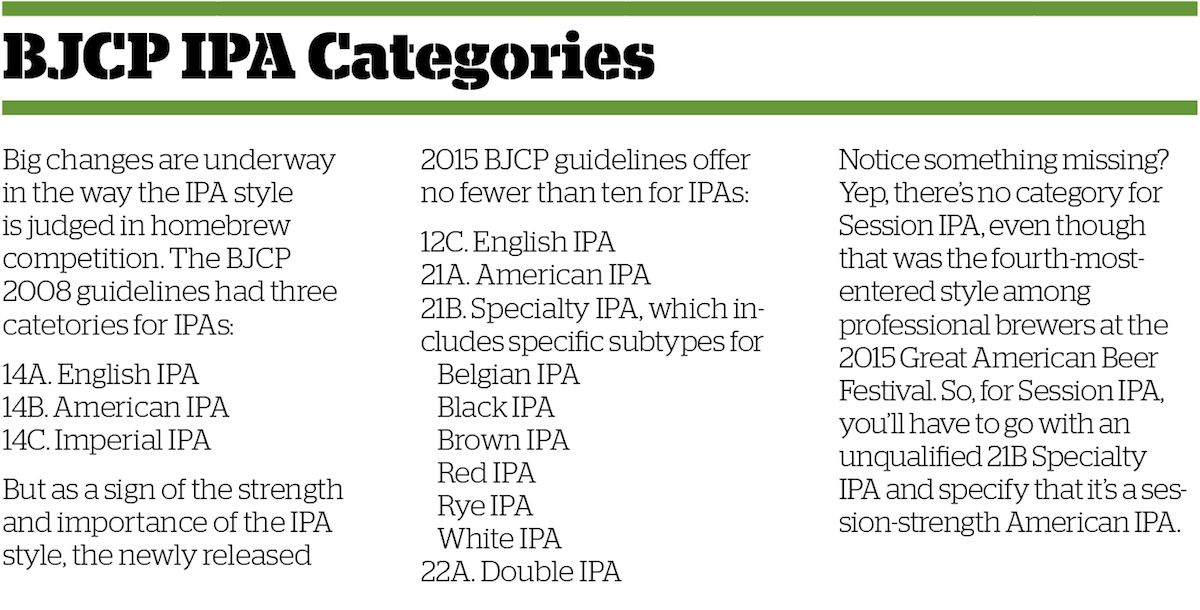 IPA is all about hops, so your choice of hops varieties, quantities, and timing can make or break your beer. For bitterness, look to a clean variety such as Magnum, Nugget, or Galena that will deliver the alpha acids without getting in the way. Syringes of hops extract offer an intense dose of bittering without introducing vegetal matter into your kettle. These concentrated alpha-acid delivery vehicles are especially useful for big double IPAs in which bittering with actual hops would require an obscene amount of hops material.

The sky’s the limit for flavor hops, aroma hops, and dry hops, but getting just the right blend requires knowledge and experimentation. SMaSH (single malt and single hop) beers are a great way to identify the characteristics that individual hops will bring to the party. By blending several different SMaSH beers in your glass, you can approximate how they might play together when you combine them in your IPA.

Hop bursting (the practice of adding generous amounts of hops in the final fifteen or so minutes of the boil) is a beautiful way to introduce intense hops flavor and aroma without risking harsh bitterness. Just choose high alpha-acid hops for late-kettle additions and skip the bittering charge altogether. Good candidates for hop bursting include such potent varieties as Apollo, Bravo, Calypso, Citra, El Dorado, Mosaic, Simcoe, and Sorachi Ace.

When designing your hops regimen, consider aiming low—bitterness, that is. For a number of years, brewers have raced to make IPAs more and more bitter, but the trend is reversing and overly bitter IPAs stand out, but not in a good way.

One of the surest ways to prevent a great IPA from scoring well is to overthink the malt. Brewers sometimes have a tendency to throw in everything but the kitchen sink, but resist that temptation. By all means, include some crystal malt, but use a light malt and a lighter hand. Try flavorful base malts or include a small portion of Munich to add depth without sacrificing crispness.

A hallmark of any IPA is drinkability, but high-octane examples based exclusively on malt are likely to finish with a sticky sweetness that distracts drinkers and judges from the intense hops character. Double IPAs, and even many standard-strength IPAs, may therefore benefit from substituting a simple sugar such as dextrose for some of the malt base—some of the highest-rated commercial double IPAs that the CB&B panel has reviewed use dextrose to achieve the desired level of alcohol without excess malt body.

The classic yeast for American IPA is the Chico strain, which is prized for its clean, seen-but-not-heard character. You can’t go wrong with Wyeast 1056, White Labs WLP001, or Safale US-05.

That said, beer judges are people, too. Objectivity is always the goal, but the reality of judging is that it’s easy for one citrusy, piney IPA to taste like the last citrusy, piney IPA. Offering the judges a unique experience that stands out from the rest of the flight automatically gives you a leg up. So consider using a more characterful American-ale yeast such as one of the increasingly popular New England strains. Conan, the best-known New England strain, is available as GY054 Vermont IPA from GigaYeast, as Vermont Ale from The Yeast Bay, or as WLP095 Burlington Ale from White Labs. ECY10 Old Newark Ale from East Coast Yeast could also be a good selection. It is supposedly the old Ballantine strain, presumably sourced before Sierra Nevada got hold of it.

Or let a British-ale strain have a go. Nick Arzner from Block 15 Brewing (Corvallis, Oregon) suggests that using an English ale yeast such as Wyeast 1098 can give your IPA a fuller body. Just make sure your chosen strain fully attenuates.

Water is a key ingredient that may very well put your IPA ahead of the pack. Brewers who depend upon extract for fermentable malt sugars needn’t worry about it as much as all-grain brewers, but even extract-based IPA can sometimes benefit from water additions to help the hops pop.

Don’t fly blind, though: If you don’t know what’s in your water to begin with, don’t mess with it. But if your water report indicates that you’re working with especially soft water, or if you need to start with reverse osmosis (RO) water, then consider using a water-chemistry tool such as Bru’n Water or the Mash Chemistry and Brewing Water Calculator at Brewer’s Friend. It may be that a bit of gypsum is all that’s needed to take your IPA from good to outstanding.

Dial in Your Process

The only mash you need for American IPA is the trusty single-temperature infusion mash, which is perfectly suited to the well-modified malts used to brew these hoppy styles. To improve attenuation, try mashing on the lower end of the typical range: 150°F (66°C) isn’t a bad place to start.

Boiling wort for a great American IPA need not be a complex affair, but as the number of hops additions increases, so does the risk of adding the wrong thing at the wrong time. Weigh out your hops into small bowls or cups and line them up in order with sticky notes or pieces of paper telling you exactly when each dose needs to go in.

IPA is best served fresh. You won’t have the benefit of aging time that might normally smooth out minor injuries incurred during fermentation, so it’s especially important to get fermentation right. Brewers of award-winning commercial styles emphasize the importance of pitching a large, well-oxygenated population of healthy yeast cells near the middle of the strain’s preferred temperature range. Slowly increasing the temperature after a couple of days helps promote attenuation and reduce diacetyl in the finished product.

Dry hops are added after fermentation and are generally chosen to complement the late kettle hops. But dry hops can also provide interesting contrast, so consider dividing your batch of IPA into several smaller volumes and dry hopping each version a little differently, from obvious to esoteric. You may just discover a combination that surprises and delights you.

You’ve put tremendous time and effort into brewing the perfect IPA: Don’t let a technicality disqualify your entry! Read and re-read the submission guidelines, and follow them to the letter. Most competitions require standard longneck bottles with no identifying marks, so keep that in mind.

Drop off your samples or ship them well in advance (not via the USPS: that’s a felony) so that they arrive at the judging site before the deadline. But once the bottles leave your hands, try to relax as you await your results.

If you win a medal, congratulations! But don’t be too hard on yourself if you don’t. Instead, read the judge’s comment sheets and take their suggestions to heart. Then go back to your recipe and try, try again. It may be that a few minor tweaks are all that stand between you and a gold medal.

Want more tips for brewing an awesome IPA? Discover how to build your own beer recipes from the ground up with CB&B’s online course, _Intro to Recipe Development. _Sign up today.

A guide to IPA styles