Noble hops may share names but each one is from a different region.

Wine enthusiasts understand the concept of terroir, the idea that the area in which a grape is grown is as important as the grape variety itself. It’s why Malbec does so well in Argentina and Sauvignon Blanc thrives in New Zealand. A New Zealand-grown Malbec may still taste great, but it won’t be the same as South American examples. Perhaps not surprisingly, the same principles apply to hops.

Noble hops are classic European varieties that are responsible for the signature flavors of pilsner and other Continental lagers. The four noble varieties are:

Having been cultivated in specific regions for hundreds of years, noble varieties express terroir much more apparently than cultivars with shorter histories. In fact, the names of the noble hops themselves are identical to the regions in which they were developed.

This can lead to some confusion. Take Tettnang, for example. Tettnang is the name of a town in the German state of Baden-Württemberg. It’s also the name of the hops variety that is grown in and around that town. In German, Tettnanger means something or someone from Tettnang, just as a Düsseldorfer comes from Düsseldorf and a Berliner from Berlin. So far, so good.

But Tettnanger hops are also grown in the Pacific Northwest of the United States. This variety was actually propagated from hops growing near Sankt Gallen, Switzerland, which is on the other side of Lake Constance from Tettnang, Germany. If you were to purchase American-grown Tettnanger when you actually wanted the true noble variety, you’d probably be disappointed.

To help distinguish the authentic varieties when they’re grown in their regions of origin, growers sometimes prefix the cultivar’s name with the area in which the hops were actually grown. So if a supplier carries both American Tettnang and Tettnanger Tettnang, then you know that the former is a Tettnang hops that has been grown in the United States, while the latter is a Tettnang hops grown in its birthplace.

The table below indicates the four classic noble hops, common names for the authentic landrace cultivars, and potentially confusing varieties that might be carelessly labeled. This isn’t to suggest that great beer can’t be made with these other varieties, but rather that you should know what you’re getting when you purchase hops. 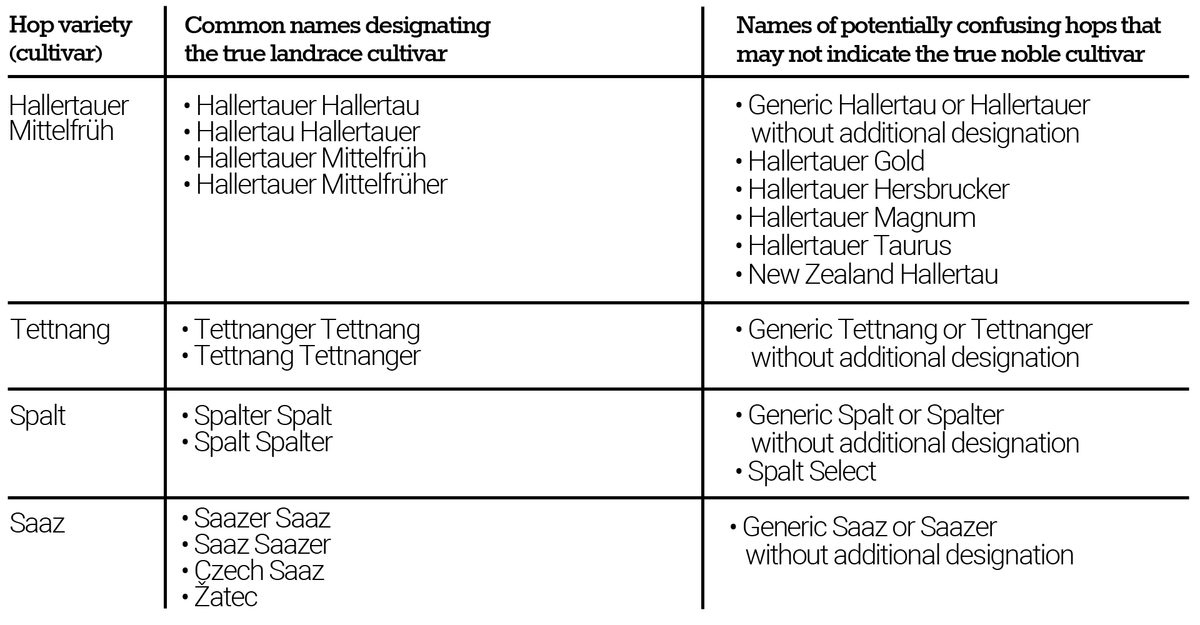 Don’t be afraid to drill your vendor. If you’re paying for noble hops, you should receive noble hops!

Homebrewers today enjoy a wider selection of malts than ever -- so wide, in fact, that it’s easy to become overwhelmed.