It began as a striking reaction to industrial beer before fading into near-obscurity. Drew Beechum tells the tale of brown ale and makes the case for brewing up a big, malty hug.

The American craft-beer movement started as an allergic reaction to the bland uniformity of mass-market pale lager. From that yellow sameness came a riot of flavors, aromas, and colors. But times and tastes have moved on, leaving some of our pioneer beers up in the attic, next to our dusty high-school trophies.

I can think of no style less deserving of the “chuck it in the bin with the eight-tracks” treatment than the classic brown ale.

With brown ale, there are a number of clarifications that need to be made because historically there have been countless variations. Before folks became obsessed with measuring, calculating, delineating, and marketing beer, brewers mostly talked about beer as a city/region, strength, and color. Brown is arguably the easiest beer color to make, so its manifestations have been many. Even inside the same brewing traditions, brewers have applied and reapplied the term “brown” to vast ranges of beer (the many styles of tiny Belgium’s brune or bruin being a case in point).

Instead of deciphering a few thousand years of poorly documented history, let’s focus on the past few decades—and specifically on the common British and American brown ales that we’ve come to know, love, and ignore.

From Mann’s to Nut Brown: The “Modern” British Beers

For all the care, research, and debate over historical British brewing records, the bits that seem to have sunk into the American consciousness are all about IPAs, pale ales, bitters, and maybe a porter or two. Why?

Perhaps it’s because of that lack of continuity in what’s been called a brown ale over time. These days, we typically see three things classed as British brown ales, and they are not that closely related. And no, I won’t go digging into the Pandora’s box of historical porter here—I’m not that brave.

The first, and arguably the oddest/realest British brown is Mann’s Brown Ale, brewed by Thomas Hardy Burtonwood. This is a dark, sweet, and low-alcohol beer—2.8 percent ABV. Even on my travels, I’ve never actually seen that creature in the glass.

The second is sessionable dark mild, typically under 4 percent ABV. These developed largely in the post-WWI period before slowly receding over time. Dark milds lean toward a light and highly drinkable body, the better to have more pints. (I would kill to formally establish May as “Mild Month,” to get folks on board for a pint or three, but there are only so many windmills at which I can tilt.)

The third is what I think of as “strong brown” or “double brown.” There are two primary commercial examples available here in the States. The first is Newcastle Brown Ale, which for most of its history was a blend of two beers. It dates from 1927, but it became influential for early U.S. microbrewers and enthusiasts due to its wide availability, thanks to an aggressive West Coast–focused import strategy. Since 2019, Heineken has brewed Newcastle for the United States at Lagunitas facilities around the country. (Huge shocker: It tastes completely different.)

The other example is more obscure, but I think it’s the more important one from an American brewing perspective—that would be Samuel Smith’s Nut Brown Ale. Imported into the States in the late 1970s by the influential importer Merchant Du Vin (run by Charles Finkel), the marketing, design, and pricing positioned Sam Smith’s as a premium product. Thus, it attracted plenty of attention in the fledgling “good beer” world. Sam Smith’s lineup included pale ale, IPA, porter, oatmeal stout, imperial stout, and a “nut brown” ale; you’d be forgiven for thinking you were seeing a brewpub lineup from the 1990s.

The legend of American craft is that it was a reaction to the uniformity of industrial pale lager. From a weird mishmash of Whole Earth Catalog DIY hippies and military vets looking to re-create their overseas beer experiences, there came a riot of flavors and colors.

Make no mistake: Color was important. For decades, the marketing battle had centered on the virtues of “golden” as the mark of “premium.” With copper, brown, and black beers, upstart brewers changed the framing and allowed a beer lover to really stand out. (You can see a similar effect with the “grammability” of the juicy IPAs.)

American brown’s heyday came in the 1990s, best exemplified by the second-best-selling craft beer—Pete’s Wicked Ale. The titular Pete, Pete Slosberg, took the flavors and experiences of Samuel Smith’s Nut Brown and Americanized it with a stronger dosing of hops and a drier edge. Other beers followed in its wake, such as Big Sky Moose Drool and Rogue Hazelnut Brown.

So, what was the appeal?

Aside from the color, it was the malt explosion—a rich flavor that didn’t overwhelm your palate. The interplay of flavors was appealing: chewy caramel malt, a hint of chocolate roast, and a lightly bitter bite of hops to wash it all away before the next sip. Some went for more assertive British yeast esters to give a fruity air to the beer, while others favored the malt and hops with cleaner-profile American yeasts. If all you knew about beer was that it was fizzy, yellow, and watery or weirdly bitter, then brown ale would be a revelation. (Side Note: I still firmly believe that porter, stout, and brown ale are the best beers to give to people who think they hate beer. If they like coffee or chocolate, they’ll find plenty to love.)

“Dark beer” was new. It was exciting. And just like everything else new and exciting, it eventually ceased to be that. Pete’s peaked in the late 1990s and held on through a long slow fade. American brown ale developed the same “stodgy old man” reputation that dogs mild ales.

American brown ale has, by and large, receded or else been crowded out by other styles. It’s rare to see them as core beers, though there are exceptions and a few stalwarts still lurking on tap lists. I really like Avery Ellie’s Brown, and—local to me—Figueroa Mountain’s Davy Brown. (Editor’s note: See also Rocket Frog’s Brewer’s Perspective and recipe for their award-winning flagship Wallops Island, pages 77–78.)

American brewers being who we are, there are also countless riffs on imperial brown ale (Firestone Walker Bravo is a beauty) and even brown IPA.

To Janet’s Brown, and to Tasty

And, in the homebrew world, there’s Janet’s Brown Ale. This is a strong, hop-forward American brown ale created by Mike “Tasty” McDole in homage to his late wife. A big but not unreasonable 7 percent ABV, Janet’s is stuffed with abundant hops and balanced by a hefty, but not cloying, malt presence. This has become a staple recipe in the homebrew world, and it’s even found purchase among professional brewers—such as Russian River (whose own Janet’s Brown scored a 96 with our blind tasting panel for this issue). 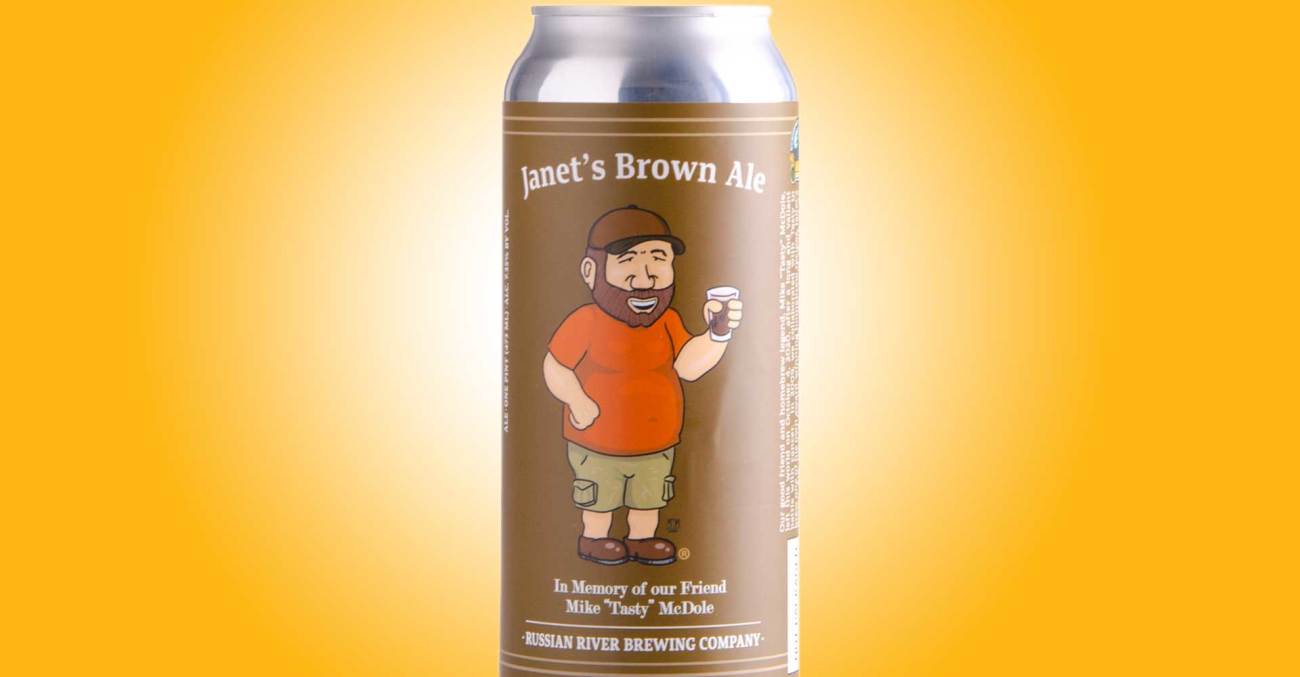 Russian River’s Vinnie Cilurzo recently fired up the kettles to make his ninth batch of Janet’s Brown Ale—but this time, sadly, in memory of Tasty himself, who passed away in October.

I asked Cilurzo for his thoughts on brown ales.

Like many of us 1990s “craft kids,” Cilurzo cut his teeth on the Anchors and Sierra Nevadas, but he says that he and wife and fellow brewery owner Natalie drank a ton of Pete’s Wicked Ale; it was fresh compared to the few British examples we could get. Despite having homebrewed them before going pro, he never really made one commercially until he began brewing Janet’s Brown with Tasty.

Cilurzo’s preferred approach to a brown ale layers in malt flavors from a blend of crystal and chocolate, to push from sweet caramel to slightly bitter toffee and finally to a dry chocolate with a firm bitterness. He combines midrange crystal malts (such as 40L) and chocolate malt to get that effect. If you’re worried about the complexity you’d get from just the two malts, you could always combine several crystal malts to boost complexity. Cilurzo makes a point to differentiate between crystal (drum roasted) and caramel (kilned at higher temperature) because he senses higher roast notes in the crystal, which he prefers for a brown ale.

There are two major differences between Tasty’s original recipe and the Russian River version. Russian River uses Simpsons Best Pale Malt for a solid foundation that lifts the specialty malt character. The other change is a shift in hops from the original Northern Brewer to Brewer’s Gold (an older hop that seems poised to make a comeback, thanks to recent hop research in “survivables,” i.e., compounds that thrive in hot-side additions).

As Cilurzo and I reminisced about the halcyon days of brown ales, we tried to dissect what happened, and the answer is pretty simple: hops. The craft drinker’s love of hops has simply crowded out many of our older styles. He says the way back to these lost styles is via our taprooms and brewpubs, “where consumers can get a taste of something to remind them how great something other than an IPA can be.”

I’m going to leave you with an exhortation: Give brown ales a chance. The blend of malts (and hops, in the American versions) comforts like a warm hug that doesn’t become awkward. And even if you’re an oddball brewer who rocks down to Flavor Town—as long as you’re not too ham-handed with your hop choices—you’ll discover a solid base on which to build your crazy ideas up to the sky.

Excellence in the Sublime: Brewing Blonde Ale with MadeWest

MadeWest Brewing in Ventura, California, won GABF gold in 2018 and silver in 2019 for its flagship blonde ale, Standard. Mike Morrison, cofounder and head brewer, sketches out its origins and lays out the schematics of this extraordinary ordinary beer.