Pair Holiday Cookies with Beer. Try Not to Hurt Yourself.

Apparently, it is National Cookie Day. Want to have a beer-and-cookies party? Our best advice: Look for comparable intensities of flavor (difficult), and don’t overdo it (impossible). Specific recommendations follow.

Trying to figure out which cookies taste good with which beers… Who does this? Only magazine editors, and publicists working for brewers and bakers, and whatever brewers or tasters who have been talked into playing along because it might grab likes on the socials. Special exceptions allowed for authors of food-beer pairing books (what a niche!), and brewery events people, and those who pay good money for tickets for the occasional tasting event—because, having been in pandemic mode for nine months, we have sepia-tinted fondness for all sorts of public events that aren’t happening right now.

But listen: Maybe more people should do this? You could do this. It’s fun. Why is it fun? Because beers, and because cookies.

Downsides: Inevitable bellyache, and the fairly high likelihood of unpleasant pairings along the way.

It’s probably worth it.

Before we get to our winning pairings, a brief explanation of how this came together: A publicist named Tori Allen reached out to us. She represents a few breweries as well as A Haute Cookies in Atlanta. She saw our recent masochistic experiments with Halloween candy and sent the kind of pitch that sounds fun and all but… Look, to be honest, people, this is your fault. A few years ago, we posted an apparently innocuous article about pairing beers with Girl Scout cookies, and you broke our site by clicking on it. Ever since, we have had a hard time resisting this kind of debauchery.

Just to make it harder on them, we asked the brewers not to choose their own beers for the pairings. If they did like me, then they grabbed some likely suspects and a few wild cards from their personal hoard to mix-and-match. It didn’t all work. We left out the duds.

“I’m not sure if it’s possible,” DiMatteo says, “but if I can make a living pairing delicious stout from amazing breweries and incredible cookies from A Haute, sign me up.”

Careful what you wish for, Todd. 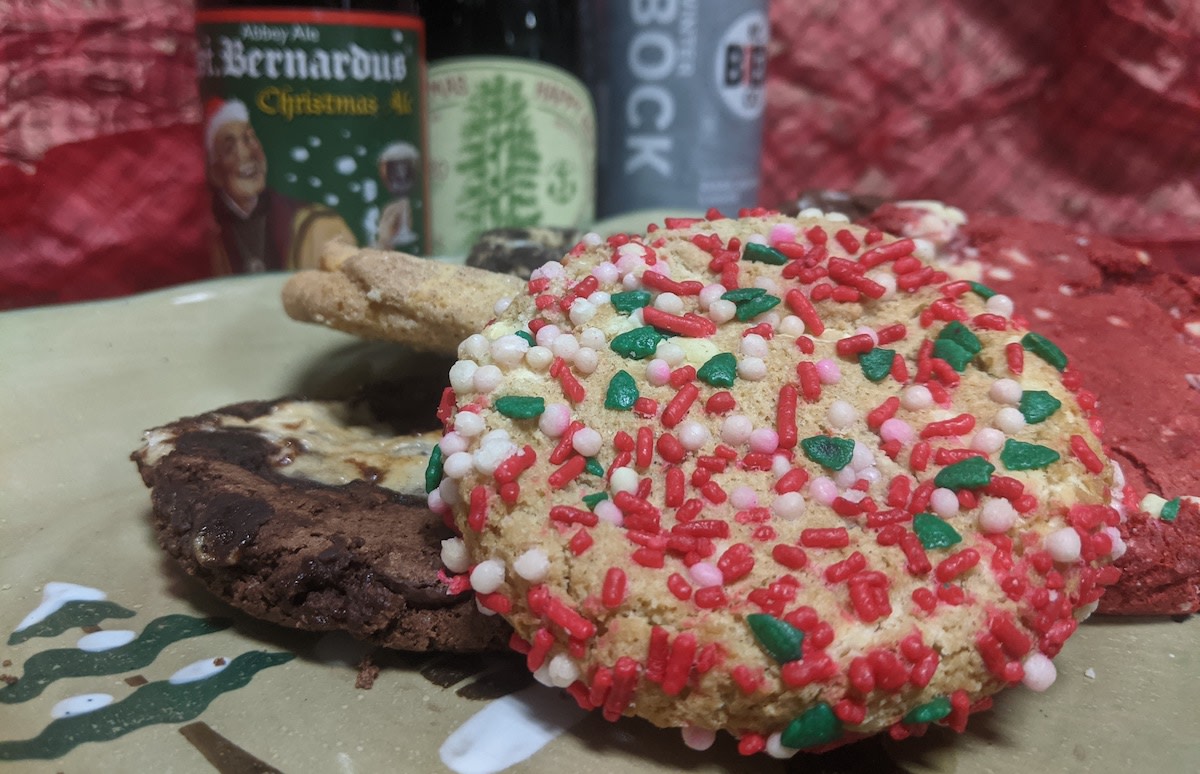 Your own available cookie and beer varieties will vary, but there are elements of these tastings that can be applied to whatever you’ve got. The most important thing with any beer-food pairing—we’ve had to re-learn this lesson often—is to look for comparable intensities. A flavor-bomb cookie is going to overwhelm a subtle beer, and vice versa, obscuring any flavor gestalts that your senses and imagination might otherwise discover.

Observations: Interesting that two hefeweizens and a dubbel with spicy yeast profile made the cut here.

Observations: Notably, two of us chose the same beer for this cookie without any coordination. The sugary sprinkles were a lot to handle; bubbles helped to break them down.

Observations: Look for roast in the beer to find affinity with the Oreo.

Observation: With a cookie this rich and fudgy, there was no apparent upper limit to how decadent the beer could be.

These bars are the grown-up version of the Samoa Girl Scout cookie, with chocolate drizzled over the porter caramel, toasted coconut, and a bed of sweet, buttery shortbread.