In this Learning Lab column, Jester Goldman gives his full attention to dark malt. Settle in as he helps you understand how these grains differ and what they can bring to your beer.

Our last lesson focused on different levels of crystal malt. Now we’ll turn to the dark side. If you want to brew a schwarzbier, a porter, a stout, or even a brown ale, you’ll need some dark roasted grains because 120°L crystal malt alone can’t get your beer to deep brown or black. Well, strictly speaking, it could if the crystal malt were about 20 percent of the grist, but the caramel character would be overwhelming. Dark-roasted grains solve the problem by packing more color into a smaller package.

As a general cut-off, we’ll look at roasted grains that are darker than 300°L. These fall into two main families, split between regular grains and “debittered” or “dehusked” grains. As you’d expect, roasted grain can add wonderful tones of coffee and chocolate, but if you overdo it, they can be bitter, acrid, and acidic. The tannins in the husk contribute a lot of those negative flavors, so debittered grains offer a way to pick up more color with less flavor intensity.

That trade-off means that debittered grains aren’t always the right choice. It’s also good to note that the acidic nature of dark grains can be helpful for dropping the pH of the mash in all-grain brewing. That’s less important today, given that water treatment can address this, but it explains some of the traditional beer styles of certain regions.

Here are the main roasted grains on which this lesson focuses:

Roast barley— I’ve been careful to say roasted grain rather than roasted malt because roast barley is made from unmalted grain. It adds a strong roasty character, similar to coffee. Typically, it’s 300–400°L, adding a reddish hue as it darkens the beer, but there are darker versions available. It’s best to limit this to 2–10 percent of the grist, with the higher end reserved for stouts.

Black patent malt— Also known as black malt, this is significantly darker than most roast barley, weighing in at 450–600°L. While it also has a dry, roasty flavor, higher percentages are perceived as burnt or ashy. Keeping it at less than 3 percent of the grist will rein that in and still pick up plenty of color. On the other hand, in a milk stout, you can kick this up a bit higher, with the sweetness balancing the harsh bite. Black malt works well in combination with chocolate malt.

Chocolate malt— Chocolate malt forms the backbone of most porter recipes, but it also works well in lighter styles, such as brown ale and British dark mild ale. Along with the taste of roasted coffee, it can add flavors of cocoa, dark chocolate, or nuts. It’s usually around 350°L, but there are dark chocolate versions that go up to 420–450°L. A good range in most recipes is 3–12 percent of the grist.

Carafa Special— This is actually a collection of three different dehusked dark-roast malts made by Weyermann, as distinct from their normal husked Carafa line. The Carafa Special I ranges from 300–375°L, the Carafa Special II is 415–450°L, and the Carafa Special III is 490–506°L. Each of these will provide a fine eclipsing shadow to your beer, with relatively mild roast and chocolate character. Weyermann recommends using them as 1–5 percent of the grist, but many people go as high as 10–12 percent.

Blackprinz malt— Briess has their own dehusked roast grains. Their Blackprinz malt is made from hulless barley roasted to 500°L, which provides a much milder alternative to black patent malt. They recommend 1–10 percent of the grist, with the lower end of the range adding mostly color, but the high end contributes light roast coffee or cocoa flavors.

Midnight Wheat malt— This is Briess’s other huskless roast grain. It’s a touch darker at 550°L and is advertised as even smoother than the Blackprinz malt.

Each of these grains has different recommended percentages, but 5 percent of the grain bill is a decent starting point for all but black patent.

Let the target style guide your choice of roasted grain; consider the degree and quality of roast, as well as the desired smoothness. Stouts call for darker roast character, so a blend of roast barley and maybe some black malt is appropriate. Porters tend to soften the roast character and focus more on cocoa-like flavors, so chocolate malt is a good way to go. Schwarzbier can rely on chocolate malt, but debittered malts such as Carafa III can hit the color without making it taste too much like a porter.

All-grain brewers often just add these dark grains to the mash, but the obvious path isn’t always the best. It’s true that dark beer styles gained the strongest foothold where the water has a higher percentage of carbonate, and dark grains’ acidity helped bring the mash pH into range. Between the quality of most tap water and the ease of adjusting your mash salts, that’s less of a selling point today.

The downside of mashing these grains is the likelihood of extracting bitter astringent tannins. Gordon Strong suggests mitigating this by adding dark grains late in the mash process, during the vorlauf.

On the other hand, this is where an extract-brewing technique offers a strong benefit. These grains don’t provide starch to convert, so steeping works just fine to get the character with the least risk of pulling in off-flavors. If you want to get the most out them, cold steeping offers the smoothest roasty character. All you need to do is let the grain steep in room-temperature water for up to 24 hours. At brew time, you just pull out the grain and add the roast tea to your boil kettle.

For this lesson, we look at two variables: grain selection and steeping technique. At a minimum, you should compare roast barley, black malt, chocolate malt, and Carafa Special II. For extra credit, you can do all of the grains, rounding out to the full set of Carafa Special malts and adding Blackprinz and Midnight Wheat. The second phase in this lesson will be to weigh hot steeping against cold steeping.

With the minimal set of grains, put together eight samples. For our previous experiments, we made 1-gallon (3.8 l) mini-batches of beer. In this case, a full batch of beer emphasizing each of these would take too much time and too many ingredients to make something that may not be that palatable. Instead, we’ll make solutions that are comparable to a couple of cups of coffee. 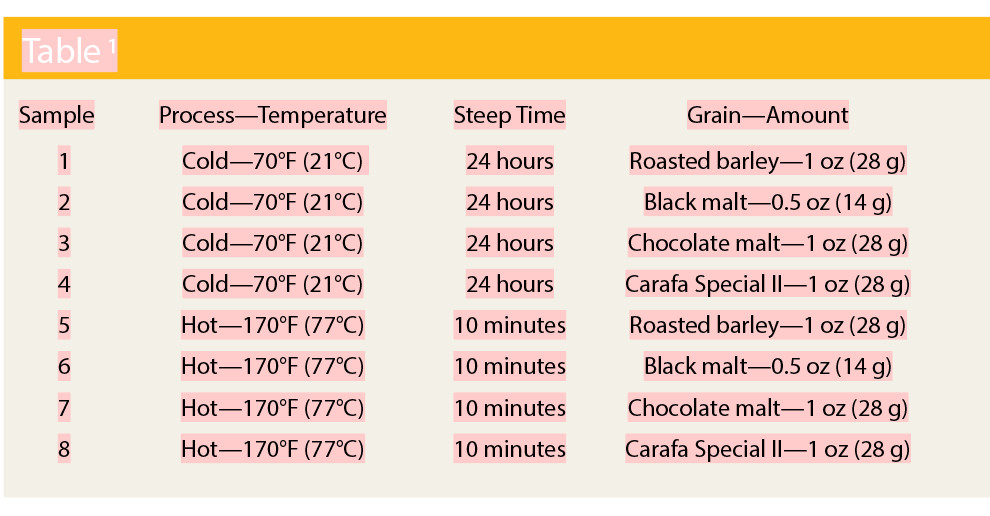 Table 1 outlines the process and steeping temperature; the steeping time; and the grain and the amount for each of the eight samples. For each sample, use 2 cups (470 ml) of water and 2 tsp (8 g) of sugar.

Note that most of the samples use 1 ounce (28 g) of grain, with black malt being the exception. Black patent can be quite harsh, and using less grain is better. If 0.5 oz (14 g) is overwhelming, it’s worth retrying with 0.25 oz (7 g). Also, each of the samples is sweetened slightly to soften any harshness and to simulate how the flavor would balance with some malt sweetness in a beer.

Complete the cold-steep batches before making the hot-steep ones to ensure that both are fresh. For samples 1–4, take the given amount of grain, crush it, and place it into a small nylon or muslin bag. Put the grain bag into 2 cups (470 ml) room-temperature water and let steep for a full day. Remove the grain bag from the water and add 2 tsp (8 g) sugar to the solution.

For samples 5–8, take the given amount of grain, crush it, and place it into a small nylon or muslin bag. Heat 2 cups (470 ml) water to 170°F (77°C), then steep the grain in the water for 10 minutes. Remove the grain bag from the water and add 2 tsp (8 g) sugar to the solution. Allow the solution to cool to room temperature. You can use a refrigerator to speed up the process.

Even though these aren’t beers, the evaluation session will parallel our earlier experiments. Remember the two variables and compare the different grains with each other and then contrast the cold-steeped samples with the hot-steeped ones. For each sample, take a quick initial whiff. Write down your impressions before taking a deeper sniff. Roasty coffee and chocolate aromas are obvious, but take your time to find more detailed associations. If it’s coffee, ask yourself whether it’s more like cappuccino or espresso, light roast or dark. Chocolate can be milk or dark or suggest cocoa or mocha. It might even be a little nutty. You might also pick up on burnt ashy notes or even a hint of smoke.

Follow up with a small sip. Does the taste just reflect the aroma, or are there more details? Which elements are strongest? The taste may also be relatively bitter or even acidic, although the light sweetness of the sugar may buffer that.

After you’ve written your observations, you’re ready move on to the next sample. Before you do, though, cleanse your palate. A little bread or cracker along with some water will clear your tongue, and you can clear your sinuses with some deep neutral breathing or by sniffing the inside of your elbow.

As you try each sample, you may find yourself noting the same characteristics across the grains. That’s fine, but pay attention to the balance and how the intensities compare. This is especially interesting when comparing cold steeping with hot steeping. For instance, when I contrasted the two chocolate-malt samples, they were very similar at first, but the cold-steeped one seemed smoother and more well-rounded. It took a few sips to identify that the acidity seemed lower in that one, which shifted my sense of the mocha character.

I highly recommend that you try the extra-credit assignment, at least with the Blackprinz and Midnight Wheat. That will round out your understanding of how these grains differ and what they can bring to your beer.

In the city of Middletown, New York, the line forms early outside of Equilibrium Brewery on weekends for fans jonesing for a hops fix. This is what happens when professionally trained scientists get involved in brewing.