Your Guide to Thiolized Yeast

We’ve spent the past several years at Omega Yeast digging deep into thiols: researching, brewing, and fermenting with the goal of bringing more tropical aromas to beer. We designed the Thiolized series—our four most thiol-expressive and versatile strains—for bolder, more tropical beers.

First off, what does “Thiolized” mean?

Thiols are highly impactful aromatic compounds that can evoke intense tropical, citrus character reminiscent of juicy passion fruit, pink guava, and freshly zested grapefruit peel. The term “Thiolized” refers to our engineered yeast strains that have the ability to biotransform the thiol precursors found in malt, hops, and grape-derived products into free thiols. Brewers can unleash these previously inaccessible tropical aromas into their beers simply by switching to a Thiolized yeast strain.

Select which Thiolized strains work best for you.

Tropical thiol aromas are a perfect addition to hazy IPAs, West Coast–style IPAs, and hoppy lagers. We have Thiolized yeast strains for each of these, but you can pick and choose how you want to add thiol aromas to any style.

We first introduced the Thiolized series in 2021 with Cosmic Punch, a Thiolized version of our British Ale V strain. Cosmic Punch is great for hazy beers with added nuances of grapefruit, passion fruit, and guava aromas. This is an excellent candidate for a hazy house strain, as its thiol output is versatile, complementing hop combinations without stealing the show.

With enhanced Thiolized capabilities, Helio Gazer boosts thiol biotransformation 200 times above sensory threshold and 20 times more than Cosmic Punch. Even in the juiciest of IPAs, expect distinctive guava and New Zealand sauvignon blanc–like aromas, along with the beloved haziness of its parent strain, British Ale V. This is our most thiol-forward hazy strain.

Star Party packs a huge punch of thiol aroma while maintaining the clean, reliable fermentation behavior of its parent strain, the renowned Chico ale strain (our West Coast Ale I). If you are looking for a fresh take on old-school West Coast IPAs, this one’s for you.

Lunar Crush is great for hop-forward lagers and is far from traditional. Expect crisp, snappy, and refreshing thiol aromas of grapefruit in conjunction with that lager drinkability. This strain offers a new approach to brewing lagers and the ability to bring thiol aromas to the forefront. 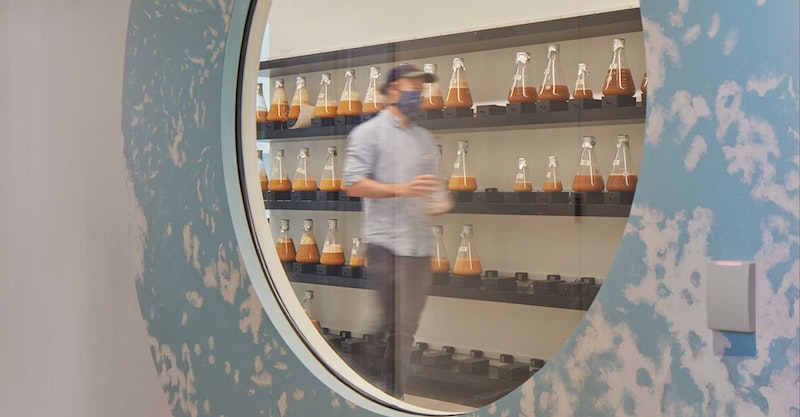 Some technical points when brewing with Thiolized yeast …

We’ve found that when it comes to maximizing thiols, the simplest approach is often the most effective. From a sensory standpoint, thiols are bolder and much more obvious in a blonde ale or lager recipe than they are in an IPA. This is because IPA recipes already have an intense layering of hop aromas. Brewing an IPA with Thiolized yeast leads to an added overall tropical sensory perception, rather than an isolated passion-fruit aroma. An analogy would be adding passion fruit to fruit punch to make tropical fruit punch.

To emphasize that defined passion-fruit aroma, pare down your recipe to a simplified grain bill with a majority barley base malt (wheat and oats have little, if any, thiol precursors). Try mash-hopping with varieties such as Cascade, Saaz, Calypso, or Motueka. Adding hops so early in the brewing process may seem counterintuitive, but it turns out that using hops in the mash is an efficient way to add thiol precursors from hops and get even more tropical aromas from Thiolized yeast. To avoid overpowering thiols with intense hop aromas, pull back on hopping rates in the whirlpool and dry hop.

As you can see, when it comes to thiols, sometimes less is significantly more.

When utilizing our Thiolized strains, you can reduce your hopping rates while still achieving big tropical flavors and aromas. Don’t forget that barley base malts carry the load when it comes to thiol precursors. Designing simpler, more efficient grain bills can maximize thiol output and yields. Perhaps most exciting: Playing around with new regional malts and hops supports local growers, but it also may provide rich sources of thiol precursors and thus a new perspective on terroir in beer.

How were these strains developed?

Traditional yeast strains are inefficient and mostly incapable of biotransforming thiol precursors in wort. Using CRISPR/Cas9, a genetic editing tool, we can enhance a yeast’s ability to unlock these thiols to their free, aroma-active state. With access to these thiol precursors, brewers can generate rich, tropical fruit–forward aromas in their beer in a way that hasn’t been available in the past.

In short, brewing beer just got a hell of a lot more interesting.