Behind the alluring façade of what appears to be a pious cathedral of traditional lager, discover the dogma-busting heresies of Wayfinder Beer in Portland, Oregon.

Their house yeast is a lager strain. The decoction kettle gets plenty of use. Kräusening and spunding here are routine matters. The walk-in is well stocked in Saaz, Hallertauer, and Tettnanger. They are beloved by local lagerheads for their Bavarian-style helles and Czech-style pils, poured with panache and gorgeous creamy foam from Czech side-pull faucets.

Yep, all the trappings are there—it must be a reverent house of traditional lager orthodoxy.

Get past that façade, though—then behind the curtain—and you’ll find that the narrative takes some turns. One of those side-pulls is pouring a hazy IPA. That decoction kettle is being used for something called “cold IPA”—with the grist of an American malt liquor, it’ll be dosed with lager yeast and later kräusened by a fresh batch of pils or helles wort.

At Wayfinder Beer in Portland, Oregon, tradition is not religion. In fact, there is no religion here—everything is fair game for critical thinking and scientific reason. It’s an approach that has led to acclaim from local brewers and drinkers, affirmation in the form of a Great American Beer Festival bronze medal for that helles, and multiple honors from the Oregon Beer Awards, among others.

“I think my atheism is one of the main reasons why I’m able to make beer like this because I don’t really hold anything that strong,” says Wayfinder Brewmaster Kevin Davey. “I like to challenge everything, every thought. So, I think that’s been really helpful in my scientific learning of all this stuff.”

That practical, probing process applies to a range of decisions at Wayfinder, such as why the Czech-style lagers get only one decoction, or why most of the lagers may get only three weeks of cold-conditioning time.

“Now, if you ask the Germans, the real traditional way of making a beer is, if you want to make a 12° Plato [OG 1.048] beer, then it’s one week later than 12,” Davey says. “So, a 12° Plato beer gets 13 weeks of lagering, total tank time. For us, for the rent that we’re paying, it’s completely unfeasible. We just can’t do it. If we could do it, I think that it would make wonderful beer. But the reason that they did that is, they were using pitch-lined barrels and sticking them into a cave. Underneath the brewery, they brought ice in from the lake just to keep the temperatures cool. We have glycol-chilled tanks! We can get our beer down to 29°F [-2°C]—much cooler than that cave could ever get.

“So, I personally think there’s some value in changing with the times.” 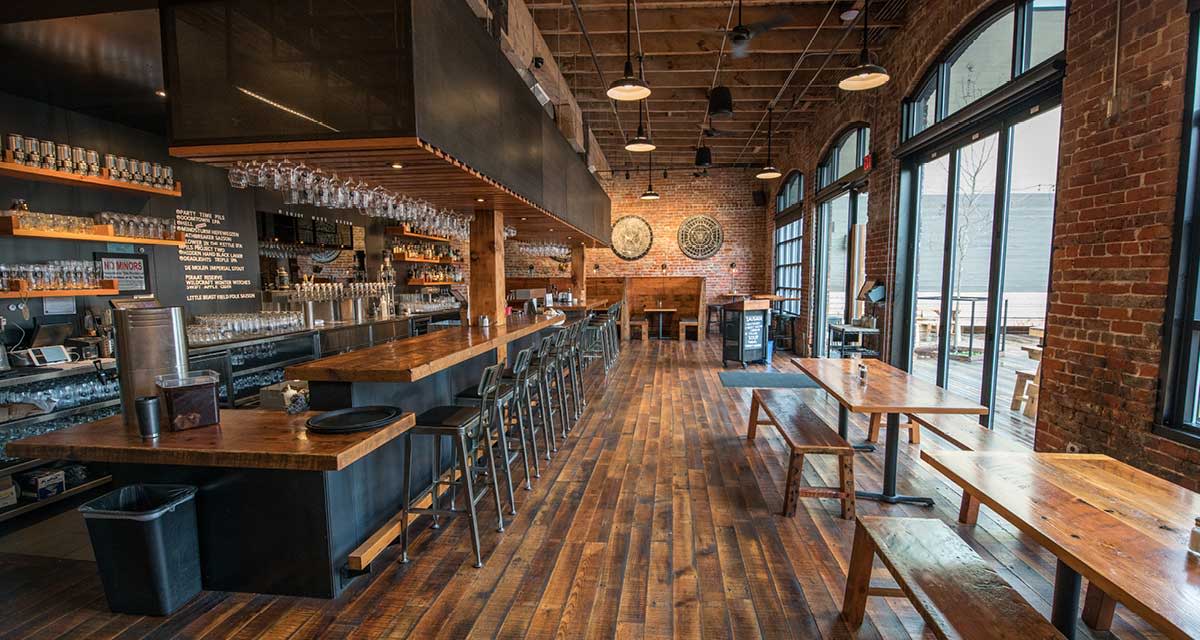 If you could cybernetically engineer a brewer with a career path specially equipped to make great lagers, you might end up with Kevin Davey. He was a plumber and homebrewer before he went in 2009 to the World Brewing Academy’s Master Brewer program, which includes study at Doemens in Munich. He got his brewing start at Chuckanut Brewery in Bellingham, Washington—winner of numerous GABF and World Beer Cup awards for its lagers, including several while Davey was there, plus the small brewery of the year honor in 2009 and 2011. “I think they’re probably the best lager brewery on the West Coast,” Davey says.

He went from there to be a production brewer at Firestone Walker for a year, while they built their German-style brewhouse. Then there was a stint as head brewer at Gordon Biersch in Seattle before coming to Portland when hired by Wayfinder’s cofounders: Charlie Devereux—previously of Double Mountain Brewery in Hood River, Oregon—and local restaurateurs Matthew Jacobson and Rodney Muirhead.

Even when Davey was homebrewing, he was into lager.

“I used to make my own beer because it was hard to find really well-made Belgian- and German-style beers at local craft breweries. You had to buy imports. So, I figured I’d just brew ’em. And I liked IPAs, but I could get some great IPAs in Seattle where I was living, so I usually didn’t brew them. I guess that’s where I got the bug for brewing helles and Dortmunders, pilsners, and stuff like that.”

Wayfinder opened in late 2016. Handsomely composed of dark wood, exposed brick, and long tables and benches, the brewery stretches out into 8,900 square feet of rehabbed warehouse space—a lot of room for people to sit, drink, eat, hang out. In the past, that was almost half of their business. This year’s pandemic lockdown hit them hard; they had to lay off almost all of their staff.

“We’re really down to about three employees,” Davey says. “It’s me and the kitchen manager and the restaurant manager.” There’s no food right now; those two colleagues have pivoted to the brewhouse. “We’re doing all the delivering and brewing and canning and everything.”

Wayfinder sold about 2,000 barrels of beer last year. About 80 percent of that was draft, and about half of that was sold over the counter, on premises. After lockdown, the brewery shifted to almost 100 percent cans. Distributors have been grateful for what they can get, and Wayfinder also has had success selling via Tavour, a retail platform that delivers beer to 25 states and counting.

Shifting from taproom-centric to all-retail means much lower profits, but Wayfinder has been more fortunate than most: Davey still can’t brew fast enough to meet demand. “Now we’re back to brewing just as much as we were before,” he says. “We might even grow this year. We’re actually trying to get some tanks together so we can expand the brewhouse because we’re selling every drop we can make.”

Normally the pub pours from 16 taps; six of those are Czech side-pulls. A few of the taps are set aside for cider and guest beers from respected colleagues. A typical tap list tends to include a gamut of traditional lager styles—helles, pils, Vienna, a couple of bocks, a Dortmunder, a rauchbier, and so on. Inevitably, it will also include a few IPAs. “We always have been a lager-centric brewery, Davey says. “But we’re in Portland, so about 50 percent of our total business is IPA.”

The list might also include special releases—such as this summer’s Cold Kush, a decocted hazy IPA brewed in collaboration with Portland’s Great Notion Brewing. It might also include Terrifica—another collaboration, this time with Heater Allen and Modern Times—a dry-hopped, Italian-style pilsner that Bloomberg News named one of its 11 best beers in America.

The brewhouse and bar.

Cold IPA, and other Heresies

One reason that Davey calls Relapse a “cold IPA” is that he doesn’t want to call it IPL, or India pale lager.

“When we opened, I wanted to make an IPA with the Wayfinder spin on it,” he says. “We were already making a NEIPA, and I wanted something that would drastically contrast with it—something for the West Coast clean-IPA fans to get behind.”

In profile, it’s more IPA than IPL, but its construction is totally unorthodox. Relapse gets plenty of citrus-forward hops—late-boil, whirlpool, dry-hop—while its grist is akin to malt liquor—pilsner and rice, including a cereal mash with decoction. It gets the favored house strain—W-34/70—but ferments warmer than a lager, generally at 65°F (18°C). When fermentation is almost done, it gets a dose of kräusen—fresh wort from a batch of helles or pils—at the same time it gets dry hops, a confluence that Davey says also leads to some biotransformation. That’s also when the beer is sealed up for spunding, to naturally self-carbonate before conditioning at colder temperatures.

“Trying the finished product, I was reluctant to call it an India pale lager,” Davey says. “I think that IPLs tend to be malty, caramelly IPAs, just fermented with a lager strain. Relapse is smoother, cleaner, and has some new- and old-school tricks up its sleeve. It’s a blending of styles. So, I call it a ‘cold IPA.’ Maybe I’m just trying to stick the image in your head of an ice-cold beer, but hoppy as f*ck.”

That image had enough appeal to directly inspire Mitch Steele of New Realm and Shaun O’Sullivan of 21st Amendment, who recently collaborated on a beer called Rice Cold IPA—fermented by a Mexican-style lager strain.

If you're a Craft Beer & Brewing Magazine® subscriber, follow the link for a homebrew-scale Wayfinder Relapse recipe from Wayfinder Brewmaster Kevin Davey.

For Davey, the bucking of categories and convention is not for the sake of rebellion. He has specific, hedonistic goals in mind.

Davey sees his cold IPAs as hybrids, not so different from the top-fermented lager beers of the Rhein region—altbier and kölsch—or steam beers, or even the clean lager-like fermentation you can get from the Chico strain.

“This is something that I think is more common in brewing, that maybe a lot of homebrewers don’t see as often,” Davey says. “A lot of lager yeasts are used at warm temperatures to make ales that you might not know of. There are a lot of ale yeasts out there that are fermented cold to make lagers that you might not have heard of. In particular, when people ferment Chico yeast very cold, it makes a lager style.”

For some brewers—who might see lagers as brewed with lager yeast and ales brewed with ale yeast, period—that concept may ask some Yoda-like unlearning of what they have learned. But Davey is less concerned with the scriptures than what produces the best results.

“Really, what drives us here is scientific reasoning,” he says. “We kind of preach to the rest of the people here that we’re not so much of a recipe-driven brewery; we’re more of a process-driven brewery.”

Orthodox or no, Wayfinder remains a lager geek’s dream.

“Yeah, totally! I mean, that’s what I am,” Davey says. “I’m just trying to make it a reality for the rest of the world.”