When you’re playing folk music or doing government work, it’s easy to embrace an ethos of “close enough” as being sufficient for most purposes. In brewing, the combination of an infusion mash and some melanoidin malt is often thought of as close enough to a traditional decoction mash for a lot of brewers. After all, today’s malts are well-modified, not under-modified as they were when Old World brewmasters developed the techniques of decoction mashing centuries ago. If many European breweries that formerly used decoction have long-since moved over to infusion mashes, why should we waste our time and energy on an outdated technique?

I certainly appreciate the approach of something being “close enough” when I’m playing horseshoes, and I imagine I’ll feel the same if I ever find myself lobbing live grenades at ravaging packs of feral hogs. But for brewers and drinkers who truly know the traditional styles of Bavaria and Bohemia—pilsner, bock, tmavé pivo, schwarzbier, hefeweizen, and others—there is no question. You can’t get there, at least not all the way, without a decoction mash.

“People who have been trained, judges or brewers, know the difference every time,” says Kristen England, head brewer at Bent Brewstillery in Roseville, Minnesota. He’s also an education liaison with the BJCP who has done extensive research into historic Old World beer styles. Decoction mashing, he says, works best with the traditional styles of Central Europe. “All Czech pale and dark lager,” he says. “German dark lagers, for sure. All weissbier, especially pale wheat.”

For Mark Dredge, author of the book A Brief History of Lager: 500 Years of the World’s Favourite Beer, decoction provides two clear differences: taste and mouthfeel.

“For me, decoction is like an amplification of the malts,” Dredge says. “It makes them richer, fuller, toastier, almost a little chewy, and it gives some extra texture to the beer.”

While a fuller body and richer flavor should be enough to justify its use, the greatest proponents of decoction give it even more credit. Pour a beer into a Czech brewing scientist, and she’ll hold forth for hours, reciting benefits of decoction that most of us have never considered—backed up by scientific papers most of us can’t read, since they’re generally written in Czech or German.

Dimethyl sulfate (DMS) and acetaldehyde? Lower with decoction, higher with infusion, in both green and finished beers, both of which also improve in direct relation to the number of decoctions, according to a 2005 paper by researchers at Pilsner Urquell. That paper also credits decoction with improving bitterness, cold-break content, sedimentation, and soluble nitrogen.

Spend time in cities such as Prague or Pilsen, and you’ll hear brewers claim that decoction raises brewhouse efficiency, bumps up hop isomerization, boosts wort clarity, increases head retention, and improves pretty much everything up to and including life expectancy, blood pressure, and self-esteem.

While there are scores of traditional decoction mashing schedules, England especially recommends the hochkurz technique—from the German words for “high” and “short”—for homebrewers.

“Hochkurz is a standard decoction, just set up faster,” England says. “It works really well for pale lagers and weissbier.”

This approach skips the protein rest with a standard infusion mash starting at 144°F (62°C) for 30 to 45 minutes. To hit the next rest, pull about a third of the mash to a separate pot, boil for 5 minutes, and then return it to the main mash until you bring it up to the target temperature of 160–162°F (71–72°C). After holding the main mash at that temperature for 30 to 45 minutes, another decoction of the same size is pulled and boiled for 5 minutes, returning to bring the main mash up to mash out at 170–172°F (77–78°C).

Other decoction techniques depend on the equipment in use. England notes that brewers who can directly heat their mash tuns might try the kesselmaische technique, employing an infusion mash that starts with a protein rest at 122°F (50°C) for 10 minutes, followed by directly heating the mash up to 142°F (61°C). At this point, the thin, liquid portion of the mash—roughly 20 percent—is pulled out and held at temperature while the thick mash itself is boiled as a decoction for 10 to 30 minutes. The thin part of the mash is then added back to mash tun for a saccharification rest at about 162°F (72°C) for 30 minutes before continuing to mash out.

In the United Kingdom, Rob Gallagher is the chairperson of the British homebrewing group London Amateur Brewers. He’s also a fan of decoction mashing. For his own award-winning beers, Gallagher uses an all-in-one electric brewing system, generally boiling his decoctions in a separate pot on the stove.

“I’ve got a big ladle, and I just hoick out the right amount into a big aluminum pot,” he explains. “It’s only about a third.” Generally, he boils his decoctions for only about five minutes. He recommends keeping a careful eye on both temperature and the bottom of the decoction pot. “You might need to experiment and find the right boiler or heat setting so you don’t scorch it.”

Gallagher likes to make sure the decoction is slightly thicker than the mash as a whole, as in many traditional German decoction schedules, draining off some of the wort from the grain when scooping it out with the ladle. If he’s doing more than one decoction, he makes the first one thicker and the next one slightly thinner.

While it’s easy enough to do a decoction on the stove, Gallagher notes that all-in-one electric systems like his can also work, with a bit of ingenuity on the part of the brewer.

“One good trick I think is if people have these all-in-one, Grainfather-style brew kits, you can actually do a single decoction inside the Grainfather itself without needing a separate pot,” he says.

Similar to the kesselmaische technique, this approach involves mashing in with roughly two-thirds of the total grain and about half the normal amount of water. The brewer then runs through a normal brewing session with that setup, including the normal temperature rests, all the way up to the sparge. “And then instead of doing the equivalent of the sparge, you bring the whole thing to a boil,” he says. “Then you put in the rest of the water and the rest of the grain. If you’ve done it right, it should come out to about 60 degrees [140°F]. You go to your normal rests, whatever they are, your low saccharification and high saccharification and mash out. And then you pull the grain out and go through the normal sparging and boiling process.” 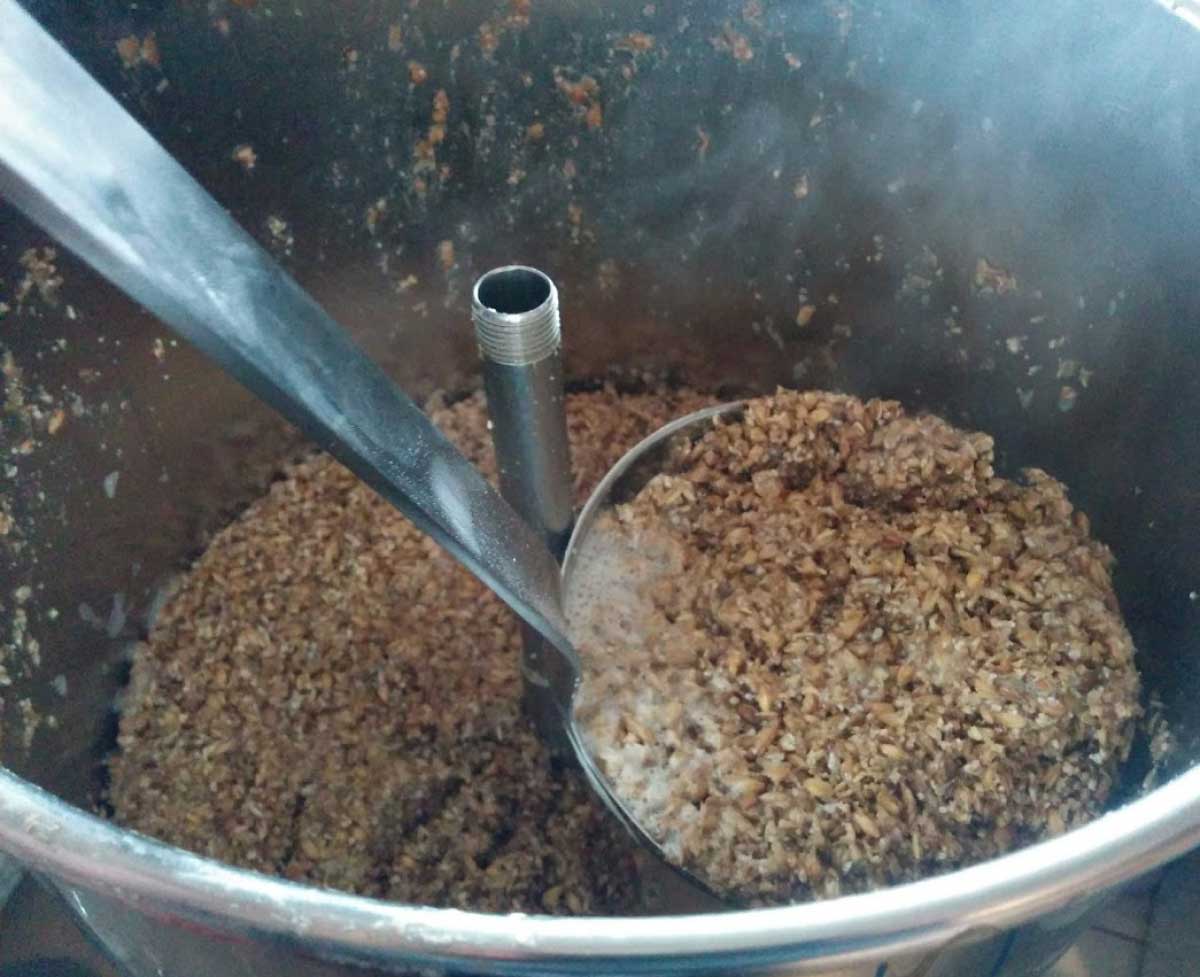 Rob Gallagher has found decoctions compatible even with all-in-one electric brewing systems, and ladles out about a third of the mash into a separate pot on his stove, where he boils for just five minutes, being extra careful not to scorch it. He aims for a thickness slightly thicker than the mash itself, draining off some of the wort while he scoops. If he’s doing more than one decoction, he makes the first thicker and the second slightly thinner. Photo: Rob Gallagher

While decoction is a key component of the taste and mouthfeel of many Central European beers, it’s not the only influence. England notes that the impact of a decoction mash varies with the yeast used, the fermentation vessel, and other traditional techniques, ingredients, and equipment used by brewers in the region.

“A lot of their process also ties into the depth of their flavor, the yeast contribution, and time of lagering,” England says. “If you aren’t fermenting your pale lagers open—and by pale lagers I mean the German type—I haven’t found as great of a difference.”

While decoction is best-known for its use in styles such as pale lager and hefeweizen, some brewers have used it effectively for other beers. England recommends trying a decoction mash with many malt-forward styles that are commonly brewed with infusion, including Belgian witbier, Baltic porter, dark mild, Scottish light ale, and Grodziskie.

Among other beers, Gallagher says that he has used decoction effectively in a best bitter. “It actually came out quite nice,” he says. “Really full, really malty.”

While the technique is uncommon for many, decoction is still universal enough in Central Europe that brewers there use it for almost everything, from traditional recipes to modern craft styles. Though Gallagher lives and brews in London, his partner is from the Czech Republic, a connection that has given him lots of experience tasting the region’s traditional, decoction-mashed beers—as well as a few oddballs.

“There’s a brewery out where my partner is from, Bylnice,” he says, referring to a town close to the Czech Republic’s border with Slovakia. “They do an IPA that I really like, and I think that’s decocted. It’s not like an American IPA. It actually tastes Czech.”