Cooking with Beer: Spondue (& You)

In which we ride an unhealthy fascination with melted cheese to a wild-beer frontier ... because nobody’s ever thought to combine beer and cheese, right? (Well, maybe not like this.) Prepare yourselves for a new portmanteau.

Here on the Third Coast, we wrap ourselves in luxuriant layers of cheese to forge through the bitterly cold winters. Sometimes, there’s sausage. It’s about as much fun as you can have during the time of year when you’re flinging around handfuls of rock salt and defrosting pipes with upsetting intensity and frequency.

A year or so ago, we two industry friends—Jenny at Dovetail Brewery, John at Revolution Brewing—combined our loves of beer, cheese, winter, and hucksterism to host a one-day fondue-and-sausage popup at Dovetail. But BrewSKI wasn’t just any Midwestern Fondue Brigadoon—we tapped the knowledge of Dovetail’s cellar team to build a fondue entirely around the character of their lambic-style beers. We called it spondue because if there’s one thing we love more than cheese, it’s a good portmanteau.

Dovetail brews spontaneously fermented beers in the Senne Valley tradition. Twice a year, in the fall and in the spring, when the weather is not too hot and not too cold, they brew a beer made with pale malt, unmalted wheat, and aged hops. They deploy the Belgian method of turbid mashing before sending the wort to spend the night in a coolship before it’s pumped into oak barrels to mature for at least a year.

Each barrel contains its own microcosm of flavors—some are funkier than others, evoking those classic lambic-tasting descriptors of “barnyard” and “horse blanket,” while others may have expressive pineapple flavors—and they’re blended to produce beers that hit all the notes.

For our spondue night, we selected a single, more acidic-tasting barrel. For one thing, the prickly acidity is a foil for the creamy and fatty flavors of cheese. For another thing—and this is really cool—the lower pH of lambic-style or other acidic beers helps to create an emulsion, so you can enjoy a silky-smooth fondue. While you probably won’t be able to select your own still lambic from a single barrel (but hey, good for you if you can), you can easily create your own spondue at home, with a lambic or lambic-style beer taking the place of the dry white wine.

For the rest of the recipe, it’s pretty much what’s been enjoyed in Alpine chalets forever—a garlic clove cut lengthwise, and then rubbed inside a heavy pot and discarded; one pound of a Swiss- or French-inspired cheese (or get weird, there are no rules); cornstarch or citrate to stabilize and thicken; a squeeze of lemon; and salt and pepper to taste. (Optionally, you can also add a little booze, such as a cognac, to fortify it.)

Do experiment with different beers and cheeses … or try one of our variations. 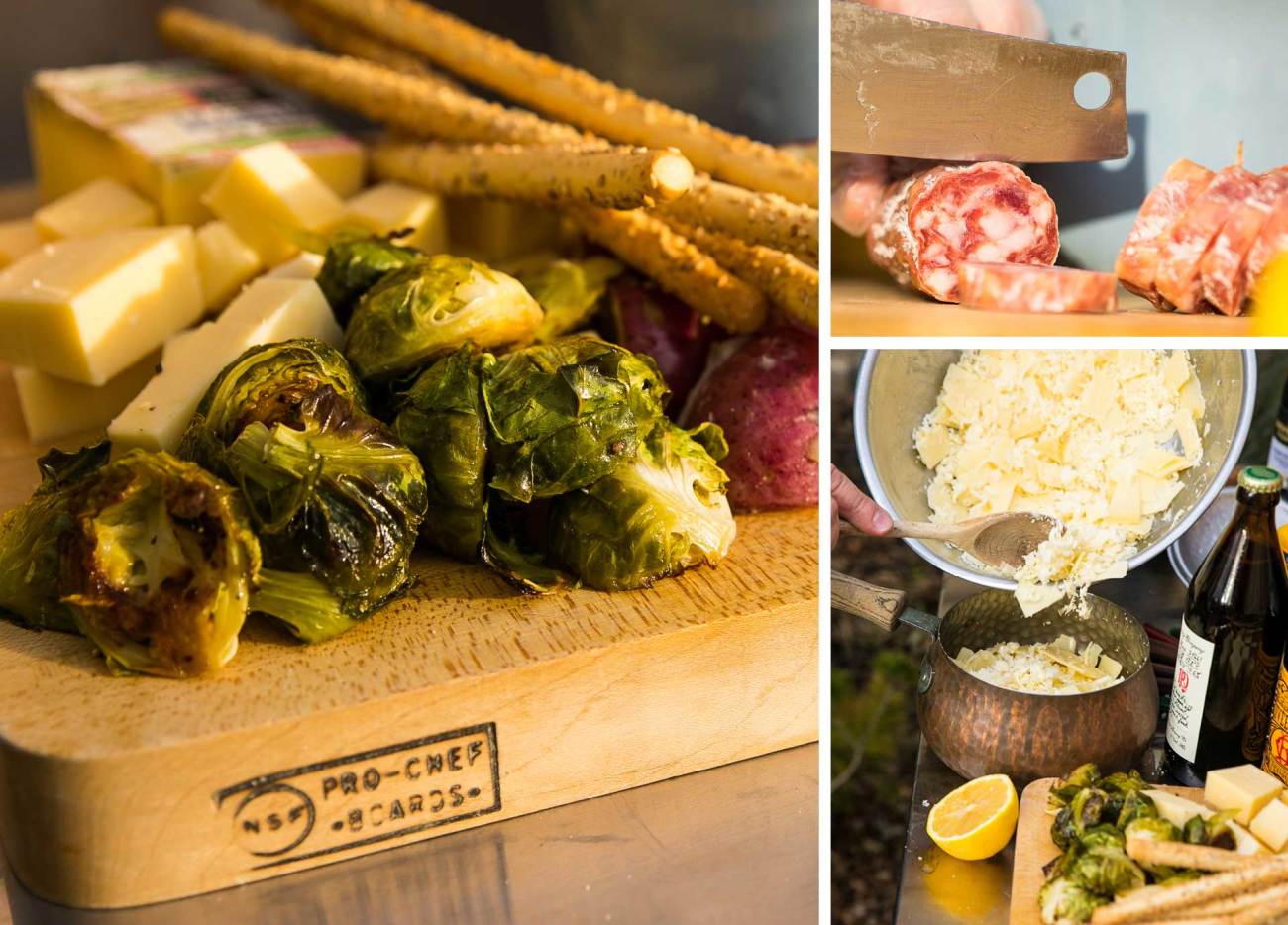 In this recipe, Dovetail’s spontaneously fermented Kriek—made with 2,000 lb (907 kg) of Michigan-grown Balaton cherries—takes the place of both the white wine and the occasional splash of kirsch (cherry schnapps) that sometimes goes into Swiss-style fondues. Bessie’s Blend is a super-melty, slightly nutty, mixed-milk cheese, with notes of sweet cream to complement the tart cherry flavors. (About the name: If Wisconsin is the left mitten, then Michigan is the right mitten.)

Rub the inside of a heavy pot with the garlic clove and discard. Combine the cheese with the beer, cornstarch, and lemon juice in the pot. Cook over moderate heat, stirring until the cheese becomes creamy and smooth. Season with pepper and salt and serve immediately.

Boon’s Black Label is about as classic as it comes when it comes to gueuze—a three-year blend of straw, oak, and funk, it’s a thinker that finishes bone-dry From the Trappist monastery that also makes some fairly decent beers, Chimay Autumn is a grassy, creamy, nutty washed-rind cheese that makes its way to the States via Trader Joe’s. This spondue showcases the bright apricot notes of the Black Label, forming a mariage parfait with the cheese’s buttery and meaty notes. Add the rind to this fondue for some extra funk!

Rub the inside of a heavy pot with the garlic clove and discard. Combine the cheeses with the Black Label, cornstarch, and lemon juice in the pot. Cook over moderate heat, stirring until the cheese becomes creamy and smooth. Season with pepper and salt and serve immediately.

Winter is also when we find ourselves awash in fancy cheese baskets from distant relatives, who may be hoping to assuage their guilt over the emotional walls they put up earlier in life. Sometimes it’s pears, which is still a pretty good fondue side. What we’re ultimately saying is that fondue could be the first step toward emotional healing in your clan, too.

Bring the beer to a simmer in a medium saucepan. Toss the citrate with the cheese and add to the beer bit by bit, whisking throughout. Stir in the garlic and return to a slow simmer. Serve with crusty bread just warm enough that you grab it off of a stone in your 400°F (204°C) oven and go “AHH! AHH!,” but ultimately your hand is fine. 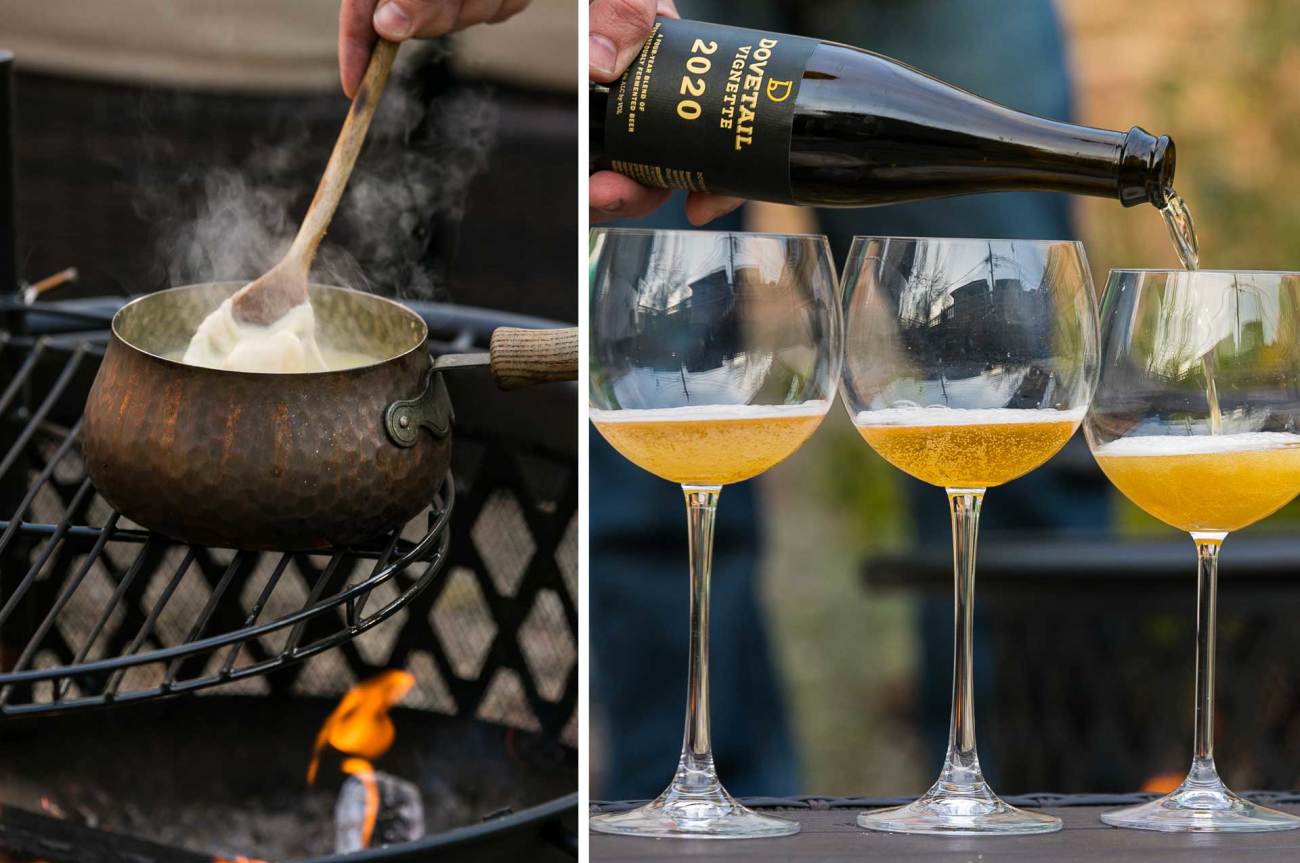 Cheese doesn’t have to be heavy. Okay, it kind of does, but the single-minded focus on melty cheese as an edible Alpine sweater does sort of obscure some of the brighter flavors one can incorporate into a multipart cheese dish. So, we took one very cool mixed-fermentation beer—brewed with pineapple, cinnamon, coriander, long peppercorns, and grains of paradise—and built a cheesy delight that offers flavors you might not expect in your dippable fromage. Frankly, the chemistry between bright, spicy pepper and tropical fruit is one unmatched outside the Cash/Carter continuum. We think you’ll agree.

Heat the oil in an 8-inch (20 cm) cast-iron pan and cook the onions 10–12 minutes, until soft and starting to color. Add the chopped chiles and stir. Add the beer and toss the Manchego (or asadero) with the citrate. Add the cheeses bit by bit, removing from the heat when they’re just incorporated and beginning to simmer. Keep warm in an oven and serve with good fresh tortillas. 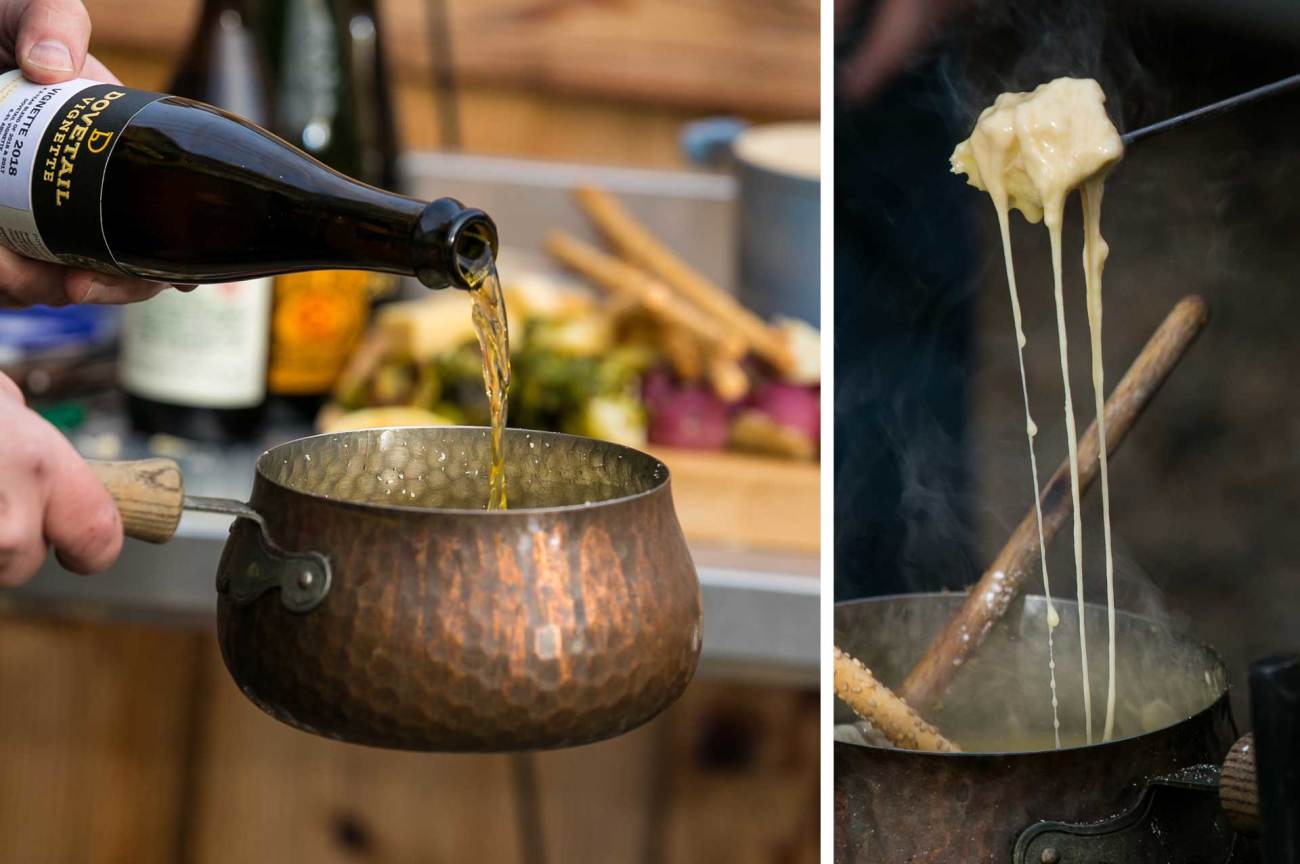 Goat to Have It

We keep bees on the roof at Revolution Brewing. They’re literally the only permanent residents, though brewer Matty Kemp comes close. Along with honey for our beers and brewpub, they produce enough that we sell small jars of their labor. This goat-cheese fondue, finished with the continually fascinating Neon series of fruited, mixed-culture sour beers from our neighbors at Hopewell Brewing, focuses on the bright, fresh, fruity flavors of the region. This is the perfect opportunity to incorporate your favorite goat cheese from down the road.

Heat the beer and cream together and add the goat cheese, stirring until consistent. Stir in the honey, taste for seasoning, and add a pinch of salt and/or pepper to finish. Serve with those fancy crackers that are expensive enough to temporarily raise your self-esteem but not expensive enough to spur regret later.