Grouse Malting packages their gluten-free malted grain in weights suitable for both home and commercial brewers.

Grouse Malting and Roasting Company is one of just a few craft-malting companies in the United States. And it’s one of an even smaller number of malting companies devoted exclusively to gluten-free malts. Twila Henley’s entire operation is certified gluten-free, from the malting floor where seeds are sprouted to the repurposed coffee roaster where specialty malts are roasted. In a world where celiac sufferers have to exercise constant vigilance, this is a sanctuary of gluten-free splendor.

Like so many similar enterprises, Henley’s start-up was inspired by a medical diagnosis. But Grouse Malting and Roasting Company has grown into something much more comprehensive. It’s not just about making beer available to those who previously couldn’t enjoy it. It’s about supplying brewers of all sizes with flavorful malts from long-neglected grain varieties that just happen to be gluten-free.

Wheat, barley, and rye contain gluten, and any beer brewed with these grains will have, at some point along the way, contained a great deal of the stuff. Although craft brewers are developing enzymatic approaches that virtually eliminate gluten from traditionally brewed beers, these gluten-reduced products can’t carry the gluten-free label at present.

But not all grain is glutinous, and starting with a naturally gluten-free grain ensures that the end product is itself safe for celiacs. Write down all of the grains you can think of, and more of them are probably gluten-free than not: oats, maize (corn), rice, millet, buckwheat, sorghum, teff, triticale, quinoa, and amaranth contain no gluten whatsoever. And yet, for centuries, brewers have relied almost exclusively on barley, wheat, and rye for beer. But there’s no reason this need be the case. 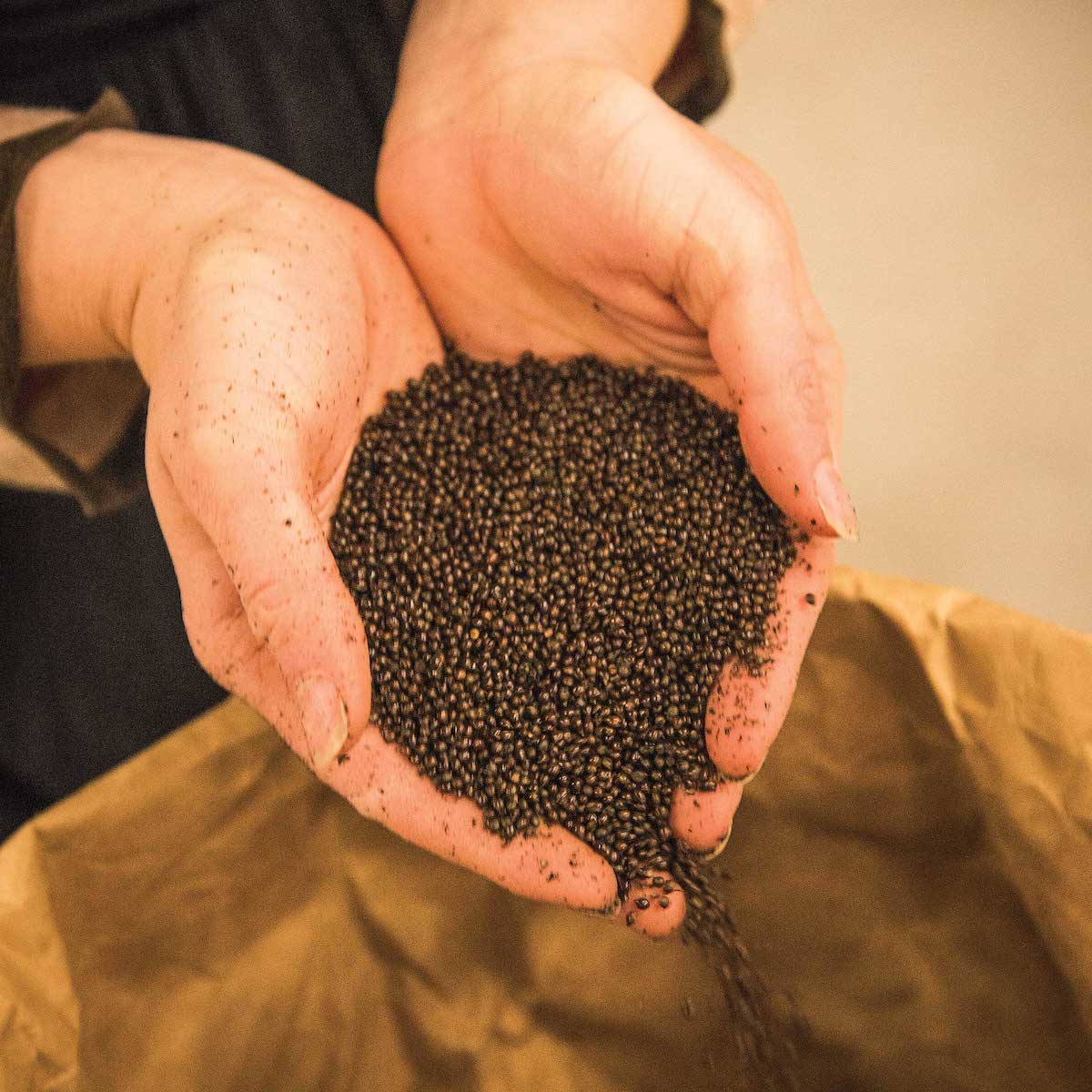 In malting, a seed—any kind of seed—is encouraged to germinate but denied the opportunity to grow into a full-fledged plant. As it sprouts, the seed develops the enzymes that it needs to access the starchy, nutrient-rich endosperm. Once the would-be seedling has reached a certain level of maturity, the maltster heats the grain, stopping it in its tracks, thus making those starches and enzymes available to a brewer, who will turn it into beer. 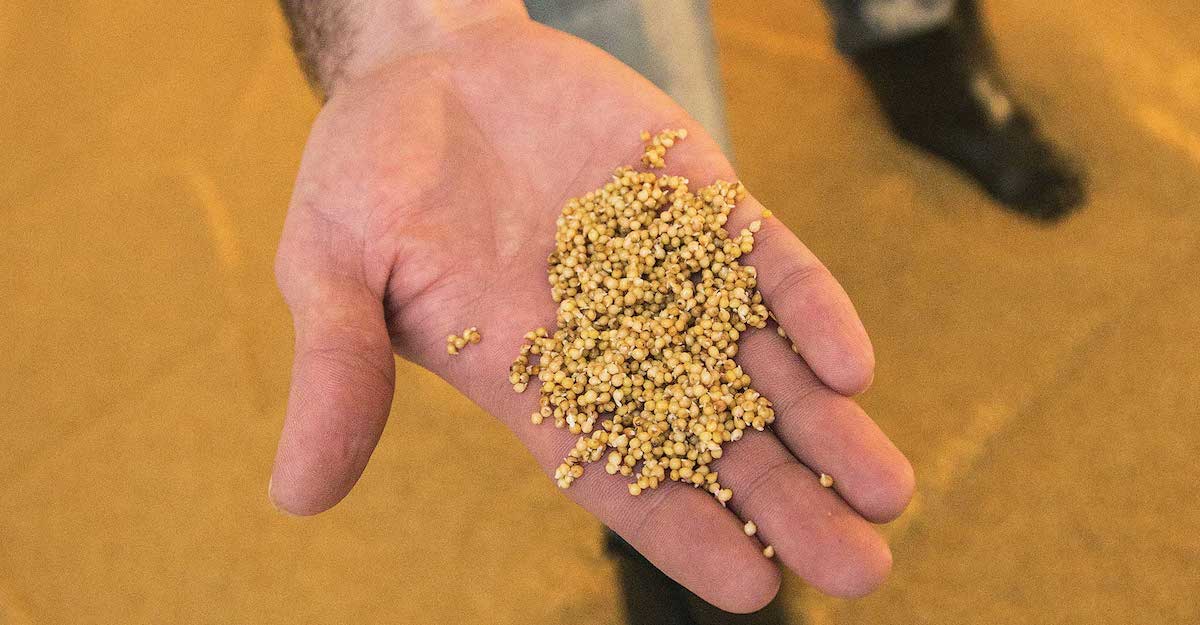 Gluten-free malts are just like traditional barley, wheat, and rye malts—they just happen to be made from other grains. But unlike traditional brewing grains, millet, buckwheat, rice, and sorghum haven’t been selectively bred over the centuries for performance in the malthouse and brewhouse (though Henley and others are working on this). So making malt from them requires a shift in perspective.

“Millet and buckwheat generally need warmer germination temperatures and less time,” says Henley. Millet seeds are also much smaller than barley kernels, so equipment often has to be modified or custom built. And unlike barley and wheat, which are available in both winter and spring varieties, millet grows but once a year. This means farmers have to wait until the soil is warm enough to support it.

Fortunately for brewers, maltsters and maltstresses such as Henley take care of most of these challenges before the grains are packaged, and when a sack of gluten-free malt is opened at the brewery, it’s ready to be used just like barley.
Well, almost.

Whether we’re talking barley or buckwheat, the enzymes a-amylase and b-amylase do the heavy lifting. These enzymes convert malt starches into the sugars that yeast will ultimately ferment into ethanol and carbon dioxide. But amylase enzymes can do their jobs only if the starch has been properly gelatinized. Gelatinization is the process by which starch granules are dissolved in water and made available for enzymatic activity.

Barley’s starch gelatinization temperature is less than 140°F (60°C). This simple fact means that when one mashes in for starch conversion at 140–160°F (60–66°C), as one does in a single infusion mash, the barley starches are automatically gelatinized and made available to a- and b-amylase.

Starches in millet and buckwheat, however, gelatinize at considerably higher temperatures. In fact, the starch gelatinization temperatures for buckwheat and millet (see Table 1, below) are well above the optimal temperatures for a- and b-amylase activity, 150–160°F (66–71°C) and 130–150°F (54–66°C), respectively. 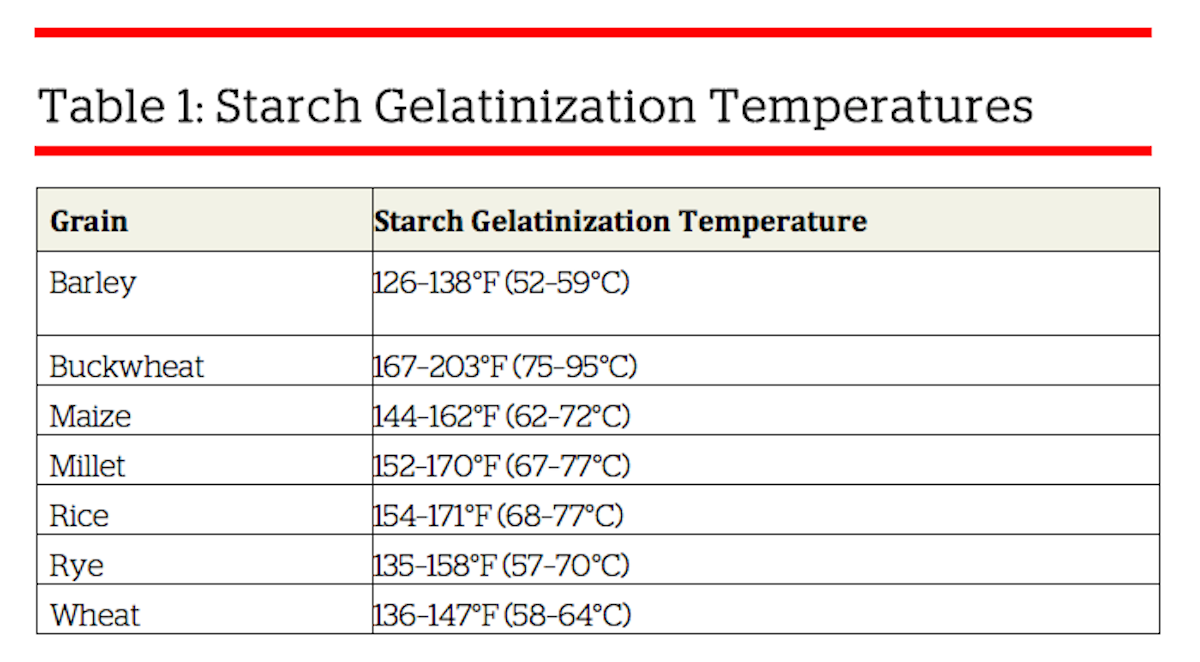 Fortunately, though, amylase enzymes are not binary entities that occupy on or off states. They’re smooth bell curves, more like dimmers than light switches. When we say that a-amylase works best within a temperature range of 150–160°F (66–71°C), what we mean is that this is its sweet spot. It’s still functional outside that range, just less active. What this means for brewers is that working with a grain such as millet requires mashing longer and warmer.

“A 90–120 minute single infusion mash at 163°F (73°C) works well for millet,” says Henley. “Grouse and New Belgium used this mash for a millet-based beer we showcased at last year’s Craft Brewers Conference, and we didn’t need any lautering aids like rice hulls.”

Want to get the most from your grain, gluten-free or otherwise? Sign up for CB&B’s Advanced All-Grain Methods online class and take your all-grain brew day to the next level.

A Bright Future for Alternative Grains

The millet- and buckwheat-based saison and brown ale I sampled at Grouse were flavorful and complex (see the Banjo Brown Ale Recipe). But unlike some underwhelming syrup-based beers, these fresh examples could proudly stand on their own next to traditionally brewed styles. They’re part of an exciting new family of beers made from innovative malts that individuals such as Twila Henley are infusing into the craft-beer Zeitgeist.

Indeed, Henley has been instrumental in the formation of the Craft Malting Guild, an association of small-scale malting companies who bring personal attention and care to every batch of malt they sell. With a renewed focus on long-neglected grains such as buckwheat and millet, brewers of all sizes can draw from an ever-expanding palette of malts to craft unique beers that satisfy every palate.

Taking beer back to its historical roots