Malt: The Soul of Beer

Without malt, beer would be lifeless and flat. Hops bitterness only works in balance with malt sweetness, and yeast requires sugars and nutrients for fermentation, both of which malt-based wort offers. Here's a malt primer.

Twenty-five years ago, Prof. Dr. Anton Piendl of the Technical University of Munich’s renowned Brewing Science and Beverage Technology program at Weihenstephan observed, “Malt is the soul, hops the spice, yeast the spirit, and water the body of beer.” Maltless beer would be an astringent, one-dimensional shell of itself. To study malt, then, is to peer deeply into beer’s very being.

Malt is simply a cereal seed that has been tricked into thinking it is about to grow into a plant and then abruptly denied the opportunity to do so. Mother Nature packs raw grains full of all the nutrients and enzymes a newborn plant needs before it grows old enough to photosynthesize its own food. Malting makes those nutrients and enzymes available to brewers. Just about any cereal grain can be malted, but some are better suited to brewing than others.

If malt is the soul of beer, then barley must surely be the élan vital, the qi, the aura. More than any other grain, barley means beer. Barley’s morphology and biochemical constitution make it the ideal brewer’s grain.

Without barley, there would be no beer. Sure, we would certainly brew other grain-based fermented beverages such as sake and chicha (Homo sapiens possesses an unquenchable thirst to turn things into alcohol), but we wouldn’t have beer as we know it.

German brewers love to go on about the Reinheitsgebot, the famous Bavarian beer purity law of 1516. What they fail to mention is that this decree had as much to do with the price of bread as it did the drinking experience. Wheat and rye were in such demand for brewing that bakers were left with little choice but to raise prices. Declaring wheat and rye verboten to brewers was a price-control wolf in a quality-assurance sheep’s clothing.

Barley may take center position on the Olympic podium of malt, but wheat and rye flank it on the left and right. Wheat has long enjoyed celebrity status in Bavarian Weißbier, Berliner Weisse, Belgian wit, and American wheat ale. Rye has recently gained prominence in American craft ales and lagers alike.

Malted wheat and rye are high in protein and lack outer husks, promoting gumminess (think oatmeal) in the mash, difficulty in lautering, and haze in the final beer. They follow their own malting schedules and require a deft hand in the brewhouse. But the rewards are great for those who choose to work with them.

Almost any cereal grain can be malted: oats, maize (corn), spelt, millet, triticale, and even buckwheat. But for diastatic purposes (a malt’s ability to convert starches to sugars), barley, wheat, and rye reign supreme. With the notable exception of gluten-free beers, other cereal grains are almost always combined with barley.

The conversion of raw grain to malt is achieved in stages. Every malt house has its own unique process, but the general idea is the same across the board.

A series of steep-dry cycles hydrates the raw barley, activates the enzymes within the grain, and prompts the kernels to sprout new seedlings. Maltsters alternate these cycles every eight hours or so for one to two days, or until chits (small rootlets) begin to emerge from the kernels. The moisture content of each barleycorn more than triples during this stage.

Germination is the process during which grain seeds hastily prepare to develop into plants. Acrospires (shoots) begin to grow lengthwise within the kernels, and the chits continue to develop and lengthen. At the same time, enzymes begin to degrade the seed’s internal starches and proteins, nutrients that would normally support a developing plant. This rapid growth generates enough heat that the maltster must turn the grain to aerate and cool it. Such turning also prevents the rootlets from binding the sprouts together into an unmanageable mass.

The germination process lasts several days, up to a week, until the acrospire has grown to nearly the length of the grain kernel itself. At this point, the grain is referred to as green malt, and its germination must be stopped.

Kilning halts germination with a combination of heat and air. Hot air is drawn through the green malt to evaporate moisture and preserve the diastatic enzymes, which are crucial to starch conversion when the brewer conducts a mash. When the moisture content of the malt has fallen to acceptable levels, the maltster increases the temperature of the hot air to cure the malt. Different curing temperatures yield different kinds of malt.

When the malt has reached the desired color and moisture level, kilning ends, and the basic malting process is complete. But maltsters have other tricks up their sleeves to create the myriad malt varieties available to today’s brewers.

Keep up with the latest trends in craft beer and homebrewing with a subscription to Craft Beer & Brewing Magazine®. Subscribe today so you don't miss Issue 7 (June/July 2015) with its focus on wild and sour beers!

Malts are generally categorized according to their color and function. In the United States, color is measured in degrees Lovibond (°L). The darker the malt, the higher the Lovibond rating.

Malts are also classified according to the roles they play. Base malts, caramel and crystal malts, and roasted malts offer brewers unlimited ways in which to build up a wort.

Base malts form the canvas upon which brewers paint the malt character of a beer. Some base malts are neutral, while others supply their own distinctive flavors and aromas. Base malts must be mashed and, in fact, they supply the enzymes necessary to convert mash starches to fermentable sugars. All beer recipes are built on a foundation of base malt.

Pilsner malt is the lightest malt available and serves as the backbone for most beer styles of Continental European origin. Pilsner malt lends delicate grainy or bready notes to light-colored beers and serves the same role as pale malt in most German, Czech, and Belgian styles. Typical color is 1–2°L.

Munich and Vienna malts are highly kilned malts that offer intense, chewy malty flavors. Some of these may be used for up to 100 percent of a beer’s malt bill, but extended kilning reduces the diastatic potential of darker varieties, which are more commonly combined with other base malts. Look for them in Oktoberfest, Bock, and other malty German styles. Color can range from 4–20°L.

Six-row malt has been the grain of choice for mass-market lager brewers and has rarely been used in craft beer. You may come across 6-row in recipes for a pre-Prohibition pilsner or light American lager, but it has been otherwise fairly obscure until very recently (see “Craft Malt: Taking Beer Back to Its Historical Roots” for one craft malthouse that is successfully making 6-row barley its main product). Six-row malt has a rough, husky quality and high diastatic power, which is why it is often cut with adjuncts such as rice and maize. Six-row is similar in color to Pilsner malt, less than 2°L.

Some base malts—especially those from the British Isles—are identified by their specific cultivar of barley. While Maris Otter and Golden Promise are the most common, you might also come across such varieties as Halcyon, Optic, and Pipkin.

Caramel and crystal malts supply a wide variety of flavors to beer, ranging from subtle biscuit and toffee to dark plum and raisin. To produce these specialty malts, the malster skips the kilning stage and instead diverts green, moist malt to a roasting chamber.

In the roaster, the malt is heated to mash temperatures, and alpha- and beta-amylase enzymes convert the starchy endosperms to sugars—essentially pre-mashing the malt within its husk. The longer the malt is heated, the darker and more intensely these sugars caramelize, yielding the wide range of caramel malts available to today’s brewers.

These specialty malts are frequently confusing to the beginning homebrewer because of the many trademarked names that maltsters assign their proprietary products. All caramel/crystal malts are, however, named according to color. The chart below indicates the relative colors of different types of caramel and crystal malts, although flavors vary considerably from one maltster to another. 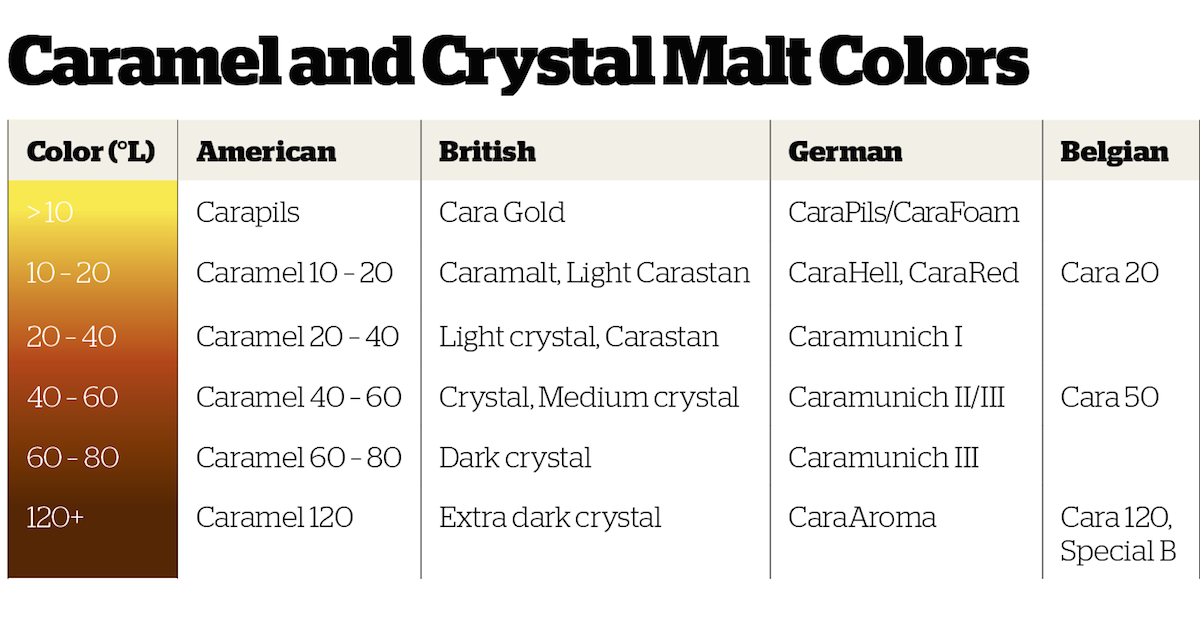 Maltsters can also roast malt, much as one might roast coffee. Roasted malts go through the entire process, all the way through kilning, but these malts are then further kilned at a high temperature or for longer periods of time to yield roasted qualities. These can range from the subtle to the severe.

Chocolate malt contains no chocolate whatsoever, but its flavor and color are reminiscent of dark baker’s chocolate, hence the name. It’s available in a range of colors from 180–450°L.

Roasted barley isn’t malt at all but rather raw barley that has been roasted. It supplies the signature roast flavor of Irish stouts such as Guinness and Murphy’s. When the English taxed beer according to the amount of malt it contained, the Irish got around it by using roasted raw barley for flavor.

The world of malt is varied, complex, and sometimes confusing. But it’s always interesting and always flavorful. Great malt in the hands of a skilled brewer can make ordinary beer sing.

From Pilsner to pale and crystal to chocolate, good malt makes good beer. And that is most certainly good for the soul.